Since we moved house, my hubby has been banging on about needing a new shower head. You think about these things but often never get around to it. He managed to do up our entire bathroom before though! When we were approached to review an Ecocamel Orbit Shower Head hubby was very keen. In fact keen enough to write the review for me!

Since this review was published back in 2017, we still have our Orbit Shower Head and have had no issues since. We are hoping to re-do our bathroom in the years to come and will be keeping or upgrading our Ecocamel Orbit. It’s so important to have a good shower head to ensure you really have the best shower experience.

Ecocamel shower head use novel technology to create an awesome showering experience but uses less water. Air is forced into the water stream mixing with the water causing turbulence. This increases the pressure inside the shower head to provide the same pressure as a conventional shower but as stated, uses less water.  This has been rigorously tested to prove the water savings.  This is better for the environment and saves you some pennies.

We were sent the Ecocamel Orbit Shower head to review. The picture below illustrates some of the specifications.

I’ll now hand over to my hubby to write the review!

Shopping for a new shower head is generally an activity that doesn’t enter one’s regular habits, but if you ever have to do it, I can assure you it is a massive pain in the bum. You are generally met with a ream of plumbing related numbers that are pretty much meaningless.

On the flip side, if you have a good shower, it can be a daily zen-like experience (or is that just me?). Getting sent one to try was a joy!

On first appearances, the thing that struck me the most about Ecocamel Orbit Shower Head is the fact that there’s a massive hole in the middle. The shower head is, however, reassuringly heavy (regardless of the hole). But I do tend to describe this product as the shower head with a hole! 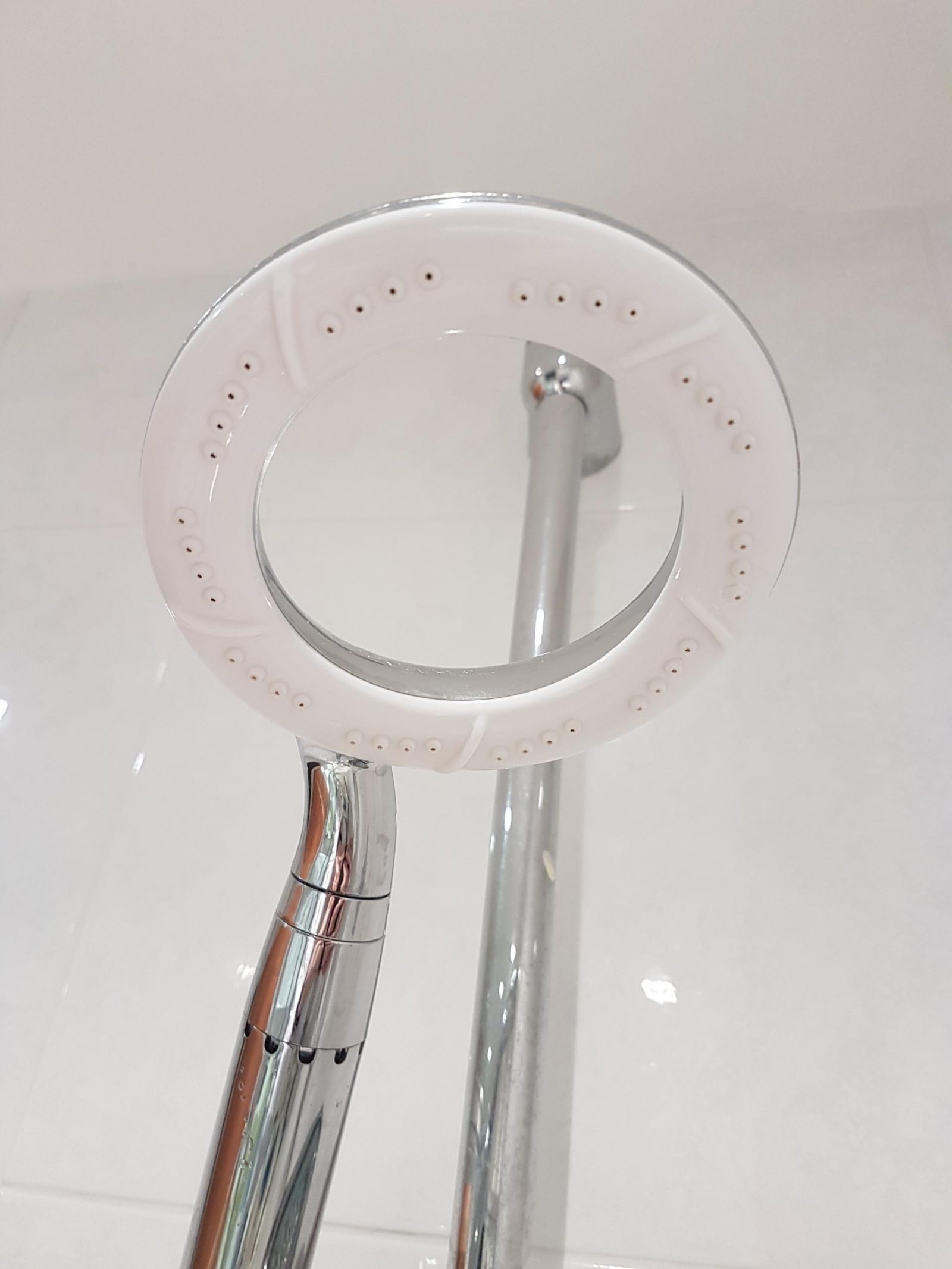 The head is of a standard size, so fitting it will literally take seconds.

As I was intrigued by this product, I thought I’d give it a test drive straight away, and I was impressed. You get a great water flow and a nice wide and even water spread.

A key thing about the shower head is that it uses less water, but not to the detriment of the “experience”. I directly compared it to my existing showerhead, and it uses about 25% less water. It does this by pulling in air and mixing it with the water, making it feel like there is a lot more water being sprayed out.  What that means is that your bills will be less. If you have a family that showers a lot, then your bills we be a lot less! 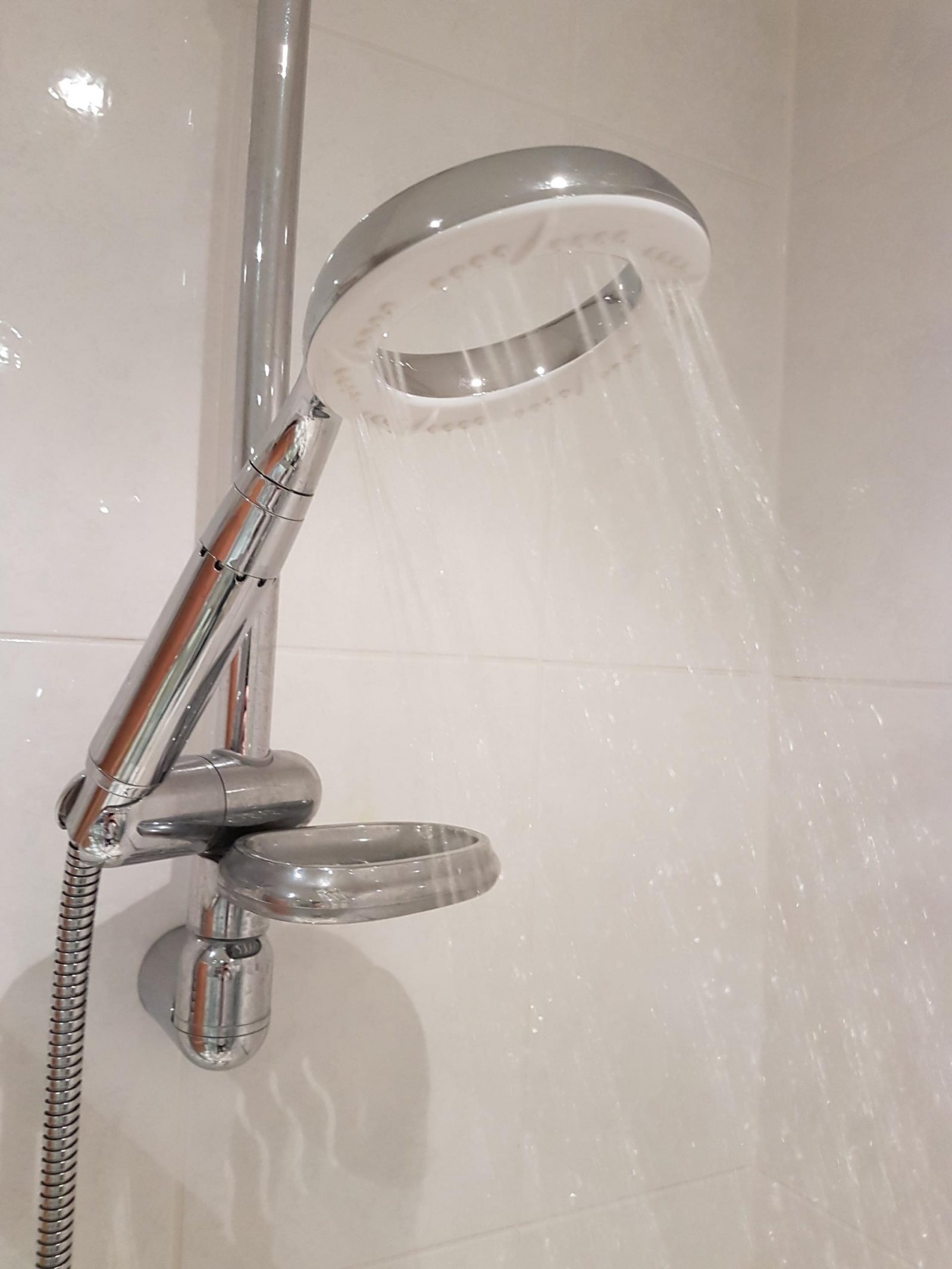 There are some technical things that you will have note: I used this on a power-shower feed from my hot water tank. The flow rate has to be great enough for the shower head to work effectively. I’d expect most showers to work with this, except electric showers and gravity fed non-power showers. Either way, you would need to check your shower’s flow rate to see if this shower head is suitable.

There are a couple of down points of this head, which I had also better mention.

It is a bit noisier due to the air intake… but it isn’t that bad.

You can’t adjust the head e.g. you get one spray type and that’s it. I never mess around with that either, so not too much of a concern for me.

So, I’d recommend giving this a try. You get a great cleaning experience and you also are kinder to the environment!

Disclosure – we were sent the shower head to review free of charge. All thoughts and opinions are our own.