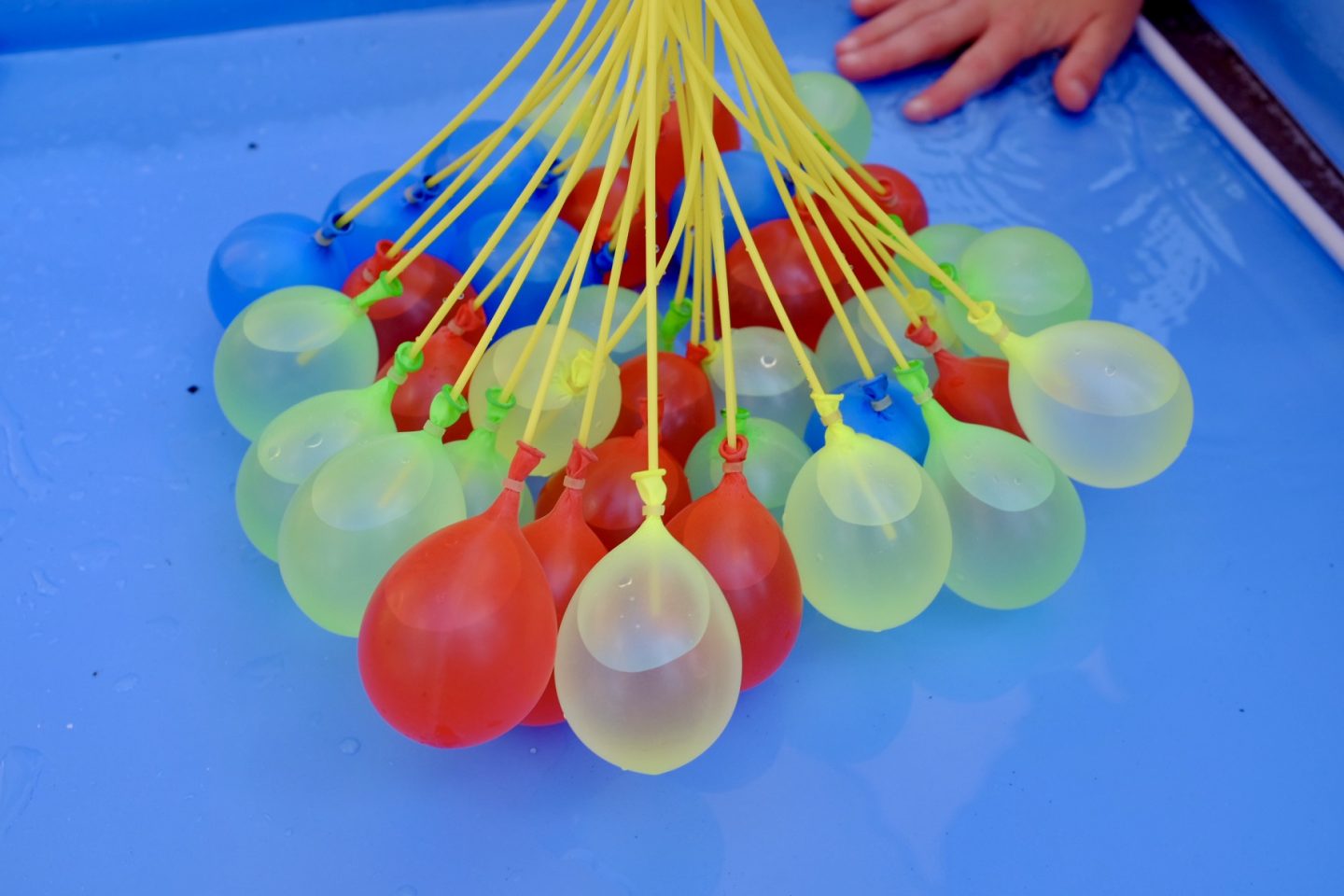 The weather has finally picked up! Finally! We recently had a really awesome half-term, spending our time with family and friends but what really made it was some water play. I’m a total big kid at heart and love joining in with the kid’s games. Water fights were quite a big part of my childhood, as my childminder used to let us have them during the summer holidays. We used to bring our swimming costumes and she brought out the water guns and water bombs. We used to get soaked and usually to the point where we had enough! So we were completely thrilled to be sent a huge bundle of goodies from the Bunch OBalloons from Zuru Toys. There were literally squeals of delight and not just from the kids! 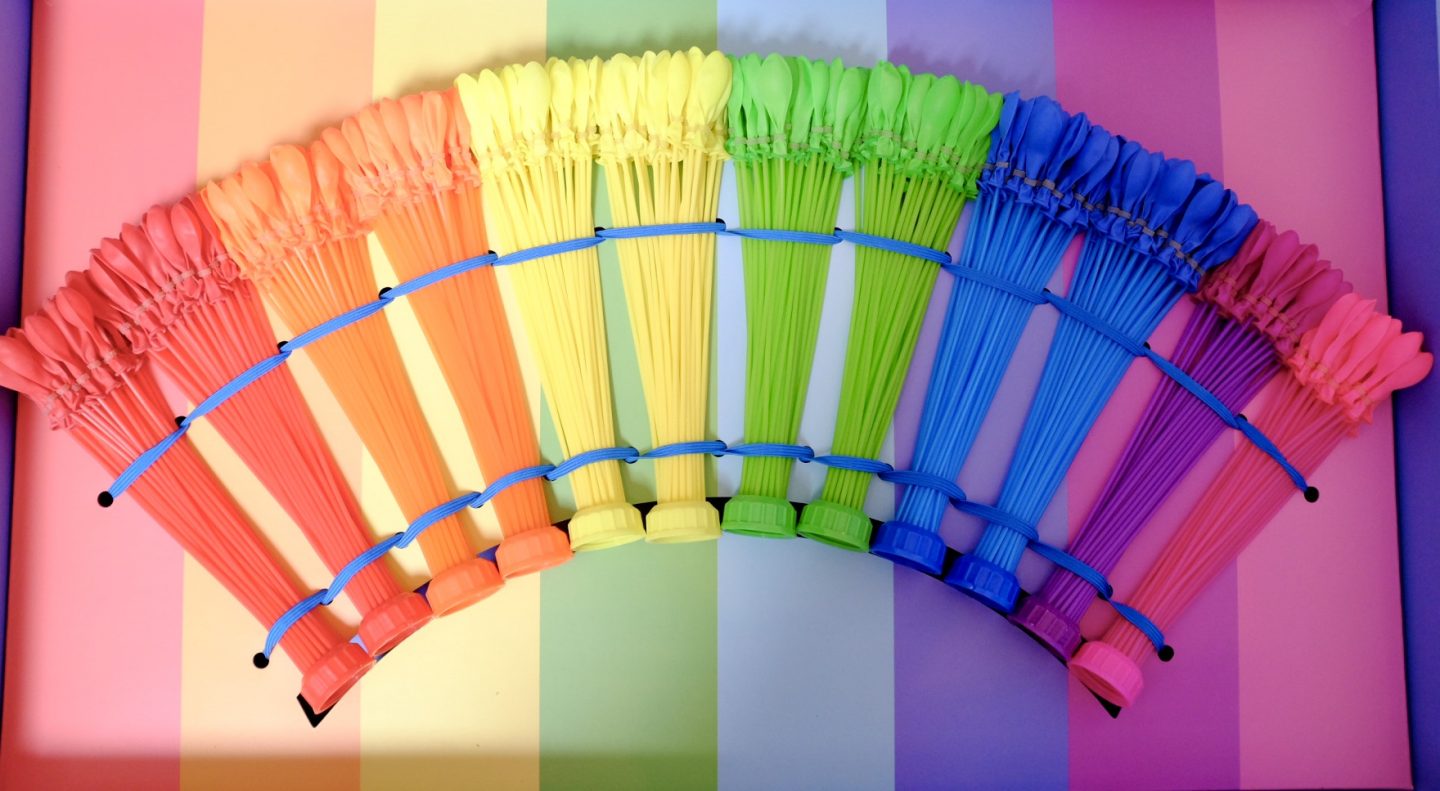 When we received the bundle I knew we needed to wait for some warm weather and luckily we didn’t have too long to wait before it warmed up.

What are Bunch O Balloons?

Bunch O Balloons are kind of what they sound like – a bunch of balloons but with the hidden excitement of being water bombs!

We were kindly sent a variety of products from the Bunch O Balloons collection: we were sent a larger pack that contains 265 plus balloons (this RRPs at £19.99) as well as some of the smaller packs. 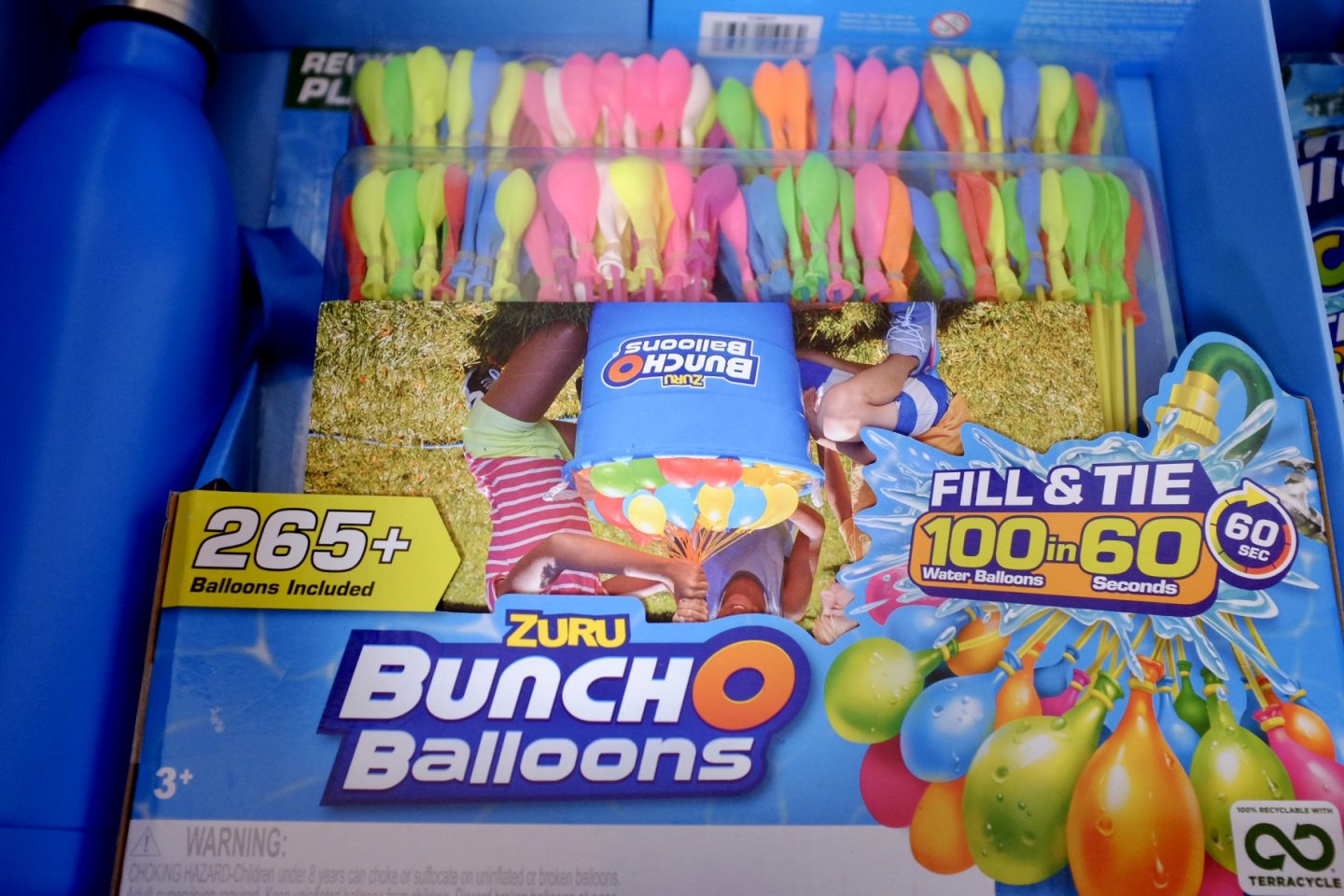 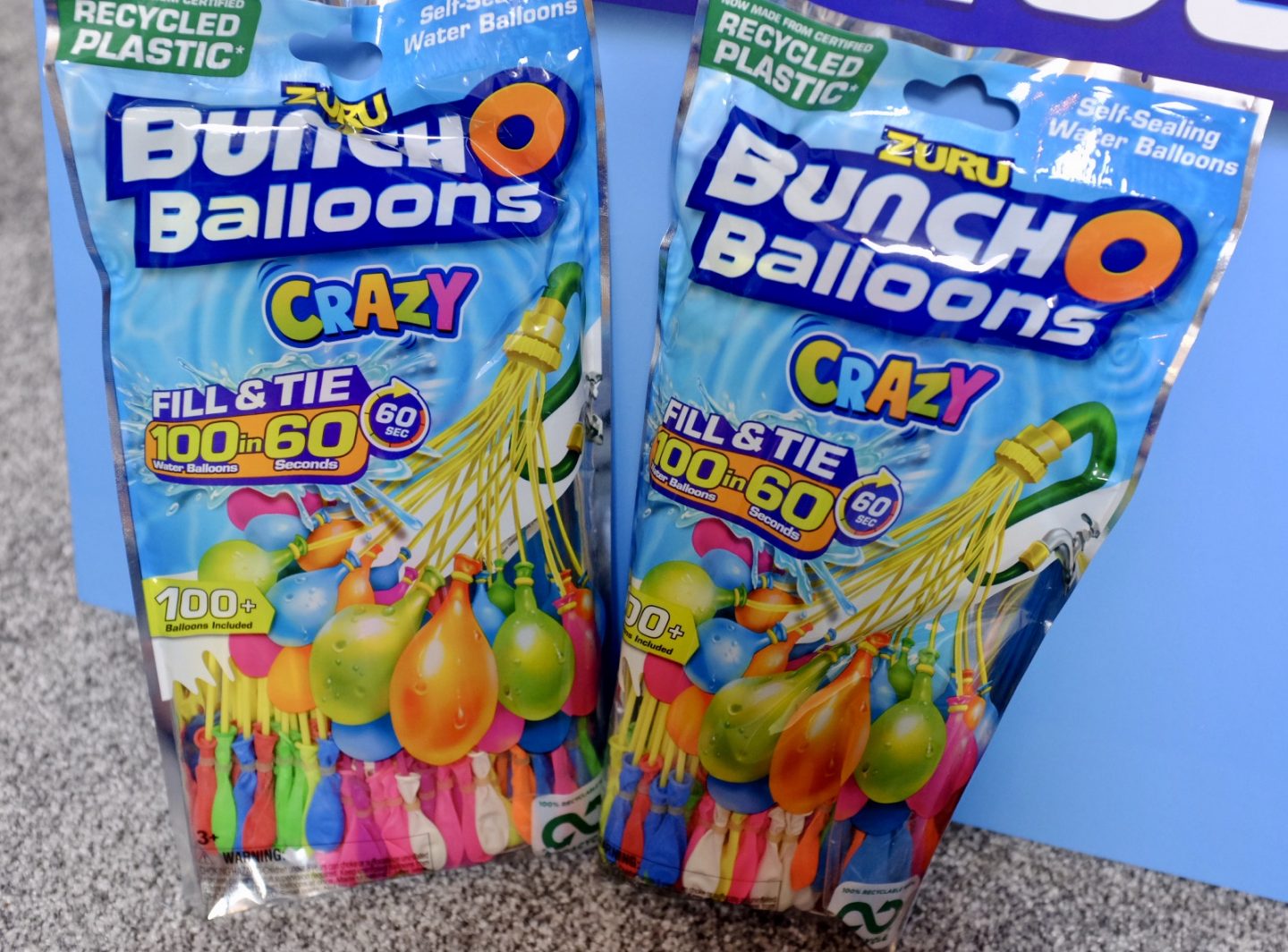 As well as a rainbow of Bunch O Balloons we were sent a towel and water bottle for more garden fun.

Included in the goody box was also The Bunch O Balloons Water Slide Wipeout retails at £20 and is designed to combine water sliding and having an amazing water fight. The end holds 100 of the self sealing Bunch O Balloons water balloons and you slide down into them! You can find them in Argos for example.

The product is aimed at children aged 5 years and over and is self-assembled. You need to blow up the little “pool” at the end to hold your water balloons and you attach the hose, via an included adaptor for water to flow onto the slide. 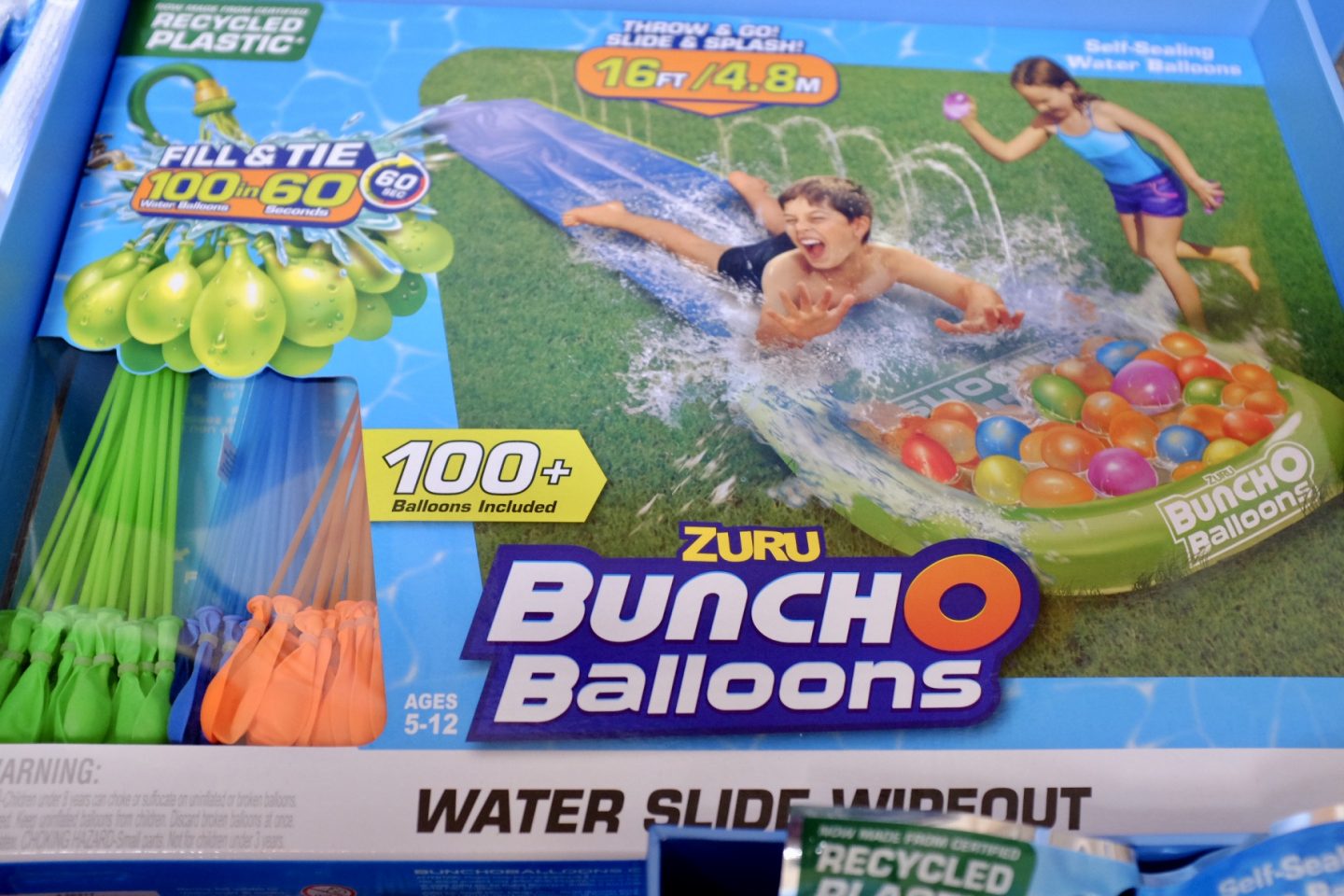 How Do You Fill and Seal Bunch O-Balloons?

This really is as simple as it sounds. My husband had a hose adapter that worked but an adaptor also came in the Water Slide Wipeout product. You attach the Bunch O Balloons to the hose and turn the tap on and wait. 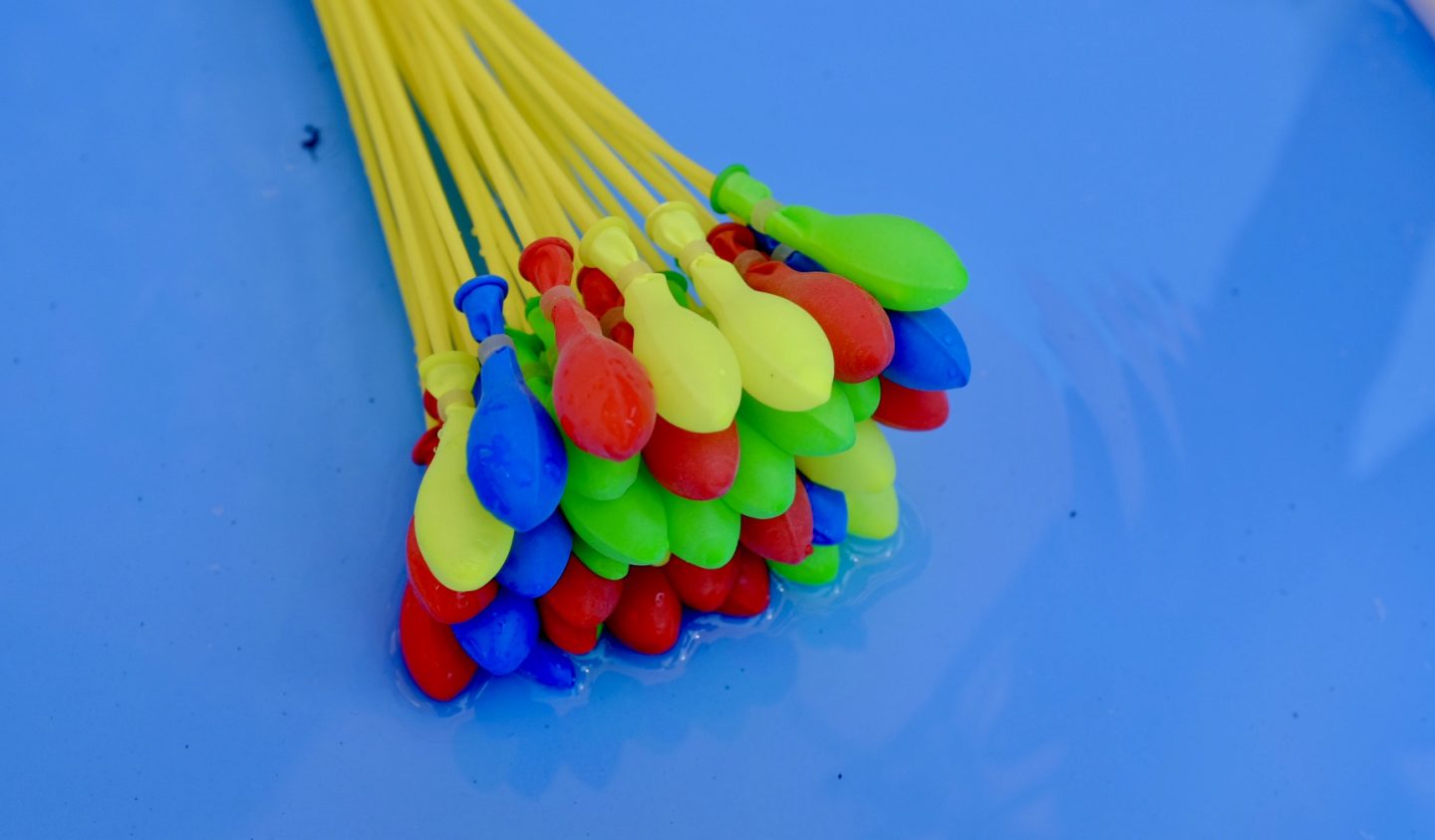 They quickly fill up and you are sent a handy size guide to tell you how big your balloons should be. I would stick to this, as we did find some popped if they got too full. 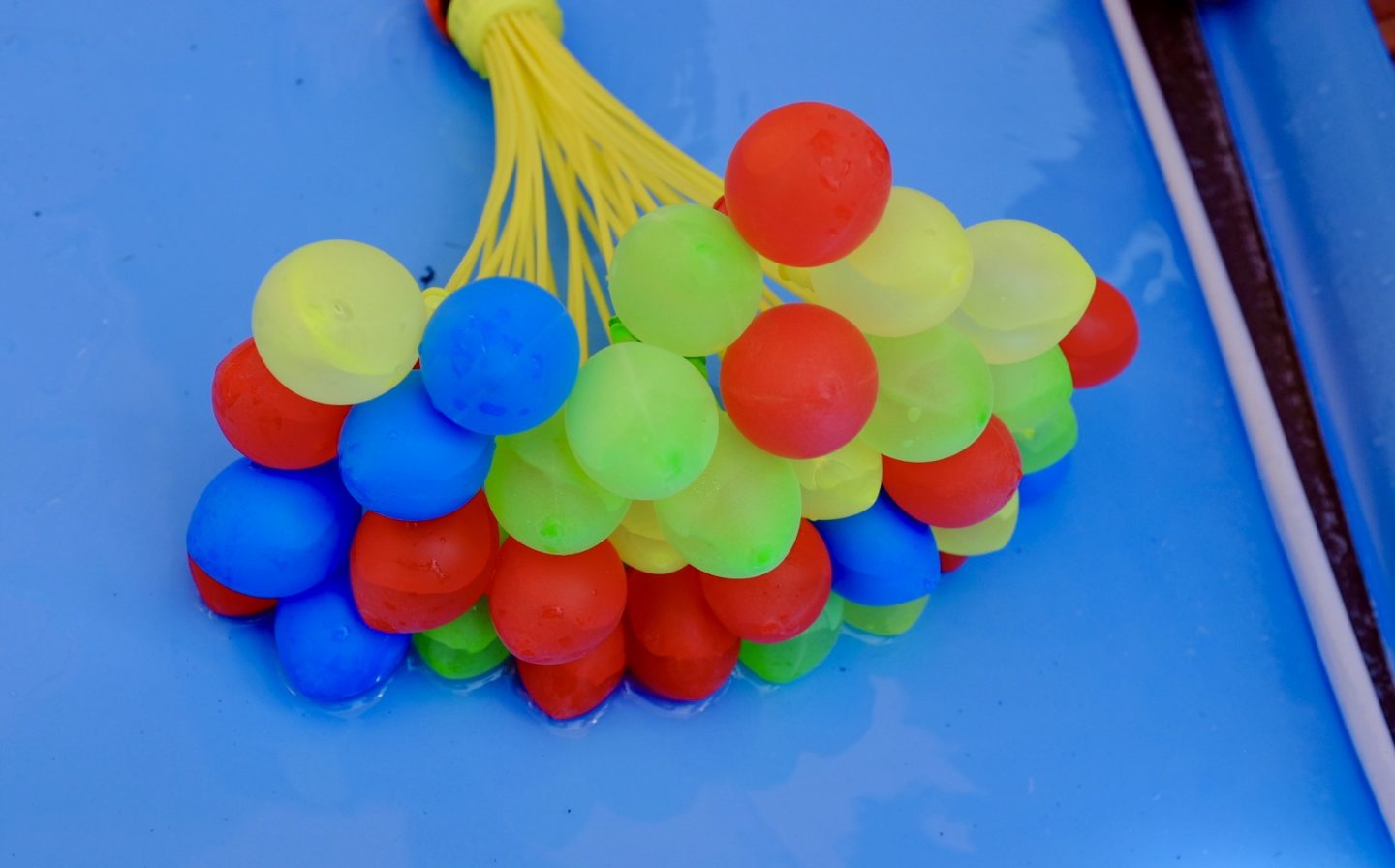 Also makes sure your hose has no kinks or knots in it, as when this happened to us our balloons didn’t fill properly and a lot were missed. Also make sure you fill them in a bucket or container, as we did find some popped if rolling around on the floor. Bear in mind these balloons get heavy! I had to lug a bucket to my neighbours house and it was a bit of a mission!

It’s so easy to remove the balloons when they are filled due to the O-Ring Technology. You simply pull them off and they are sealed and ready to go. The kids can hep with this easily too. 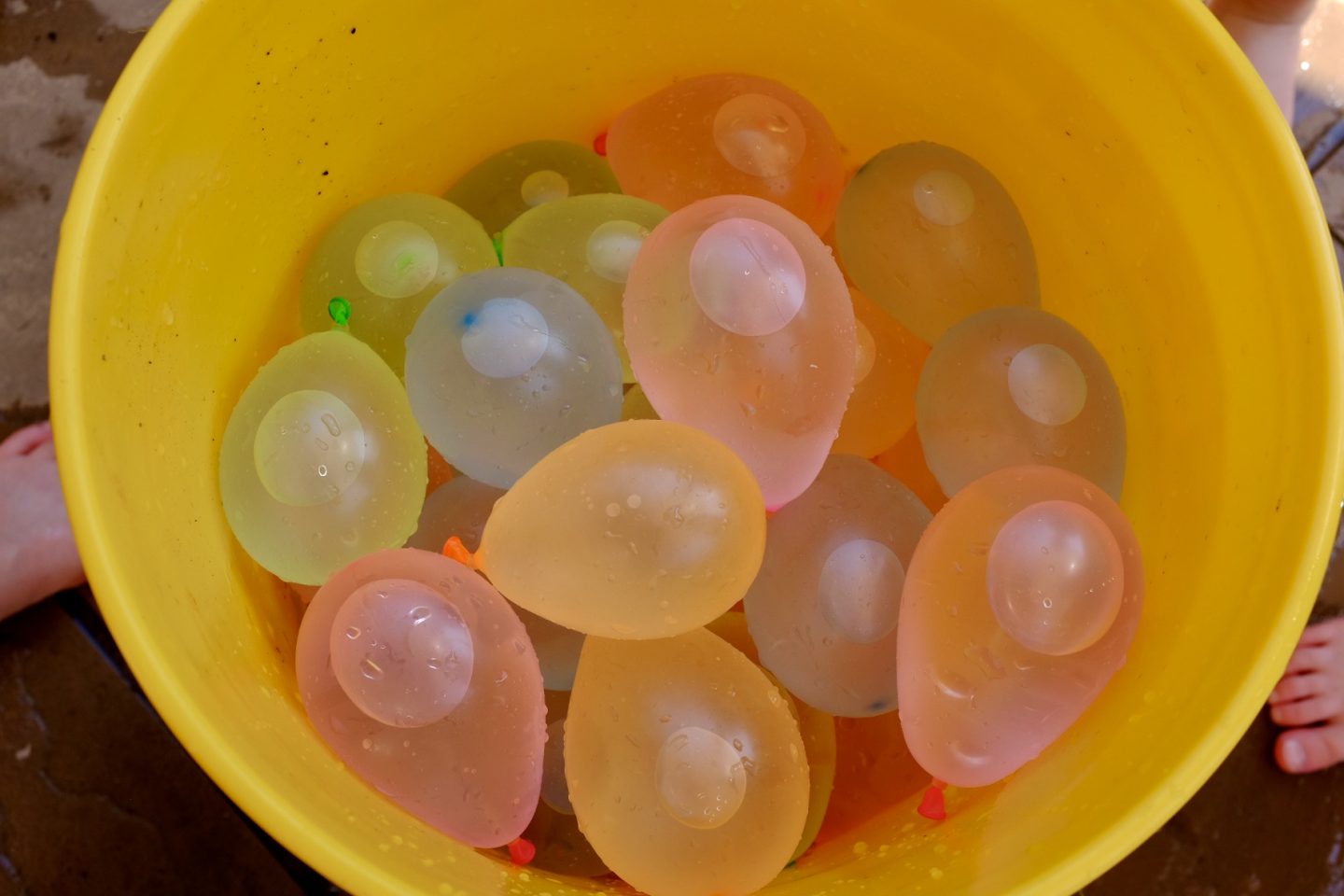 What About the Environment?

I must admit when reviewing toys now I do worry a little about plastic waste and having too many plastic toys.

However, it is good news. The Bunch O Balloons stems and caps are now made from 100% certified and traceable recycled plastic. The balloons are made from “natural rubber” which is a material derived from plants.

You do have to go and pick up all the popped water balloons when done though and this does take a little time. Bear in mind you remember where the balloons were thrown. I’m still finding some on my drive now and in the garden.

I put everything in the recycling when done.

We absolutely loved this product and had such good fun with them in our garden and with friends. It did take a little practicing filling the Bunch O Balloons; our second bundle onwards were better but it was making sure the hose wasn’t kinked and the water pressure was enough.

Even my 7 year old figured out what to do quite easily and she and her friend filled a bucket up by themselves.

We had such fun with them! It’s best to throw them at the floor and they pop up over someone, if you get a good throw. Throwing them directly at someone does just tend to make the balloon bounce off them! This was pretty amusing though.

We had a go with them on the trampoline and this was a huge giggle, as some popped from being stood on and others from being thrown. They do get used up quickly, bear this in mind. We got through quite a few, as playing with them is really addictive and you just want to keep fighting!! I loved all the different colours too. They are not the cheapest product but I guess it’s not often we get such amazing weather and there are great for a party!

I felt a little more reassured with the environmental aspect that you can recycle everything and the plastic is made from 100% certified and traceable recycled plastic. It’s always a tricky one as the kids have such fun with these sorts of products.

I found the Bunch O Balloons such a fun thing to do with the kids. They are great way to spend time together and have a really good giggle. I got pretty wet and it is quite satisfying watching them pop and your kids (or other adults) get soaked.

My eldest was the only one really at the right age for the Water Slide Wipeout. This was really good fun and she played on it with her friend the day after we first tested it out. It worked well. The water didn’t spray too highly from the holes we found and we weren’t sure if this was a pressure thing. However, it did get wet enough for the girls to slide down it. My eldest loved popping all the Bunch O Balloons when she slide down and it was fun to throw them at she slid! 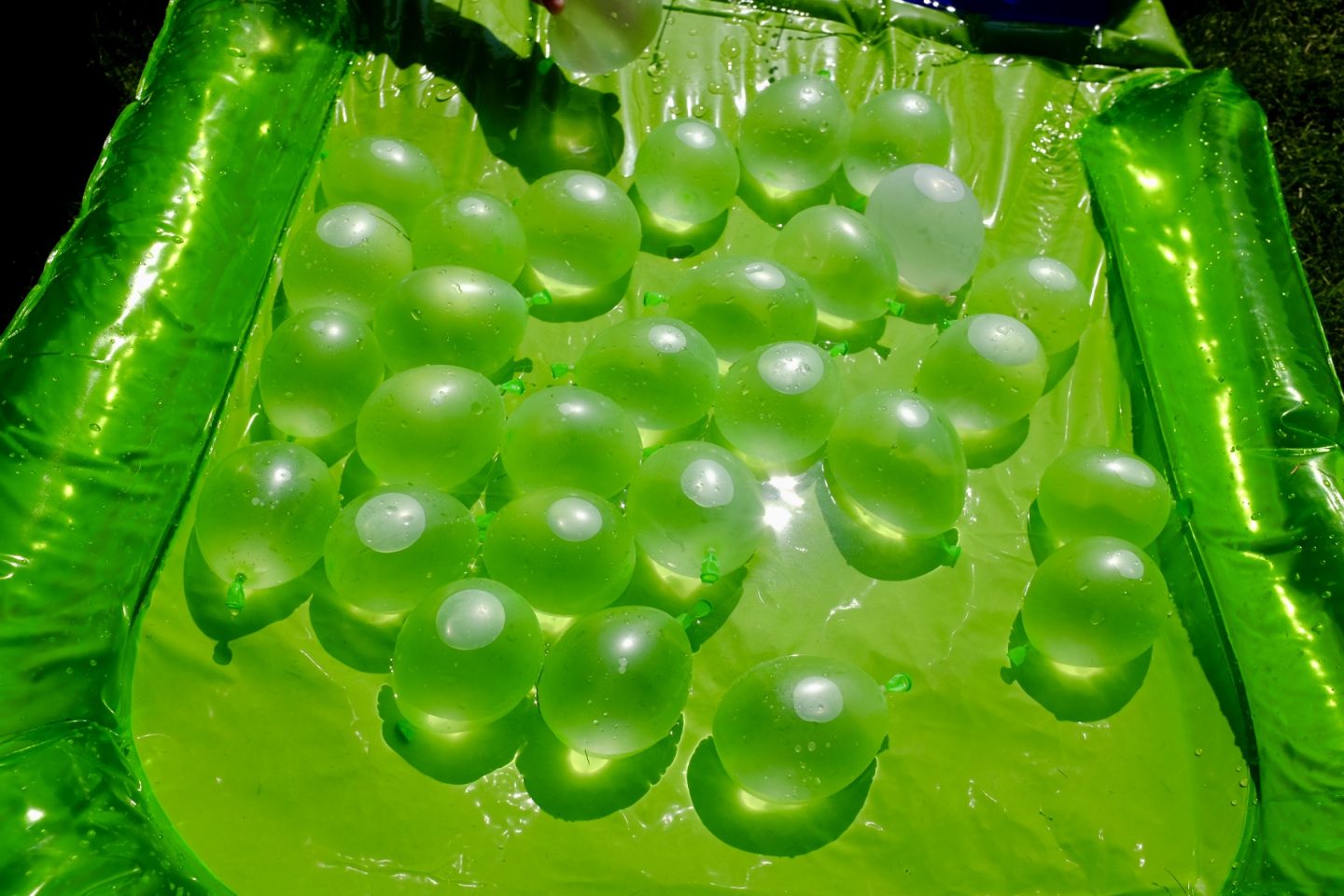 It’s a fun product for the garden in this amazing warm weather for sure and works well as part of a water fight. My eldest and her friend used it as part of an obstacle course too, so lots you can do with it. 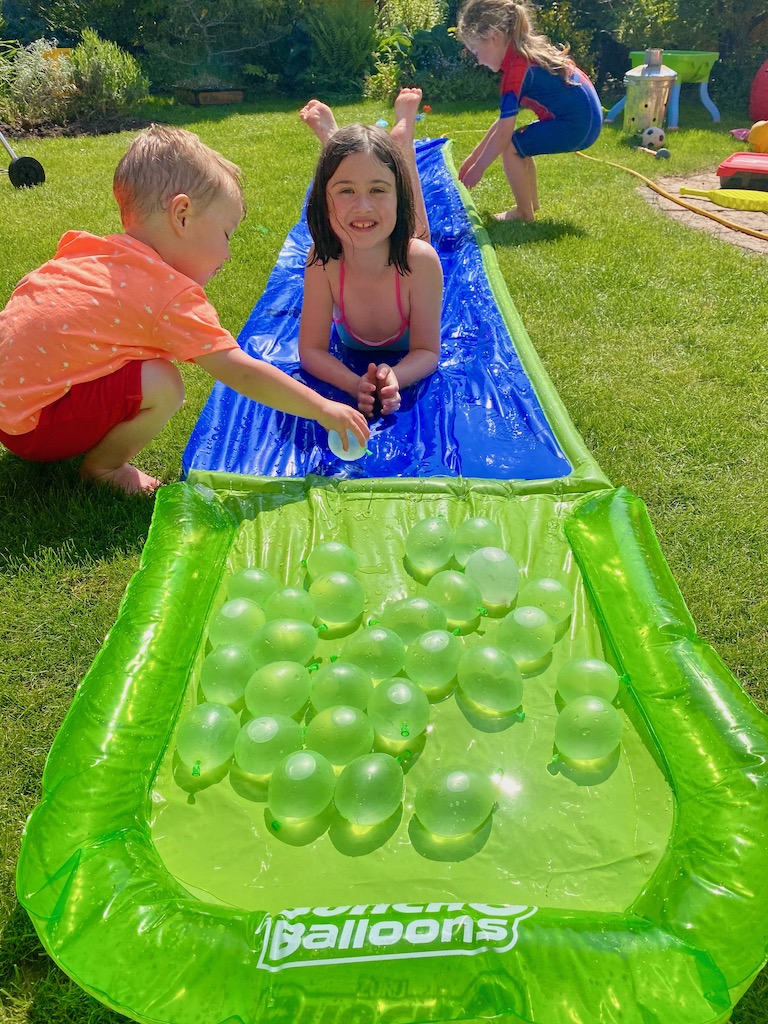 Overall, we loved the Bunch O Balloons. It really made the warm weather even better. The kids and adults had a really good laugh and they were really easy to you!

There is a bit of tidying up to do afterwards but we were pretty good at getting the kids to pick some up!

Thumbs up and let’s hope the weather stays as warm as it is now.

Would You Like to Win a Pack of 100plus Bunch O Balloons?