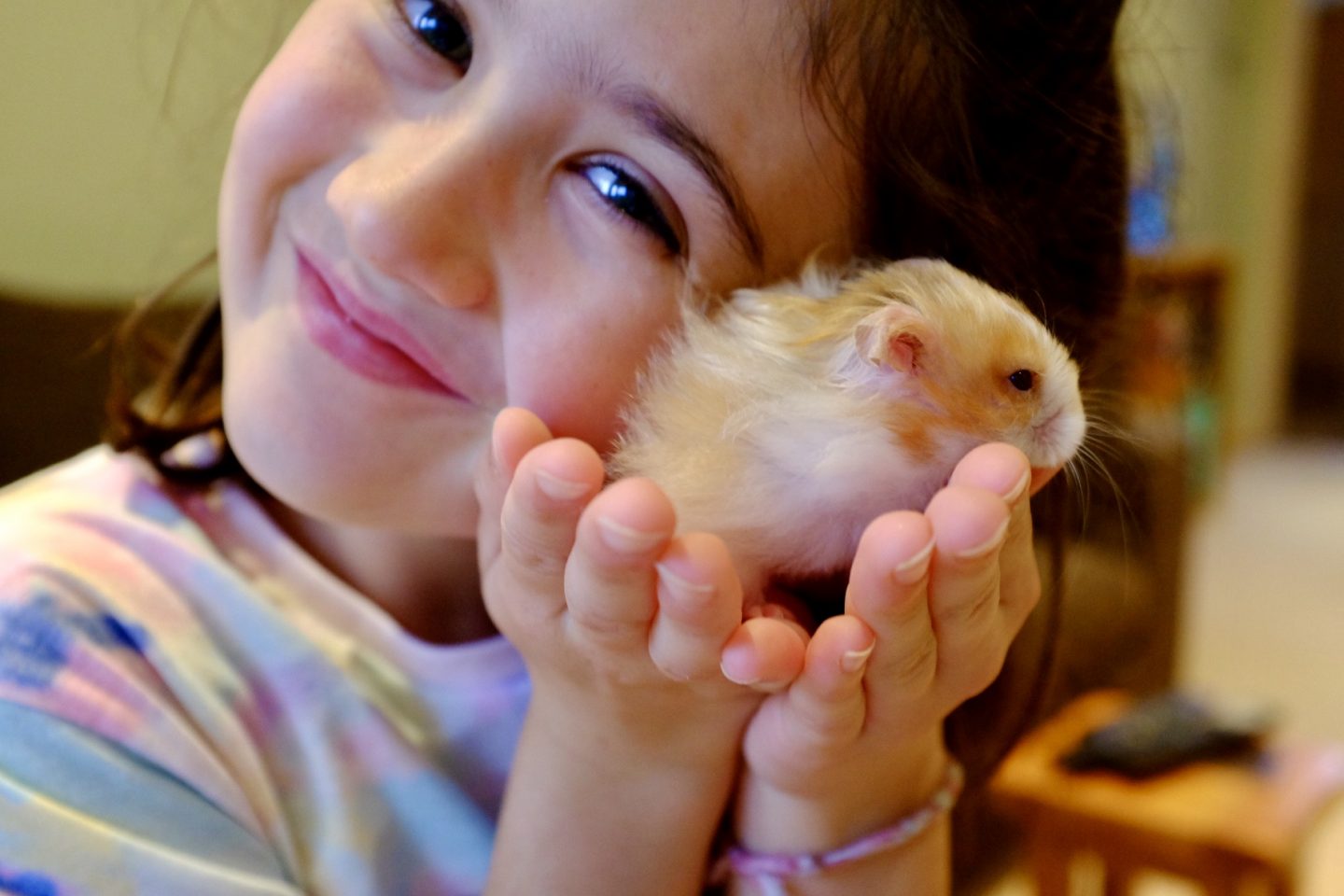 My eldest had talked about getting a pet for a while. There were many jokes about how she was going to look after an animal when she can barely keep her bedroom tidy but she was adamant. At first she was keen on getting a rabbit and even I considered a house rabbit for a while; it would be quite cute having this little furry thing wandering around. However, my neighbour squashed all those thoughts when she told me, after a trip to the pet shop, how high maintenance they can be! They need to be neutered, have their teeth kept in good shape, they chew EVERYTHING and are generally quite a hard pet. So we crossed rabbits off the list. We then considered Guinea Pigs but my husband wasn’t keen. We were then told they live around 7 years and if the novelty wears off, this leaves Mum and Dad looking after them. So I then became not keen either! What was left? A hamster and buying a hamster the day before her 8th birthday was completely lovely. It just so happened my neighbour had bought for her daughter one too before us and this was really helpful for advice.

We had the ground rules set; my eldest would have to sort out feeding her hamster and give it fresh water daily. She would also have to help clean it out; I wasn’t too worried about helping her but I didn’t want to have the job left for me alone.

Why Choose a Hamster?

I had two Syrian hamsters as a child and knew they were the next pet on the list. They were cute, friendly, easy to handle and pretty easy to look after. Their lifespan is around 2 years, so I knew if it was not as expected for my eldest, they would not live for too long. You don’t have to be mega organised and prepared. We went to Pets at Home and were given lots of advice on what to buy and it was very easy to set up the cage and equipment at home.

Hamsters are pretty cheap to buy; around £10 (the cage is equipment is what costs). As we chose a Syrian hamster, you only need one, as they would fight and potentially one may kill the other one. Dwarf hamsters (which are smaller of course) come in pairs or even groups, with enough space.

I knew once we had our hamster settled, it would be reasonable low maintenance and I have been right so far.

We decided to also go for a Syrian Hamster. The Dwarf ones looked teeny and very fast and come in pairs or groups. My eldest wanted to be able to hold hers comfortably and safely. I didn’t really want to be buying more than one.

I was quite lucky, as my neighbour had been very well advised on what size of cage to buy by a family member, very passionate about animals. I checked hers out and decided to go for the same thing.

The main things to consider are size. It can be cruel for a hamster to be a small space. They get stressed out and chew the bars, trying to escape.

There are so many to choose from; ones with multiple layers, tubes and toys. 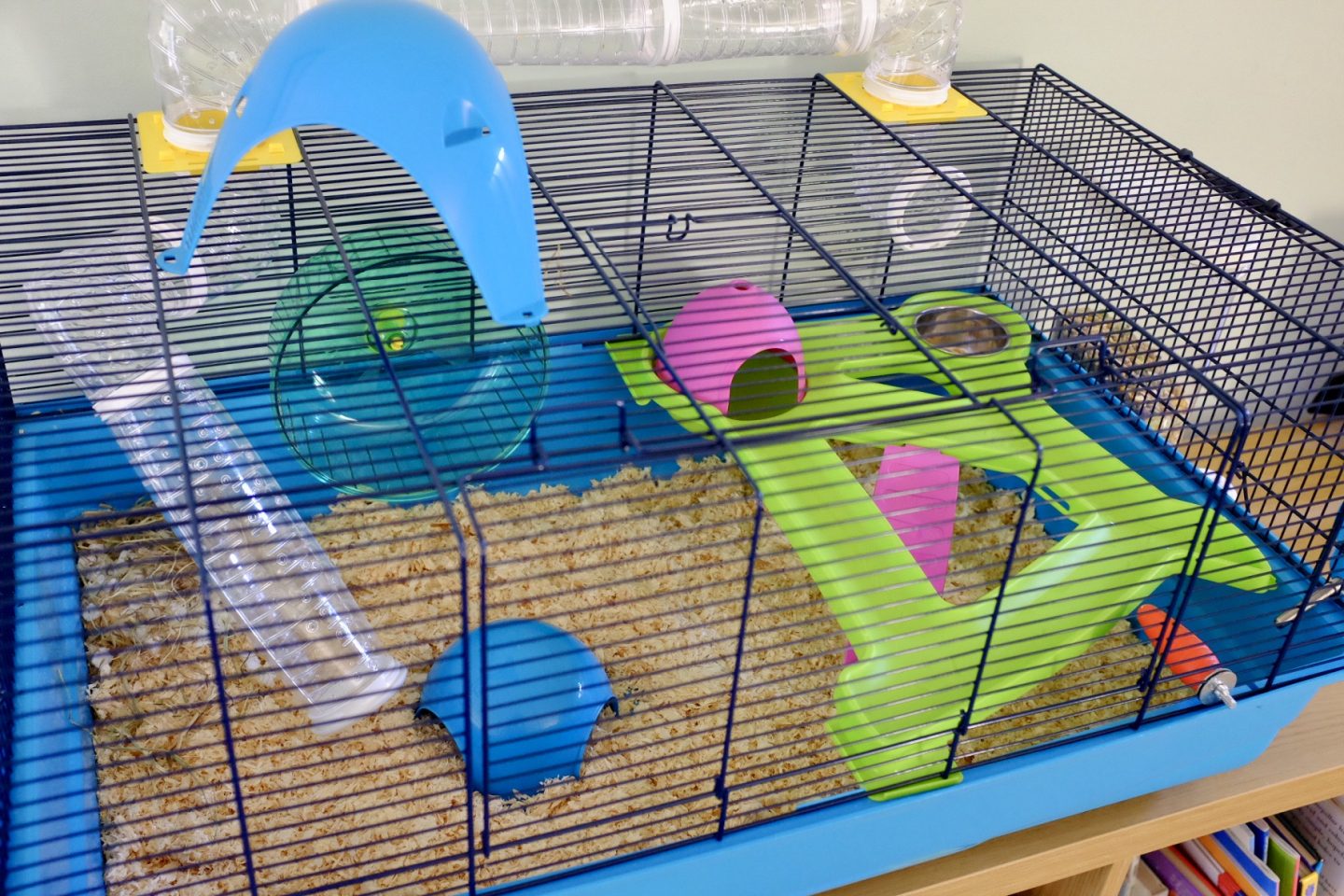 We chose the one above from Pets at Home. It cost £65 and has dimensions of H50 x W80 x D50. It is classed as an extra large cage and I felt was the best for our little hamster. It is recommended for one Syrian hamster. It came with a food bowl, water bottle and wheel.

I would advise do your research here and 100% don’t buy a smaller cage, as it’s the cheaper option.

What To Buy for Your Hamster

We had plenty of help from the staff at Pets at Home but we did come back with a basket-full. This included:

12 Things We have Learnt about Having a Hamster

Bringing little Fuzzy (a boy) home was a complete joy. He was very easy to pick, as was just so inquisitive and had the most lovely fuzzy tail. My eldest had decided to call her hamster Fuzzball before we even chose it, so that tail made it. It was me that started calling him Fuzzy and this has just stuck.

We have learnt quite a bit in few weeks we have had him:

– They sleep during the day. This may sound like common knowledge but it can come as a bit of a shock to little ones. They do occasionally get up in the day for food and water and my eldest has a quick cuddle but otherwise they need to be up quite early or stay up a little to get some play time.

– They poop a lot when scared or stressed. Fuzzy thankfully doesn’t do this much now but if my other children get a little over-excited when handling him, he does get scared and poop more. We take this as a cue to put him back his cage for some time alone.

– All food you put in their bowl will disappear so quickly. You think they have eaten it but no, it has been stuffed in their pouches and taken to bed. I constantly think Fuzzy is starving, as his bowl is always empty. However, don’t worry!

– They do like other food. Like us, you have to be careful with salt and sugar so we have given Fuzzy fruit and vegetables and low sugar cereal, like Rice Krispies. My neighbour has tried a bit of pasta too.

– They sleep in the places you least expect. Fuzzy made his bed in the tube above the cage and he looks so squished. I expected him to use one of the hidden dens or the corner but I guess hamsters dig burrows and sleep all snuggled, so this makes sense. I just didn’t expect it! 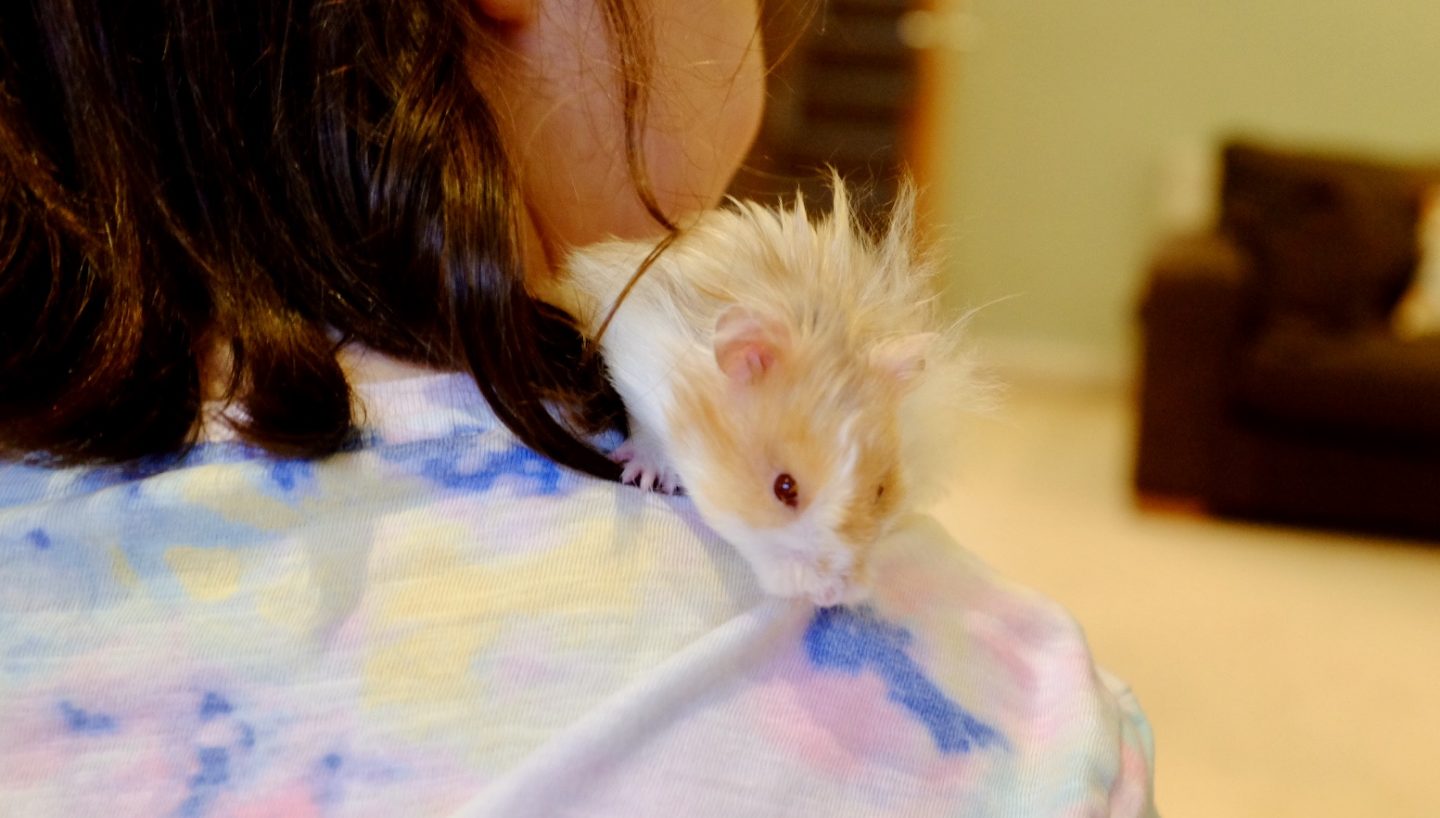 – They ESCAPE – my poor eldest and her friend could not understand how Fuzzy had escaped when they swore they shut the cage. I didn’t believe her until a week or so later Fuzzy escaped again!! We realised the cage had been shut with a teeny gap in the door and it escaped. The gap it escaped through was teeny but yes, it got out. Make sure cage doors are shut as tightly as they can be at all times.

– If they do escape they often appear – we were told by Pets at Home to set a trap. A bucket with food in and a few books leading up to this. We did try with food but Fuzzy just appeared when he escaped for the second time and was grabbed.

– Close the door of the room your hamster is in at night. The first time Fuzzy escaped he had been locked in the lounge with her daughter and her friend having a sleepover. I only had to listen in a quiet room to know he was under the TV unit and he was. I could hear him. However, the second time the door was open. He was found when he strolled out from around the dishwasher and my husband grabbed him!

– They put everything in their pouches. When Fuzzy first escaped and we got him back into his cage, it was a huge shock when he emptied his pouches. We found small toy balls and chocolate!! We were a bit shocked and worried but he was ok! Just makes you aware of what is around the house and being more vigilant about them escaping!

– You will find mess everywhere. Fuzzy is quite long-haired so whenever my eldest gets him out of the cage he has saw dust and bedding stuck to him which goes everywhere, as my eldest carries him about the house. This also applies to poo too. My eldest will do some hoovering but I am debating getting a handheld hoover just for his mess. I can use this and so can my daughter.

– They get tame quite quickly – personally I think it’s a bit of cupboard love as I’m a hamster feeder but little Fuzzy knows when we are there, he comes to the door and sniffs around and seems pretty content, as my eldest holds him a lot. He loves playing in sleeves and pockets and he loves being stroked. He does have a good nose in his food bowl when put back in the cage though, so sure he’s expecting the odd treat after!

– They are fast – we find Fuzzy is quite slow when the first comes out of his cage but he speeds up quickly and is often quick to escape! Bear this is mind with little ones!

We love little Fuzzy and he has made such a welcome addition to our household. We all love him and my daughter has surprised me, as the novelty has not worn off and she is helping to look him, as promised.

He is lovely to cuddle and spend time with and the most placid little thing.

As a first pet, a little Syrian Hamster is a brilliant way to start.