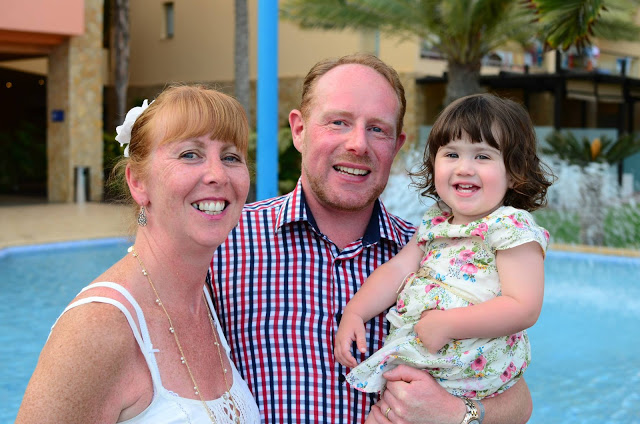 Here it is – the obligatory holiday in Fuerteventura post! I did consider writing a post each day whilst away but I soon realised:

a) I’m not that organised

b) I took a blogging break

c) We didn’t actually go on any trips and had one of those holidays where were stayed around the hotel and local town so my posts would get boring!

I thought I’d write more of a summary, highlights and more pictures.

Myself, hubby, gremlin and my parents all went to Fuerteventura, Caleta de Fuste, for 11 nights. We stayed at a great hotel called the Barcelo Thalasso Spa and it was all inclusive (awesome).

We were lucky to have an afternoon flight out and it was about 4 hours to Fuerteventura. The gremlin really surprised me as was good as gold in the airport whilst we queued to check in and in the lounge.
She didn’t sleep for the whole flight to Fuerteventura (quelle surprise!) and finally crashed around 10pm in the travel cot in the room.

We settled into a holiday routine very quickly. Late nights meant the gremlin’s wake up time shifted to 7.30-8am (from 6am!) which was fabulous. The mornings were not always very warm in the beginning, we had some cloud and it was often mid-late morning on some days before it heated up. Often I would toddle off to the gym with hubby or my Mum and the gremlin would go down to the beach for a play, into the town shopping or to a play area, with whoever had not gone to the gym.

We tended to settle for a drink and a read before lunch. The gremlin needed a cup of iced water and   a straw and she was fascinated. We took turns walking around with her when she fancied a stroll.
The food was great! Lots of fresh fruit, eggs, bacon and a tonne of carbs for breakfast. Lunch and dinner was always salad, fresh meat and fish, paella, pizza, pasta (basically my most favourite foods). There was yoghurt, ice-cream and loads of funny shaped (and tasting) cakes and fruit for pudding.

Most afternoons were spent by the pool. The gremlin always went for a dip but she was never in the water for too long; not that much of a water baby. We had one hilarious moment (well now it is) when she was having a go in her inflatable boat. Hubby pulled her along too fast and the next minute all that was left was a capsized boat and a floating hat, as the gremlin took a dunk! Safe to say he did not live that one down for a while! A very LONG while! Another reason the gremlin requested her “towel” relatively quickly was a couple of times she was given a little ice-cream after her swim. Lets just say my daughter is a VERY fast learner; her towel was no sooner over her head and she was asking for her chocolate ice-cream…indeed!

Gremlin either napped pre or post lunch. Pre was often better as she was happier and ate more at lunch. Post meant my Mum and I could take her down to the marina and have a cheeky pm Sangria. These were delicious and we got to sit and stare out at the marina and gremlin would feed the fish, with pinched bread on our way back. The days really did fly and it stayed so hot well into the evening. We often didn’t want to get ready but knew we had to, as had limited time with a toddler.
The evenings of our holiday in Fuerteventura were busy! We would bath gremlin and get ourselves ready. She often looked so sleepy but always got a second wind and would have some tea with us. We then either took her for a walk but mainly down the the kids disco. She got braver as the days passed, dancing more and wanting to touch Morgan the giant parrot. The music drove us flipping nuts (post to follow) but she had a blast, Then we either retired to the lobby or went to the outside bar for drinks and chats. Gremlin was going to bed at 10pm most nights; most days we had no problems but others she was grumpy and would cry a lot. This improved towards the end as she just got used to it, I guess. I was amazed at how she adapted. She did eat but not as well as at home. Possibly due to her new routine, extra snacks (ice cream!) and the heat.
Hubby and I had a date night which was lovely. We went to a steak house; hubby had steak and I had sea bass. This was the actual fish; head and tail. Was a bit daunting at first but so yummy. We went on for a cocktail and couldn’t resist going back to the lobby to see gremlin. She ran across to see us like a loon, so was worth cutting the night a bit short.

I’m no fashion blogger but thought I’d put a piccy of what I was wearing. I lived in New Look and H & M clothes. White jeans, maxis, dresses and tops. Perfect and not too pricey. 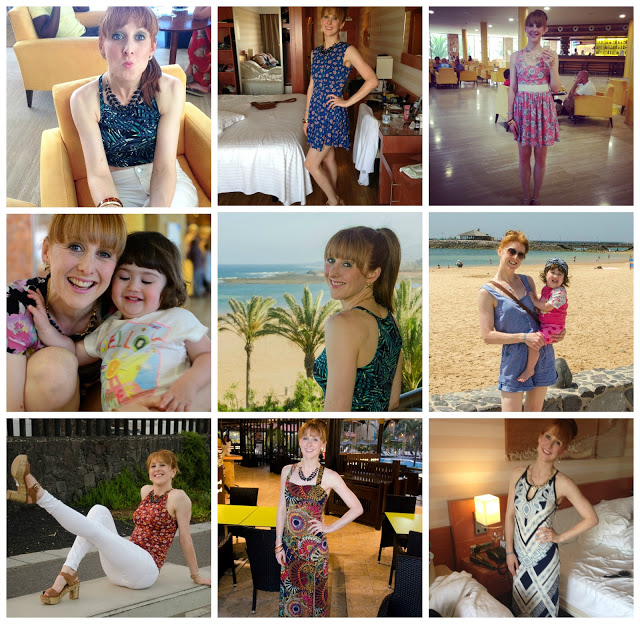 The gremlin was just obsessed with all the cats at the hotel and we were always having to look at them and tell her not to touch!
We weren’t as sure about Fuerteventura at first as usually go to Turkey. It is a lot more chilled out there (less hotel rules!) and much more green. However, by the end I changed my mind. The hotel was really fab, the beach walk was lovely and it was a pretty place.

We had a brilliant time! Hubby and I got time alone and to ourselves as well as lots of time with the gremlin and as a family together. I was so much more relaxed from start to finish as was the third holiday abroad with my girl. We chilled, ate and drank, exercised, shopped and walked. What else to you need?