We are becoming regulars at the fabulous Chi Kitchen in Birmingham. We recently tried out their afternoon tea menu and have just been back to taste their amazing Christmas menu too.

For any of you that haven’t read any of my previous reviews Chi Kitchen was previously only found in London and has expanded up North, much to our delight. The food is a mixture of Thai, Chinese, Malaysian, Korean, Japanese and Vietnamese tastes so is really varied.

I am not much of a Christmas dinner girl. Roast dinners just do not cut it for me and I am the person who is guaranteed to choose fish and a chocolate pudding on a Christmas do.

If you are like me, then the Chi Kitchen Christmas menu is just for you. It is a 3 course meal with a drink for £21.95; a delicious bargain in my mind.

We all went along this time, including the gremlin. My little Piglet slept through the entire meal so this was perfect. 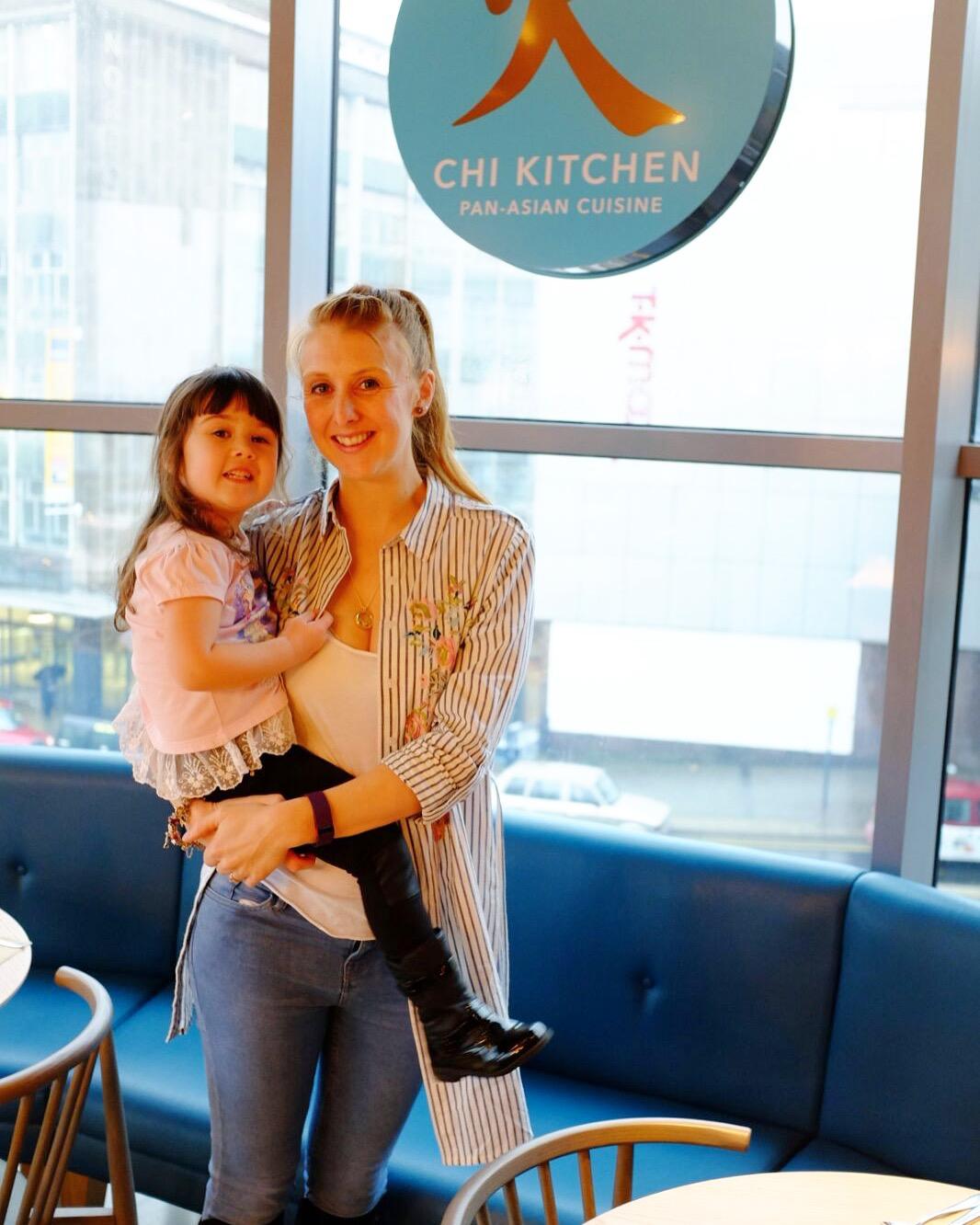 As I was potentially breastfeeding the alcoholic option was once again off the menu. It was a mixed berry Bellini. However, I chose the non-alcoholic version was the same minus the alcohol. It was delicious and tasted like drinking fresh raspberries. It was also beautifully presented and we had a strawberry with it. We want to try and make it at home. 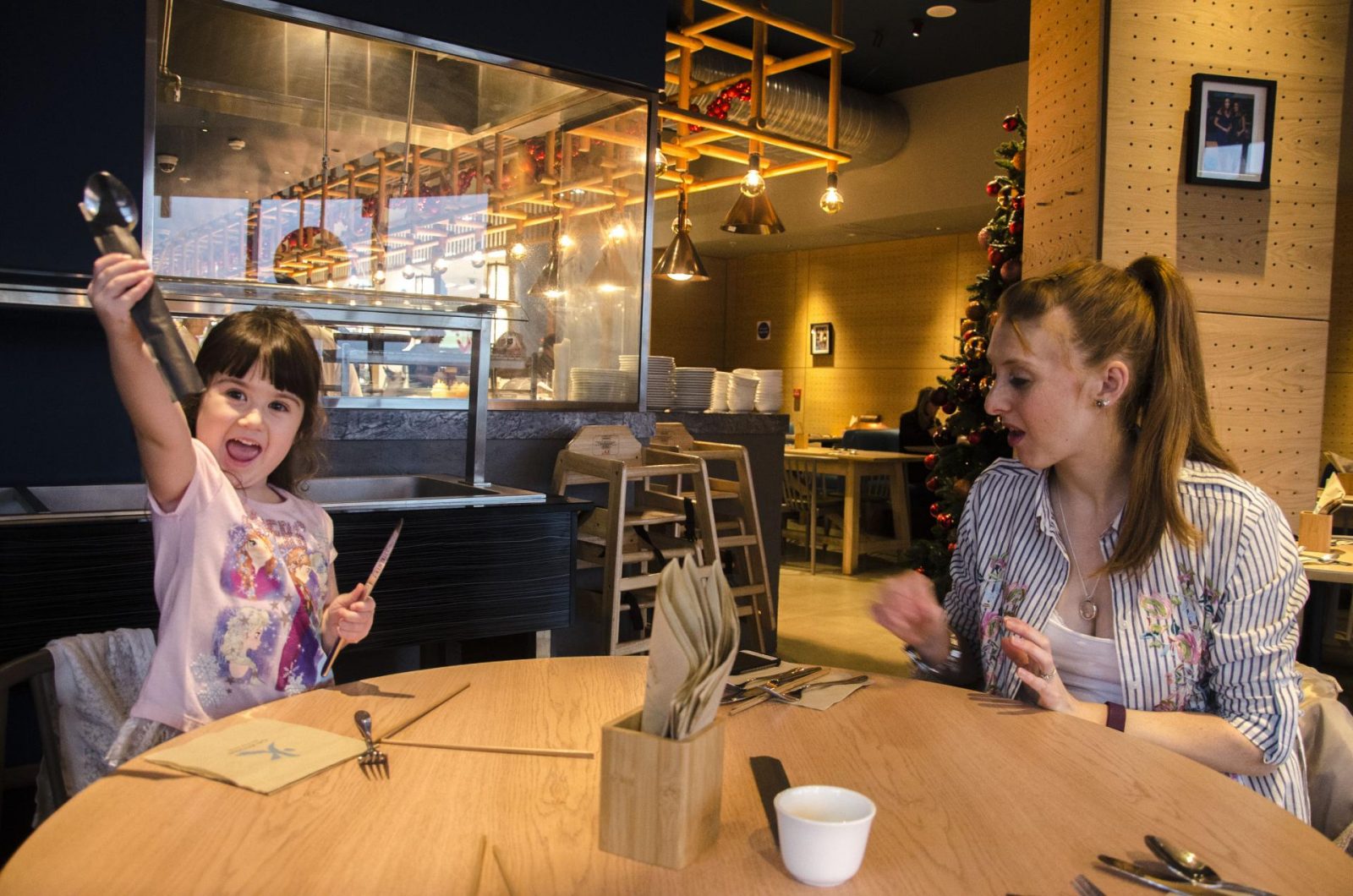 We were so lucky to taste all options for the 3 courses and started with chilli prawns, which were deep fried with spring onions and walnuts and served with a chilli lime sauce. These were amazing. The dip was sweet and spicy and the prawns perfectly cooked. 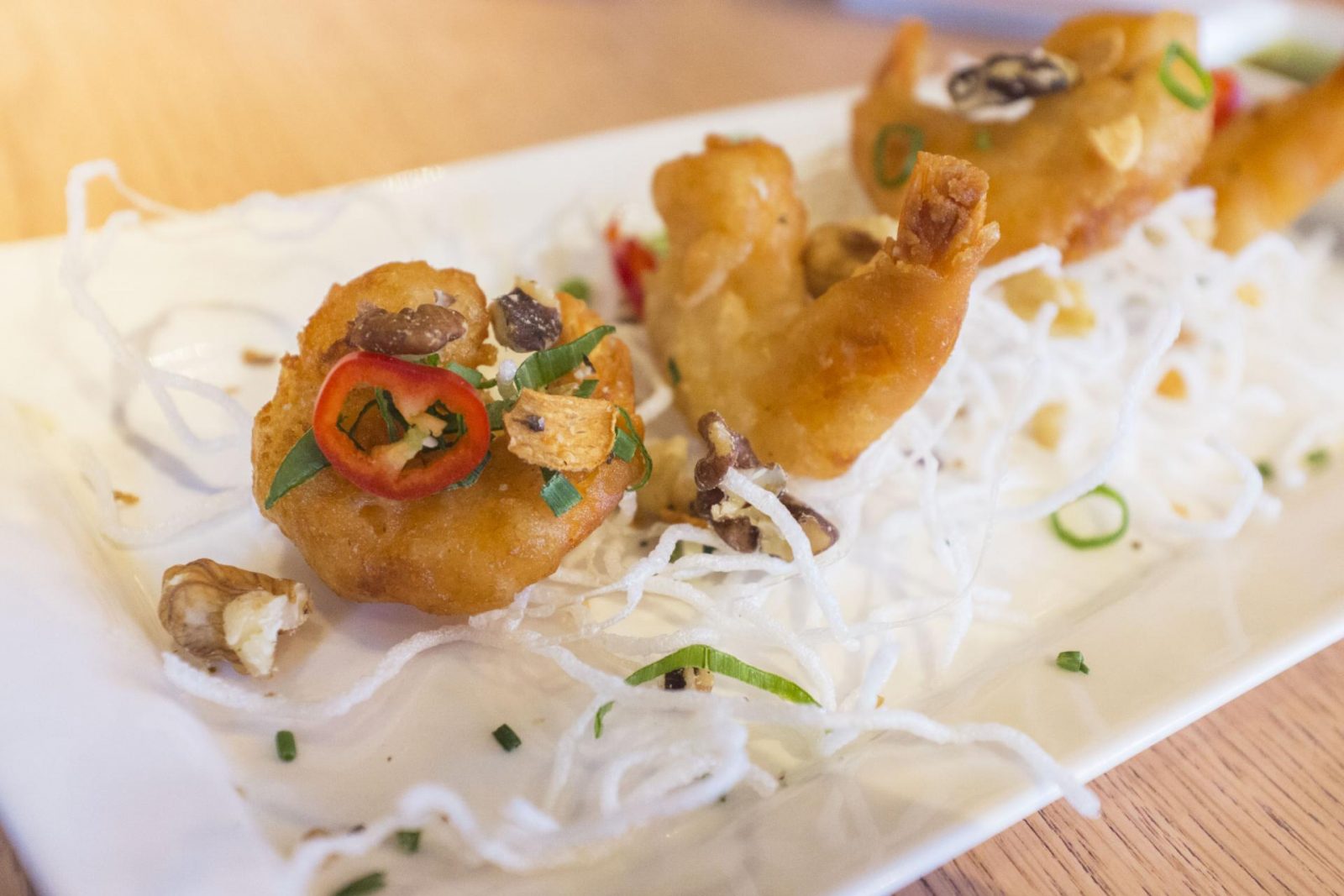 The gremlin loved some sweet potato, also deep fried, which we also enjoyed. These made a light, tasty, vegetarian starter. 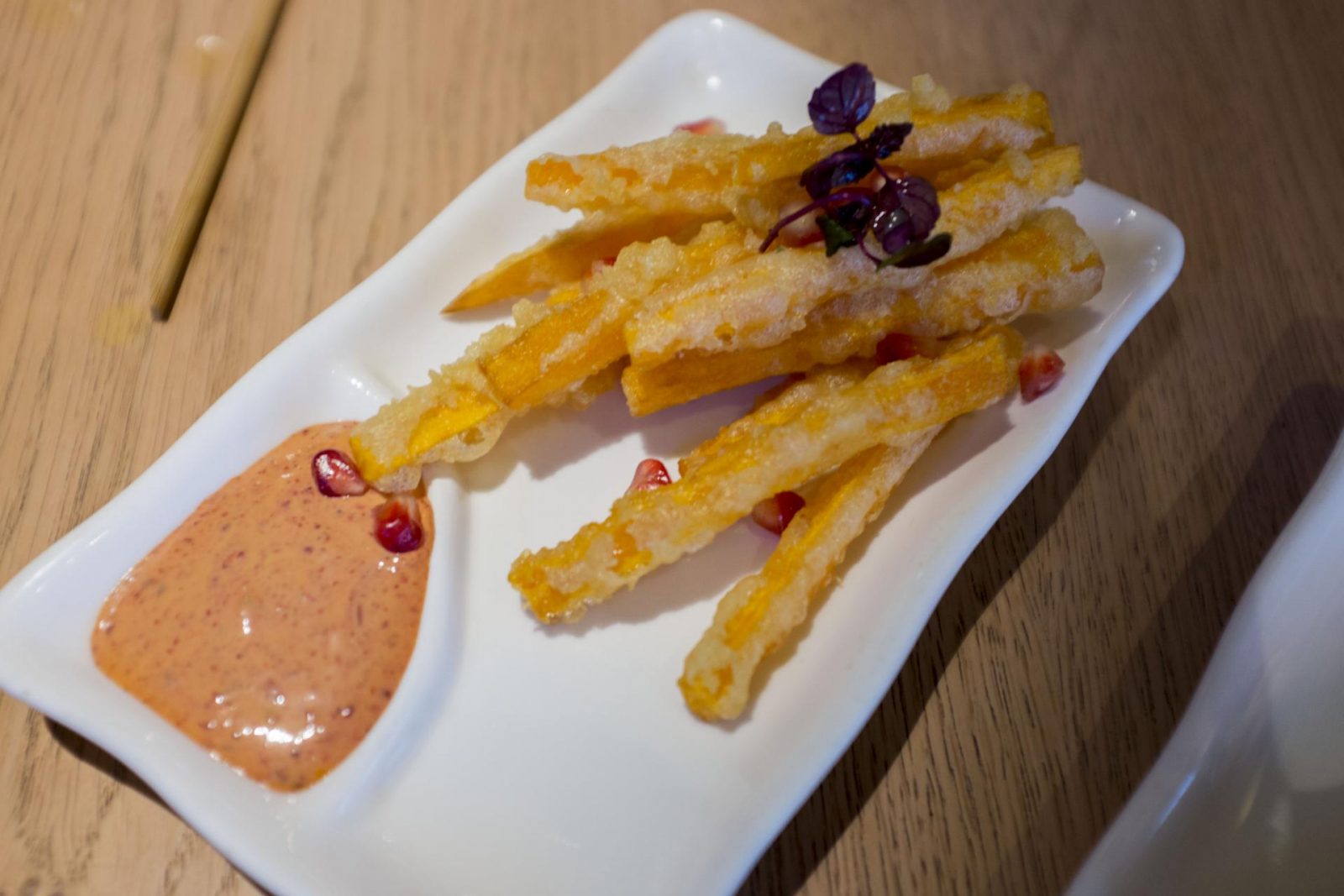 We also tried the final option of turkey spring rolls which to my surprise, I liked the best. I described them to hubby as Christmas dinner in a spring roll, as this was really what they were like! The turkey and flavour was gorgeous and they were hot and just delicious. 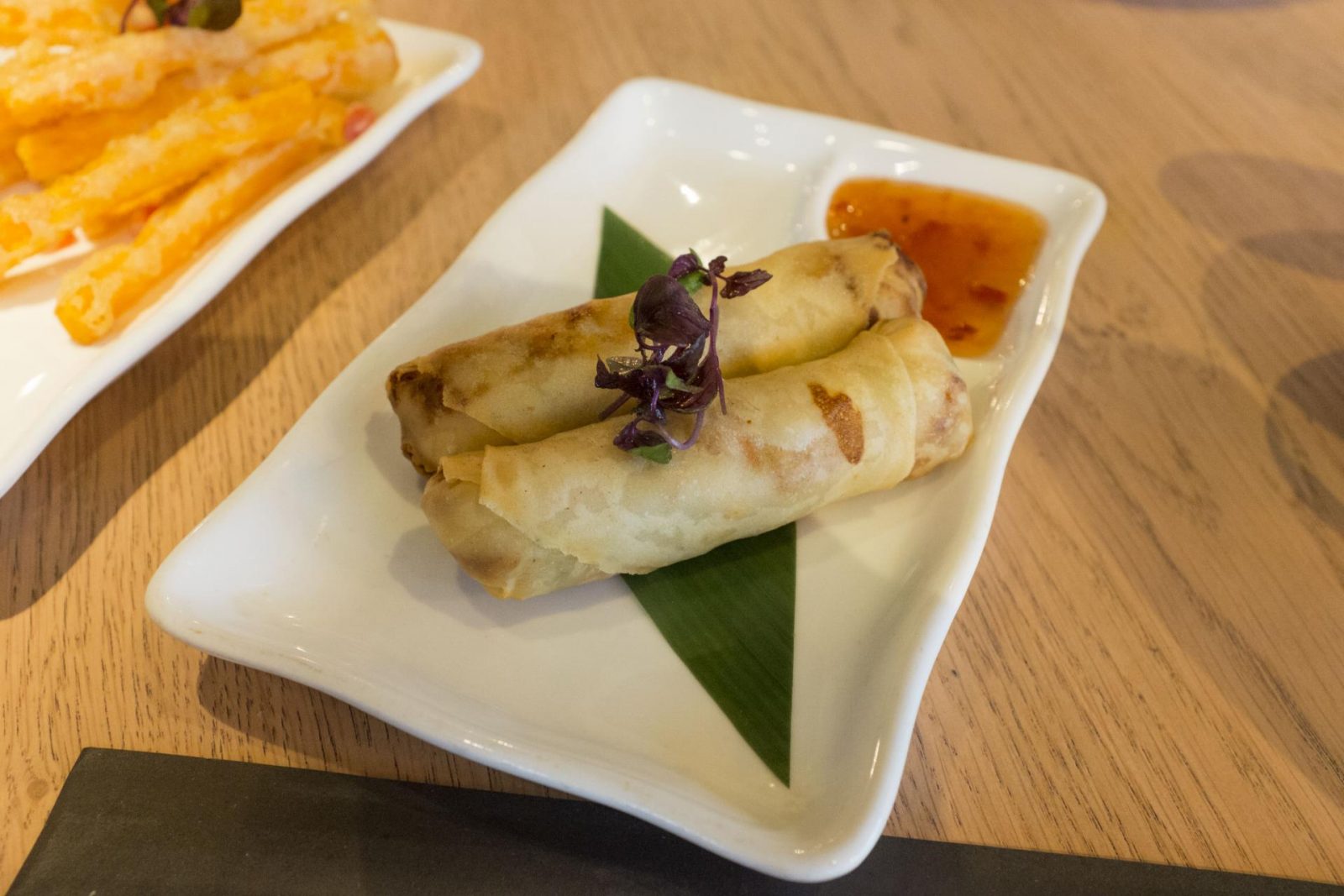 I found the starters a perfect start as not too filling but enough to satisfy some hunger.

After some more Bellinis we were onto the main course.

The first thing we were brought was salmon teriyaki and this would have been my choice, if I just read the menu. It was perfectly cooked, not too over flavoured and enough to fill you up. The teriyaki sauce was definitely a much better alternative than gravy served with a traditional Christmas dinner! 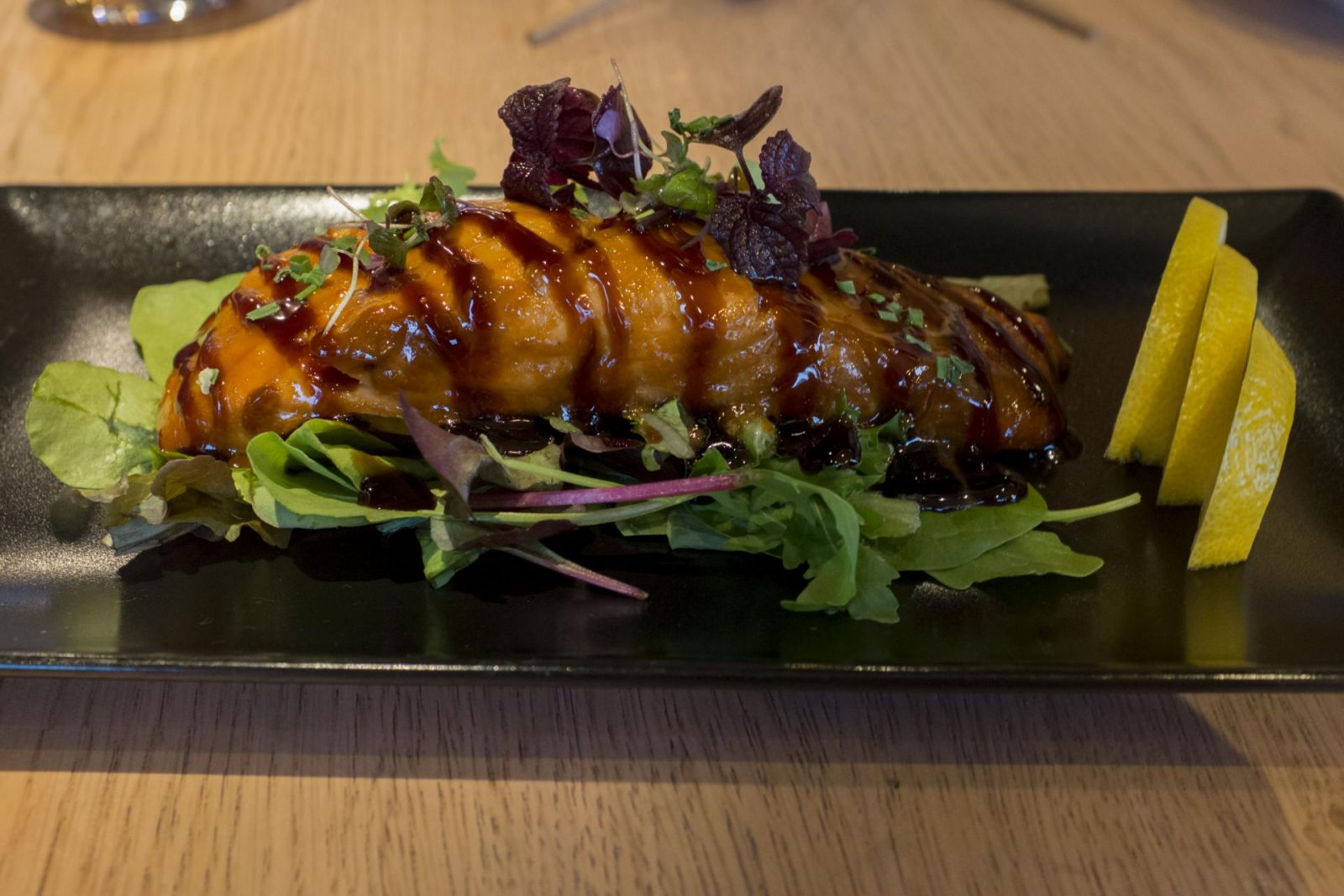 We also tasted the Turkey Insal which was grilled turkey in a kalamansi sauce. Hubby adored this and pretty much had the lot. As turkey goes it was fabulously cooked, without that horrible dryness that you often have. However, it was too salty for me and I could only have a little. It was very filling as was a generous portion; as a Christmas dinner should be. 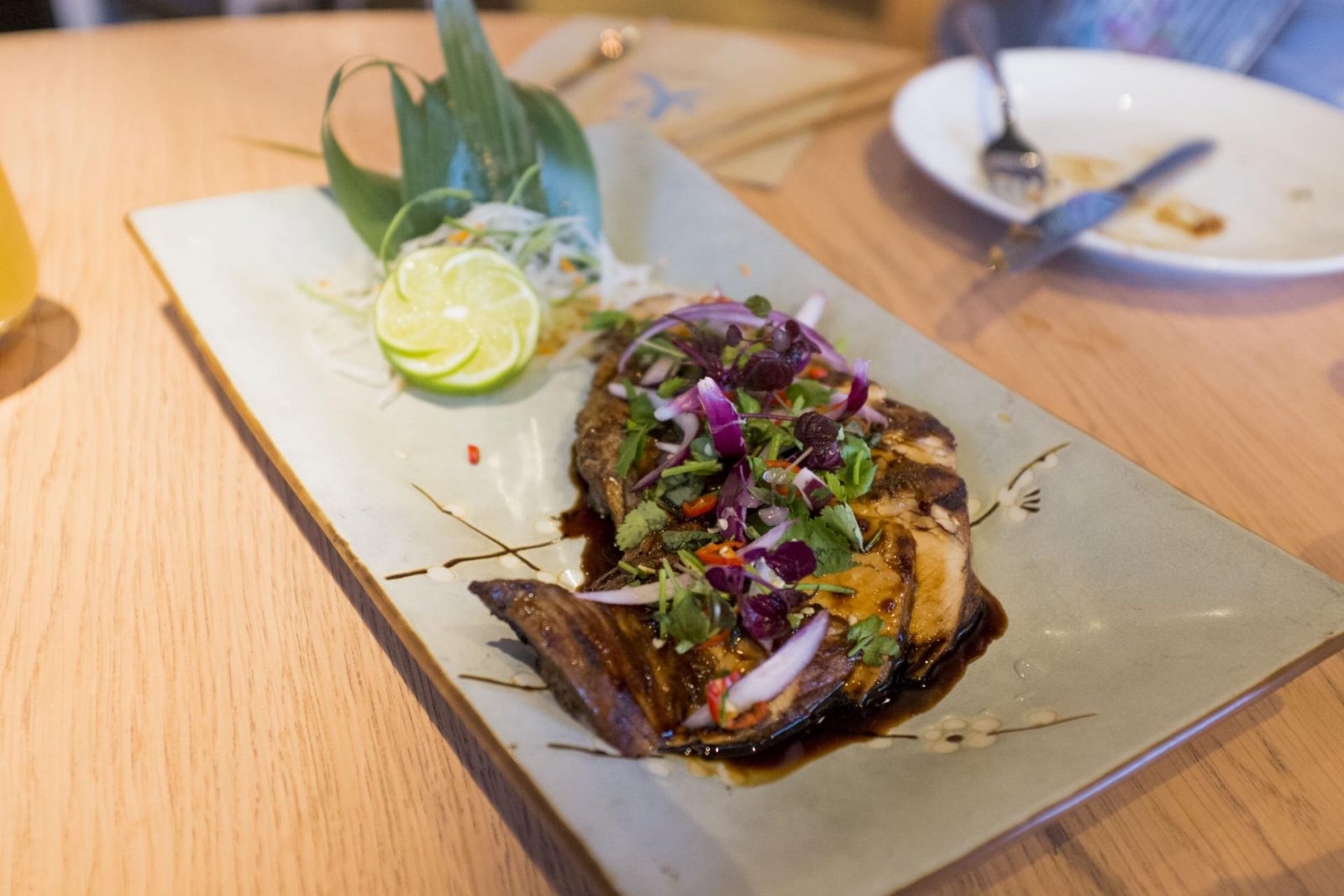 My favourite was the vegetable nyonya curry. Some moan about veggie options but it was fabulous and has got me back into stem brocolli at home. The sauce was spicy and tasty and went perfectly with the egg fried rice, the gremlin ate, on the side. I wish I could have curry on Christmas day! 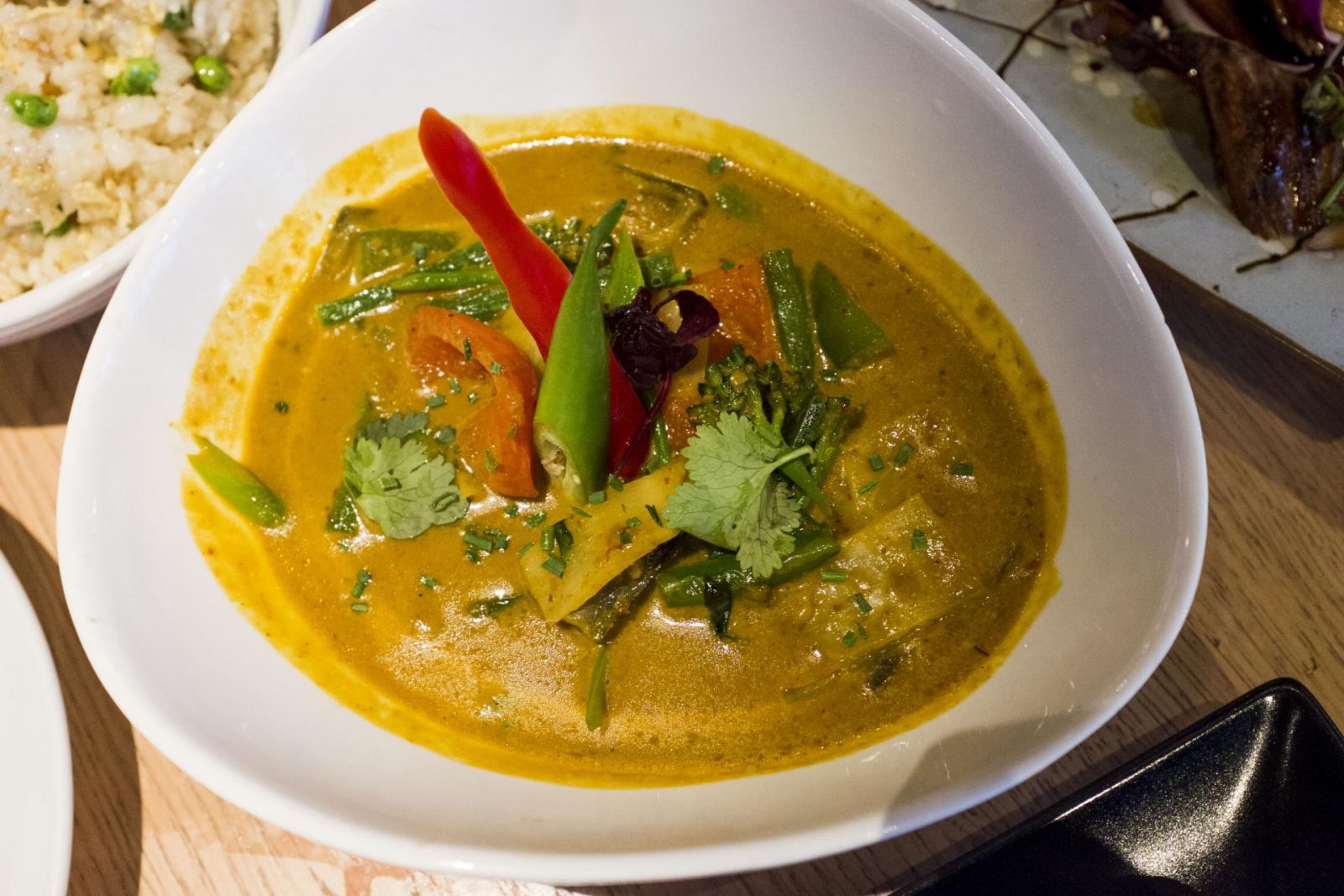 You could also have salt and pepper chips as a side dish but I would go for the rice; it was so tasty and soft. 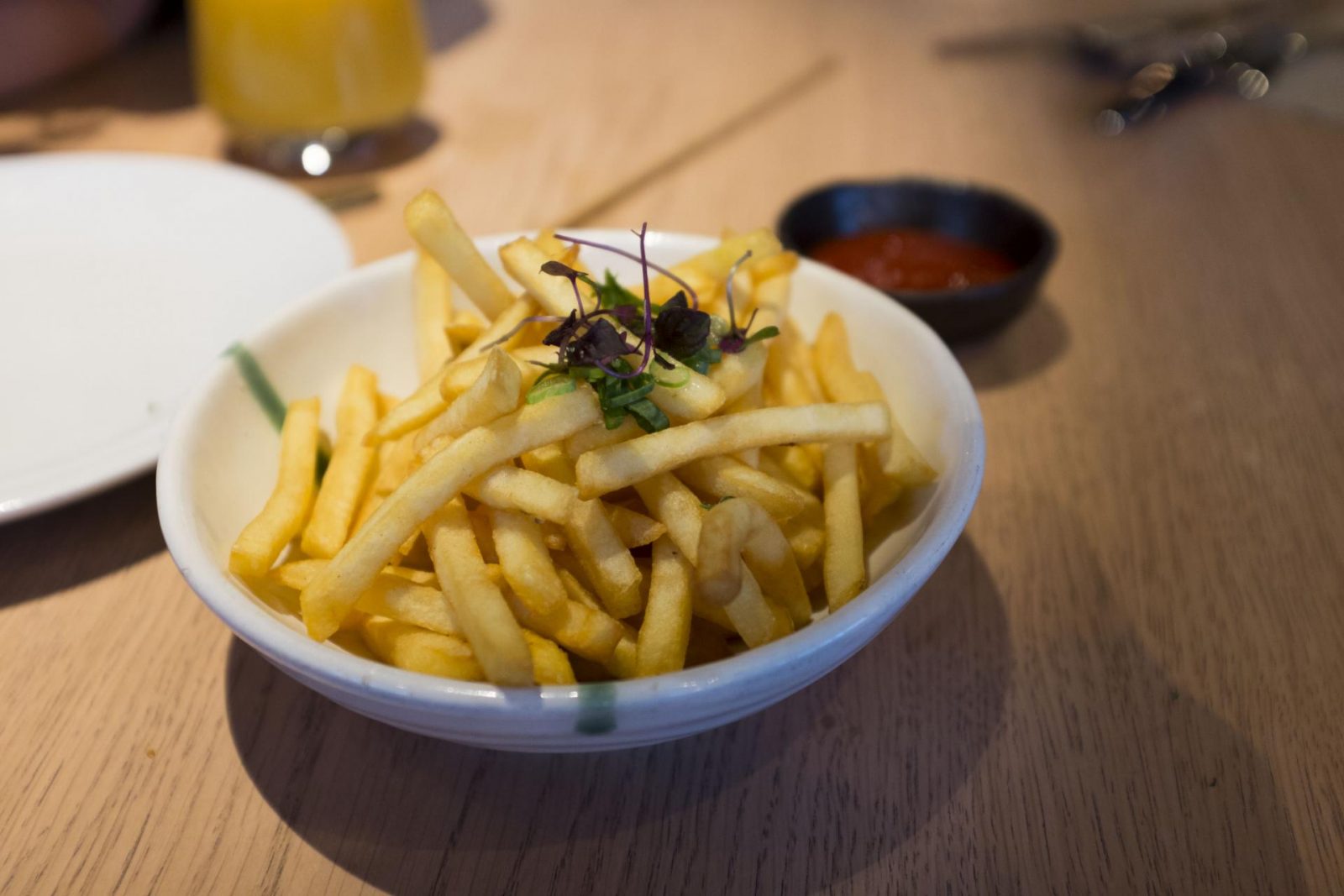 I did actually have some space left for dessert and the gremlin would not shut up about her chocolate brownie!! This was amazing! It was a warm chocolate brownie with clotted cream and custard. There isn’t much more I can say about how tasty it was. The brownie was soft and chocolatey. I had a fight with my daughter for how fast we could eat it and she was almost licking the plate. 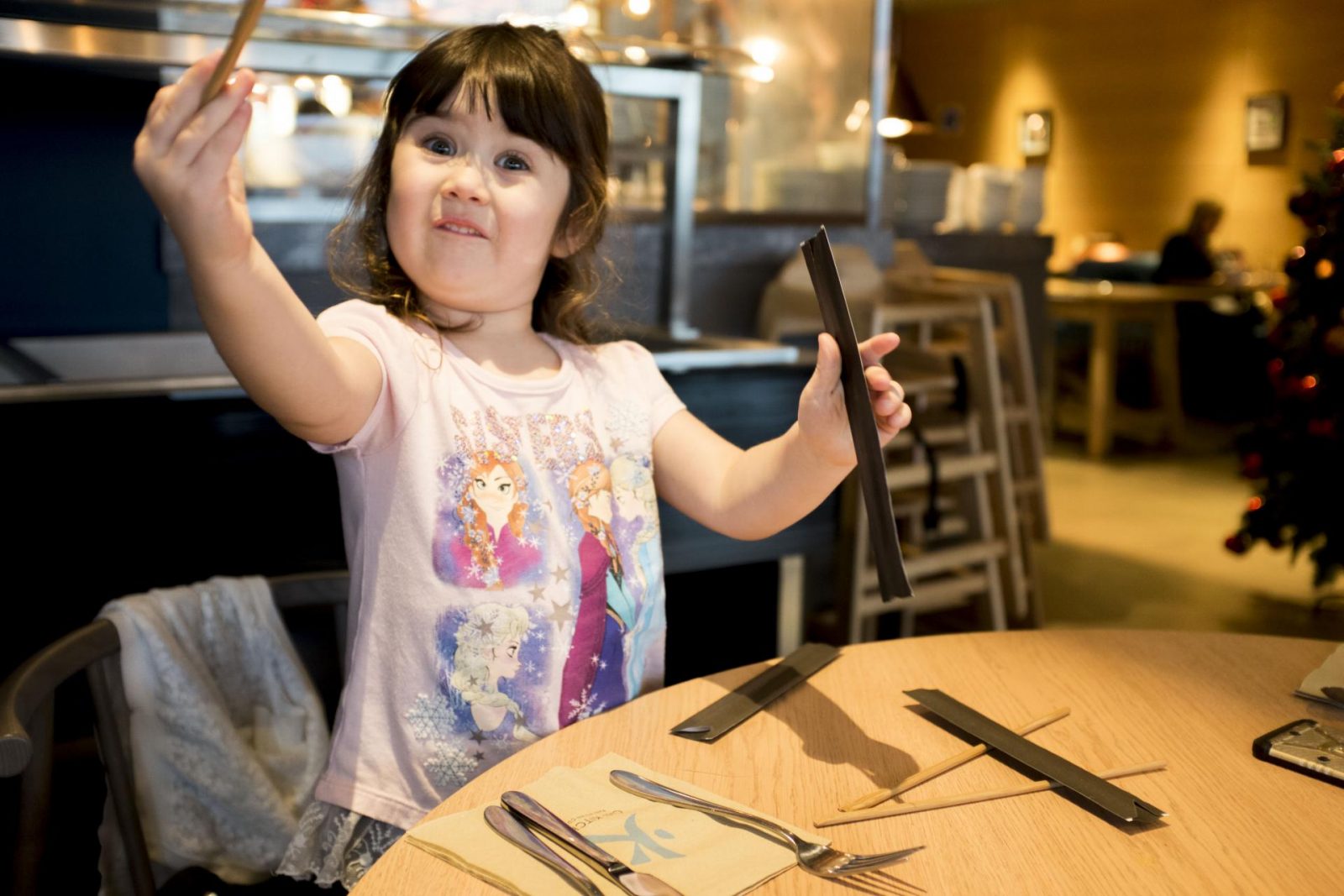 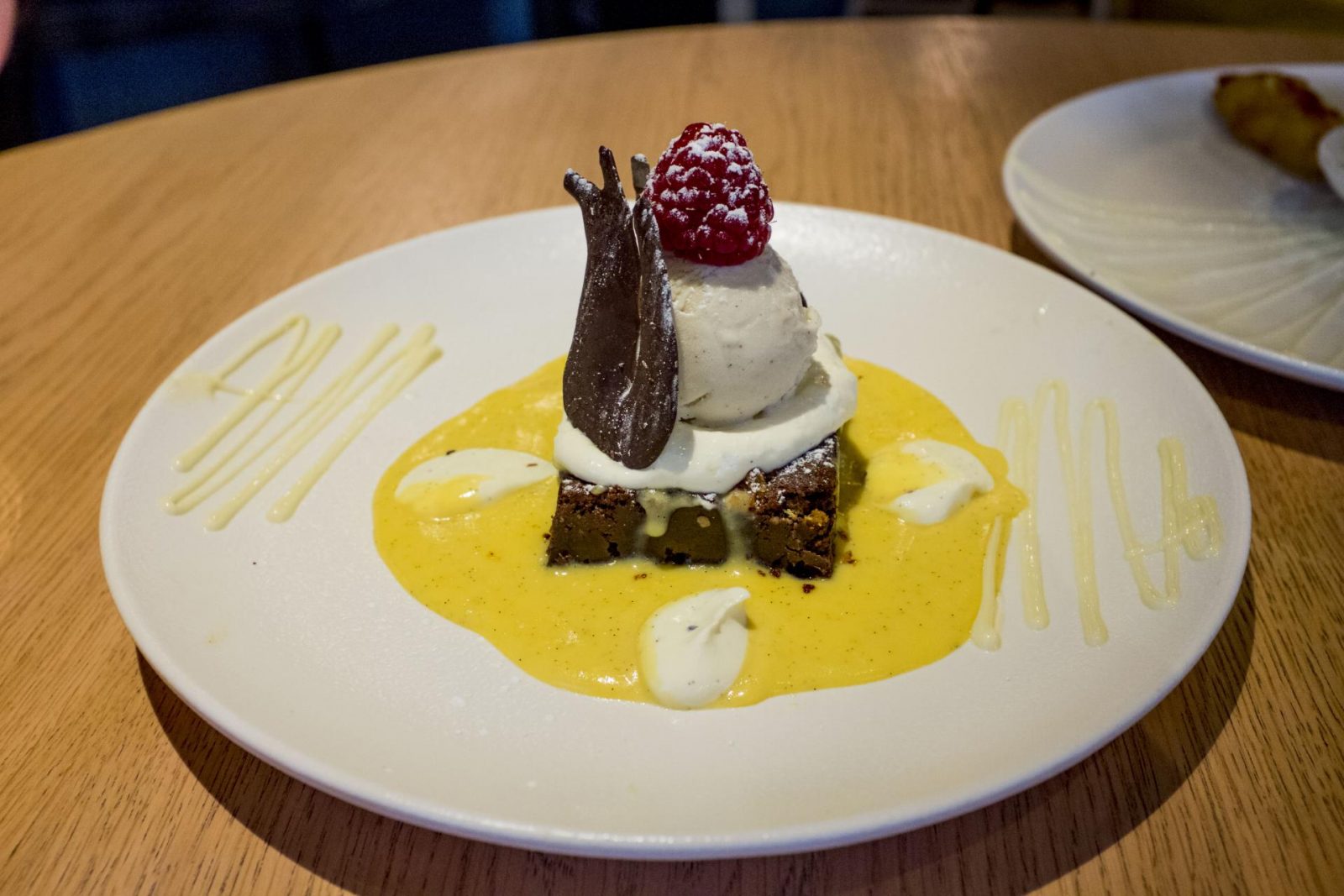 The second option was apple gyoza with vanilla ice-cream. This basically warm apple served in almost a deep fried doughnut. I’m not a huge hot fruit person but I enjoyed these and they were the much less rich option. A good one if you are starting to feel a little full. 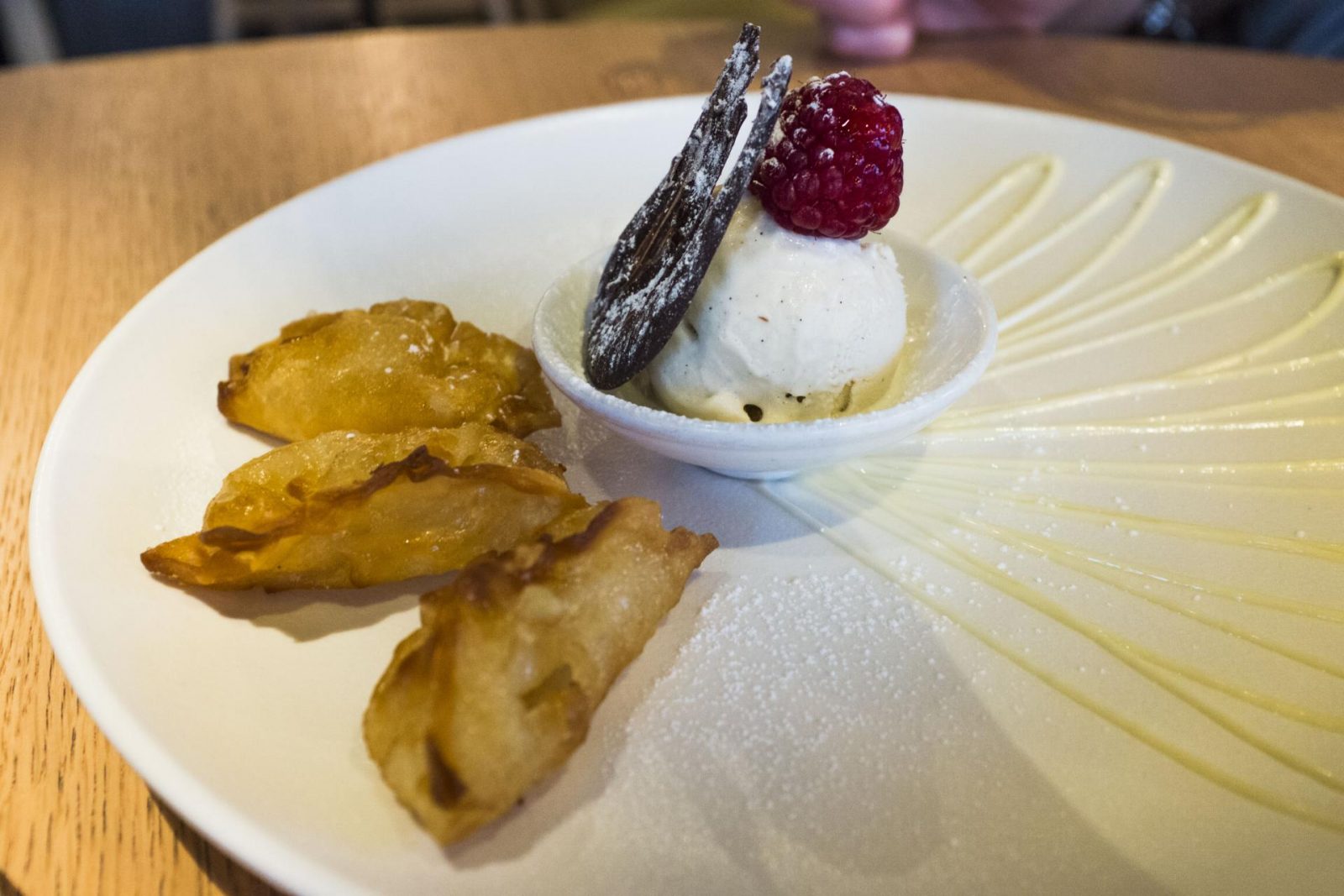 Once again we left Chi Kitchen full and satisfied. It was a delicious alternative to a standard Christmas lunch but not forgetting some of the Christmas traditions.

The service, as usual was fabulous and it was great value.

Disclosure – we were provided with a Christmas meal at Chi Kitchen for free. All thoughts and opinions are our own.