I hate smoking. Absolutely hate it. I know people who smoke; I love them and completely overlook it but it’s something I have never tried and don’t think I ever will.

I have often wondered what I would do if I caught the gremlin smoking. She asks questions about it and even though I don’t think I have ever told her, she is convinced you will die if you smoke (!). Not guaranteed of course but I want her to know it’s not healthy and not good for you. 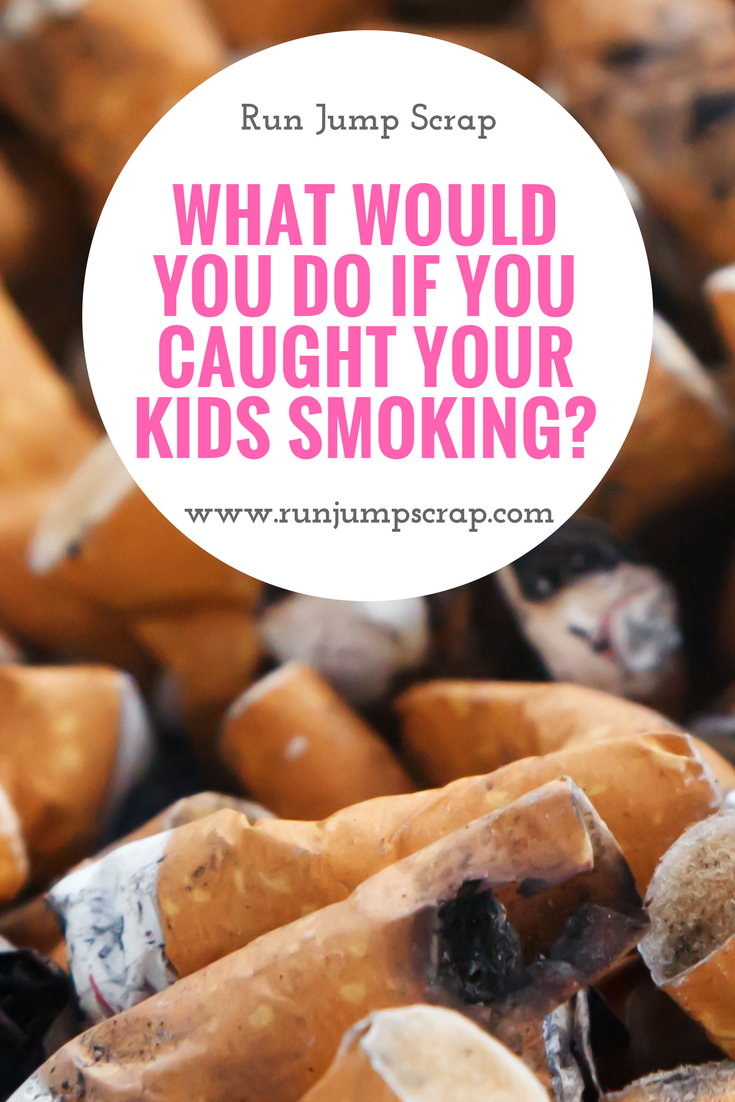 I wonder will she try it? With so many alternative nowadays like vaping with E-cigarettes being as popular, will it be as “cool” as it supposedly was when I was younger.

I think I would have to have a frank discussion about how sad and disappointed I was in her for smoking and probably talk about the negative affects on her health and bank balance. I often think it’s very hard with kids, as the more you want them to stop something, the more they do it!!

I asked a group of bloggers what they would do and here are their thoughts:

“I would tell them how disappointed I was and the fact it was bad for them and a waste of money. I would fail to mention that I did it when I was younger too.” Pete from Household Money Saving.

“I think that I would have a very frank and open conversation with them about their choice. Ensure that they understood the enormity of their decision to smoke. Actually show them evidence of what they are doing to their body. The more terrifying the better. Try to get them to understand why they made the choice to smoke and see what we could do to “ unmake “ the choice. I would try to be as understanding as possible. If that failed I would probably threaten to freeze them out of my will if they don’t pack it straight in!” Vikki from Family Travel with Ellie.

“I absolutely detest smoking. Marty used to do it and I hated it. Personally, they’d have a telling off and all pocket money would be stopped. I would be furious.” Jenna from And Then There Were Three.

“I’m not really sure, actually! It depends how old they are if/when I catch them. I think having a whole conversation surrounding it would be what we do. I’d probably start by asking them why they do it, what they get from it, how it makes them feel and then tell them about my own experiences. I’d definitely tell them I was disappointed and why I feel that way. If they were getting pocket money it would stop. Possibly grounding them.
My mum caught me for the first time when I was 8 and I was grounded for two hours before I was back out again!” Jade from Raising The Rings.

“We have had people die from lung cancer related to smoking on both sides of the family so I think I would explain the implications and risk. I would hope I can make them see that their life is worth more.” Nadia from Scandi Mummy.

“I would remind them of the grandparents they lost early to smoking related cancers. I would also express disappointment but open up the dialogue relating to why they are choosing to smoke. I wouldn’t be ‘ok’ with it but if having an adult discussion about it they continue it is there choice but that only stands if they are legally old enough.” Sophie from Soph-Obsessed.

“Show them dads scars from his heart bypass and let that be a lesson learned to the consequence of smoking!” Helen from Blogging Beautifully.

“Tell them I’m disappointed and re-explain how their Gran and my Grandad died from lung cancer and oesophagus cancer from smoking. I’d also tell them all the health consequences and repeatedly send them all my blog posts that are anti-smoking!” Victoria from Lylia Rose.

“I would really emphasise how uncool it is to smoke, unfortunately I think kids are less concerned about health – they think they’re invincible – but the thought of being smelly or having yellow teeth or people thinking badly of them might be more of a deterrent!” Kate from Ever After With Kids.

“I really don’t know how I’d react, that’s very much a ‘when it comes around’ kind of talk. I know I’d explain all the health issues and hope that they make the right choices to stop and support them if needed, I probably won’t be angry but do my best to educate them about all the problems surrounding smoking.” Sarah from Mummy Cat Notes.

“Probably make them eat a pack of twenty which was what I was threatened with when I was younger!! Seriously though, when we lived in Australia they have some seriously brutal anti-smoking campaign videos which are shown on regular TV – I don’t think many kids would stomach cigarettes if they could sit through watching one of these graphic videos; I’d some them a good selection!” Emma from The Money Whisperer.

“Depends what age. They would have got them from somewhere and being underage my concerns are who did they get them from? Who did they get them from? Is someone selling fags to under age buyers? Is there an exploitation issue? Said with my ex police hat on.  I would be disappointed as it’s not a healthy habit and would find out why they felt the need to smoke.” Nellie from Nellie Pom Poms.

I think it’s a tough thing to approach and like any parent, I’m hoping it won’t be something I have to deal with. I don’t want there to be arguing and ultimatums but calm, rationale, informative discussion.

These bloggers have given me some guidance and I hope they help you too!