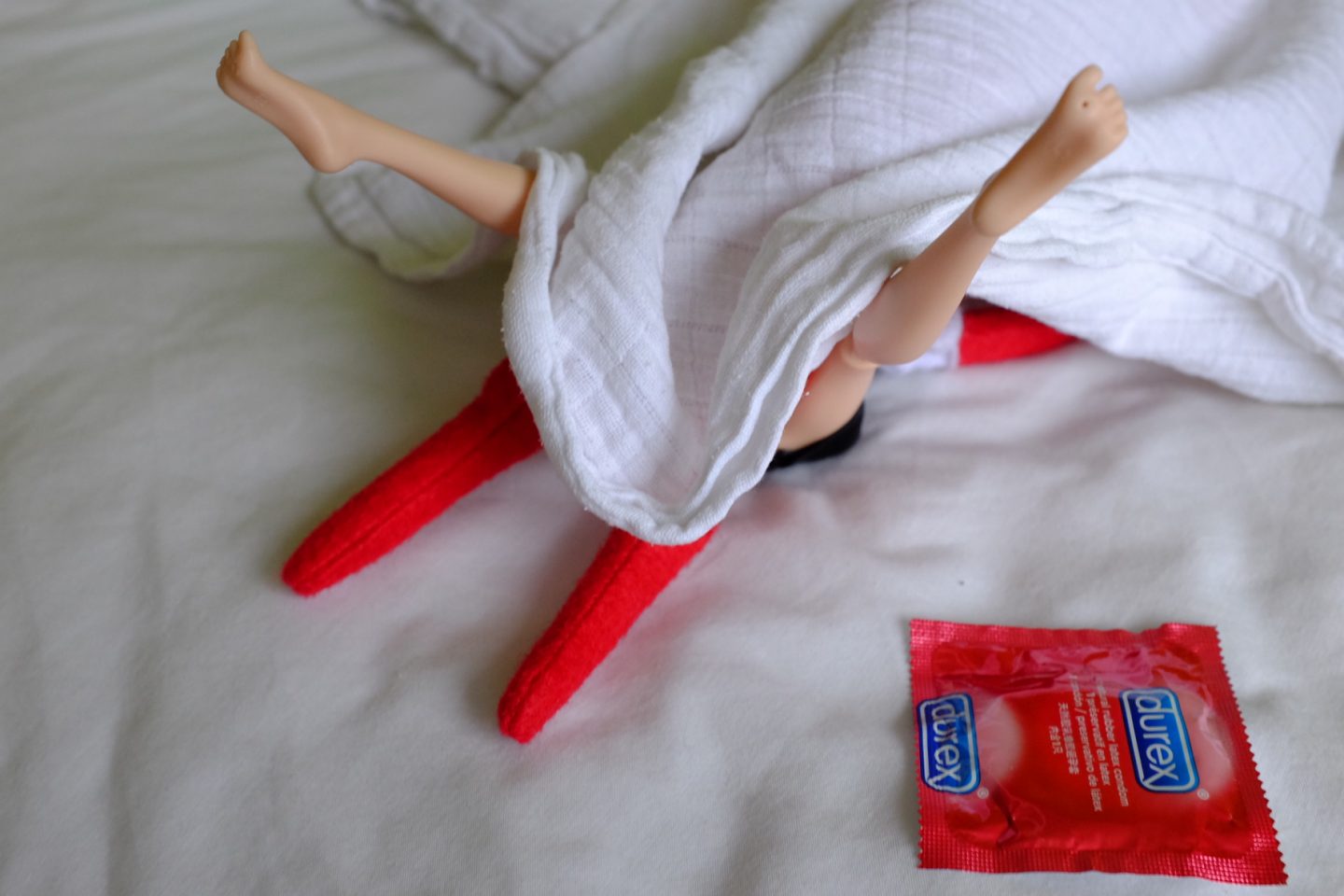 I was not a huge fan of Elf on the Shelf, pretty much until my eldest went into reception. You may like my post entitled I hated Elf on the Shelf but I Changed my Mind. I did change my mind. Completely. I used to think the Elf was a bit of a waste if time. More effort at an already busy and quite stressful time. But I mellowed, I mellowed a lot. It’s fun introducing your Elf to the kids on December 1st.  I realised these mischievous little Elf were actually a lot of fun. It’s quite a laugh placing the title things in funny situations, getting stressed when you have gone to bed and realising you have forgotten to move it! Or, even worse, having to sneak down in the morning to move it, as you completely forgot the night before. We are usually quite simple with our Elf, never that elaborate and it’s quite easy to keep on top of. But my husband has a fun streak in him and when I suggested we took some naughty Elf on the Shelf pictures and came up with 15 adult Elf ideas, he was well up for it!

Now of course these ideas are not for little ones but if you have older teenage kids, living with other adults or are just a couple up for having some fun with naughty Elf ideas, this is the post for you. We came up with 15 Naughty Elf on the Shelf ideas.

Naughty Elf on the Shelf

Our naughty Elf has got up to quite a lot recently and hubby and I had a good laugh making this post. It was quite tricky not to be too illegal or offensive!! You’ll have to let us know in the comments if we went overboard!

So without further ado…what has our X-rated Elf been up to now?

We had to have the obligatory Elf and Barbie meeting, making sure both were being very careful when enjoying themselves! Better to be safe then sorry!

My husband took great delight in grating some carrot and mixing it with juice and cornflour. It’s amazing what creative juice get flowing when trying to re-create vomit!

Poor Elf has been on my husband’s mini bottles and is a little worse for wear! I guess he’s not used to getting hammered on shots! 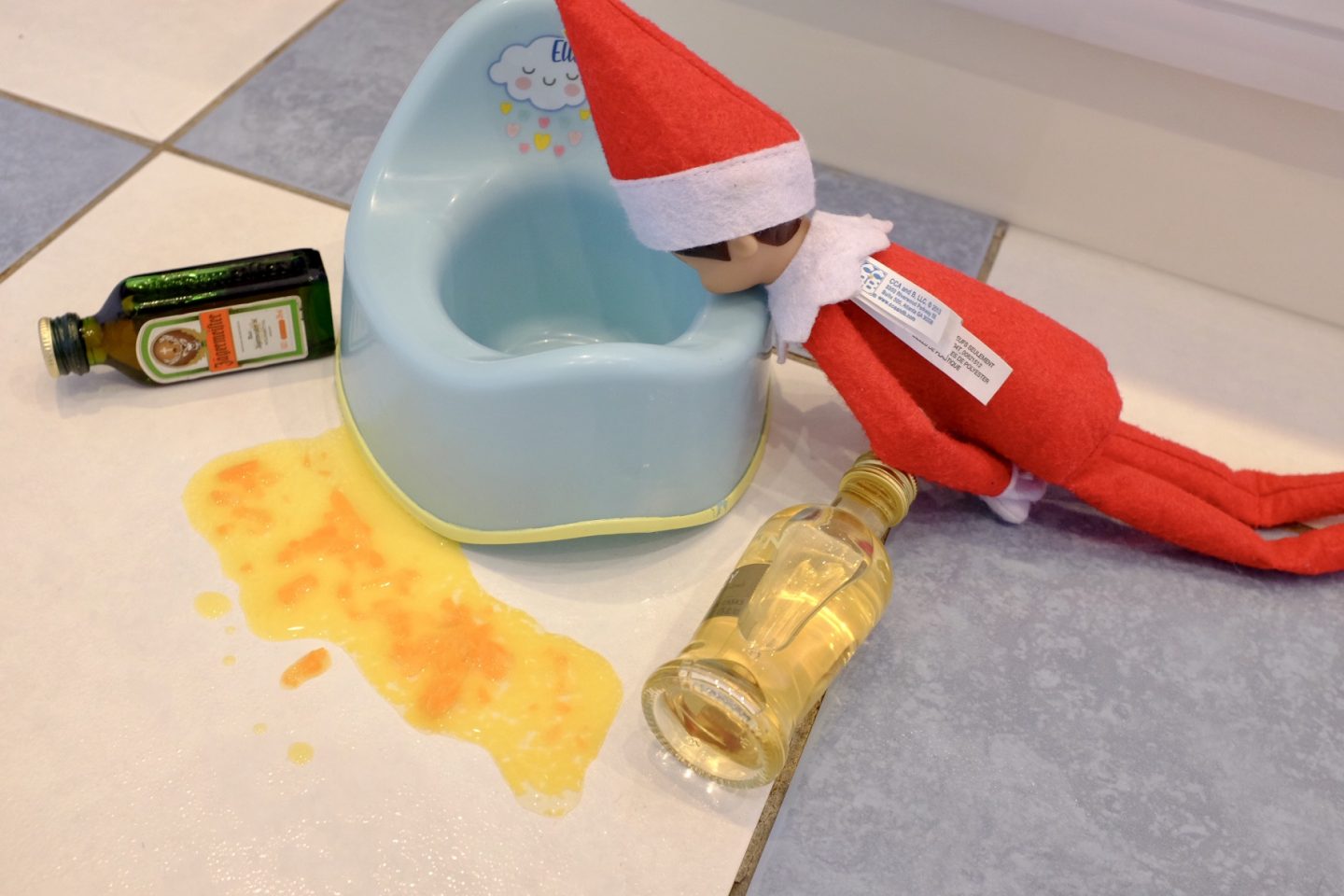 Now we are all about empowering the ladies here and also making the Elf learn some new tricks. His pole dancing skills are second to none and think the dolls had a good time watching!

My hubby found a skewer for the pole! 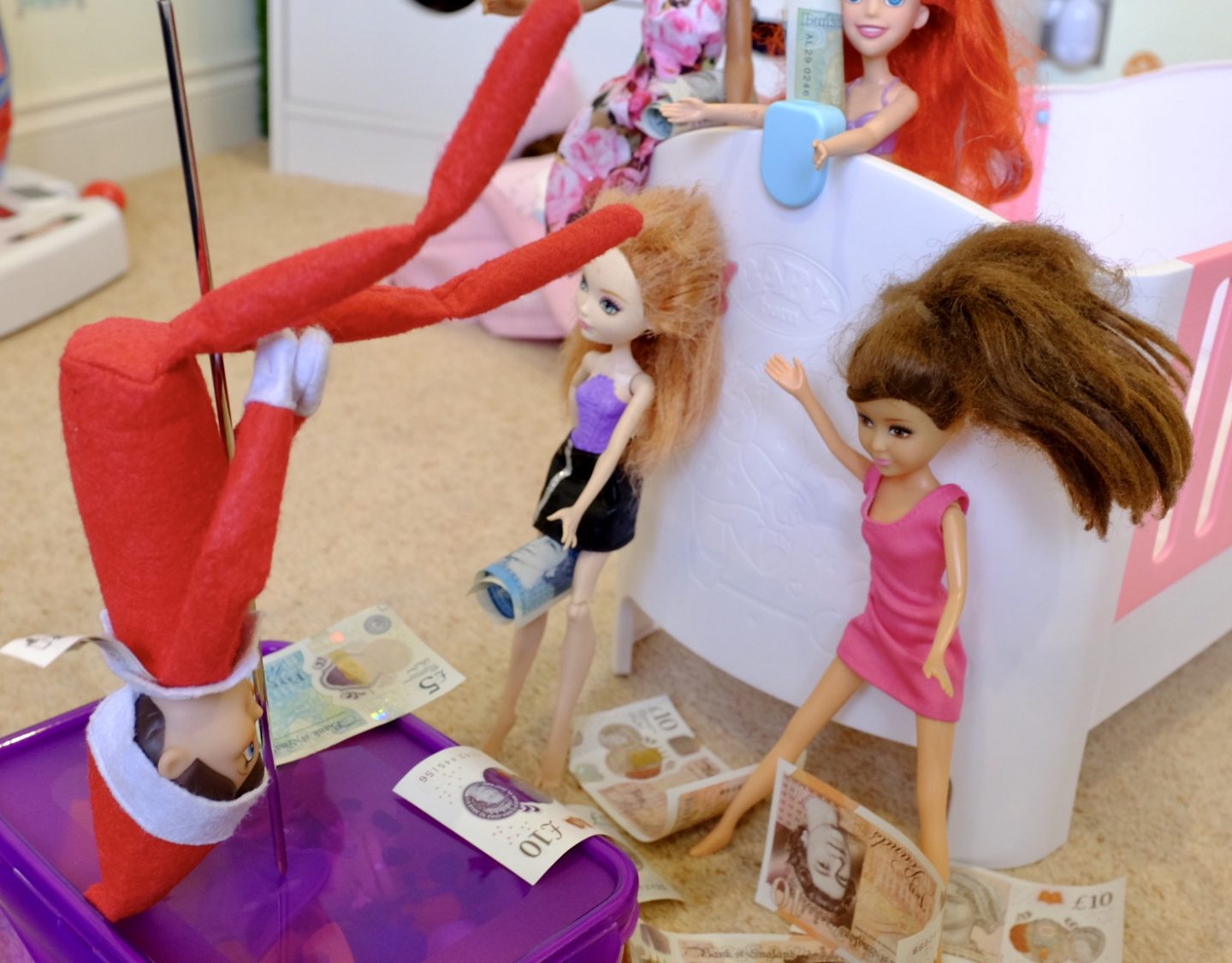 Elf Goes to the Casino

We are huge fans of the Sopranos in this house and this means a trip to the Casino for our Elf. I’m not sure how good he is at 21s though? Moana is in charge of the cash! 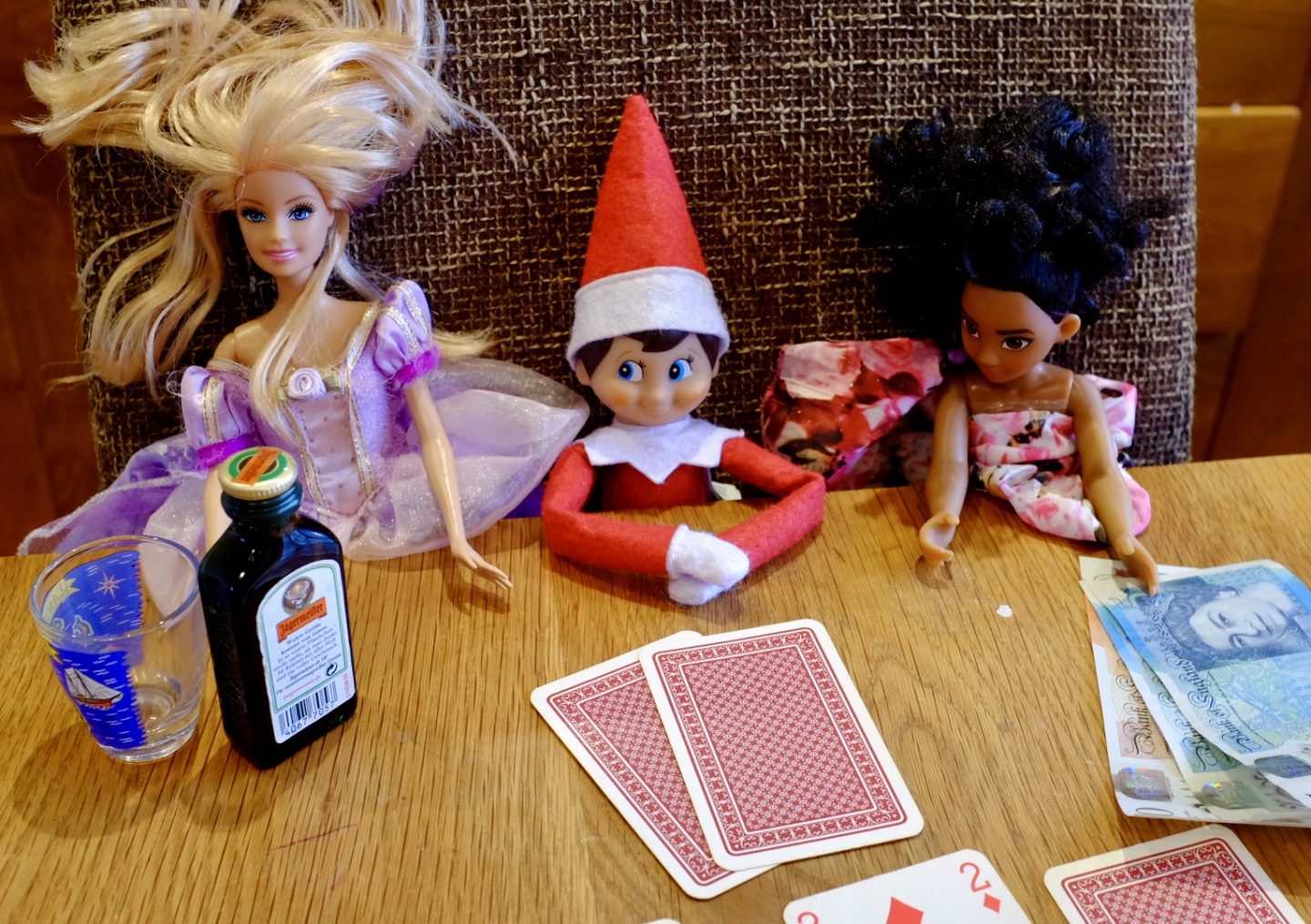 Not only do we love The Sopranos, we are also pretty firm fans of many other Gangster films, including Casino, Heat and Goodfellas.

My eldest’s Zane (from One Direction) doll is looking a tad worse for wear after a run in with our Elf. I hope my eldest wasn’t too bothered about us using up some of her precious ketchup! 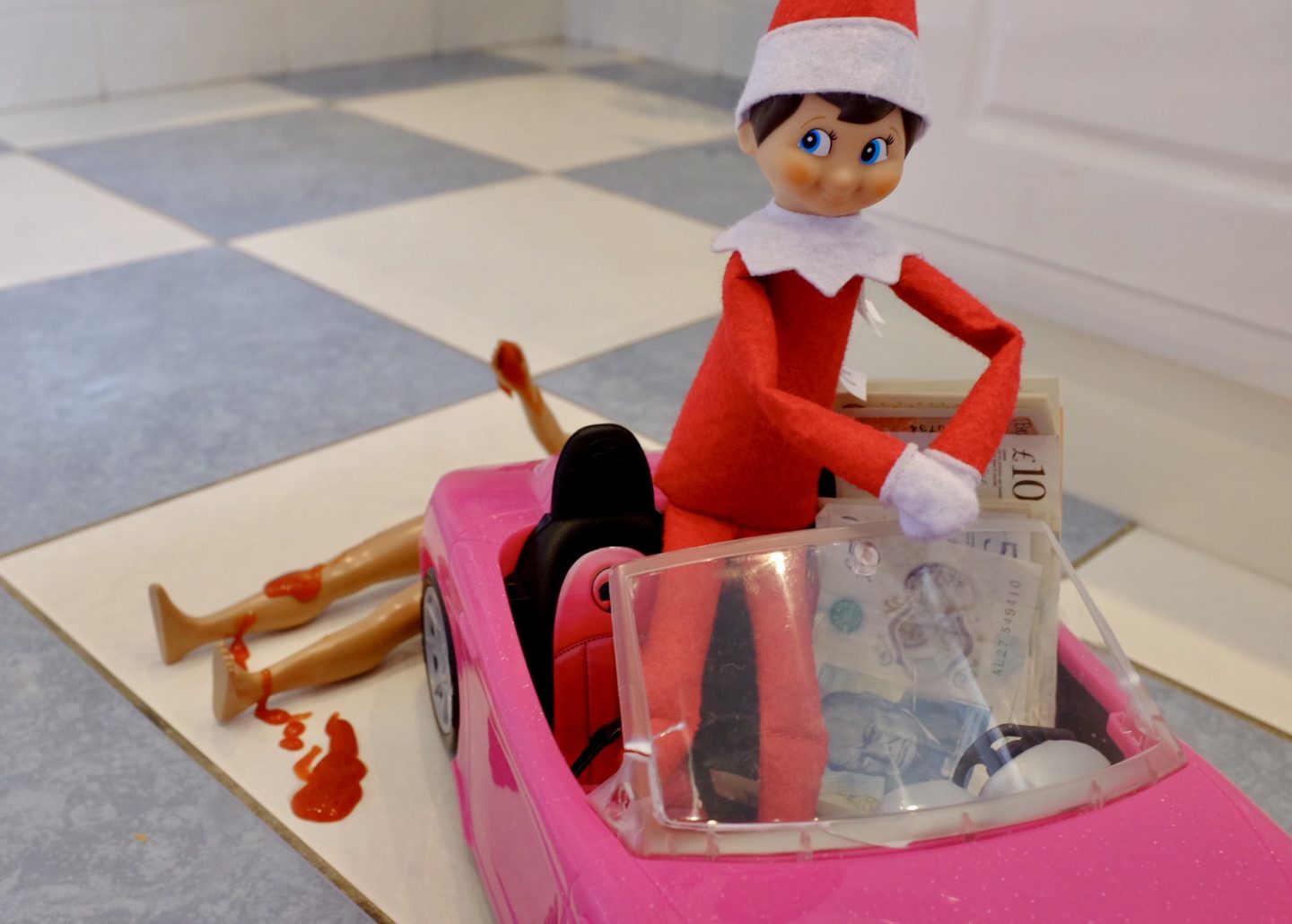 There is so much fun for the Elf when we let him loose on a dark night to surf the web. Hoping my Mac Book isn’t left in too much of a state eh? Dirty Boy! 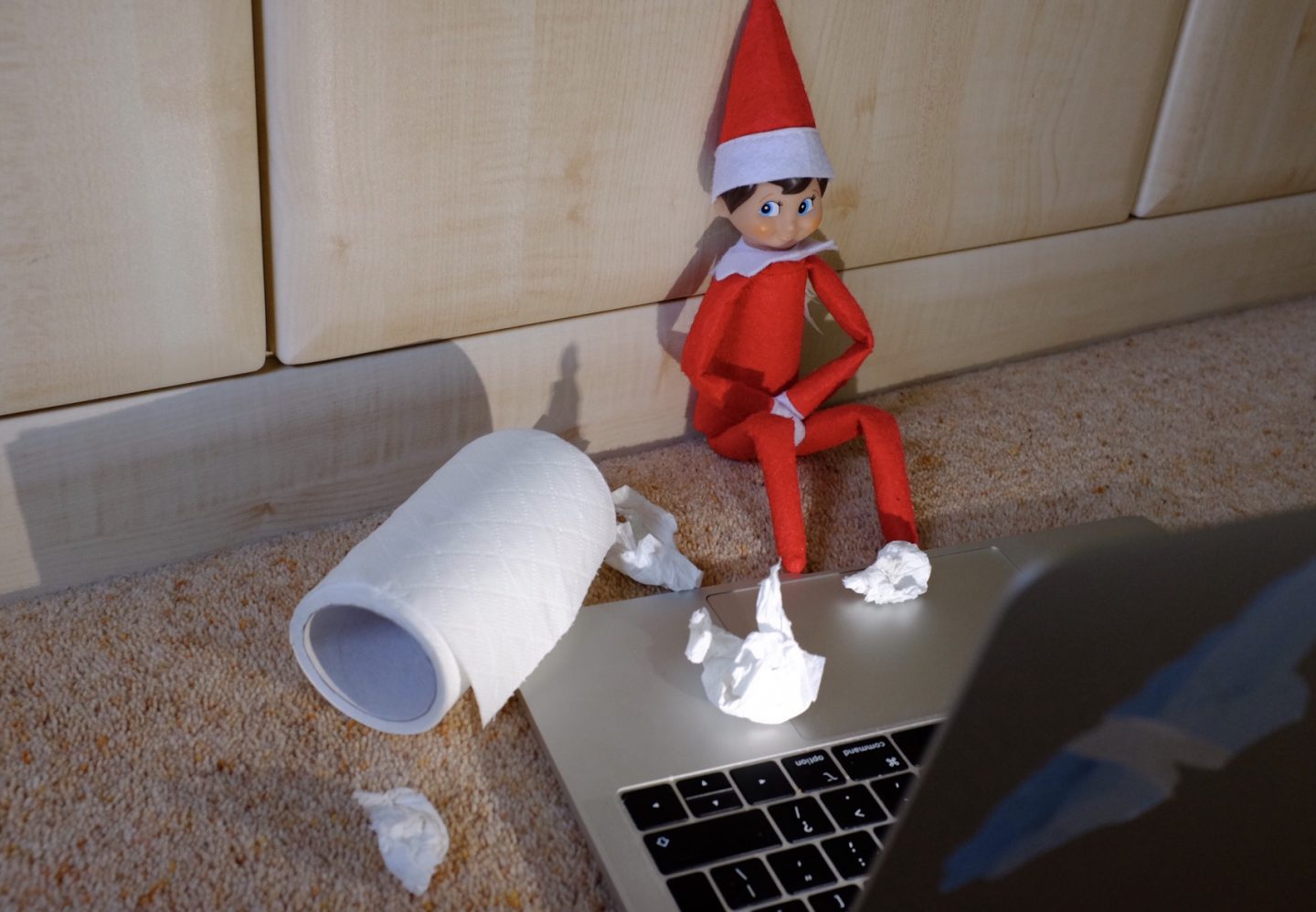 Elf Gets an Extreme Piercing 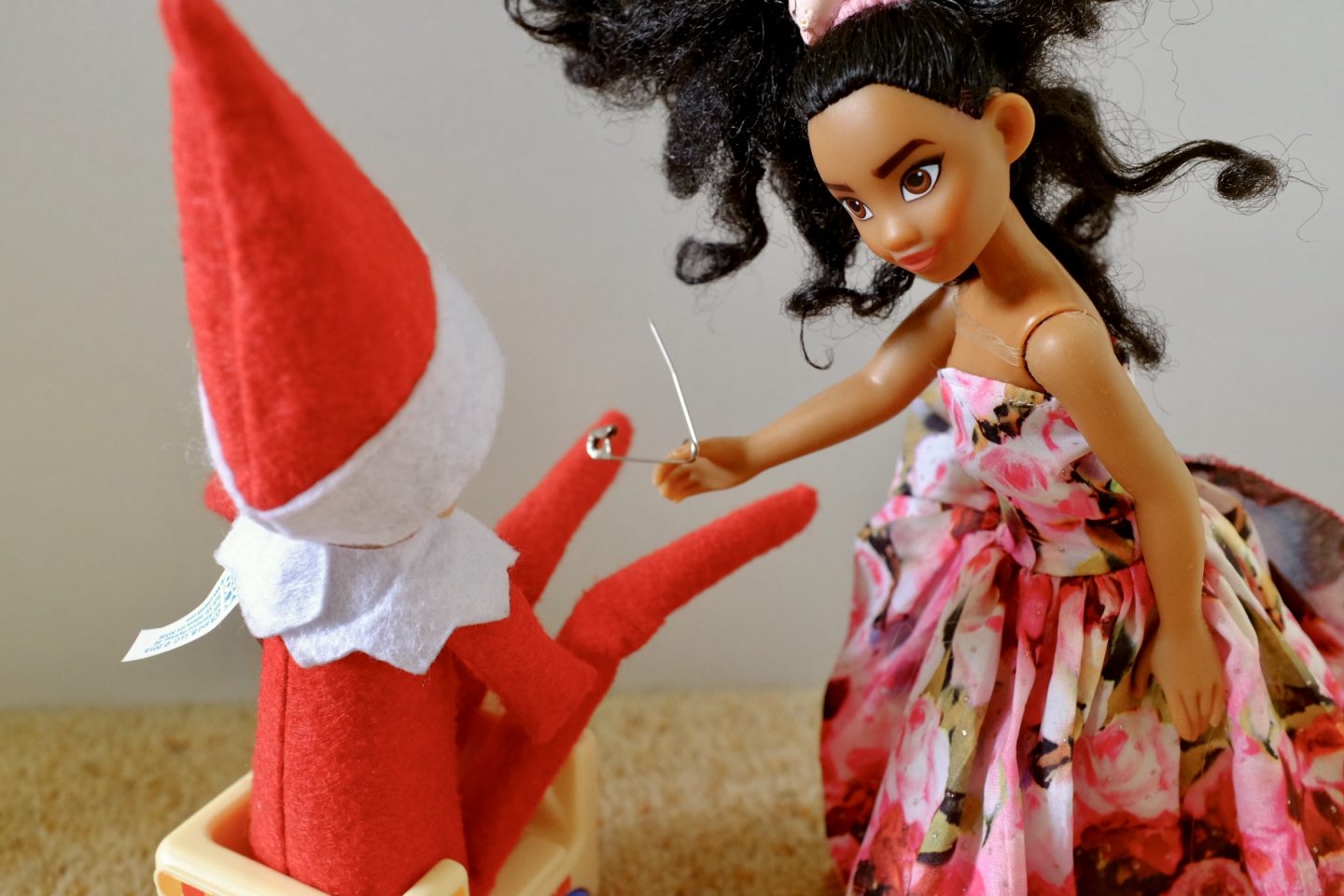 Elf is a bit like me in the respect if he eats too much, he suffers afterwards! That or he’s a bit intolerant to something! (It’s BBQ sauce by the way!) 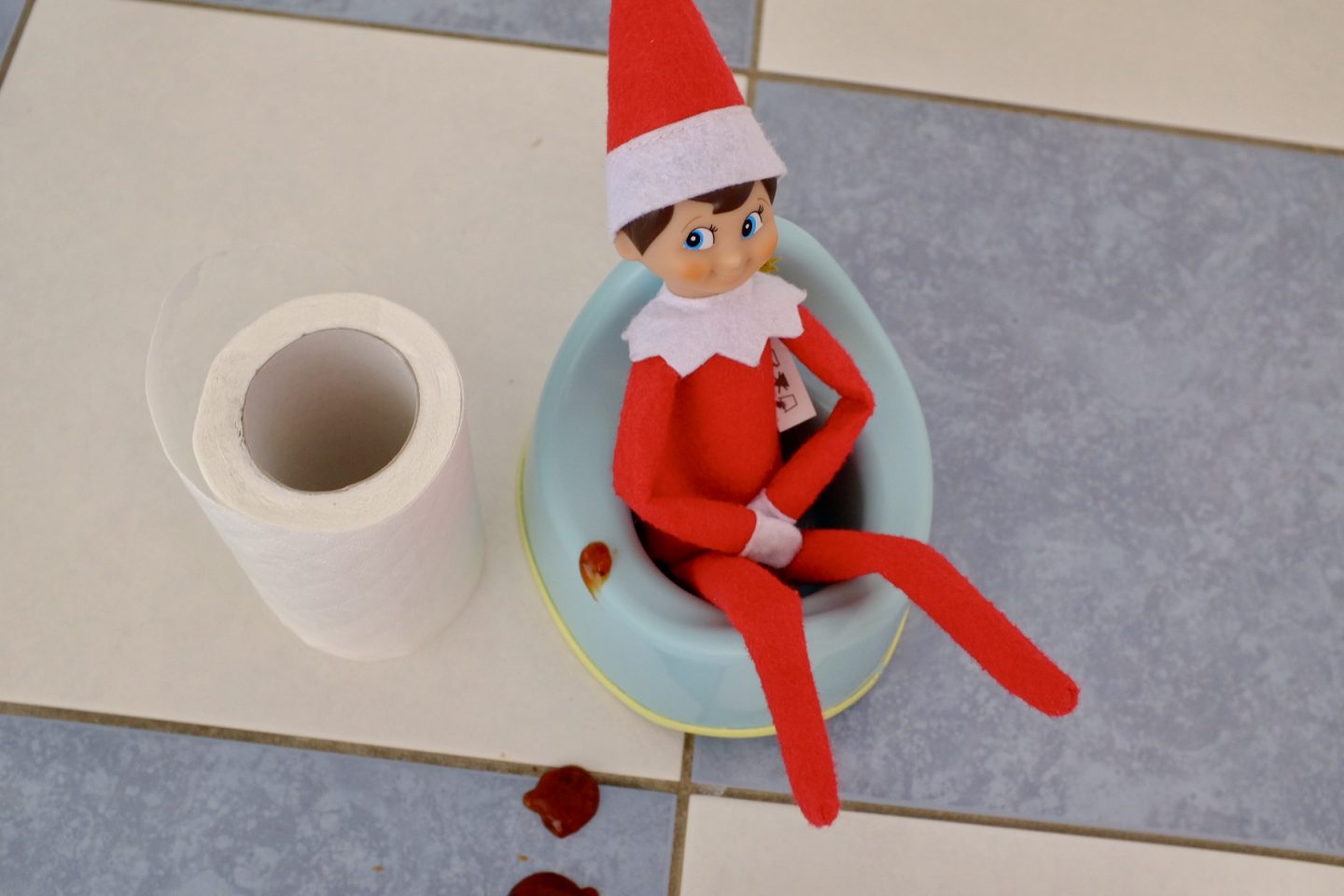 Elf Doesn’t Wear a Mask and He Isn’t Exempt!!

We all should be wearing a mask right now during the Covid-19 pandemic but naughty Elf isn’t complying and no, he’s not exempt from the rules!! 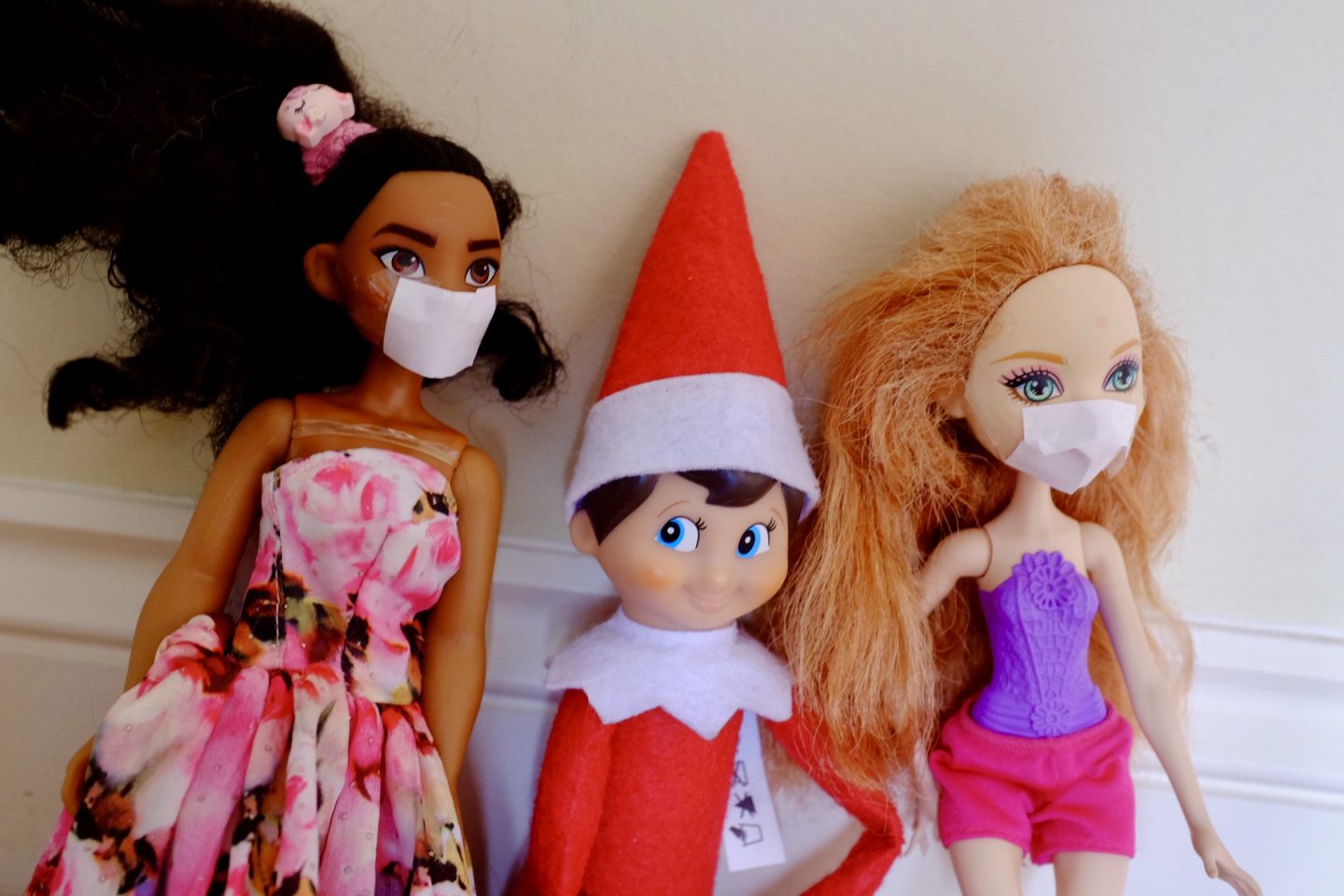 Elf got a little bit more than he bargained for when he took his dog for a walk. Well he may have know what he was getting himself into!! Ahem. 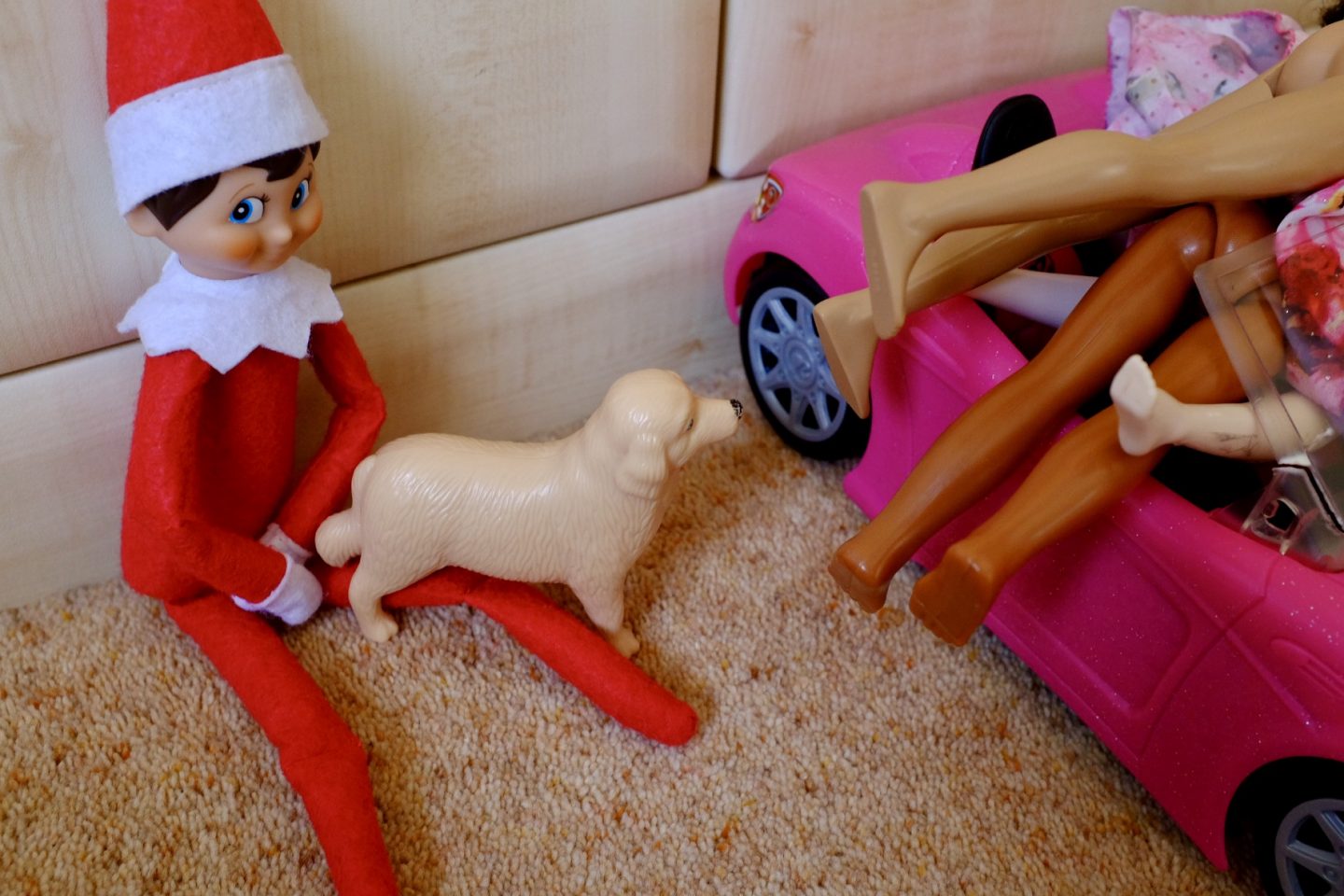 Elf is a huge fan of the Home Alone films and he got a bit over excited when Cubby The Curious Bear came to visit! Call him Kevin from now on please. 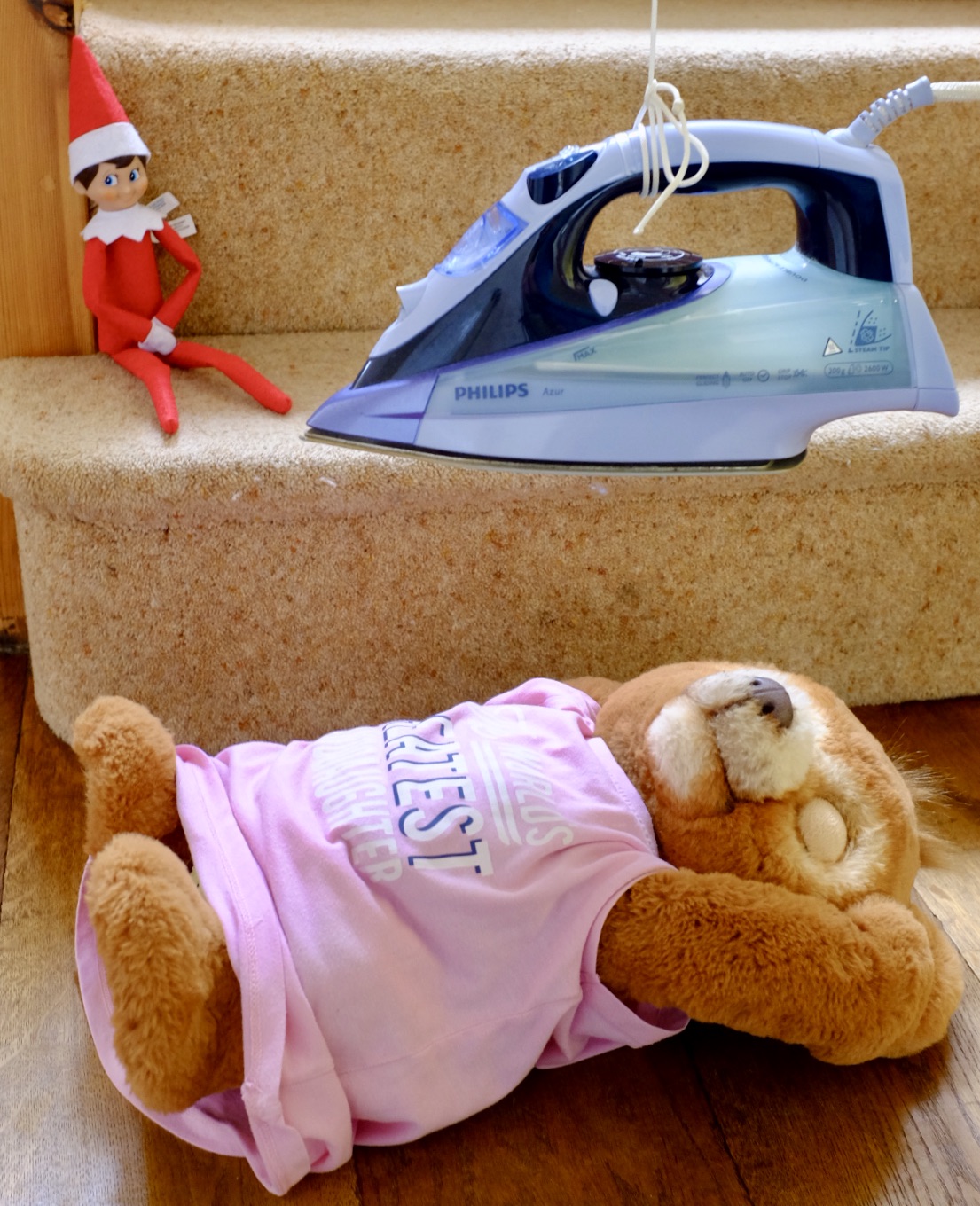 Elf Contacts The Other Side

Elf really loved watching so many Halloween films recently and he has got himself a little carried away. Out came the ouija board! I didn’t hang around long enough to see what happened next. 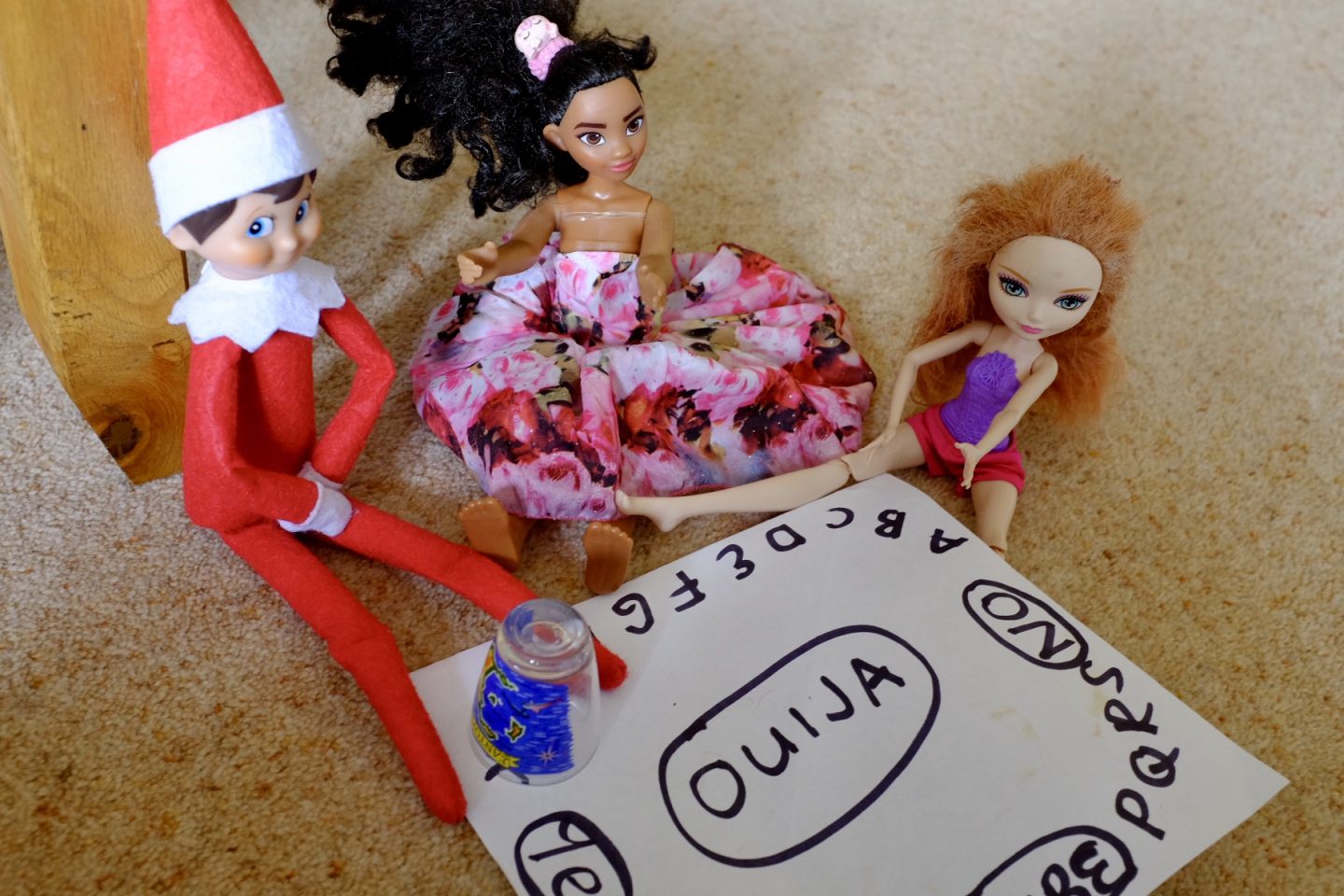 Elf got a bit tangled up in some jewellery when he attempted a robbery! 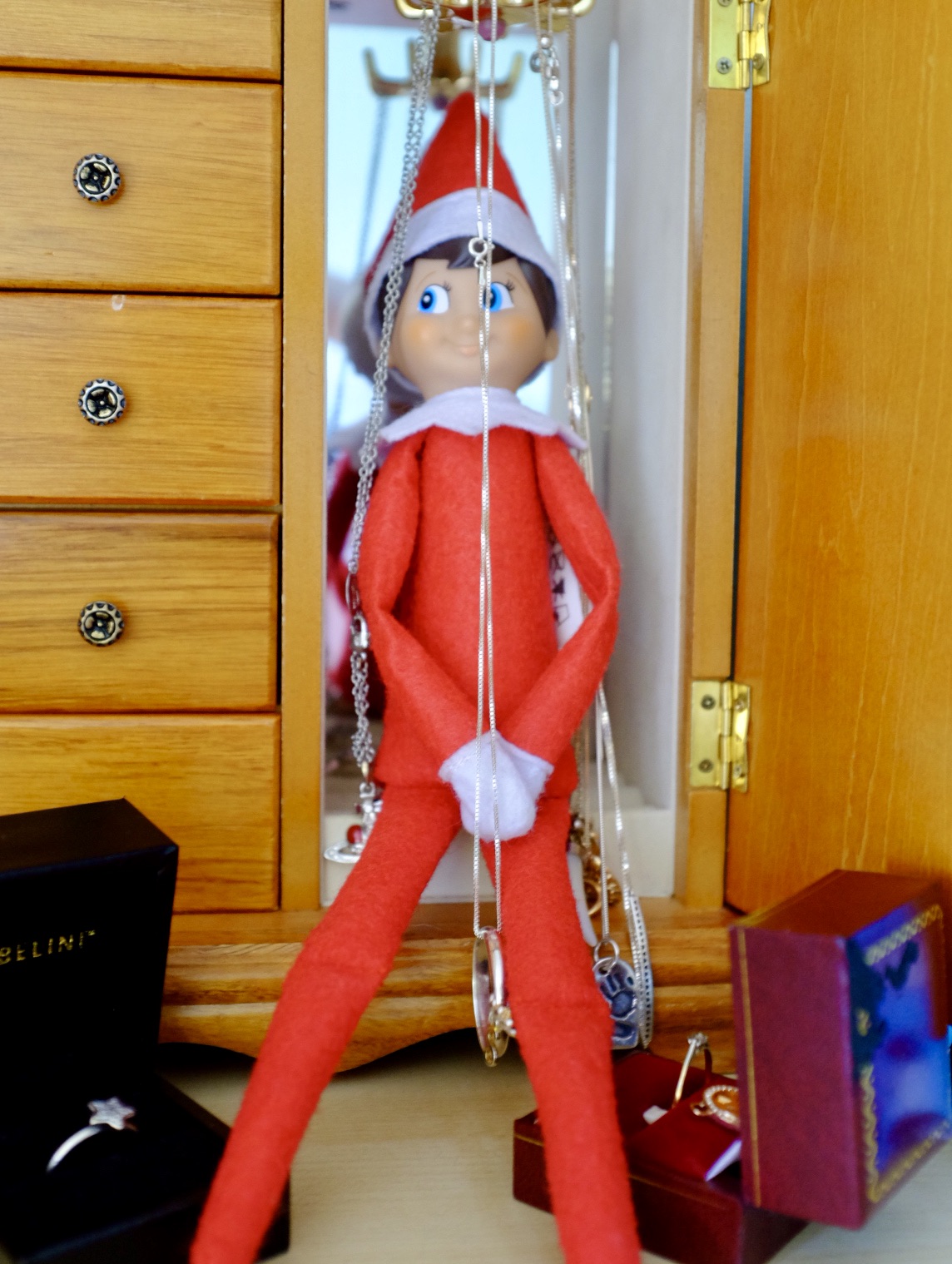 Elf loves to use all his senses, especially when he finds a knicker drawer to hide out in! Nice eh? Let’s just hope he folds and tides them up afterwards. 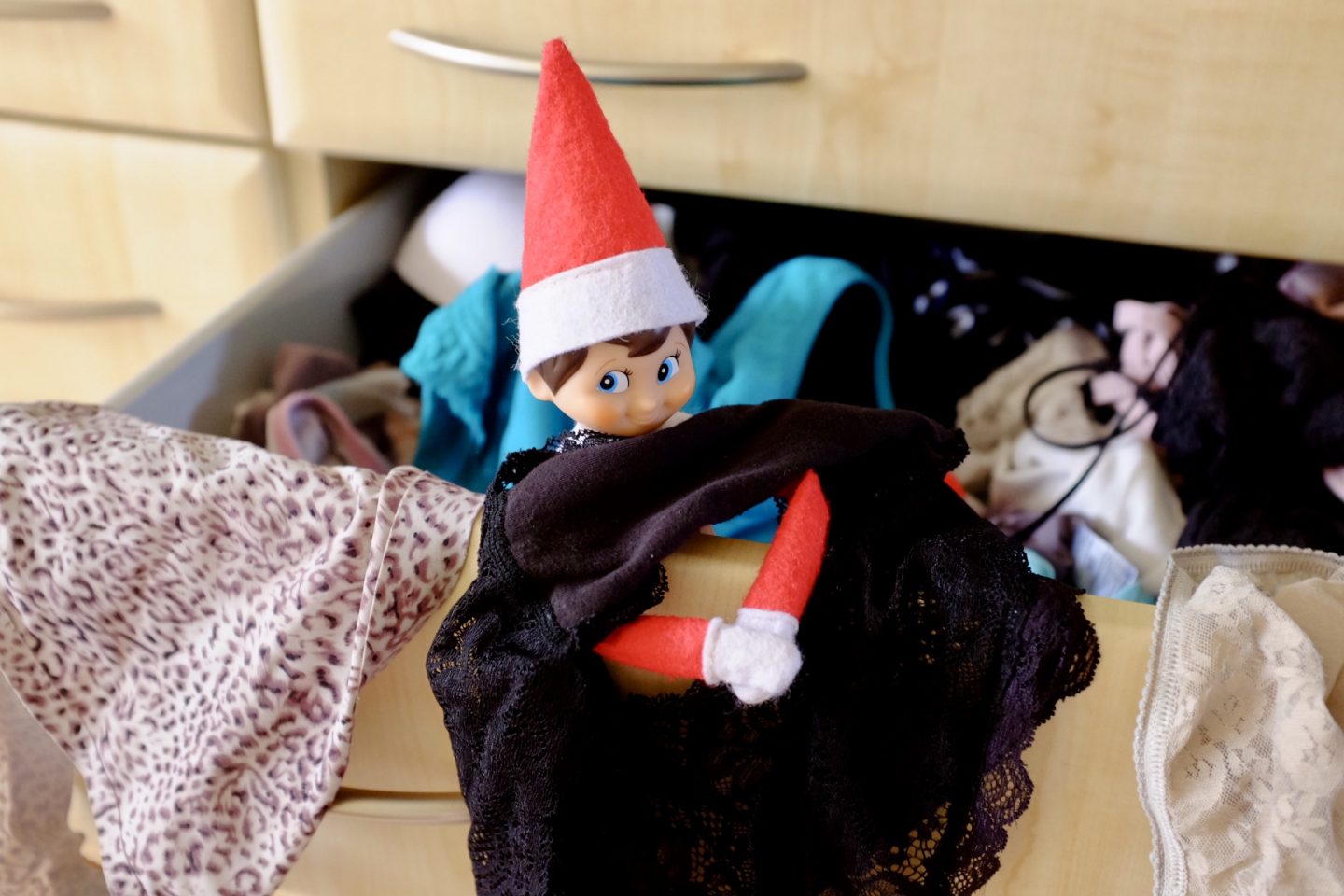 Now and then Elf needs to sort out his more intimate areas and with a quick wax from one of his doll friends, he’s good to go! 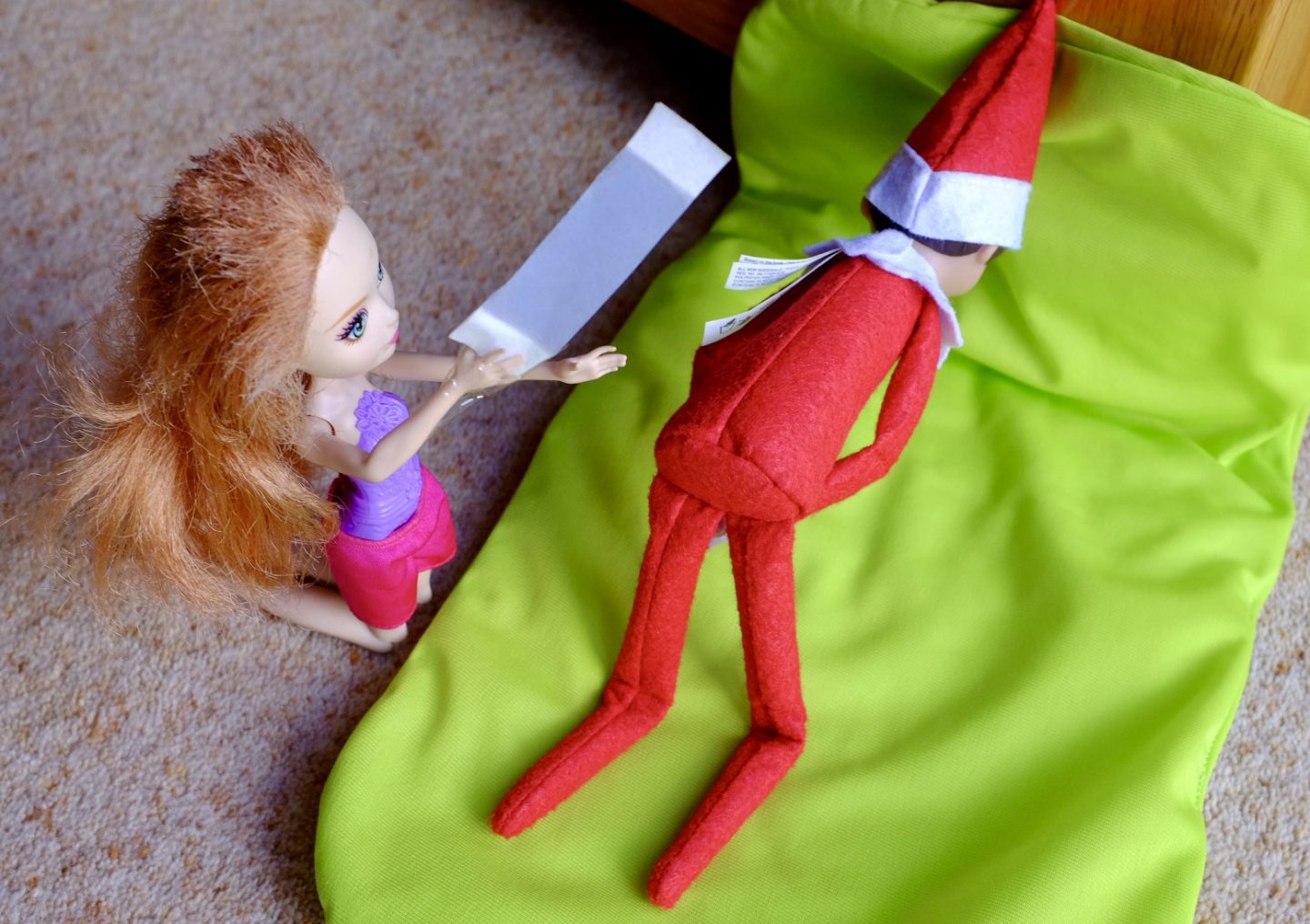 My husband and I had such a giggle with these Elf on the Shelf Naughty Elf Ideas. Snapping the pictures when the girls were at school and sneaking around. I hope they give you a giggle and make this year’s Elf on the Shelf a bit more X-rated and fun! Fun for the adults for sure! 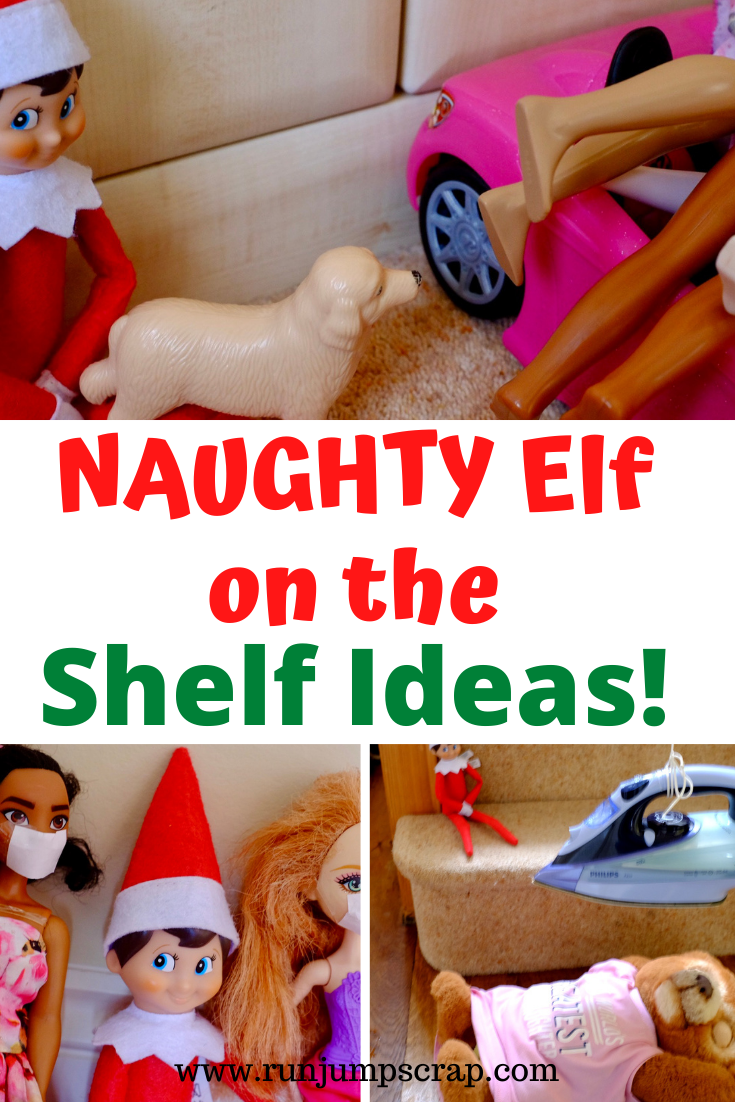