I remember writing a post a couple of years ago saying why I wouldn’t let my daughter eat chocolate for breakfast on Easter Sunday. Have things changed? 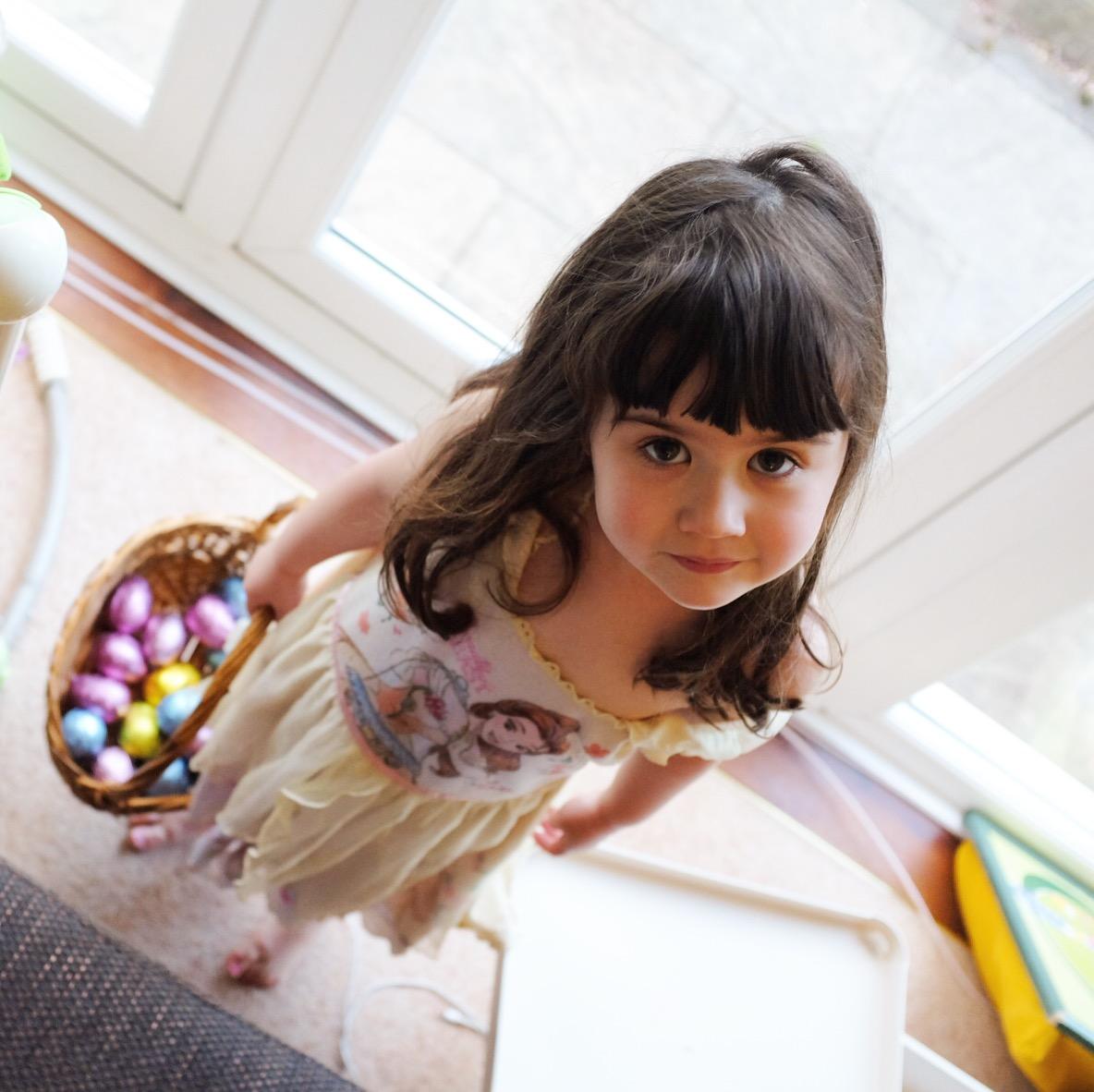 Anyone who is a regular reader of my blog knows 1) I am a dietitian 2) my daughter is OBSESSED with chocolate and always has been 3) I have to wrestle chocolate out of her hands sometimes.

I do find Christmas and Easter a bit hard for my silly brain, as there is so much chocolate around. I’m all about moderation and of course we have to enjoy our food but still, there is just so much food.

Tactics to get through this include breathing deeply and getting my head around the fact that the gremlin will have a few days of more treats than normal.

To answer my first question though, I haven’t changed and I cannot let her have chocolate for breakfast! I just CANNOT do it. My dietitian brain cannot give in. Yesterday she had a boiled egg and soldiers before I could let her have a mini chocolate egg from her hunt. Then she had a rabbit chocolate lolly after she ate her roast, including meat and vegetables. 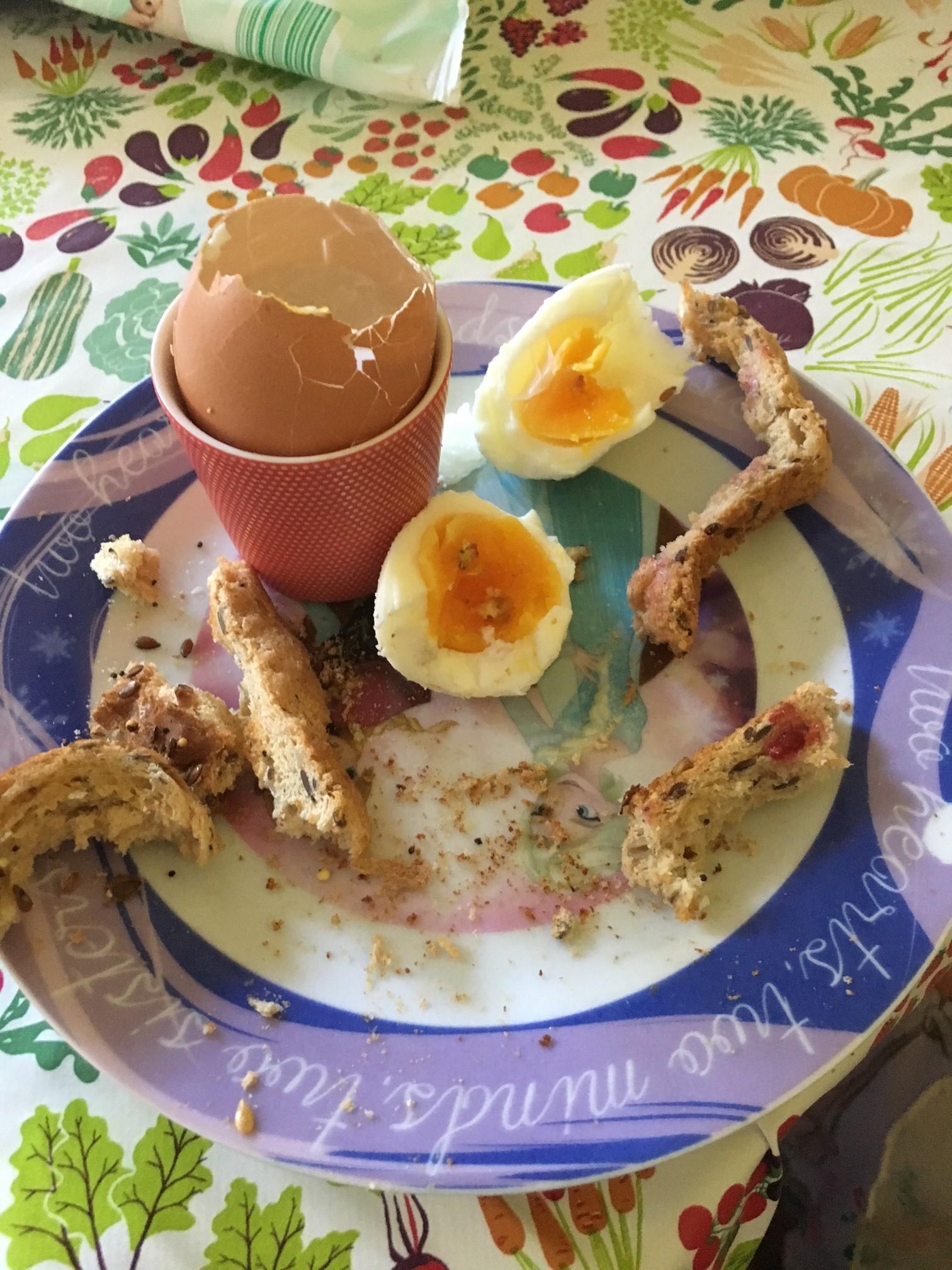 I wondered if I was the only loon and if others were the same or a lot more liberal.

This is what I found out when I asked my fellow bloggers.

“Our little boy is 20 months and we’re definitely going the limit route. I have asked for him not to get any but I know both sets of grandparents have bought him some little chocolate things for Sunday. He can have a couple, if that! Then I’ll ration the rest.” Nicole from The Frugal Cottage.

“I ration the chocolate out. They have a little bit of a choc fest on Easter Sunday (although I will limit it and not for breakfast!) and then the eggs gradually get eaten over several weeks, usually after dinner as their “something else” (otherwise known as pudding!)” Louise from Little Hearts Big Loves.

“Growing up we had to eat breakfast first. Other than that is was fairly a free for all for the one day, but we were still expected to eat our meals. Any left over chocolate was given in small portions over the next few days. As Piglet gets older I plan to adopt a similar sort of route. This year at 14 months he will get very little chocolate though – I’ll help him out by eat it” Kimberly from Odd Hogg.

“We try and ration but inevitably she has more than usual. This year I’ve hidden a few healthy treats in plastic eggs too!” Lucy from Real Mum Reviews.

“We definitely have limits, perhaps a little more lenient on occasions like easter but it isn’t a case of scoffing their faces. I tend to hide it away during the day and break a few bits into a bowl.” Helen from All The Beautiful Things.

“We don’t really do eggs to be honest. They’ll get an egg each and then will have a little piece each day for dessert in the evening. Certainly nothing crazy and it’s more likely to be found forgotten in a cupboard eventually! Last year we did a wee hunt with different gifts in plastic eggs – just small plastic party bag stuff!” Laura from Edinburgh Life with Kids.

“My son has one egg and he can eat it when he wants but that’s it!” Jen from Just Average Jen.

“We will do a hunt with small eggs / treats then they will be able to have one or two but once excitement has died down I will whip them away for our general sweetie box to spread things out. Hunt also has non-food stuff too.” Sian from The Mama Story.

“My children got lots of eggs last year and it was a nightmare stopping them from eating the chocolate all at once. This year, they have bought each other a chocolate egg and everyone else is giving them money.” Bek from Dilly Drops.

“My kids can tuck in after each meal but they still have to have proper meals too! Me? I eat it from the moment I get up til the moment I go to bed, usually hiding in a cupboard!” Laura from Five Little Doves.

“I think it’s definitely breakfast first although this year we have only brought them one egg each and restricted what family give. We will probably do a Easter egg hunt but with limitations on eggs.” Nigel from DIY Daddy.

“I operate on a ‘when it’s gone it’s gone policy’ – they’re going to eat it all anyway, whether that’s all in one day or over five days! So I let them have it before breakfast, for breakfast and after breakfast! Interestingly by not setting a limit they often say they’ve had enough and don’t want anymore…”  Natalie from Crummy Mummy.

“Ooo no! I hate my girls eating too much chocolate on the best of days. Easter Sunday, they’ll have breakfast as normal. Sure, we’ll do an egg hunt, but chocolate will be rationed and spread out over the course of a week.” Emily from Twin Mummy and Daddy.

“As the little man isn’t allowed chocolate, most of our gifts this year will be little non-edible gifts. A little nibble might be allowed before breakfast, but only a nibble.”  Victoria from Mummy Times Two.

“I’ll be honest I can be a Scrooge when it comes to chocolate. She will have some over Easter and as a treat. But most the of the time she actually refuses it now and asks for a banana or an apple instead!” Jenna from Then There Were Three.

“Our two have quite a healthy diet so at times like Easter we do ease up. That being said it’s no for Breakfast and also because we both have large families we have only bought one egg for each this year.” Richard from Two Bottles of Milk.

“We’re having a ‘healthy Easter egg hunt’ for my 19 month old. We’ve got the refillable plastic eggs and we’re stuffing them with things like raisins, cut up grapes and strawberries. I did it last week when my 2 year old nephew was over and he LOVED it!” Claire from The Happy Weaner.

“Mine will have breakfast as usual and then have half a medium egg and then lunch and then the other half of an egg for pudding. Over the past 9 years I don’t think I’ve ever let my kids have more than 2 medium sized or a large handful of smaller eggs across Easter Sunday. One of my kids still has goodies left over from Christmas so I’m never too concerned they will over eat.” Carla from Random Thoughts of a Twenty Something.

“The egg hunt happens as soon as they wake but they only collect them! I’m such a mean mummy!! They can have a small egg after breakfast (I’m talking hollow 5cm), then negotiations start for more throughout the day with a big egg after dinner. The majority of their haul (plus any eggs from anyone else) go in the ‘treat cupboard’ to be dished out after dinner at weekends. As mine are 5, 8 & 11 now, they are quite happy with this and actually wouldn’t stuff it all at once anyway. They rarely eat a whole large egg in one go. I think if you are generally strict with their sugar intake and make sure they understand why, it pays off in the long term!” Sonia from Buzy Mum.

“We have breakfast first (still too young to know any different!) and then I let her have 1 egg during the day at her own pace

🙂 The rest of the family have brought Easter books / toys etc. to limit the chocolate.” Lauren from Sophie’s Nursery.

I was reassured that I was not the only one who restricts it. I was also cool to see so many children getting other tokens rather than chocolate. The gremlin had one egg and her lolly; the rest of her bits included a holiday dress and a book.

What about you? Is Easter a chocolate fest for you?