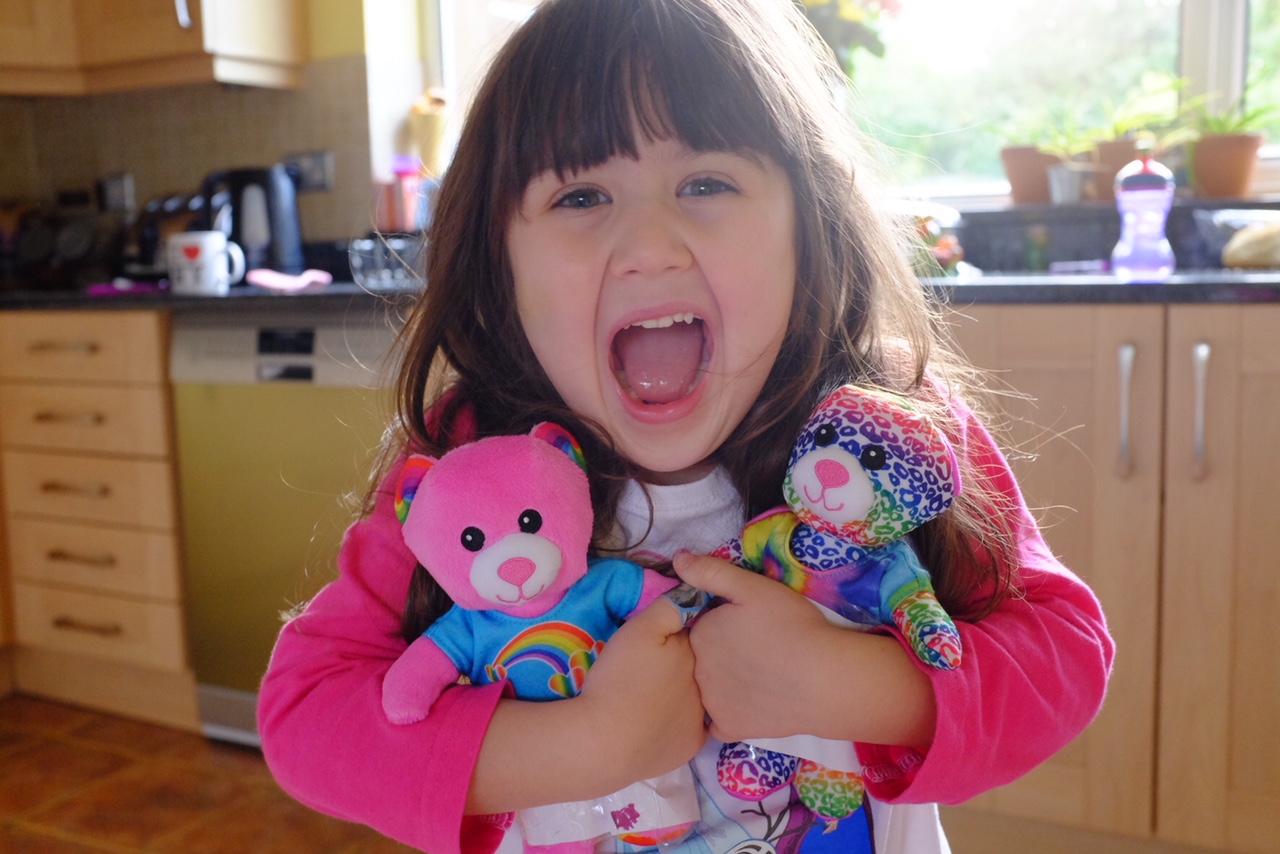 AD – Hands in the air if your kid is obsessed with Build-A-Bear? I am waving mine frantically as I type this. Every time we head into town the gremlin wants to have a “browse”. This equates to her looking at everything and driving me potty. Her Nanny and Grandad have treated her to a couple of bears and she loves them.

I was totally intrigued when I heard about Spinmaster’s Build-A-Bear Workshop Stuffing Station. Make your own Build-A-Bears at home? Genius! I knew my gremlin would just love this. We were sent the Rainbow Edition and she was very excited to try it out! In fact, as usual her baby sister was also keen too. 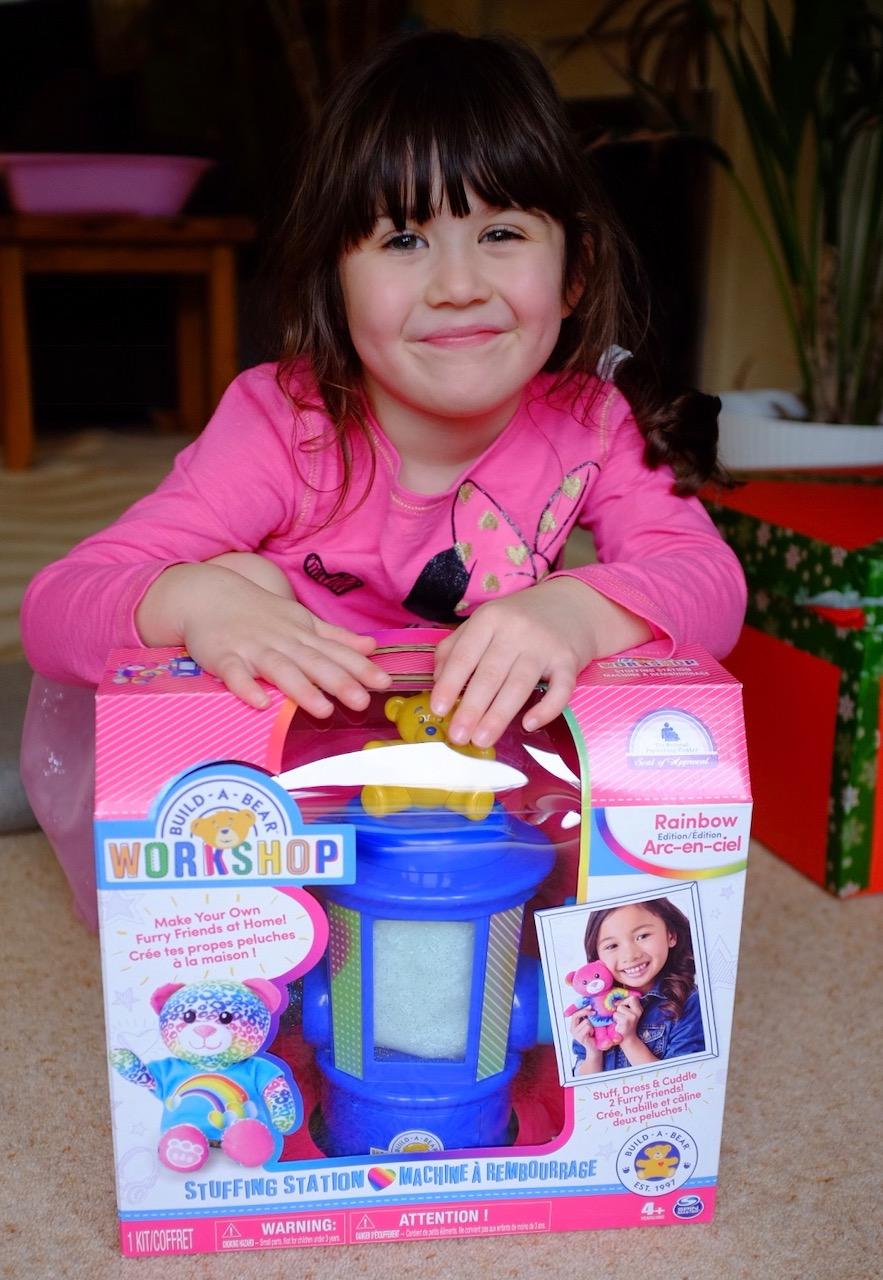 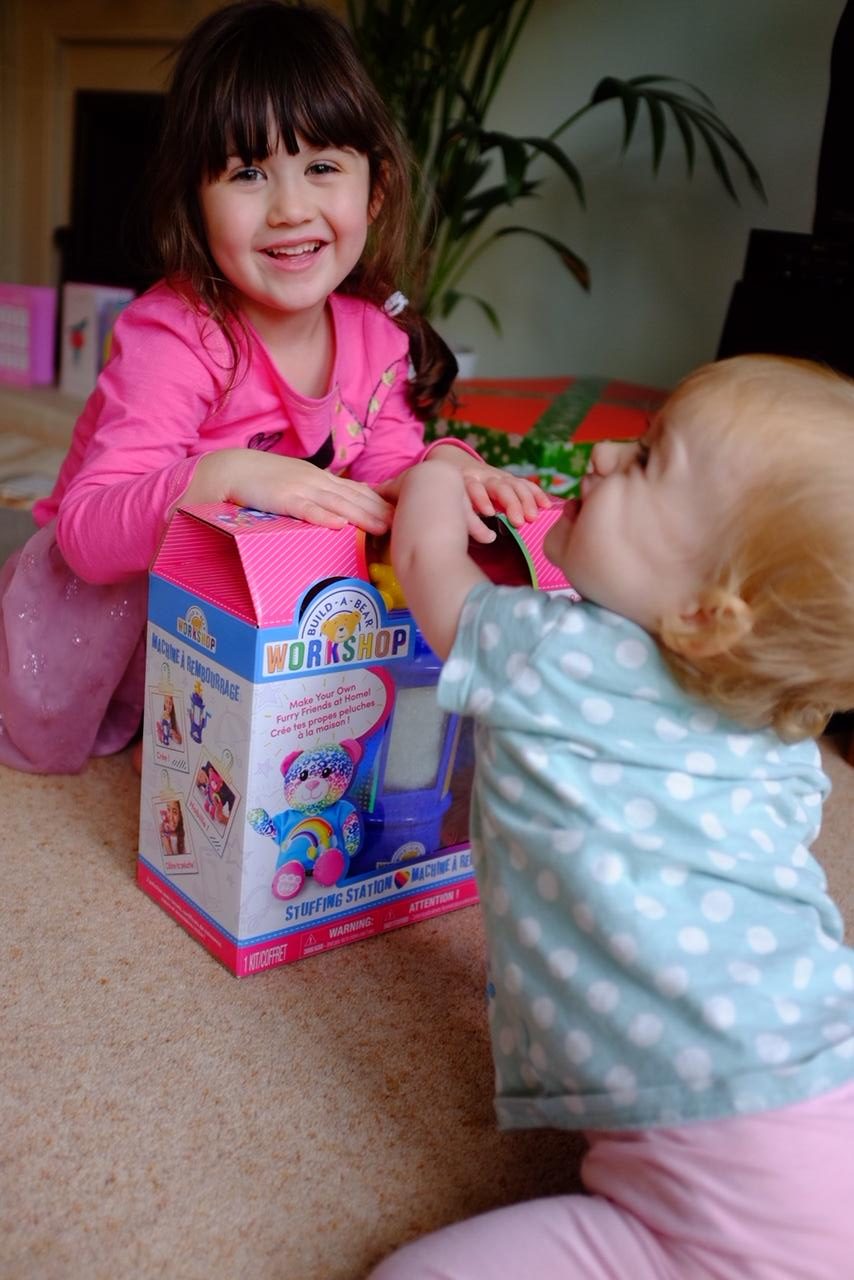 This lovely Rainbow edition of the Build-A-Bear Workshop Stuffing Station brings the magical experience of making your own bears, to your own home. You stuff and create them, dress them in their lovely Rainbow themed clothes, make a wish in their hearts and you also have certificates for each of your creations. 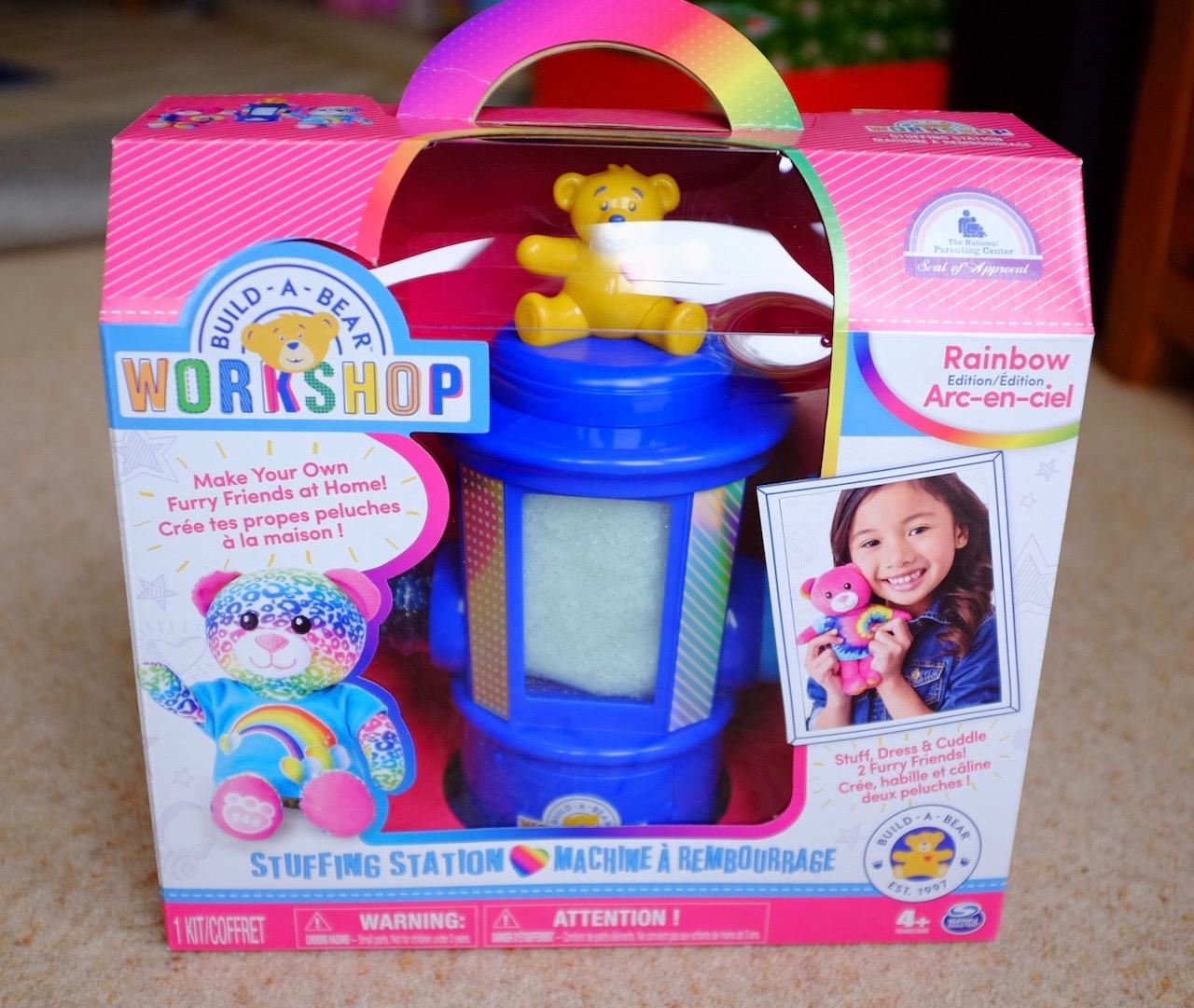 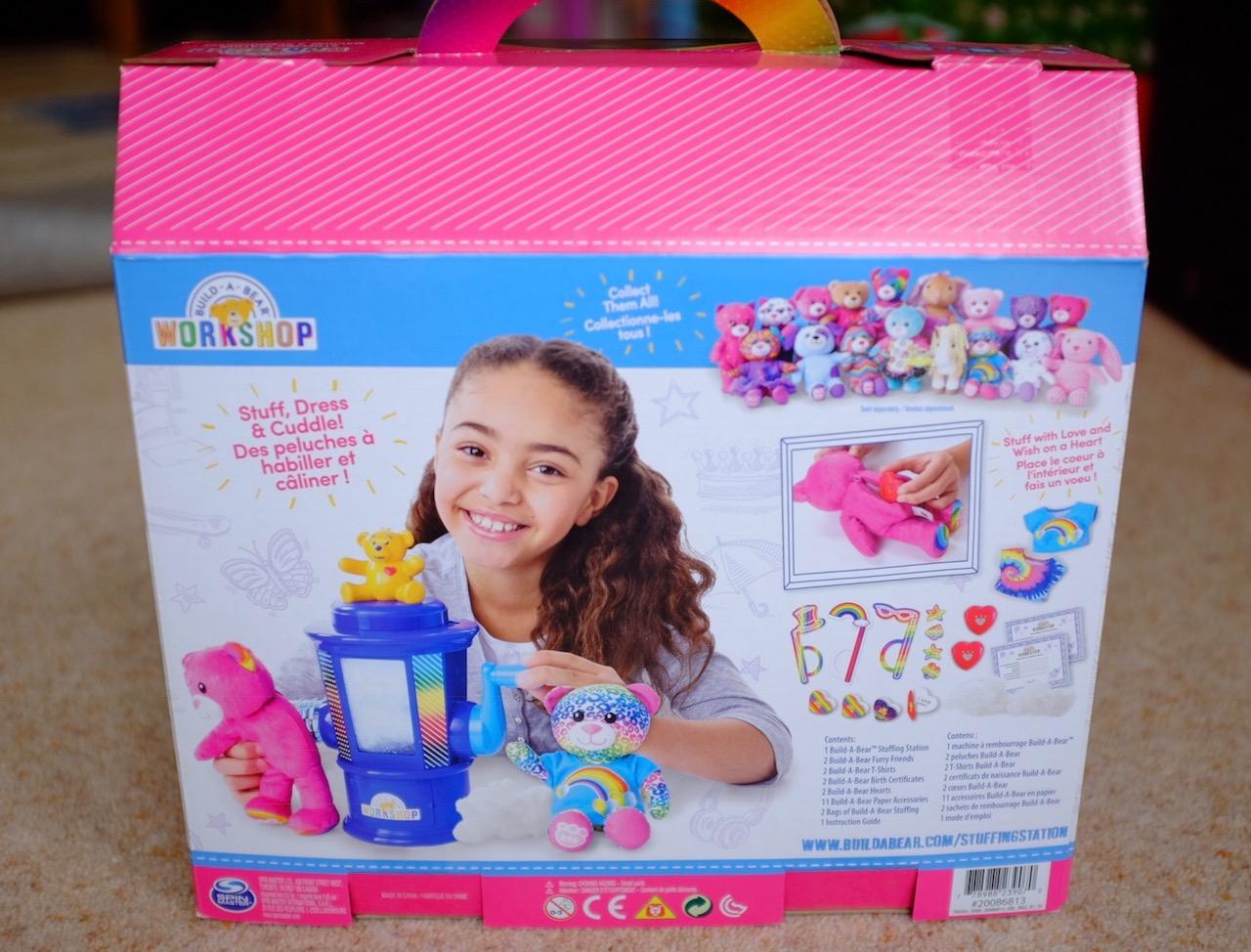 The station currently retails at around £24.99.

I managed to convince the gremlin to not open the box and wait until the weekend and I knew we would be able to get some pictures of her.

The product was easy to get into and out of the box which was a bonus immediately. There are clear instructions included.

There are two bags of stuffing included for the two small bears and you do use the full amount for each bear. We opened the bag and added it to the top of the station and secured the lid. You can see from the picture below the white stuffing ready in the station.

You then take one of the bears and fix it onto the side of the stuffing station. 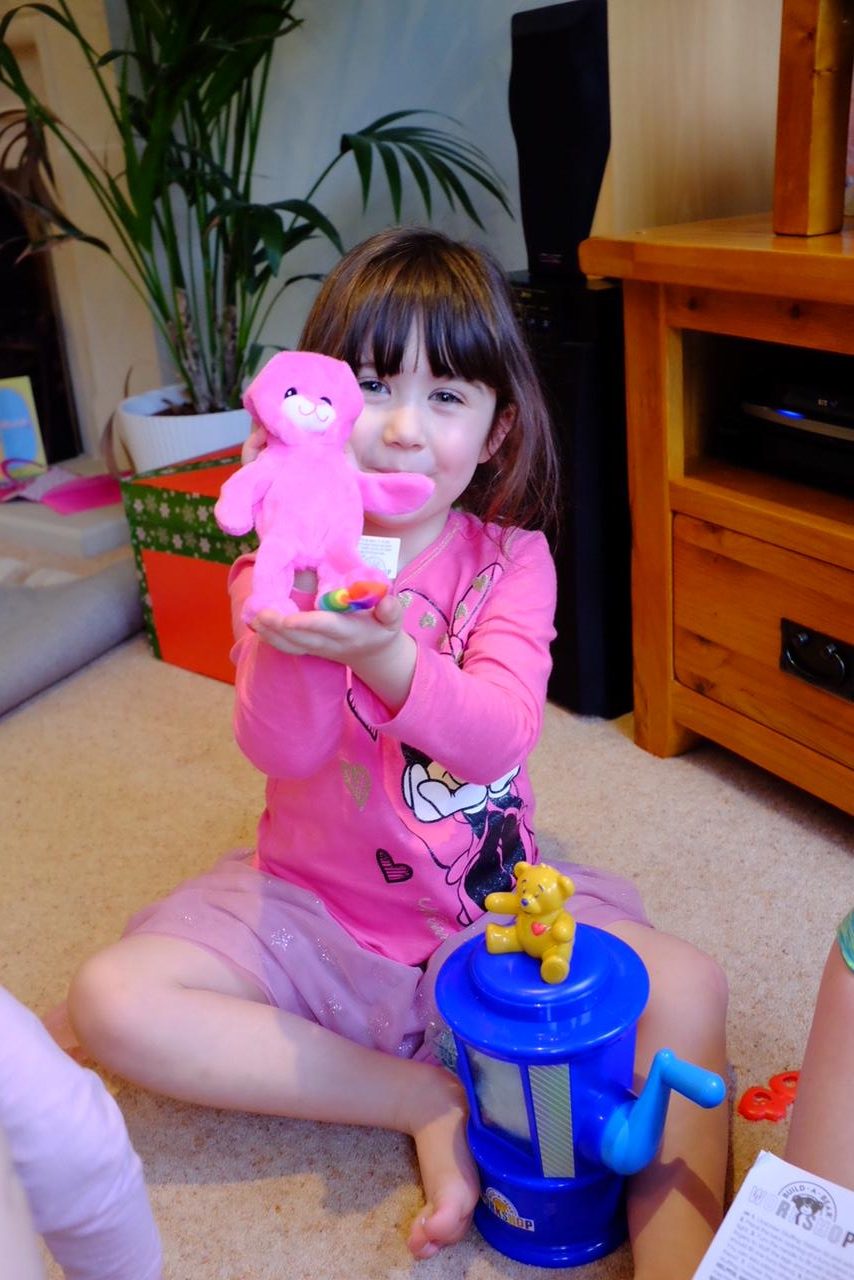 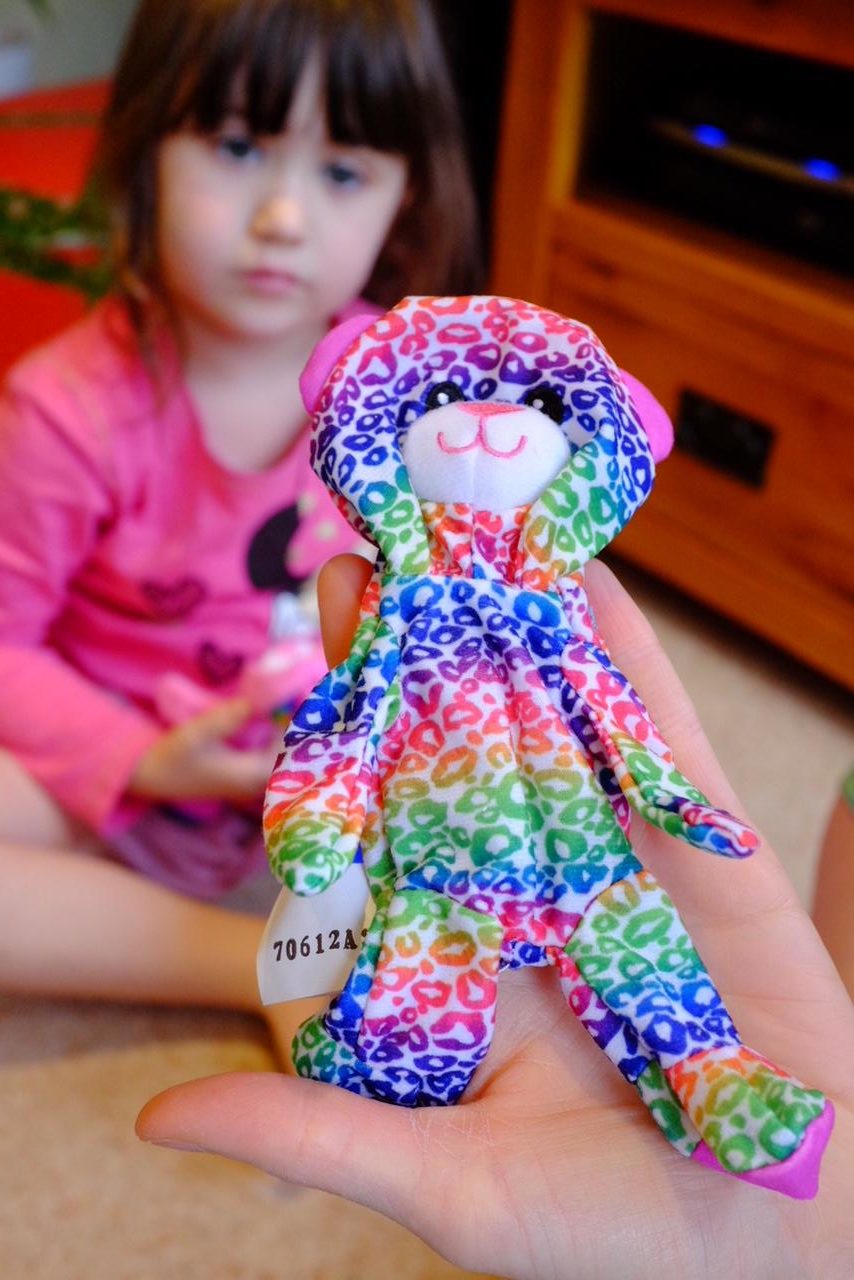 Each bear has a hole on their back to affix to the side of the station to stuff it. We did not realise until doing the second bear, that it is best to almost “screw” the bear on to the side. So affix it and turn it a few times until it is secure.

Then you are ready to get stuffing!

You then turn the lever clockwise and start to fill the bear with stuffing. You keep doing this until the bear pops off the end. You then repeat the process until all the stuffing is used and the bear is full.

It’s really important before you repeat the process to ensure you have pushed all the stuffing right to the tips of the arms, legs and head before continuing. This makes sure the bears are evenly stuffed. 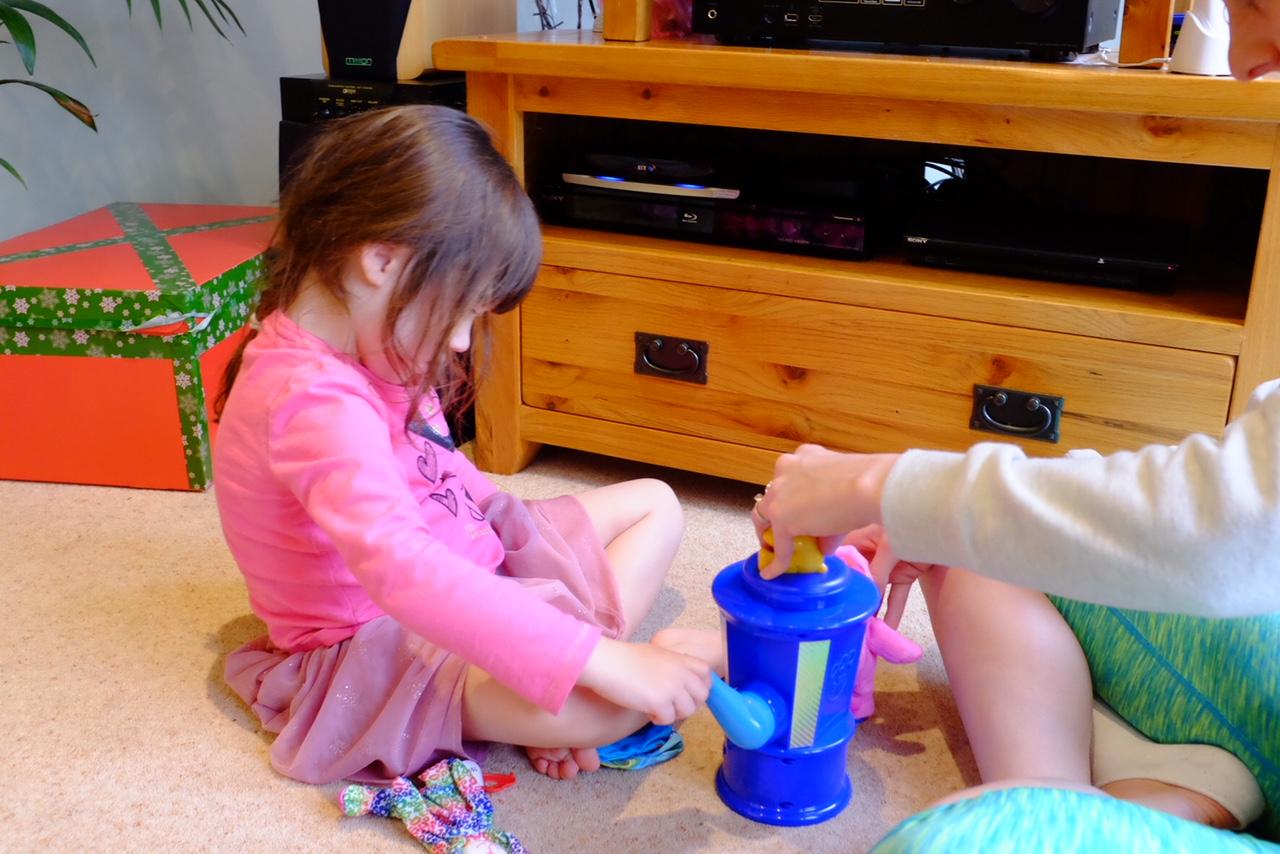 After the bear is stuffed you can then write a message or use one the cards included to fill one of the hearts to put inside your bear. Once this is done, you can zip up the completed bear, choose a T-shirt for them and you are done!

See the image below for the accessories, courtesy of Spinmaster. 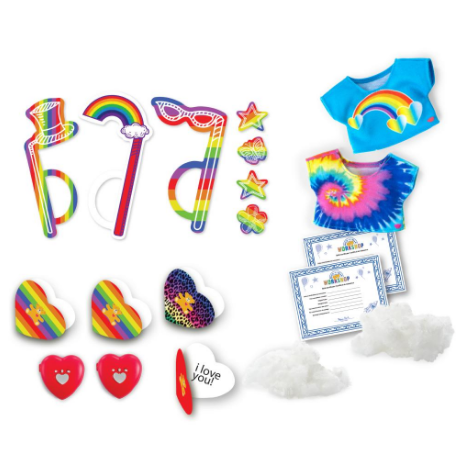 You can also complete one of the certificates to celebrate the birth of your little bears. 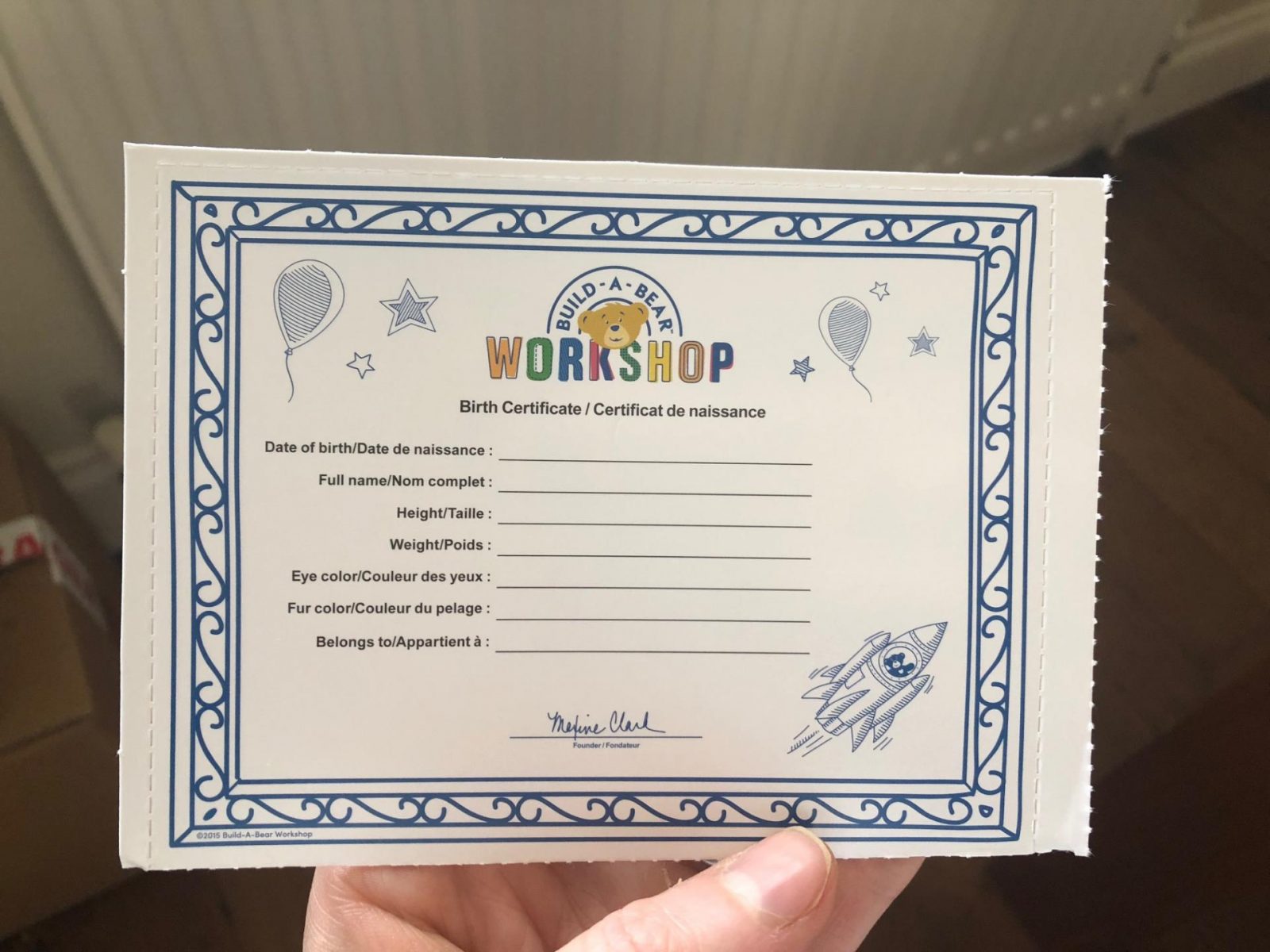 My daughter was really pleased with her two little creations!

Pros and Cons of the Product

– Brings the experience of Build-A-Bear home without the price! You won’t be conned into buying lots of extra accessories!

– Simple to do and the process follows what is described in the instructions. We did not run into any difficulties.

– My daughter could get involved and do a lot of the stuffing herself.

– Fun and two lovely bears at the end of it all.

– You do need an adult to help out. A younger child would not be able to ensure all the stuffing was pushed evenly into the limbs and head. Also it can be tricky to attach the bear to side of the station.

– Once you’ve stuffed the bears you are done really. There is the option to buy more bears and stuffing though, if your child would like to make and collect more but if not what do you really do with the station?

Overall this product went down really well. My daughter is 4 and is got involved with the creation of her bears. She turned the lever and did a lot of the stuffing. It really captured her attention and imagination. She loved dressing the bears and even made them their own skirts with her craft stuff.

If you have a child who is Build-A-Bear obsessed it really is perfect for them. I would describe the toy as more of an “experience”. It is lovely going through the process of making each bear; it’s a little creation for your child.

I would just “bear” in mind though (sorry couldn’t help myself!!), if you are not going to purchase anymore bears afterwards, the station is a little redundant afterwards but I’m sure most Build-A-Bear lovers will be after some more at some point!

It would make a lovely addition to a Christmas list!

Disclosure – we were provided with this toy in exchange for an honest review. All thoughts and opinions are our own.