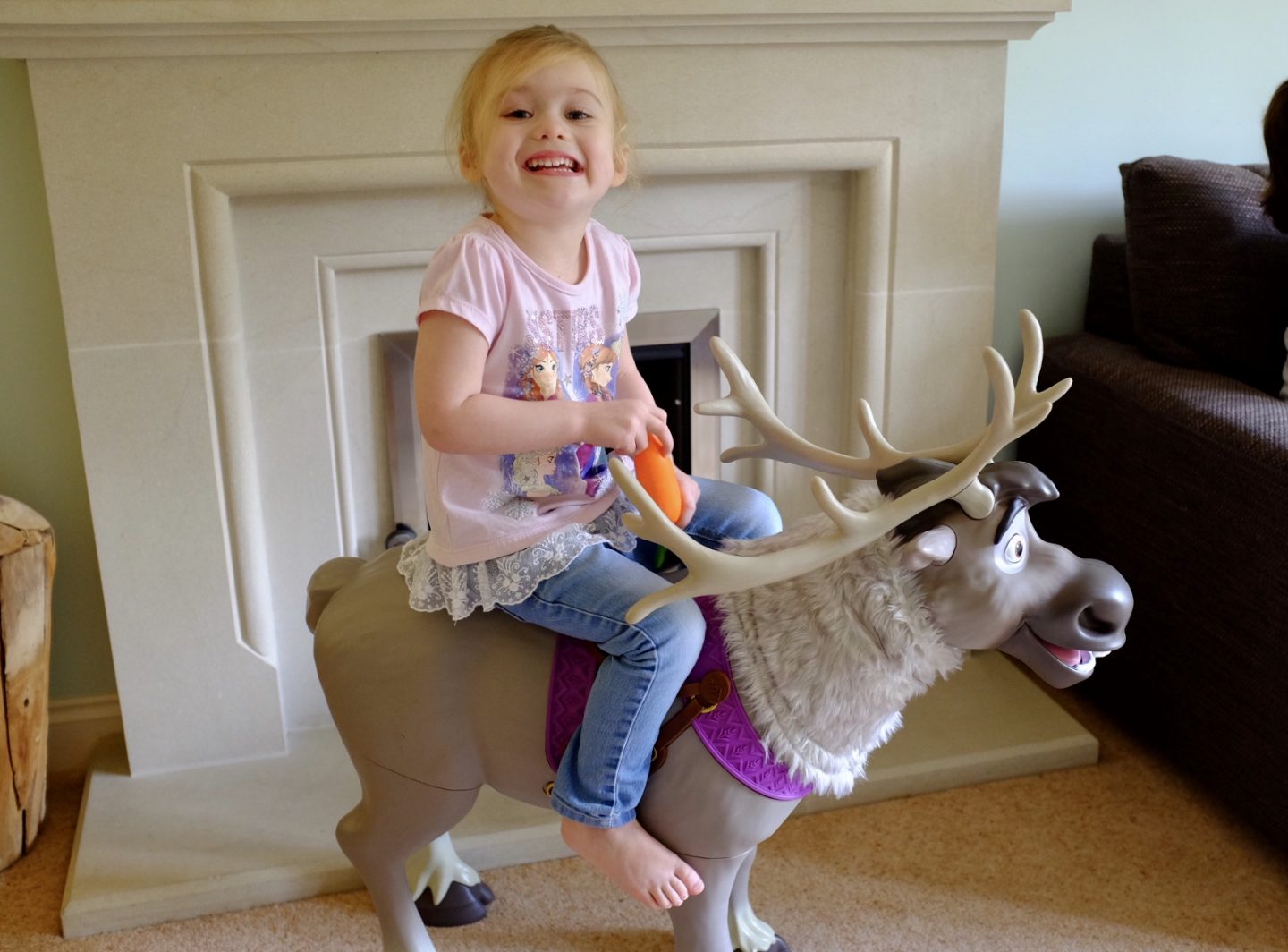 One of the best things about blogging is testing out new toys for children. Especially leading up to the Christmas period. Another aspect is getting completely surprised. Jaw dropping surprised and this was how my family were when a Playdate Sven Ride on Toy, from Disney’s Frozen 2 was delivered to our house one Friday afternoon. I’ll of course go into this in the review but it was the sheer size of it! Imagine opening a large box to find a very large reindeer staring up at you!! There were lot of laughs and giggles and the girls were so excited when they came home from nursery and school. 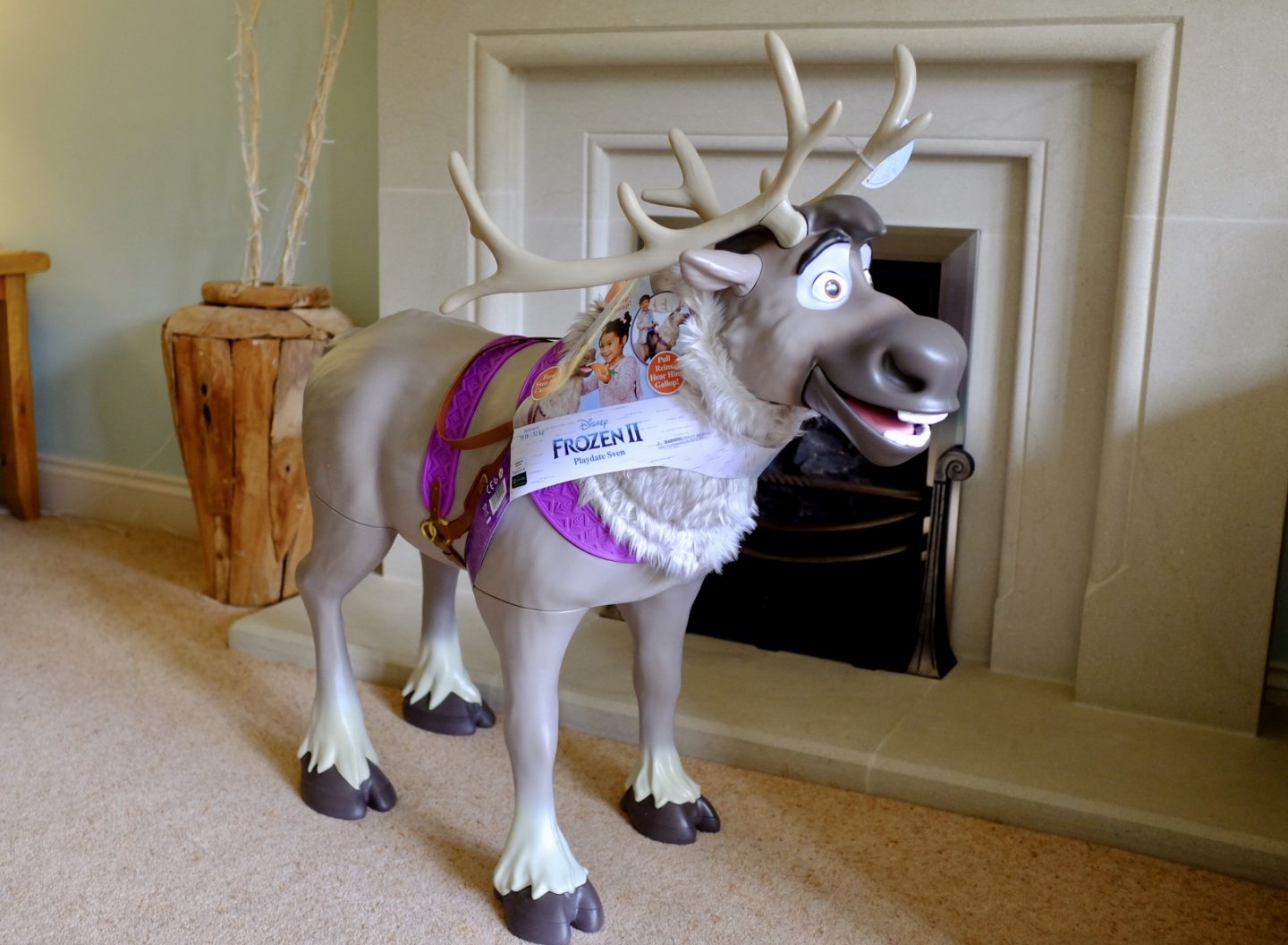 You would have to be in a complete bubble to not be aware of the imminent release of Frozen 2. It is more than likely one of the most anticipated films of the year and we have already been getting Frozen 2 ready! We have recently reviewed the new Elsa Singing Doll who sings the from the film soundtrack, “Into The Unknown”, which I’m sure we will all be singing very soon! My eldest is a huge Frozen fan and we have had many singing sessions, me filming her throw her plastic crown across the room in Elsa style and lots of movie afternoons watching the first Frozen film. I’m really hoping my middle little girl will get excited too, as will be her first trip to the cinema when we go and see Frozen 2.

More About the Playdate Sven Ride On Toy

As I said, when our Playdate Sven Ride on Toy appeared, our jaws dropped to the floor to have acquired a very large reindeer toy, that the girls can sit on! Playdate Sven and 1 Carrot is included, alongside batteries! Always a plus in my book, as you can just get playing. 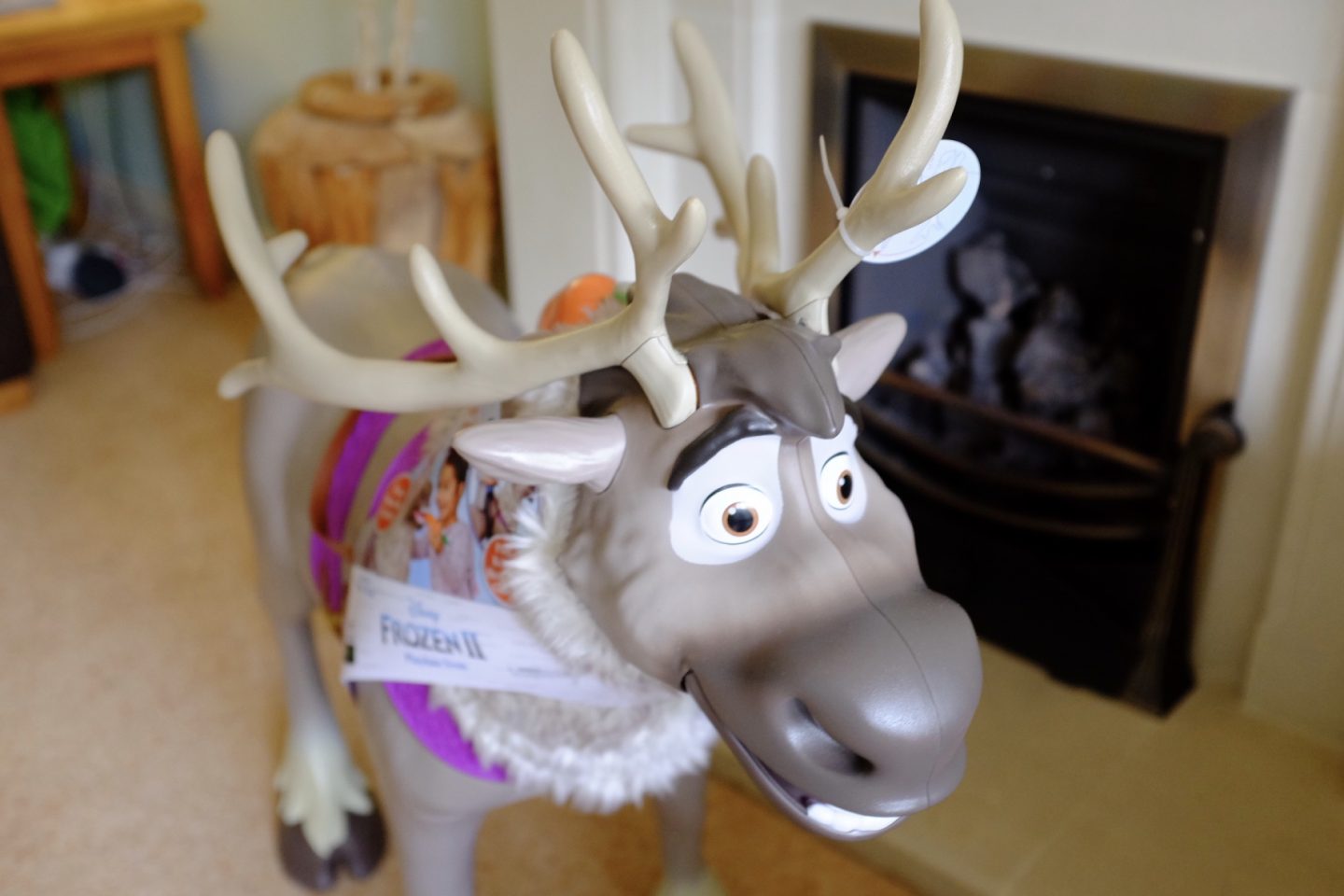 Playdate Sven is currently available in Smyth’s Toys and retails at £99.99 and is aimed at children aged 3-7 years.

He stands at over 3 feet tall and will support a child up to 32kg, 70lb. Playdate Sven features over 20 sounds, including Kristoff’s funny “Sven” voice. He comes with a carrot and you can place this in his mouth and hear him chomping.

He has a lovely, cuddly mane which you can cuddle up to or stroke. You can also pull Playdate Sven’s reins or pat his head for galloping sounds and other reindeer noises! He is pretty cool I have to say. 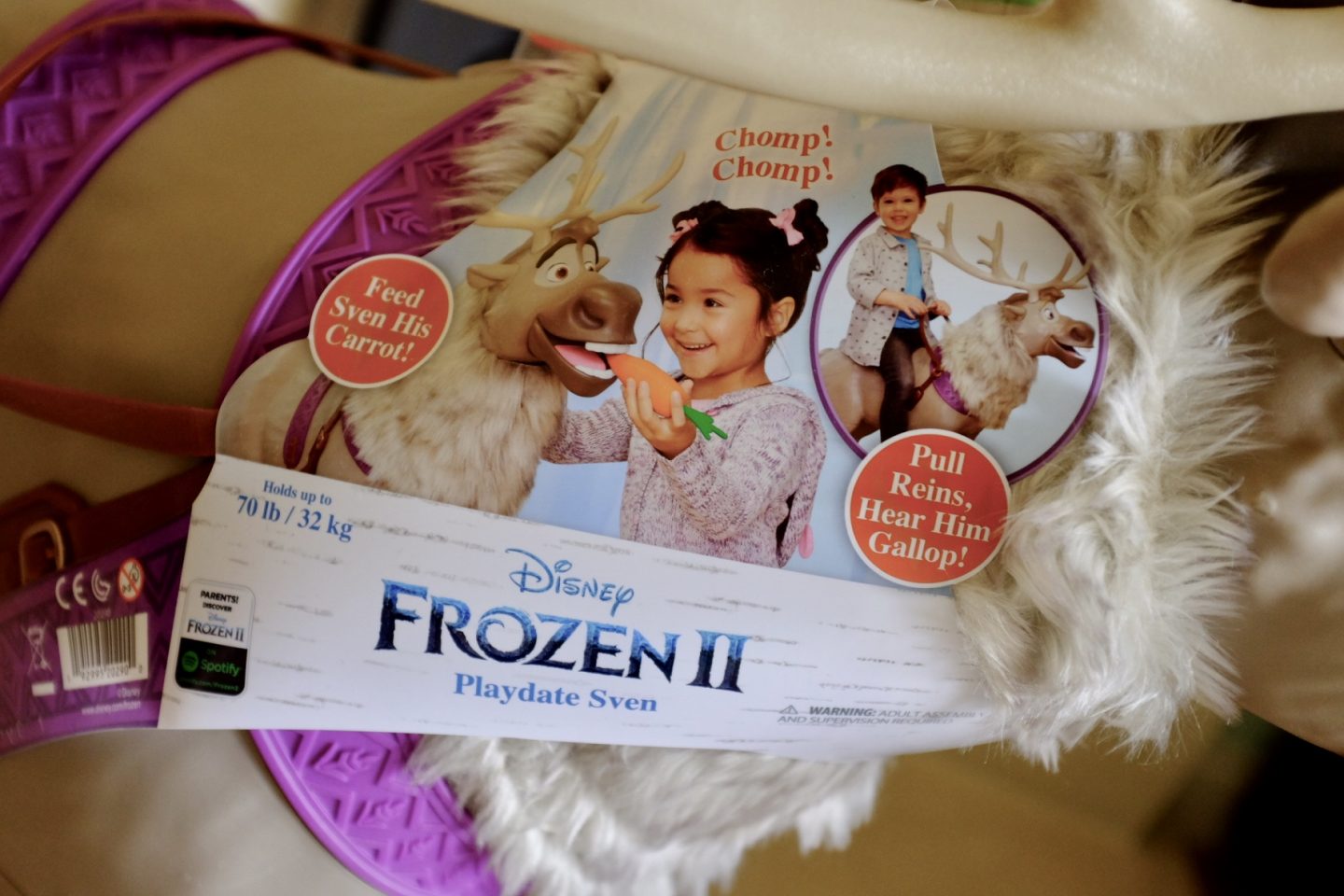 Introducing The Family to Our New Reindeer

You switch Sven on to “on mode” on the switch on his belly, which is easy and we had no problems. I realised when the kid’s had a play we hadn’t clicked up the ears in place but you can see below, we did and had no issues. 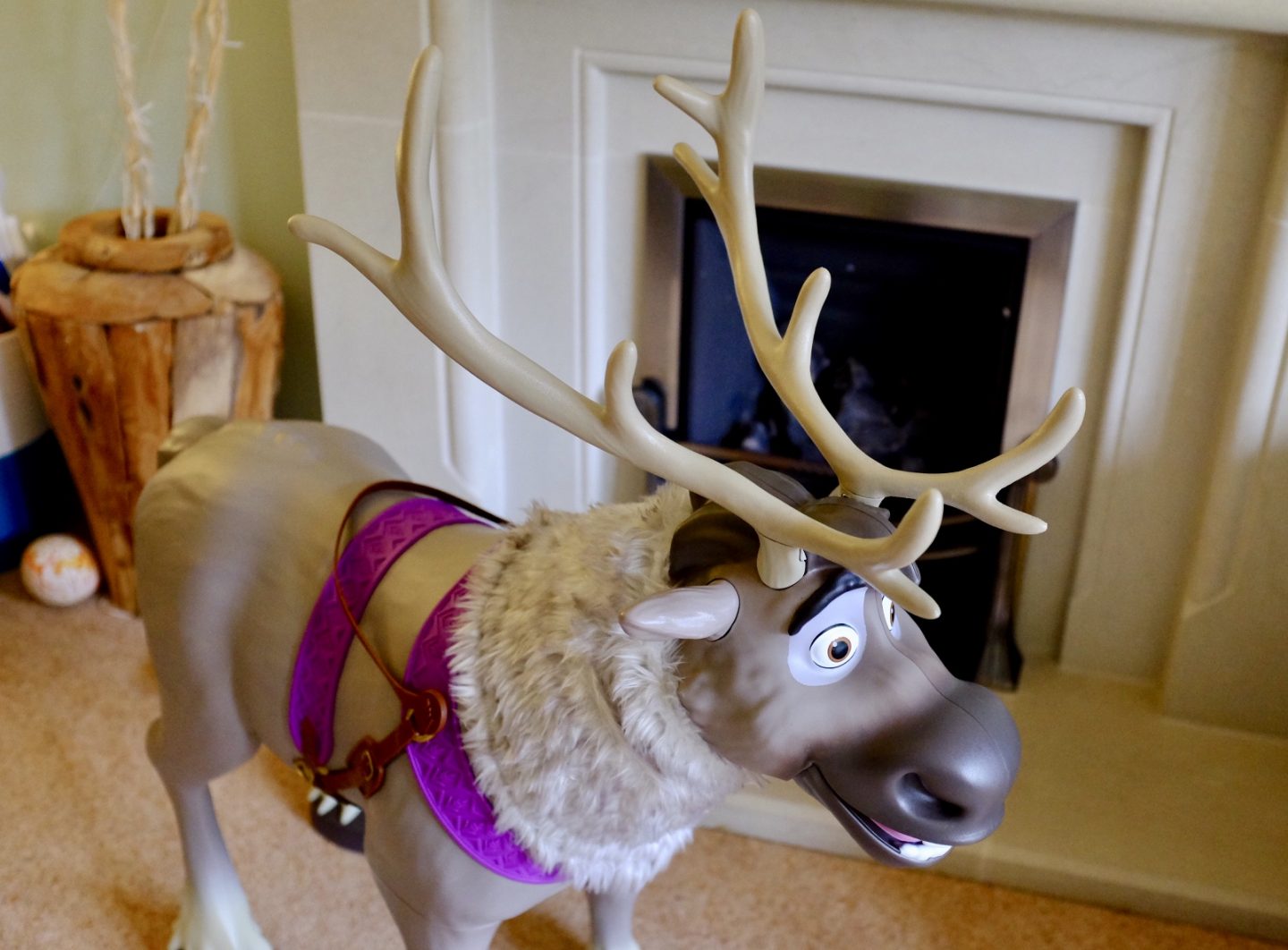 All the kids loved Playdate Sven and there was a little fighting over who was going to feed him his carrot!! The girls enjoyed pretending to ride him and pulling on his reins. His phrases are very cute and remind you of the film. My little girl below cannot say Sven at all, so we have some funny ways like “Fen” when she has asked to play on him. 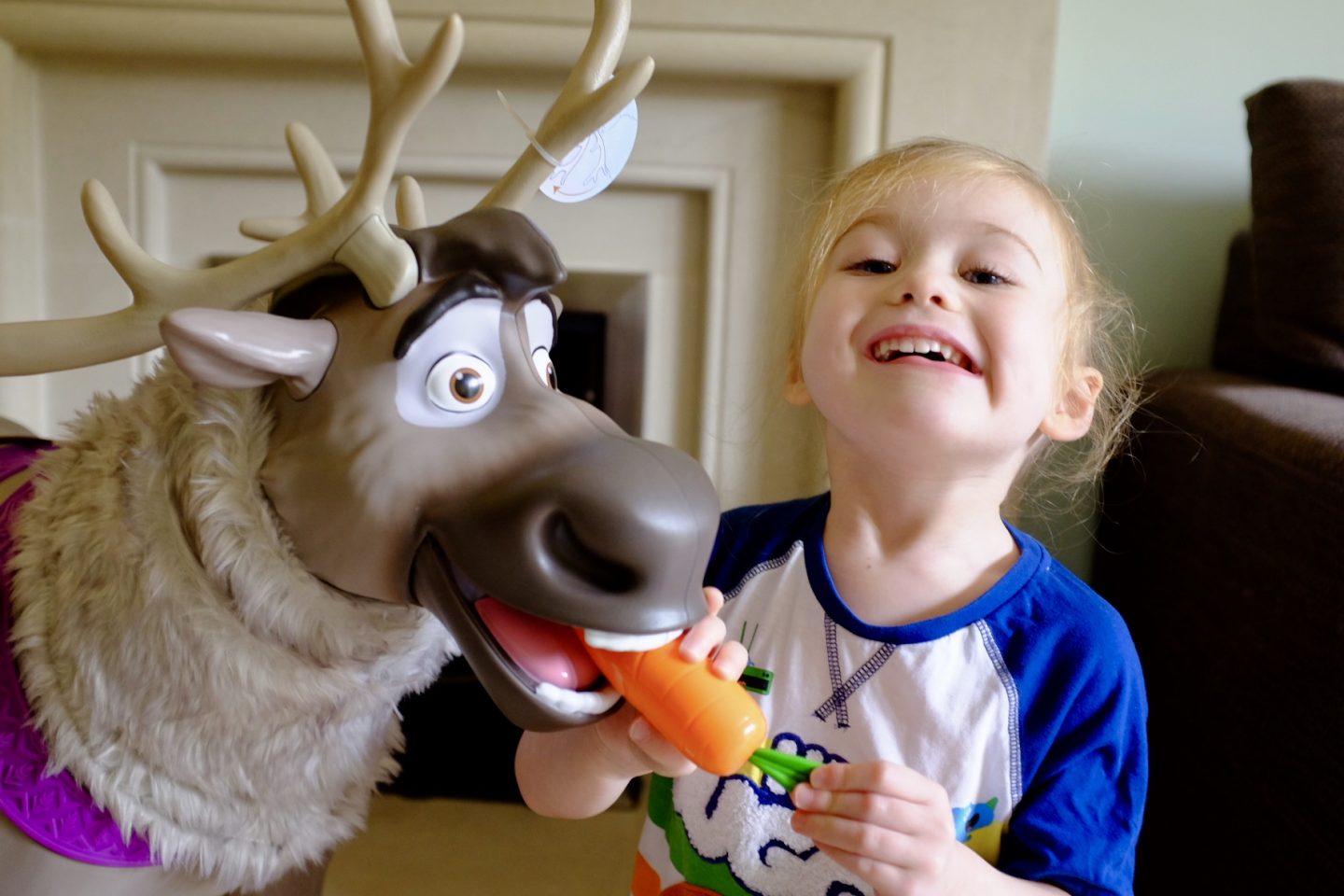 It was lovely watching my middle child in particular sit on Sven and get so excited. 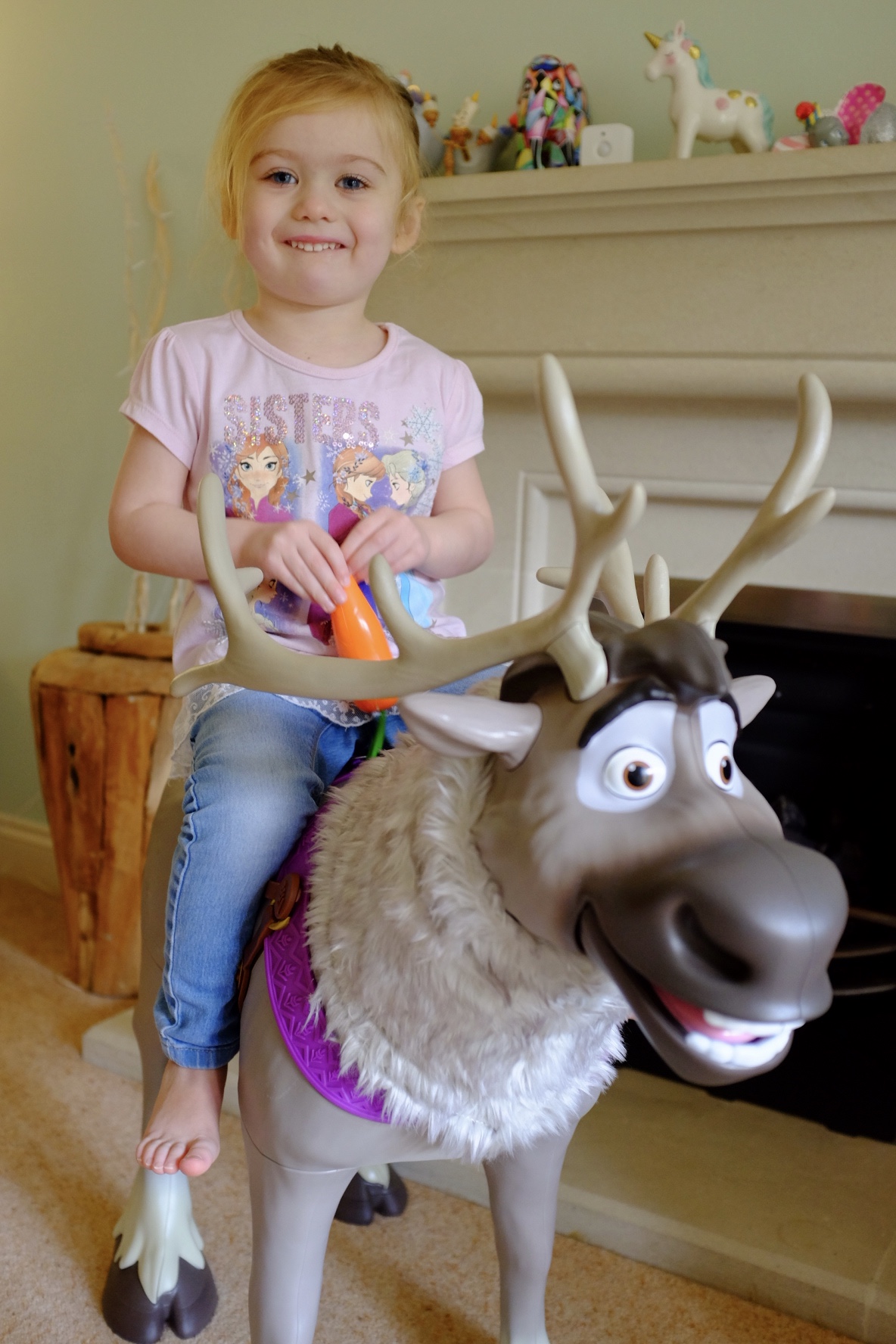 I’m always as honest as I can be in these reviews and I will be today. Playdate Sven is very cool. As I said we have all had such a giggle with him and the girls (and my 9 month old) have had fun sitting on him and feeding him his carrot. People have visited the house and of course noticed the Sven ride on toy and thought he was really fun, especially with the release of Frozen 2 so soon!

Sven makes some really funny noises and is very life-like and cute.

The instructions say only one child should sit on him and this is quite difficult if you have more than one child and you catch them playing when they shouldn’t!! Bear this in mind (although very cute) you don’t want a broken Playdate Sven! 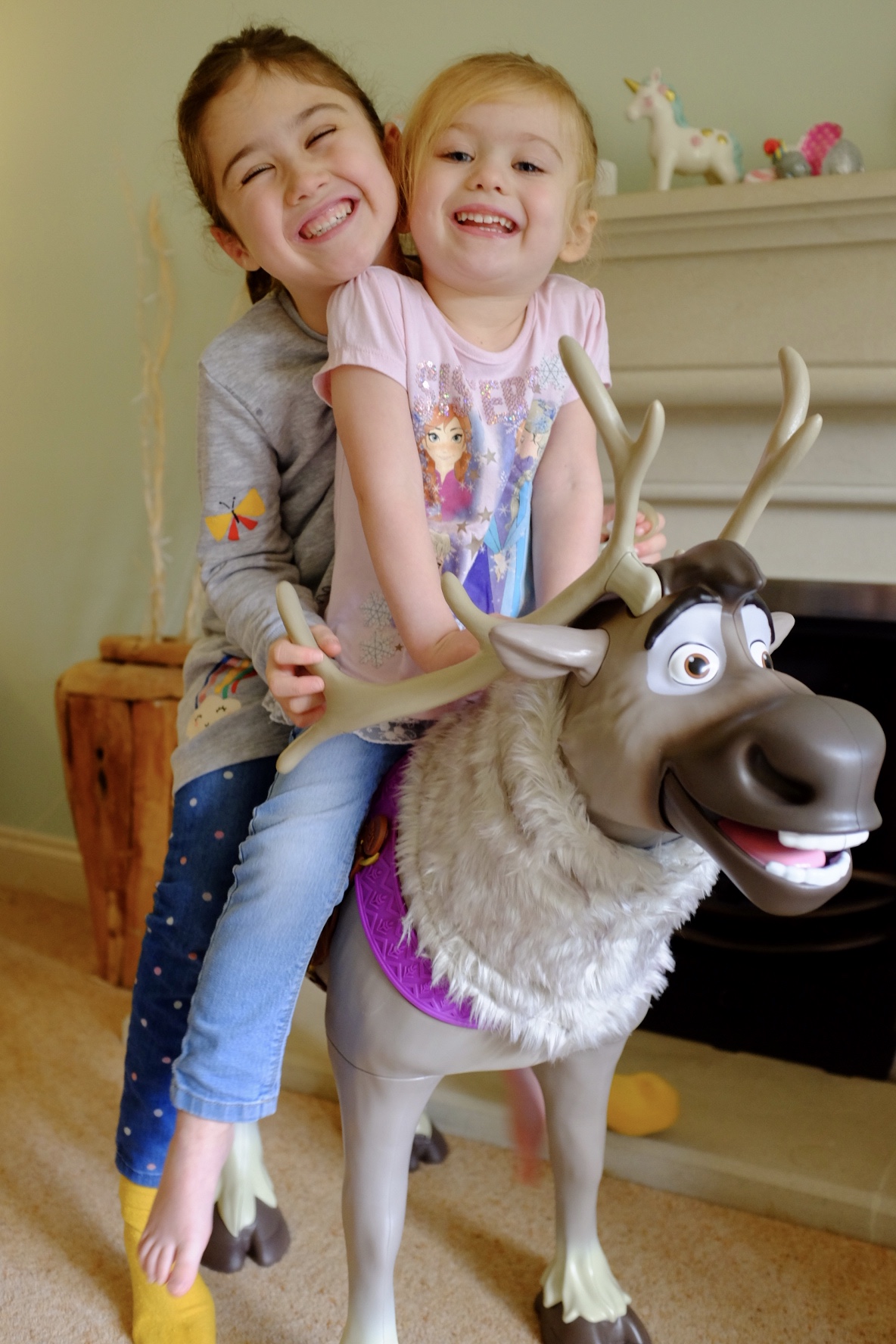 But I feel something is missing with Playdate Sven and that is the ability to move. I wish he rocked or had wheels, as ultimately he is great for imaginary games and re-creating scenes from the Frozen movies. But you can only sit on him and he is only stationary. As a child, my friend had a rocking horse and I used to spend so much time on it. I feel something that moves, gets more use. I wonder will he be played with much after a while?

The antlers are a little precarious too. You have click them up to have them higher on Playdate Sven’s head and although mine seem fine, I was very worried about the kids yanking too hard on them. In some of our pictures we hadn’t clicked them up but we had no issues doing so and they stayed in place. The instructions advise once doing this, DON’T rotate back, as can cause damage.

Price-wise he is a biggy! Almost £100 and it is a lot of plastic you paying for. This is definitely one of those toys I’d be asking my children a good hundred times if they are sure this is present they want. I can imagine it will be main present for a lot of children.

Overall I feel Playdate Sven is very fun product. He definitely has the “Wow” factor and if you know your child will really play on him and get a lot of use from him, he would make a fabulous gift. I’d just weigh this up and have a think, as he is a lot of money and I still feel he should move to get more out of him.

If you like this review, check out some of the other Christmas toys we have reviewed: