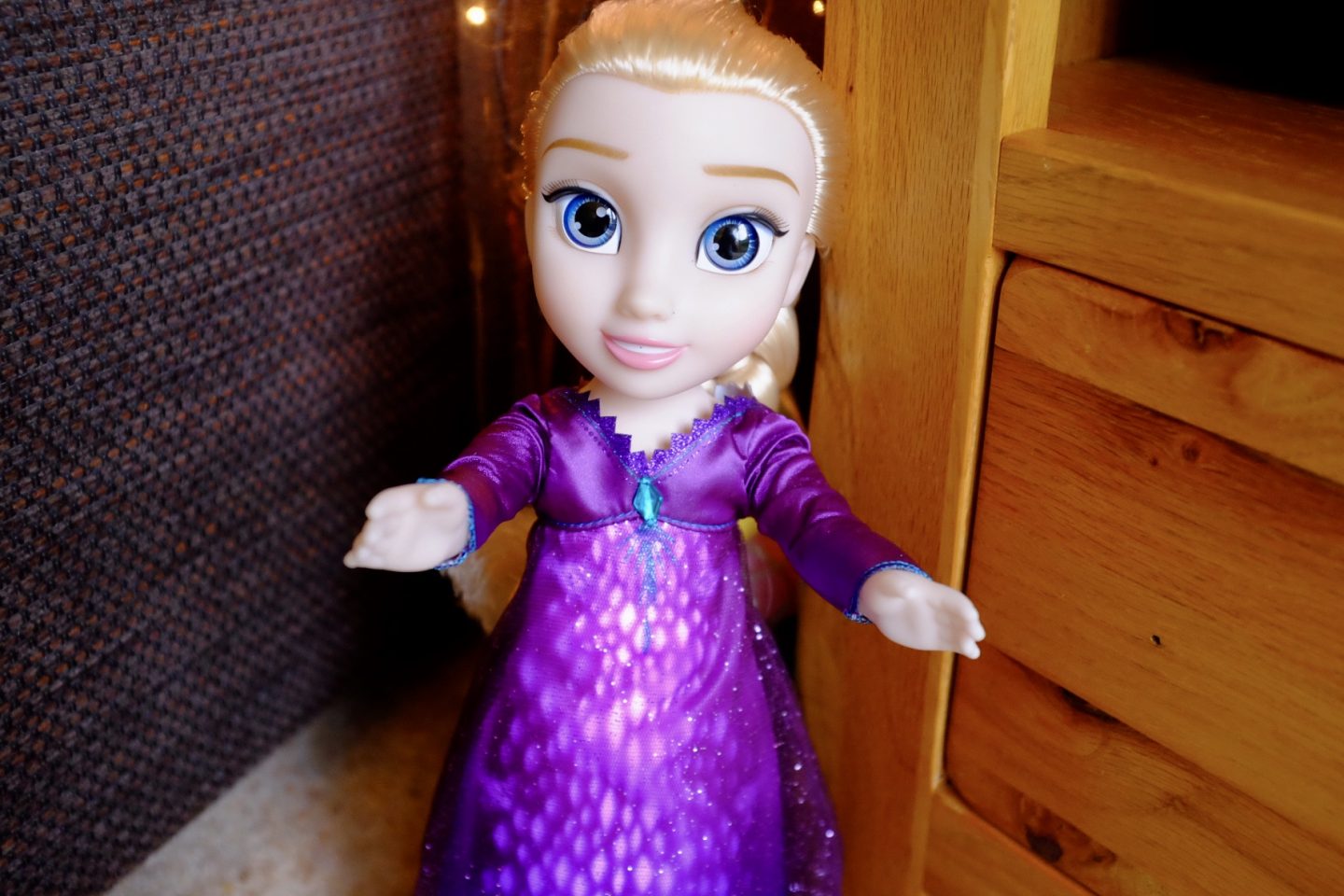 When I had the gremlin, Frozen had been out for a few years and I knew so many people were completely obsessed with  it. I was kind of hoping that she wouldn’t get obsessed with it too but come her third birthday, the magic had totally overwhelmed her. My eldest LOVED Frozen. For her third birthday party we had a Frozen party, including a Frozen bouncy castle and lots of dressing up. The Frozen soundtrack was always on and I had to admit, I was getting quite fond of it. I knew when Frozen 2 was announced, the excitement would return. This time with Little Piglet getting included too and we were kindly sent an Elsa Singing Doll to review, which really got me in the mood for the new film. The doll is also called “Into the Unknown Elsa Doll” and looks pretty impressive.

As the doll maybe a sneaky present for the girls or one of their friends,  I got the little dude to have a look at the Elsa Singing Doll with me. He is always up for getting his hands on anything that doesn’t belong to him! 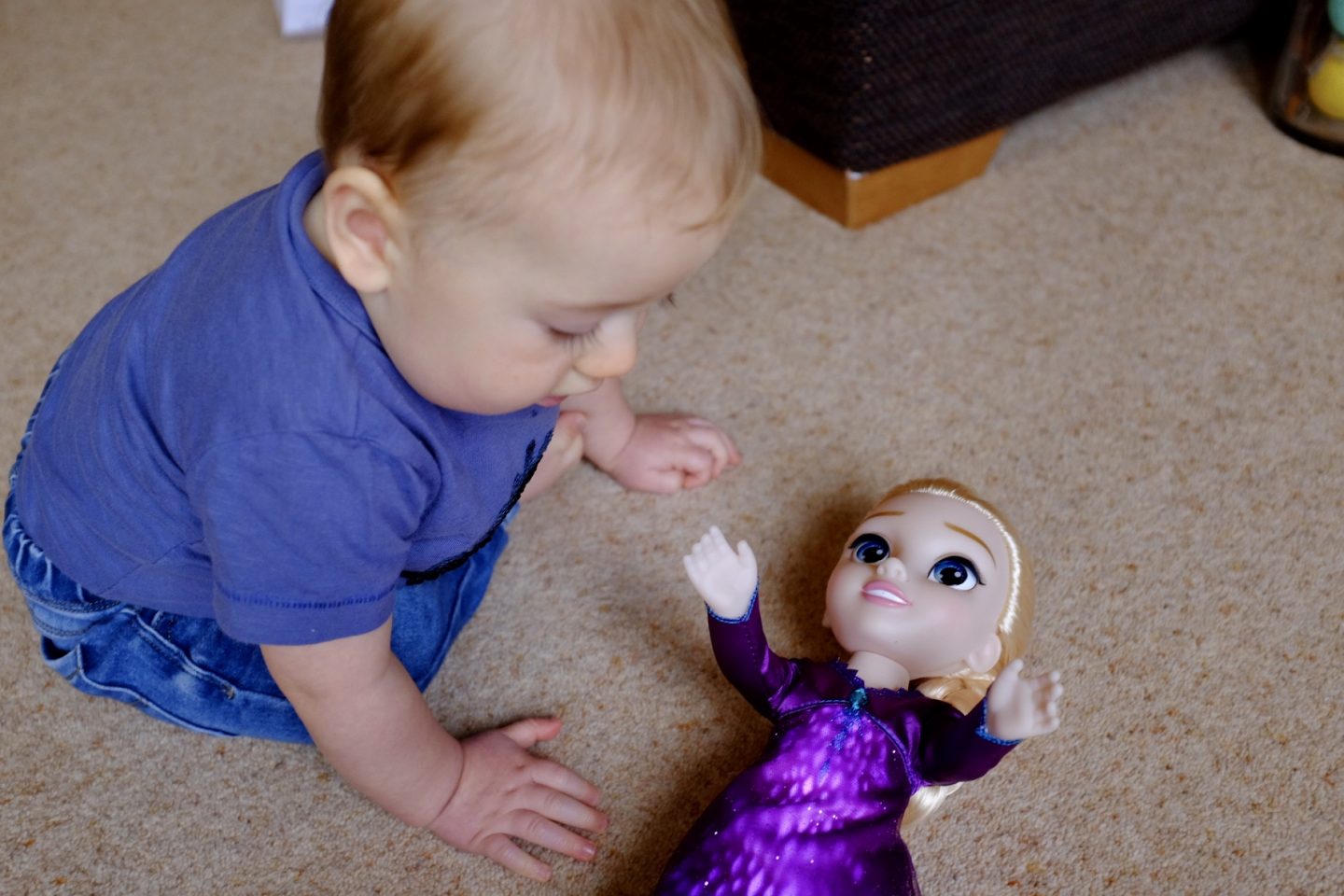 More About the Elsa Singing Doll

You get an Elsa Doll, a beautiful purple dress and a pair of shoes. The dress actually lights up when you press the heart and sings a new song and 14 film-inspired phrases. The song sounds quite dramatic, so I’m looking forward to hearing that in the film. 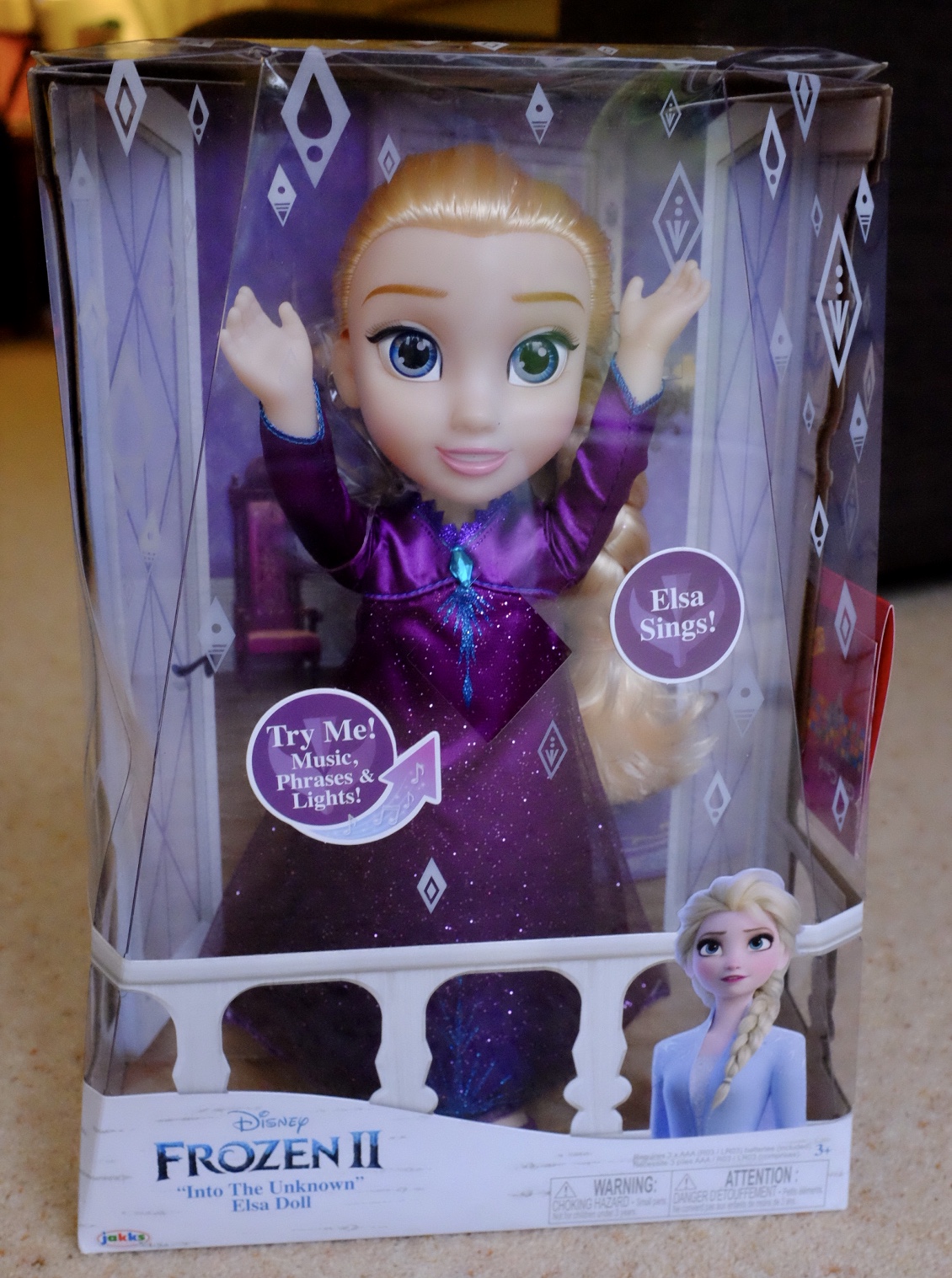 You do need 3 x AAA batteries which I am pleased to say are included and the Elsa Singing Doll is aimed at children aged 3 years and over.

There are three modes which you can change on a switch on the back of Elsa’s head. 0 = Play Mode. 1 = Try Me Mode and 2 = Song Selection Mode.

If you want to hear “Into the Unknown” as an instrumental or in a difference language, when in song selection mode, press Elsa’s crystal gem until you hear the song in your preferred language or instrumental. Switch Elsa back to play mode after.

I know there are going to be so many children dying to get hold of this doll this Christmas time, as it is the magical Elsa and it sings the song from the film. I remember being completely mad about Ariel from the Little Mermaid and I LOVED the doll I had for my birthday. If you love a film, it becomes your little world for a while. 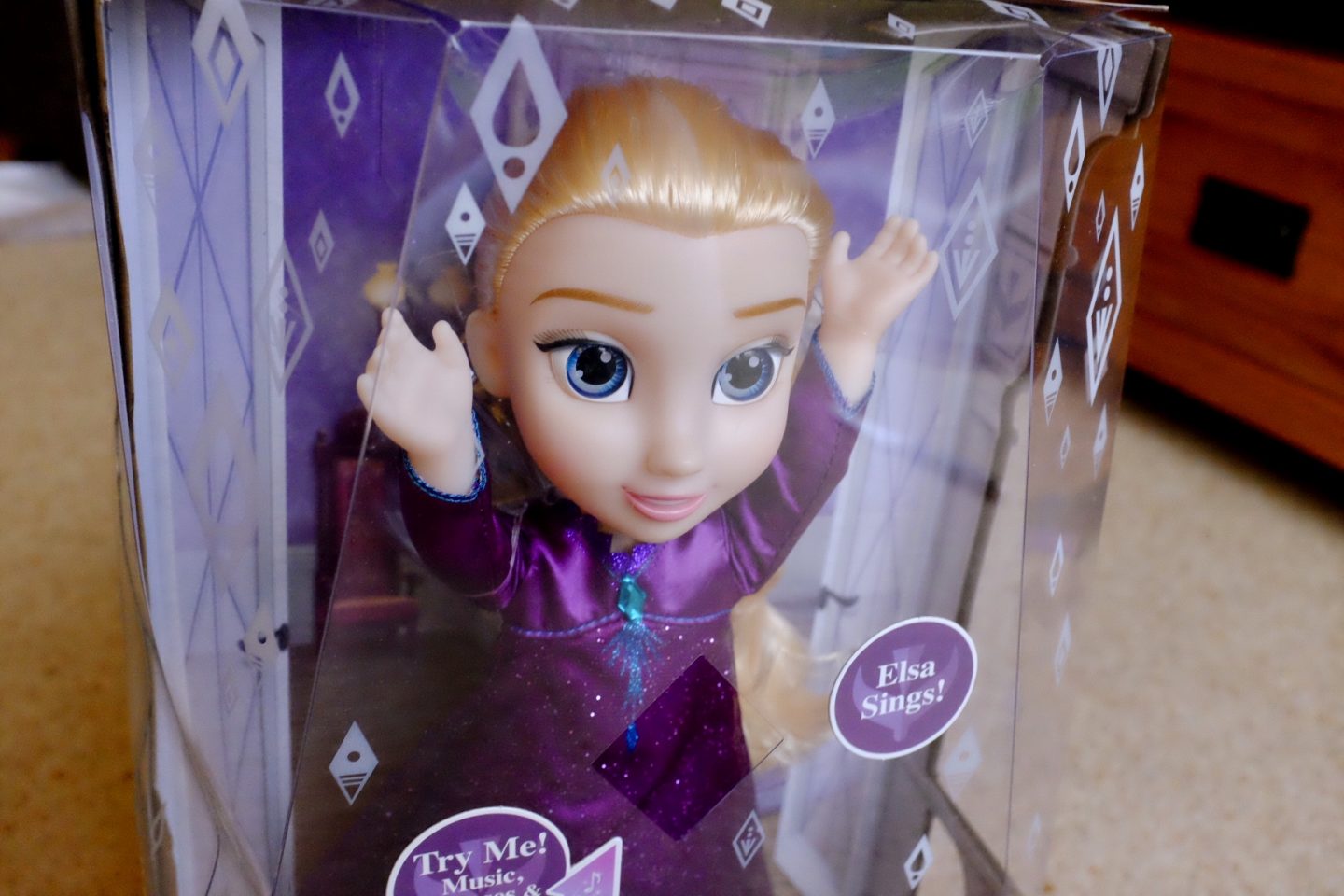 I really liked the way the dress lit up when you pressed Elsa’s heart. The pattern is lovely and it looks great in a darkened room. Elsa has big blue eyes and she is quite mesmerising to look at too. She has a lovely long, blonde plait, which if you have my daughter will be undone and out in about 30 seconds flat! 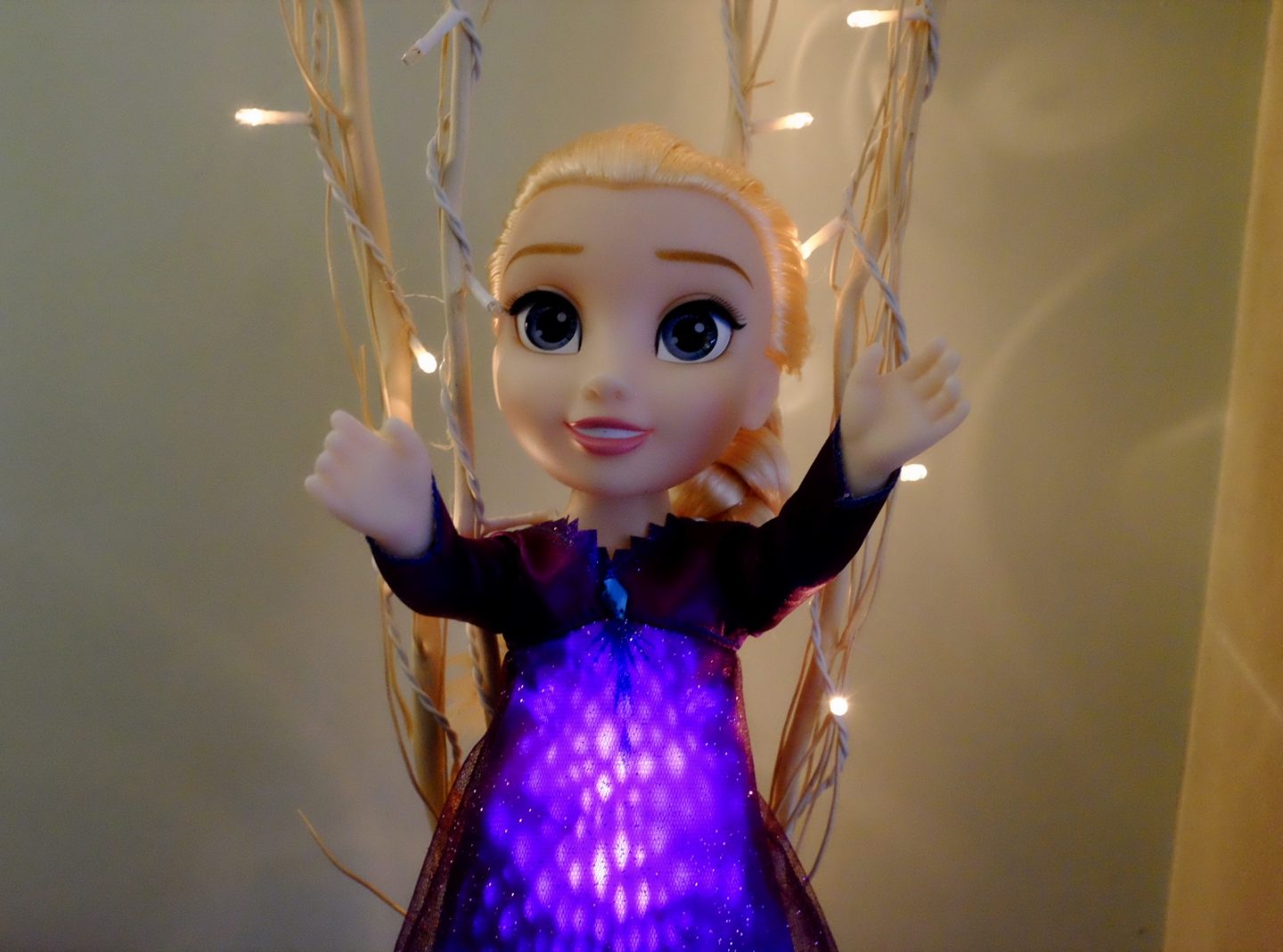 The songs and phrases are of good sound quality and sound dramatic and impressive; they definitely get you in the mood for the film, which we should be going to see after this is posted!

The only thing that perhaps is not as good is Elsa does only stand, bear this in mind. You cannot bend her legs to sit her down or anything, because of her light-up body. This does maker her quite sturdy but she is light to hold and pick up. I was glad to say quite robust around my little man. 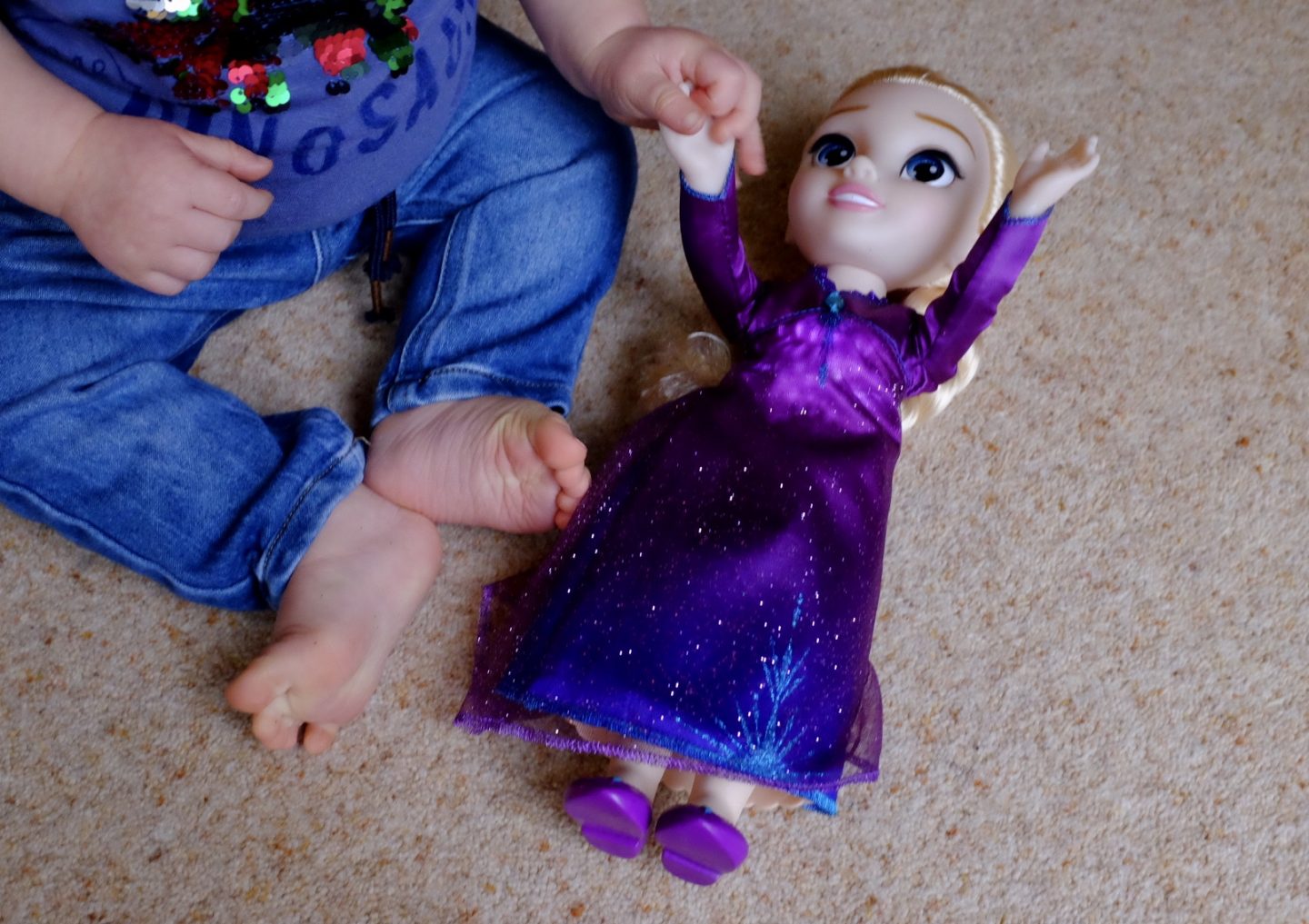 Price-wise the Elsa Singing Doll is not a cheap doll but I think with how popular she will be, I don’t see that being a problem! I reckon she will be on a lot of Christmas lists this year. 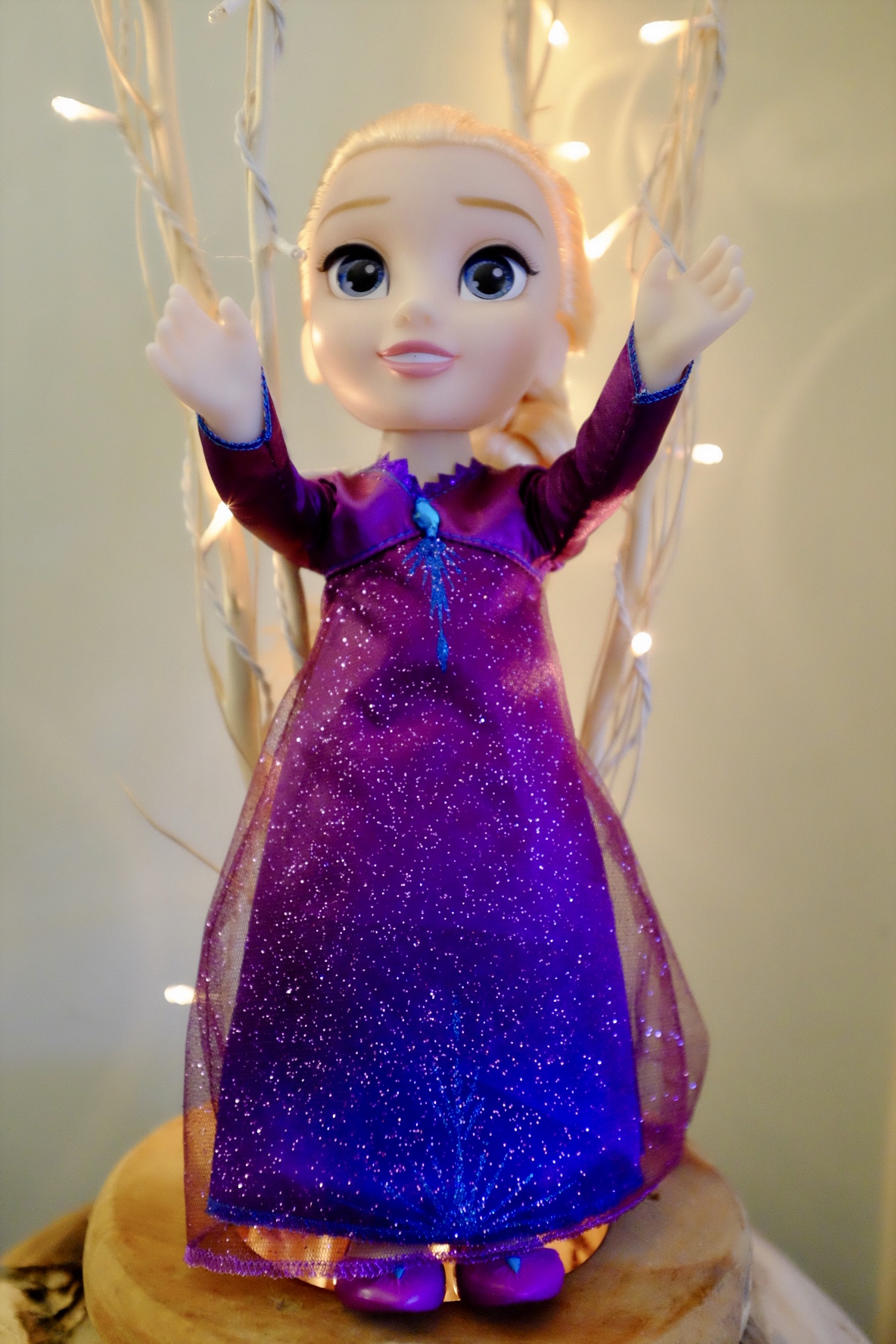 If your child is a Frozen 2 fan, the singing Elsa Doll is likely to be a bit hit. She’s perfect to re-live moments from the new film, play make-believe games and is a perfect Christmas gift!

If you like this review, check out some of the other Christmas toys we have reviewed:

Disclosure – we were sent this product in exchange for an honest review. All thoughts and opinions are our own.