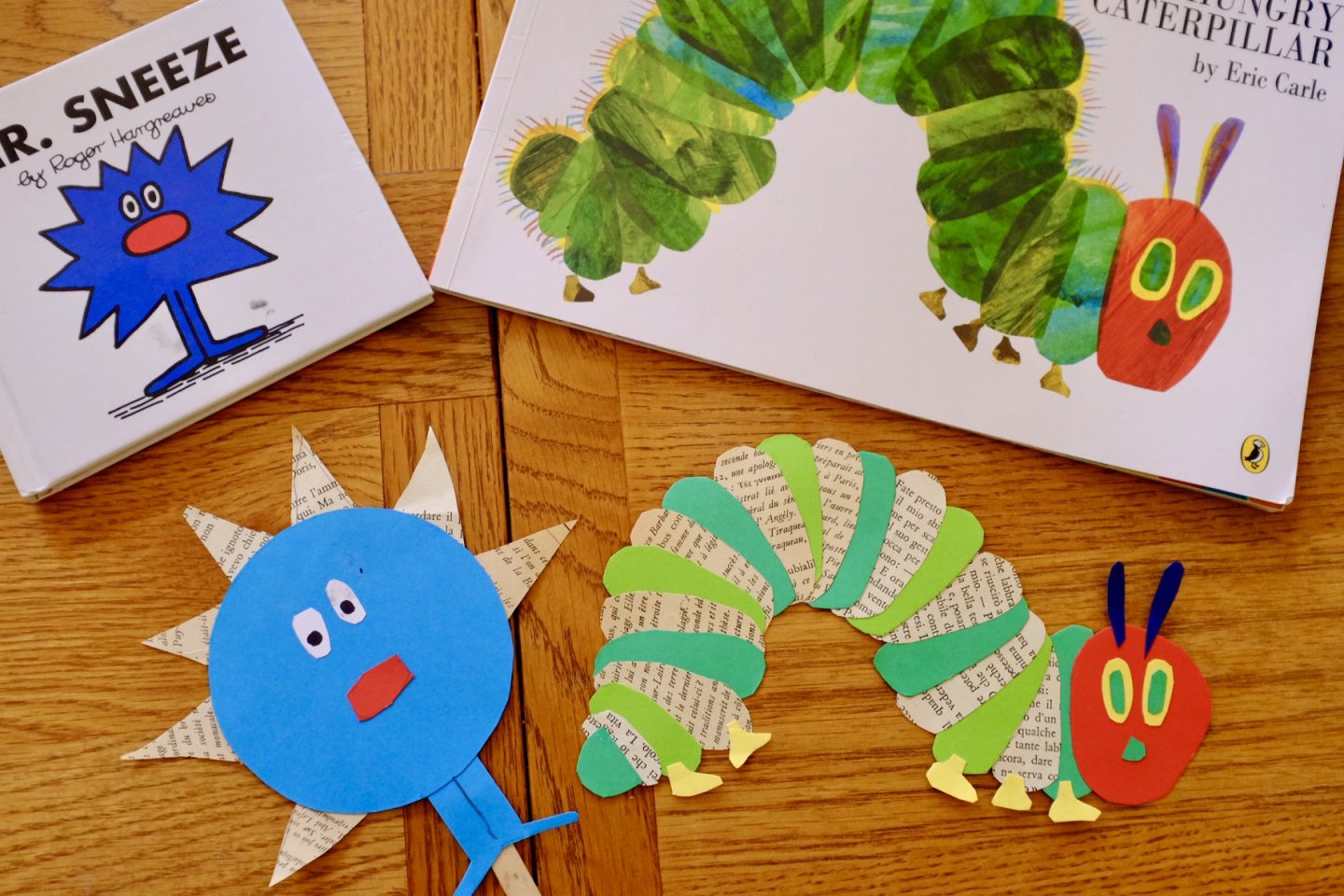 I am a bit of a novice when it comes to World Book Day, as my eldest didn’t always have to dress up both in nursery and reception. They seem do it now and then. I remember when she was in nursery she dressed up as Burglar Betty from one of my favourite books Burglar Bill! She looked adorable. Last year, we cheated a little as she went as herself from her personalised book!! What I haven’t done before is World Book Day crafting! We were challenged by Viking to do some Book Crafts for World Book Day and I was quite excited. We love a bit of crafting.

We were kindly gifted some stationary and crafts, including real pages from a book and book on book art! I’d never heard of book art before and some the projects looked so impressive. Viking have blogged about one of them – a lion! You can read about this here and this gave me the idea of making two characters from my eldest’s books, using some of the materials sent, including the book pages. 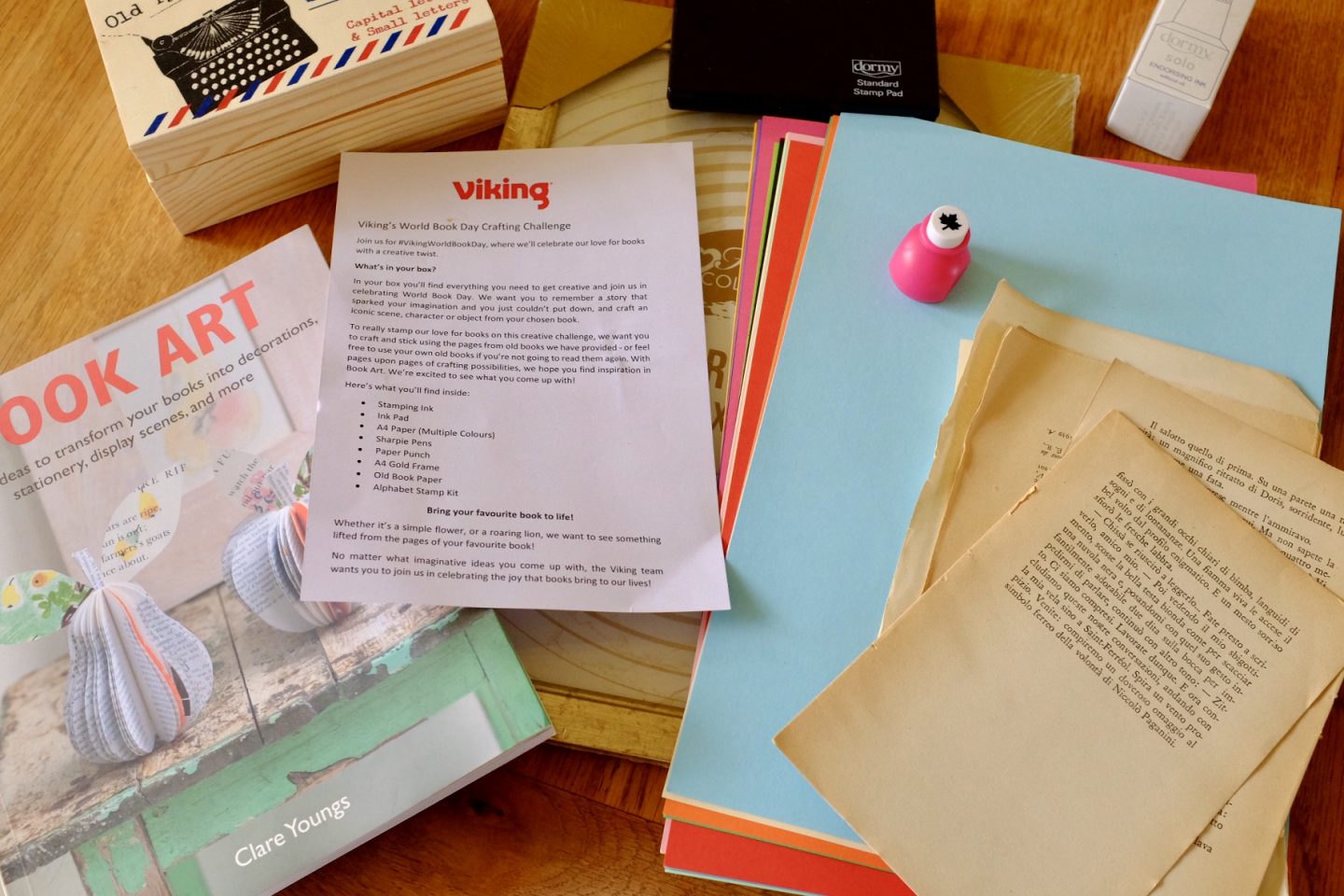 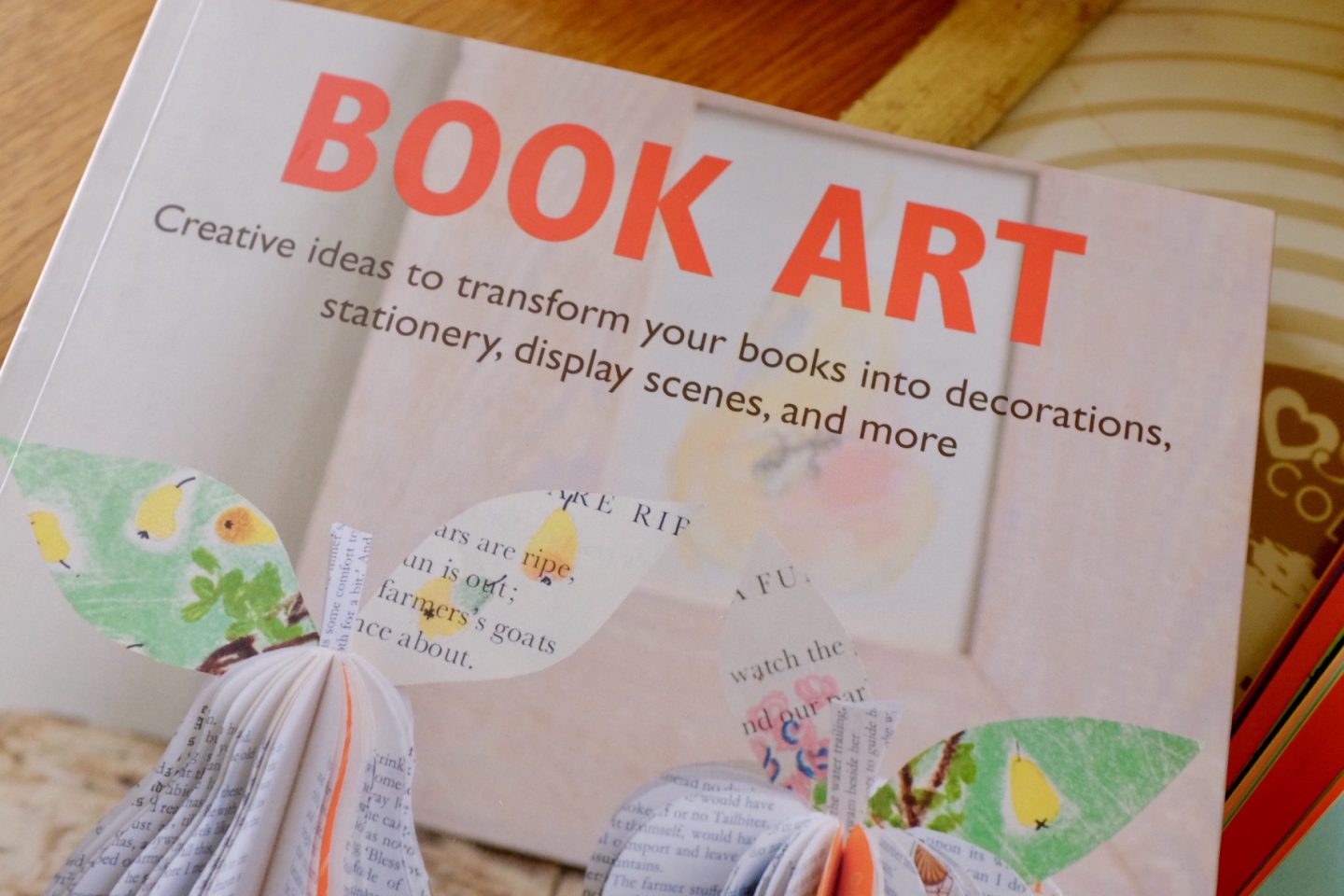 At first my eldest wanted to do a bunny but a very non-descript bunny! She brought down a random book and then decided this bunny would be too hard! I suggested a Mr Men character and she was sold and immediately had an idea.

I knew I wanted to do The Very Hungry Caterpillar. Originally this was going to be with her baby sister but all she wanted to do was cut paper up and I was very happy to let her get on with that! 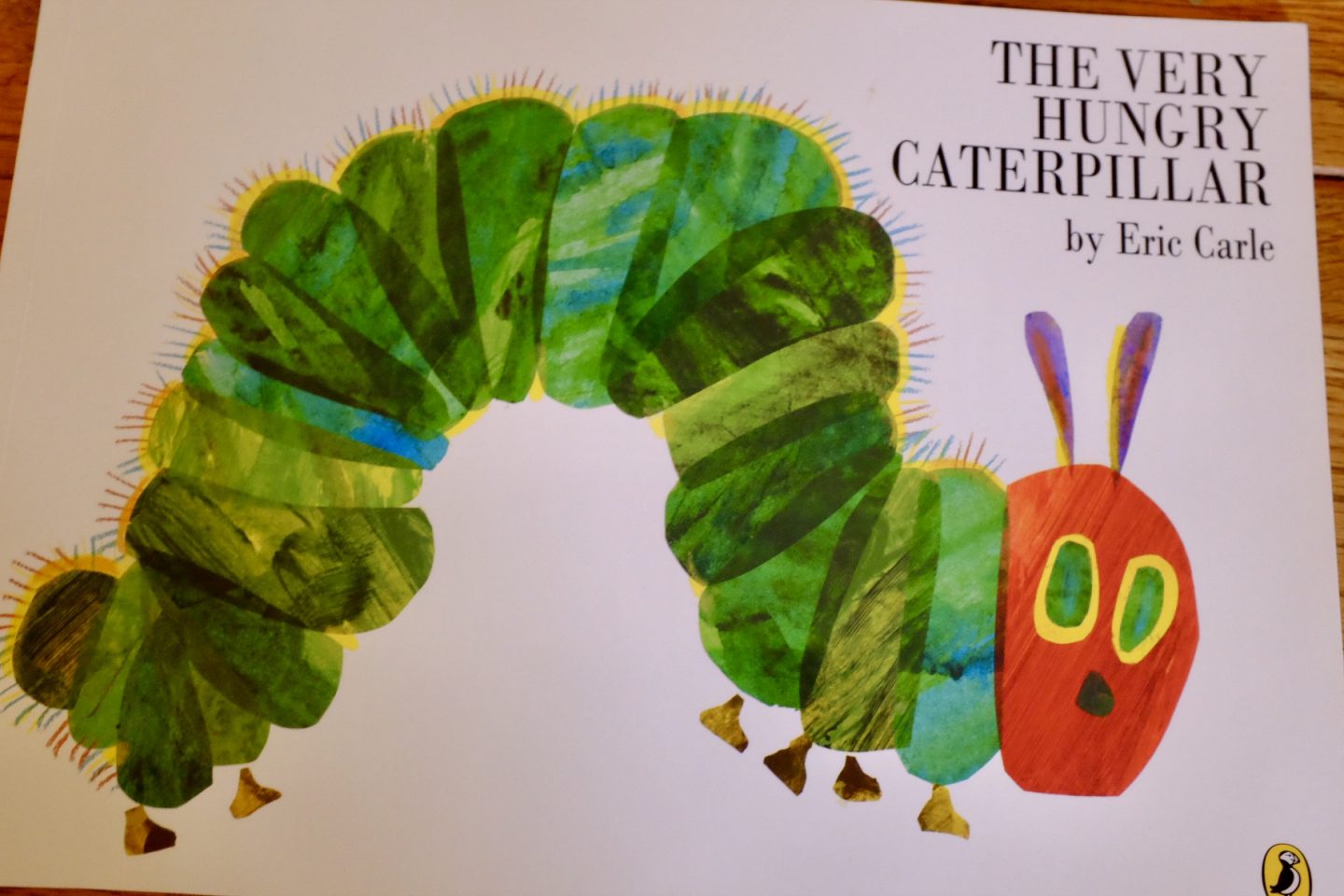 My eldest came storming back downstairs and had decided on Mr Sneeze and she knew exactly what she was doing. 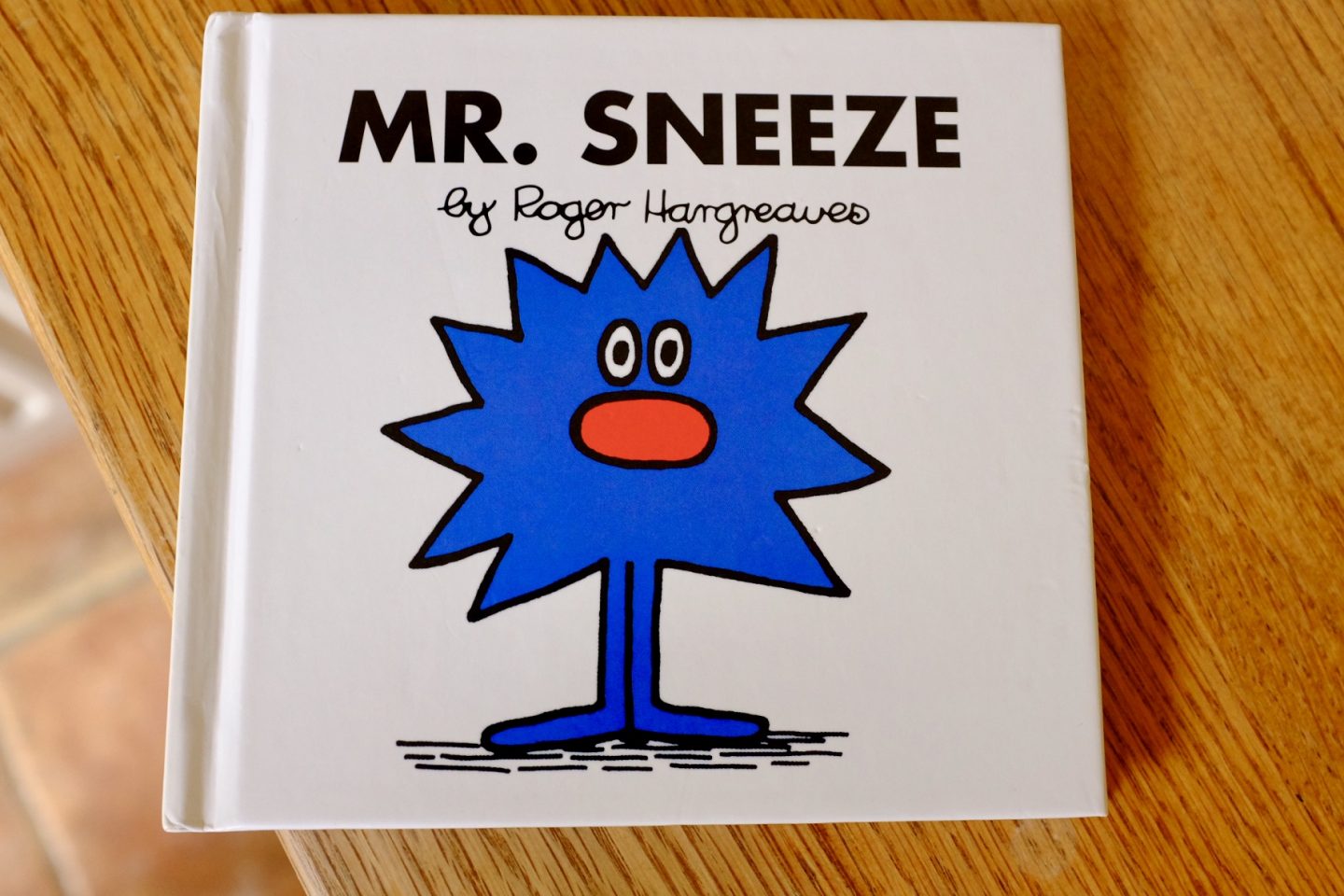 – Old pages from a book

We first drew around a cup for the circle Body of Mr Sneeze. I helped my eldest cut this out. 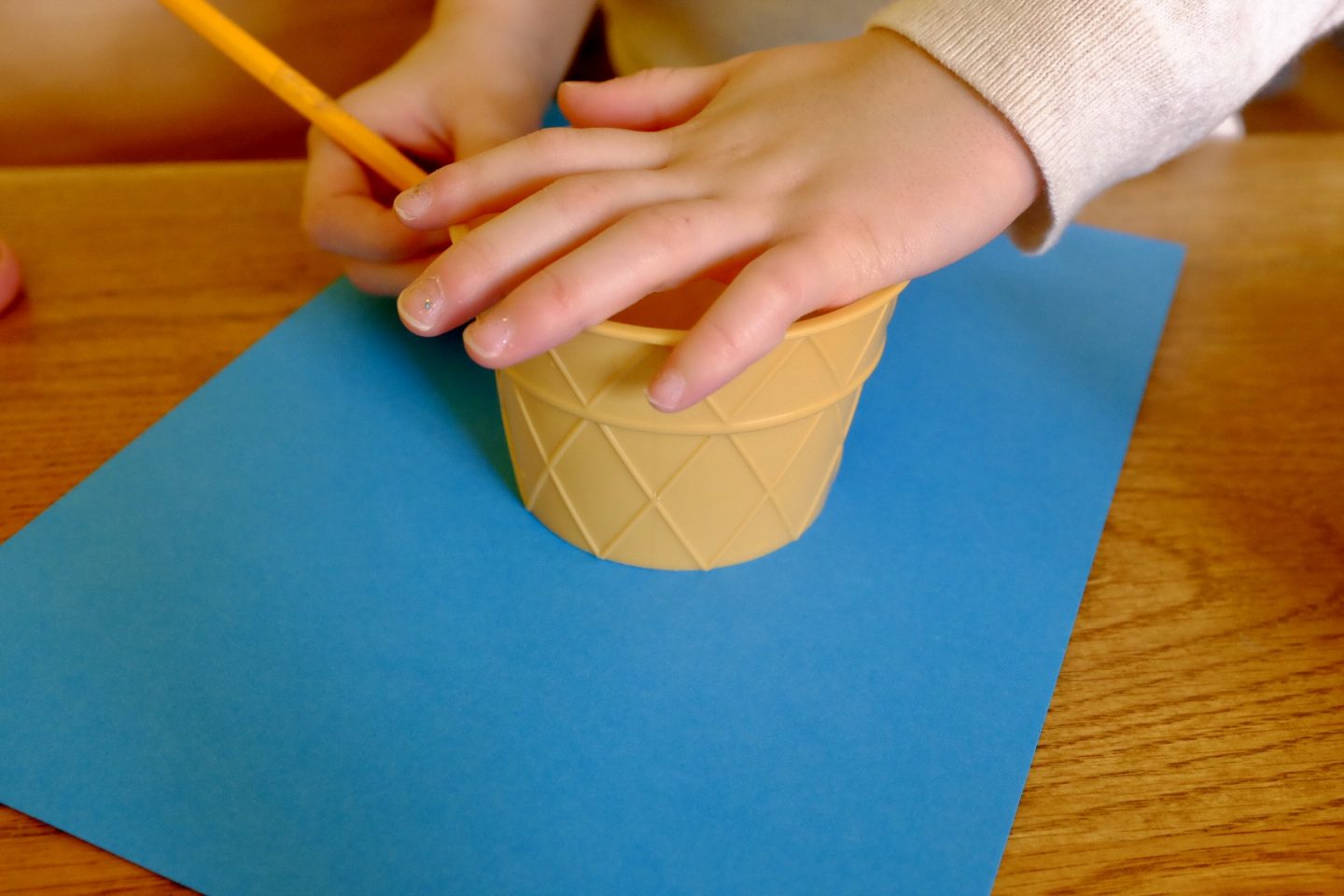 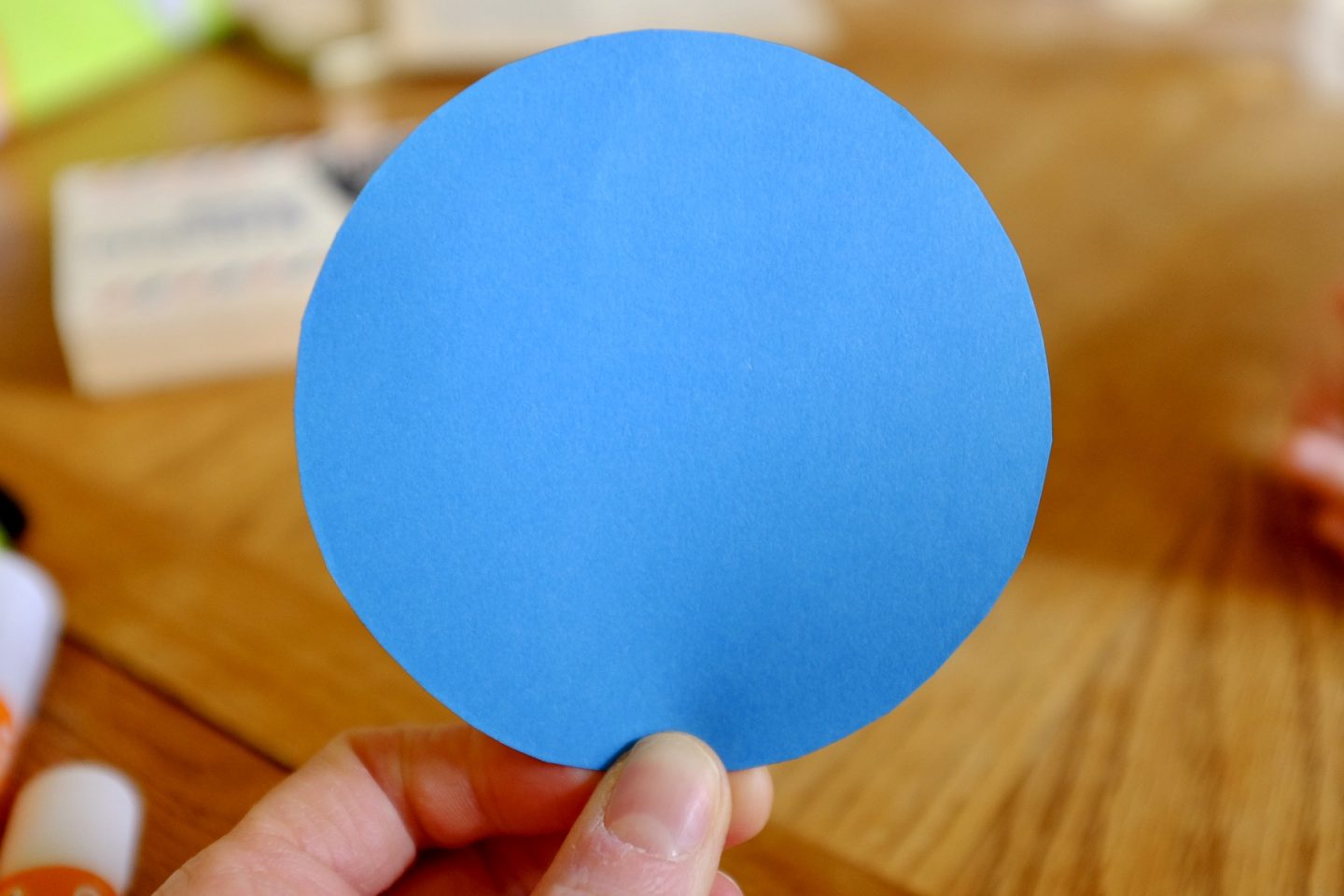 She then decided she was going to use the book pages to make his spikes.  She drew and cut one out of the cardstock and then used this as a template for the rest of them. 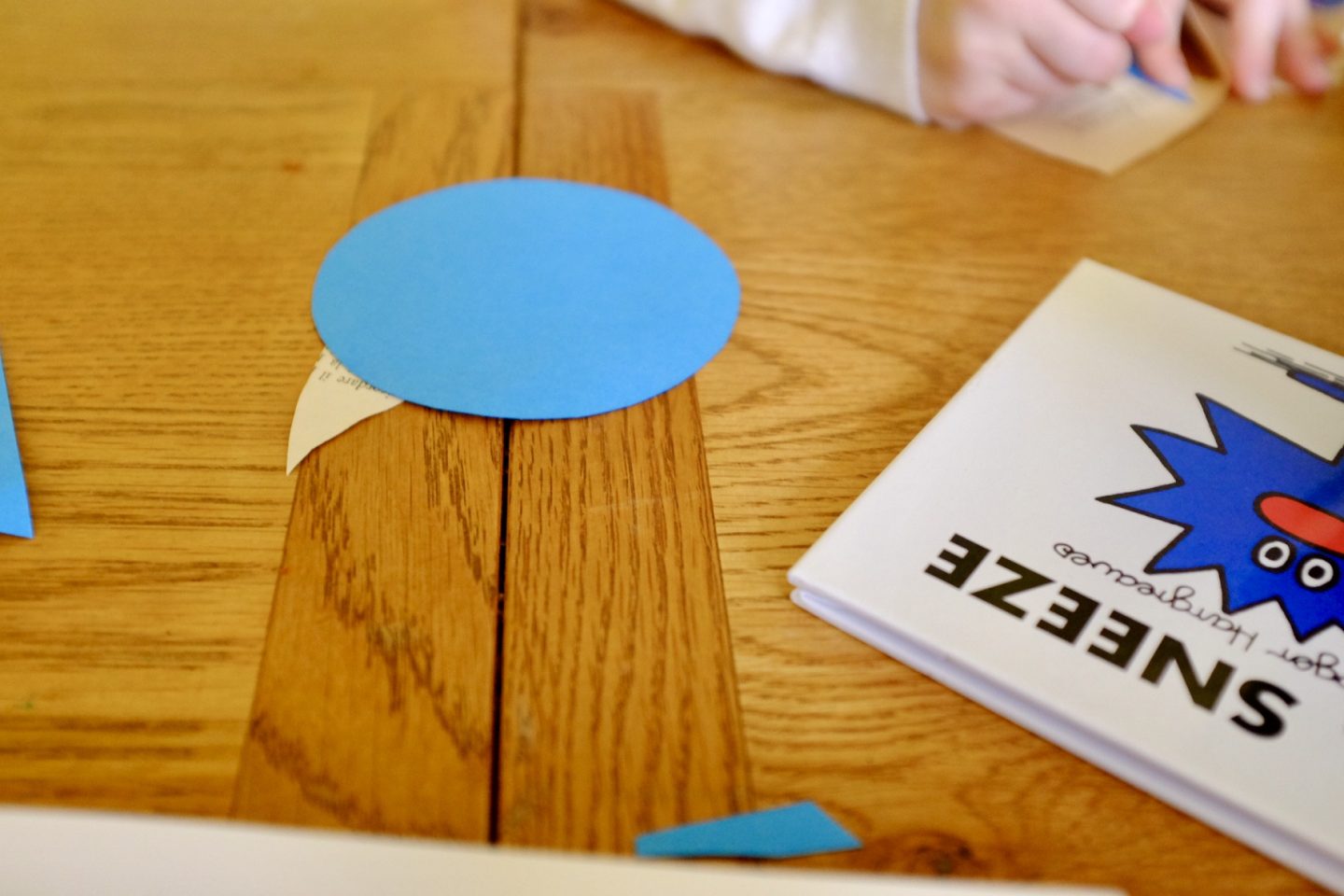 After cutting out enough spikes she glued them around the edge of the body. 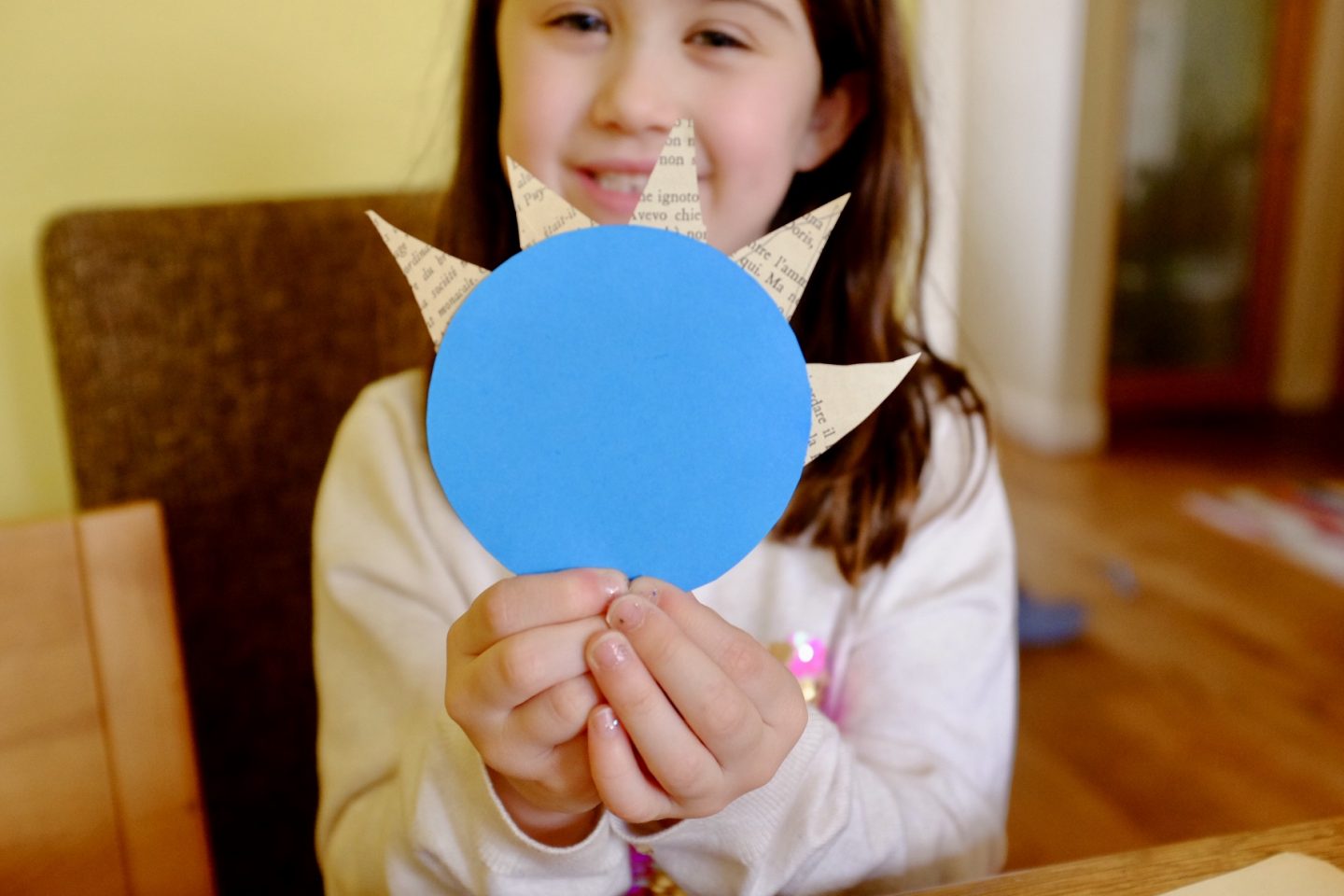 Next she asked to draw and cut out some legs for her, which I did.

She then used the red cardstock to draw and cut out Mr Sneeze’s nose.

She asked me for a little help with his eyes.

She was done! So simple. She wanted to mount hers on a lolly stick so she could make come alive a little and she did! I was pretty proud of her. 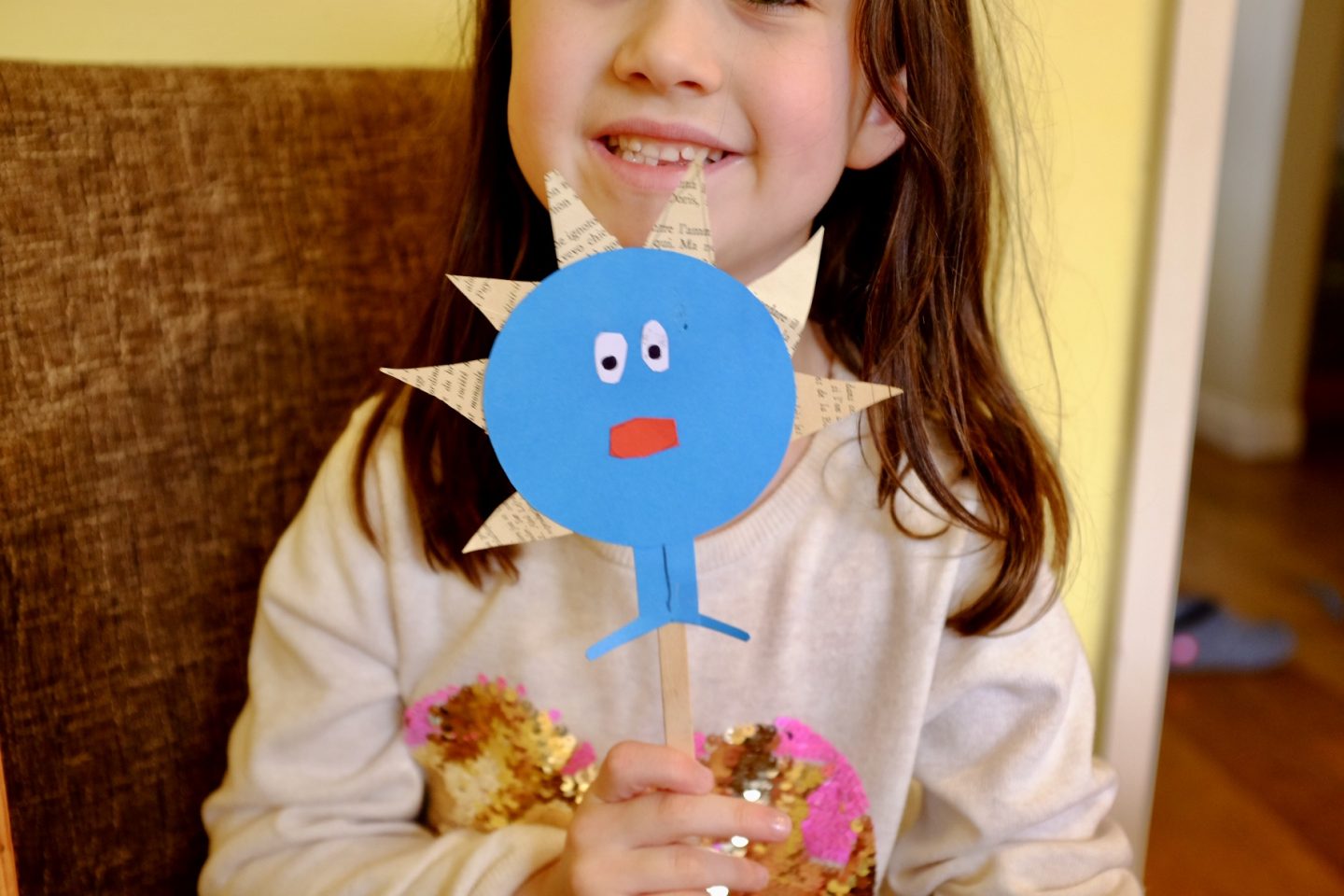 I started by copying the head of the Very Hungry Caterpillar by hand and I then cut out. I need drew the eyes using yellow and green cardstock, again by hand and cut out and stuck on the head. 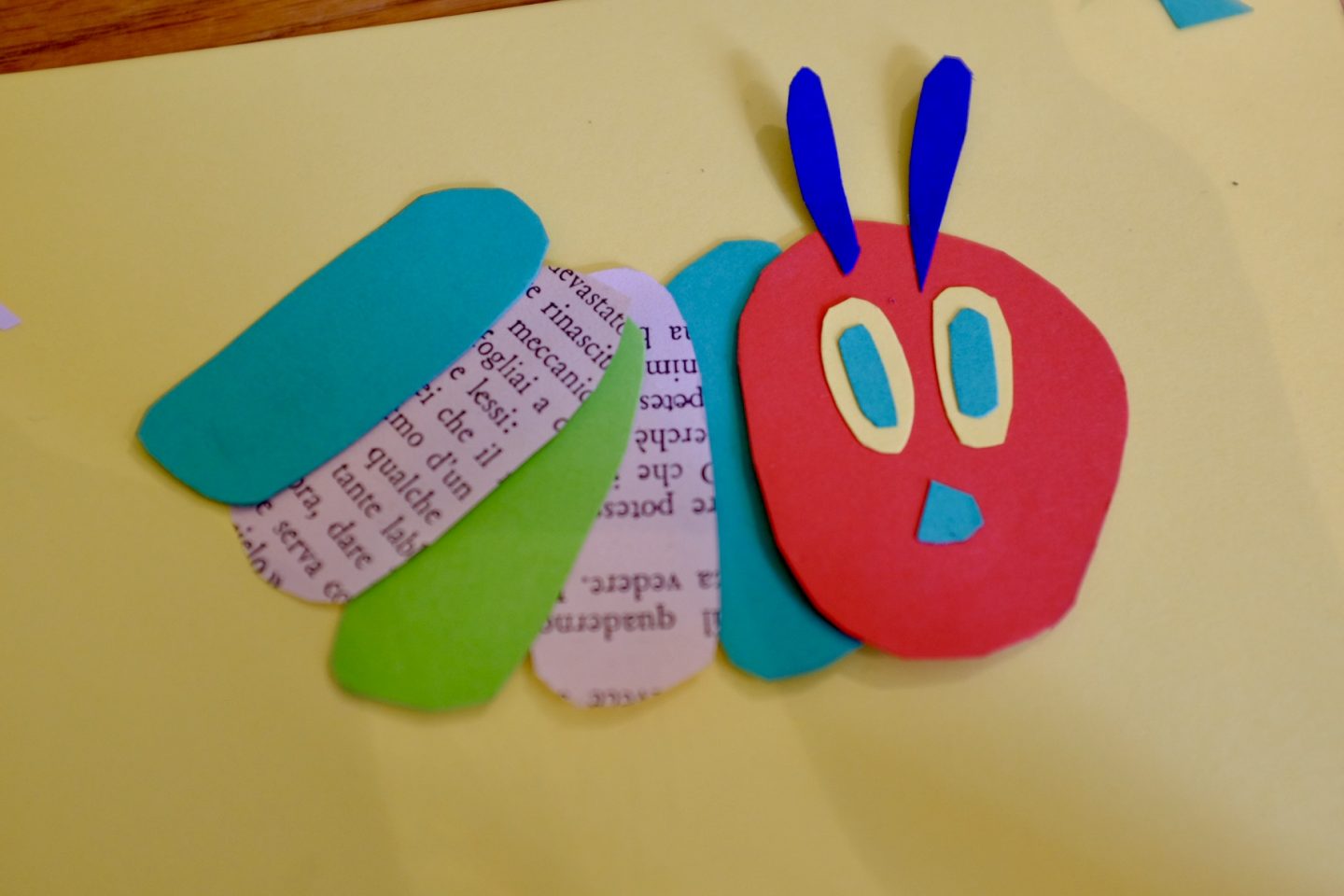 I then needed to work on the body. Using the green cardstock I drew an oval part of the body to use as a template for the rest.

I then cut out more sections in the other shade of green and using the book pages.

When I had lots, I started sticking over one another, to make the Body of The Very Hungry Caterpillar. 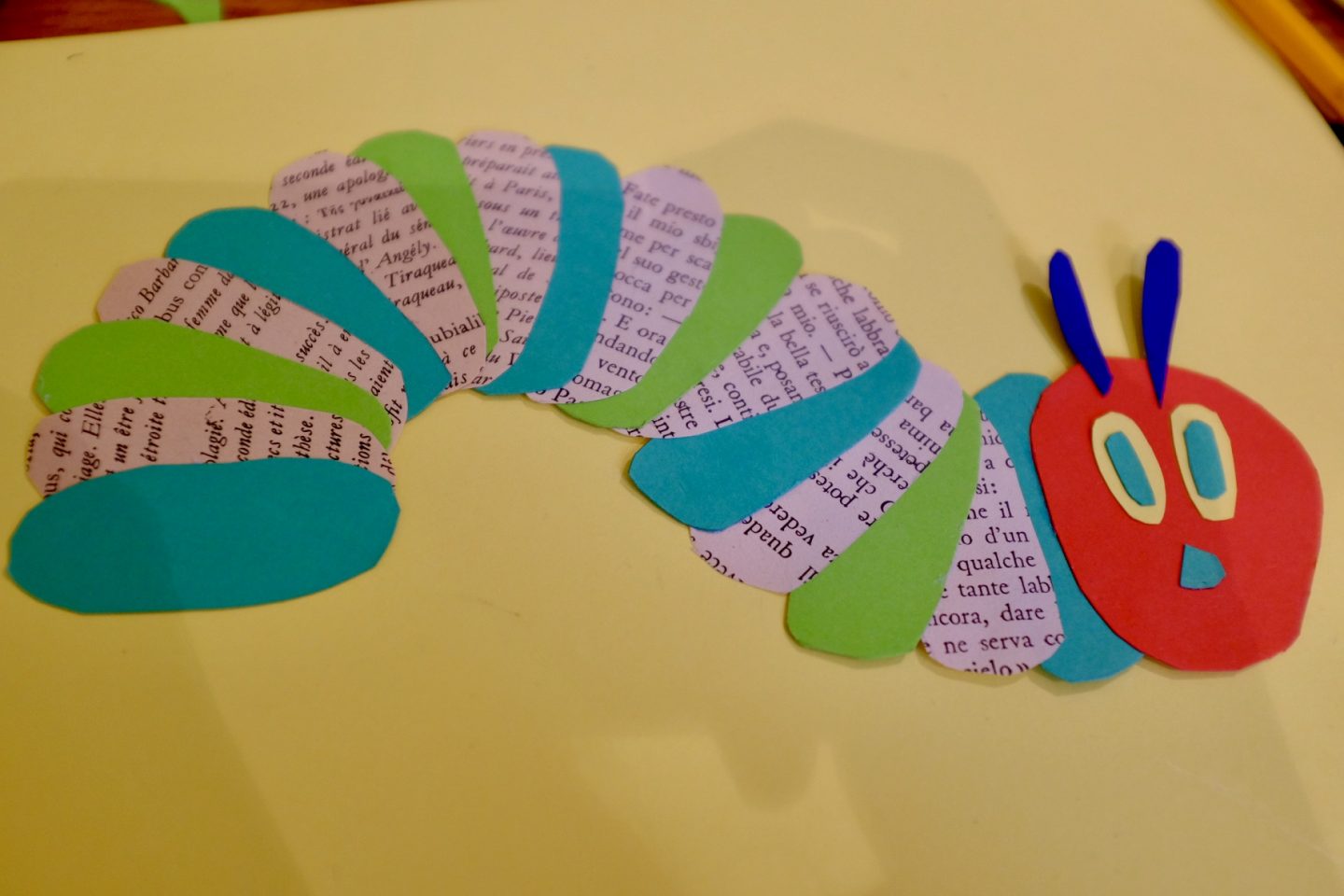 For the last bits at the end of him, almost his tail, I drew and cut out smaller ovals and stuck down.

Finally using the yellow cardstock, I drew and cut out his feet and stuck down. 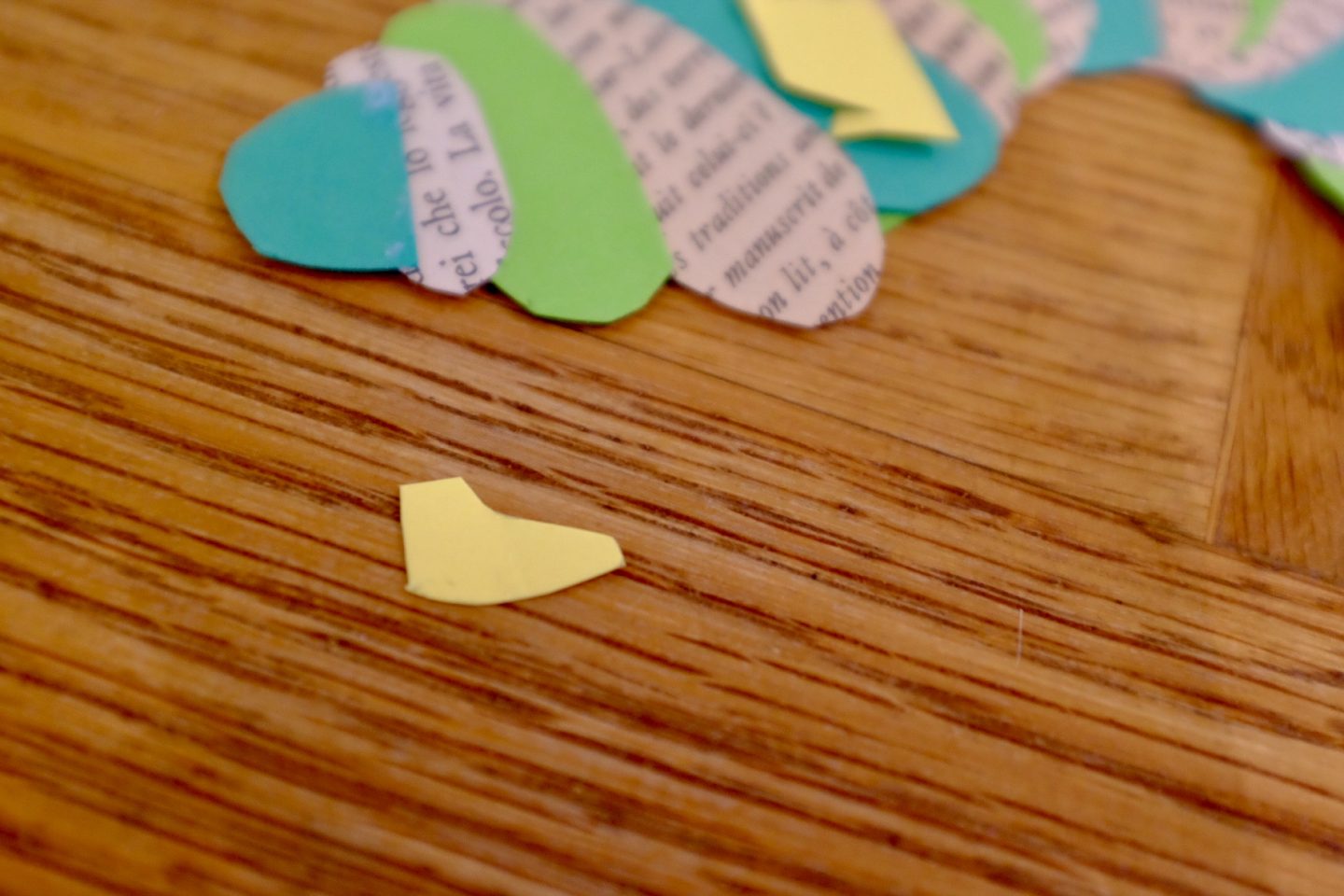 And voila – there you have it!

These projects are simple and easy and lovely for your kids to do, celebrating World Book Day! Of course don’t use new books for the book paper!

We had some great fun and lovely for her to take to school on World Book Day. 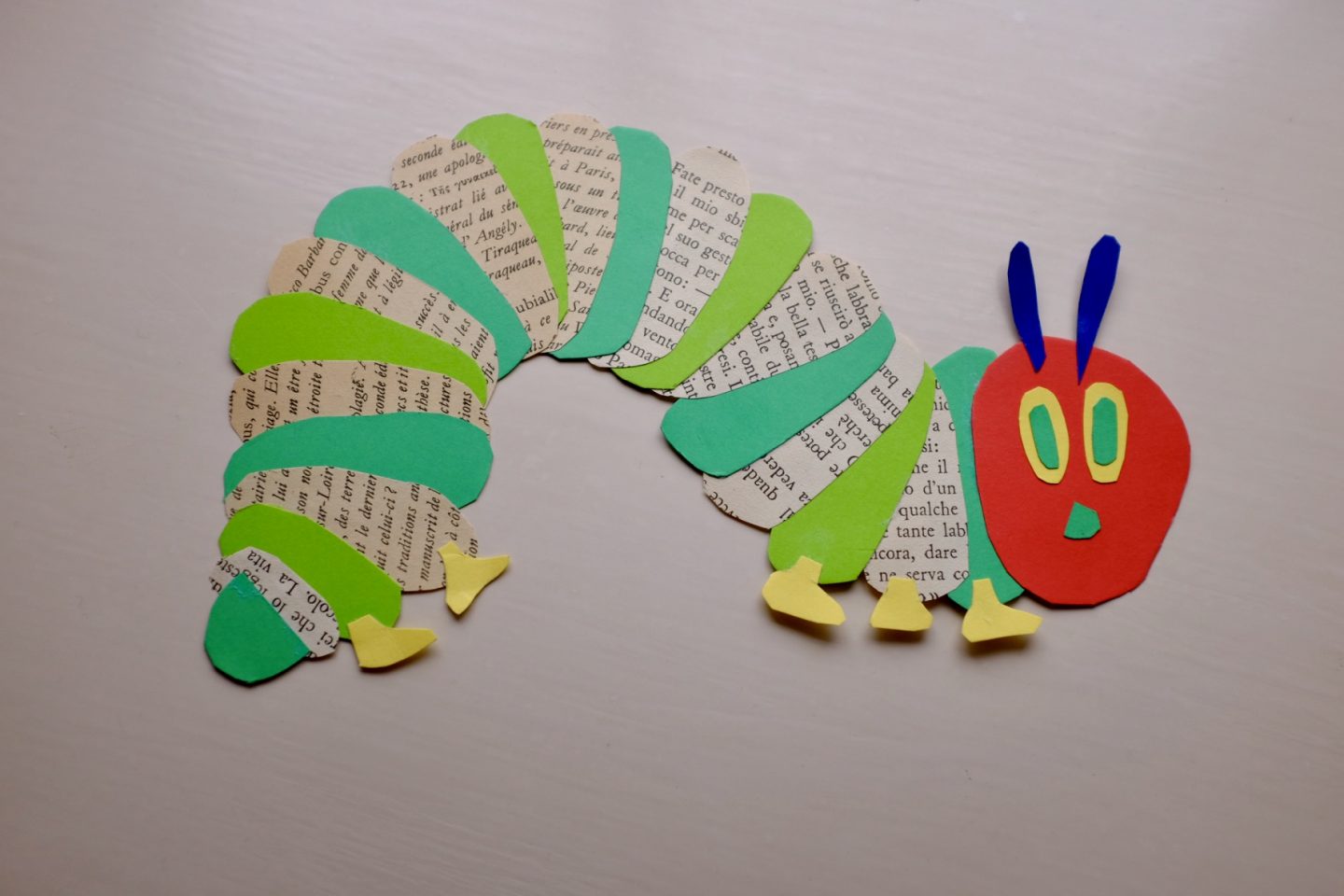 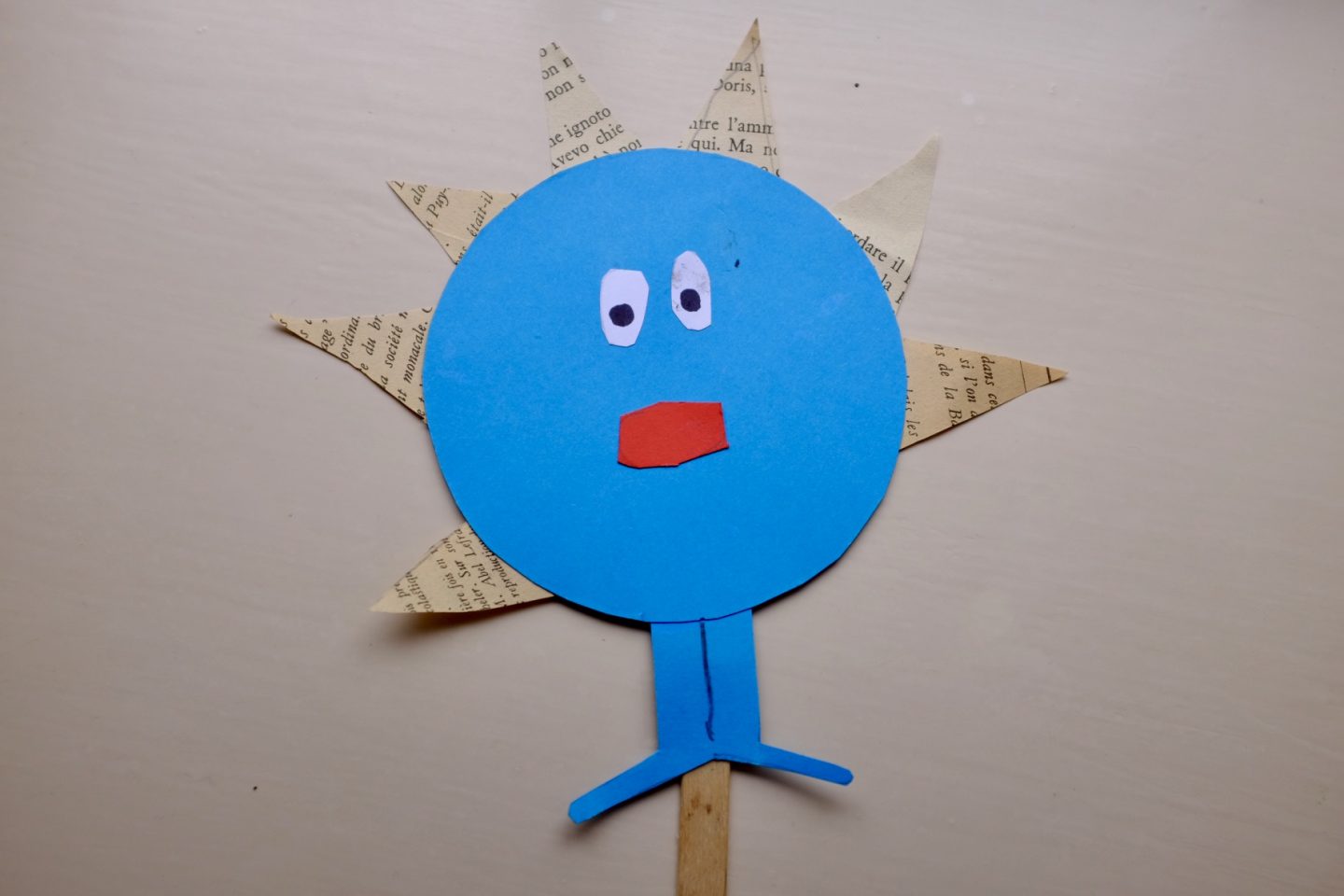 If you have a go at any, let me know in the comments! 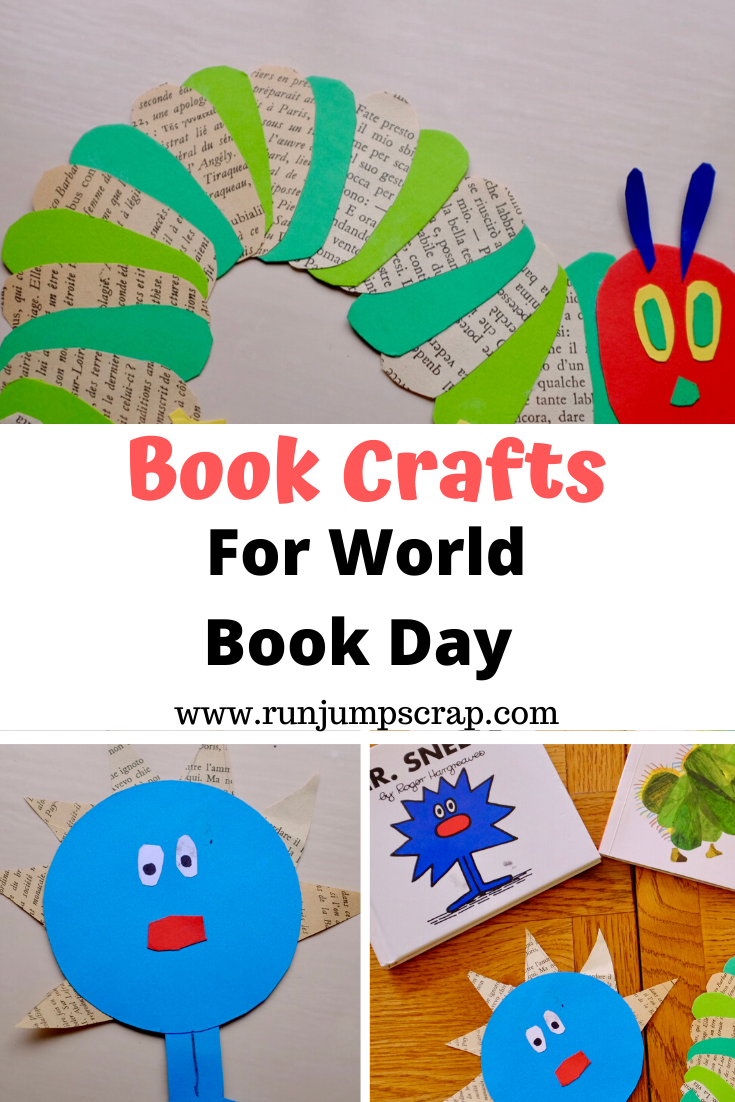 Disclosure – we were sent some projects, in exchange for a mention in a blog post. All thoughts and opinions are my own.