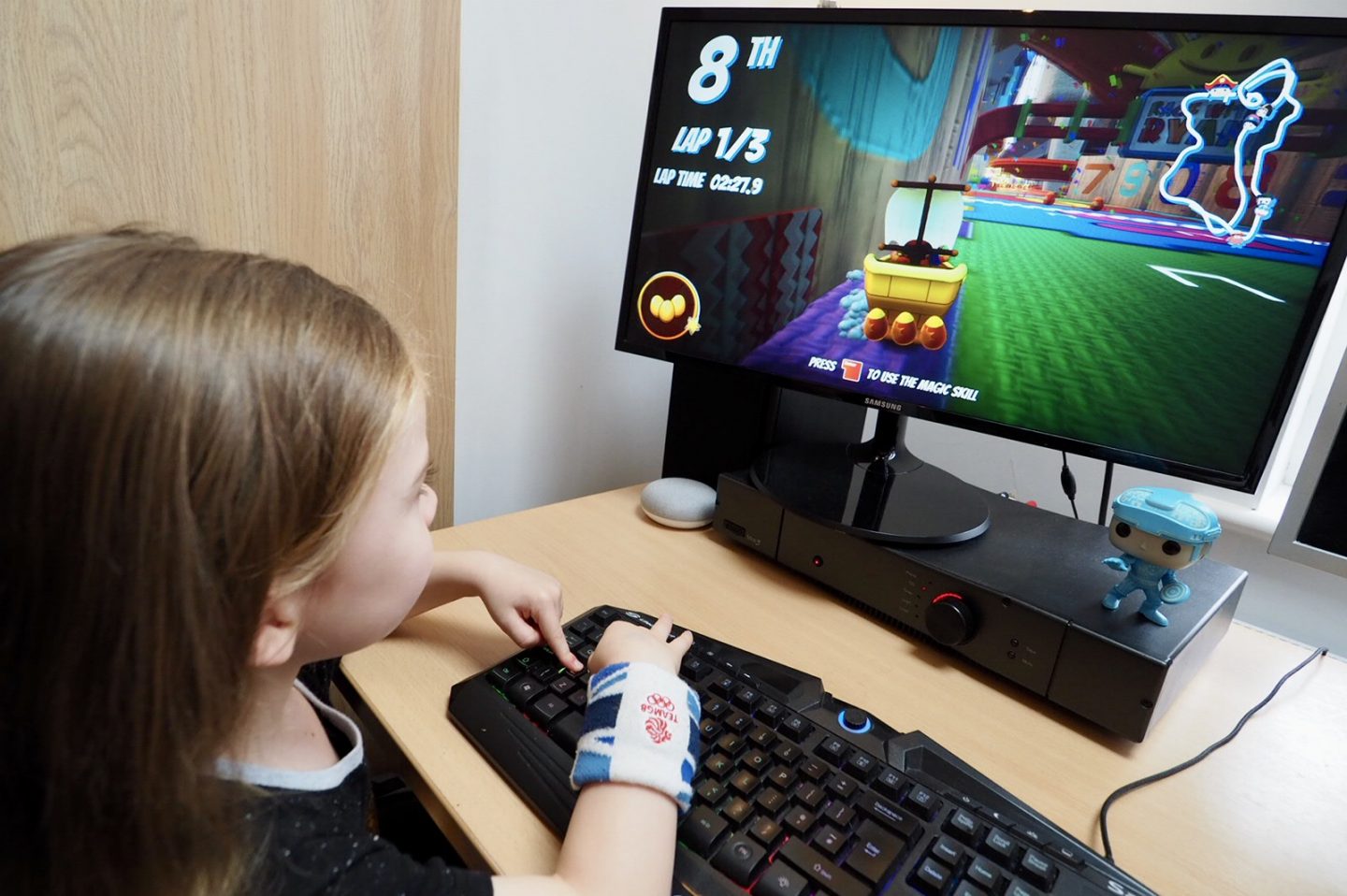 I wrote this in a recent post. I must have been living under a small rock for a while, as I had no idea who Ryan was from Ryan’s World! My eldest of course knew who he was. She is subscribed to his channel and loves to watch some of his challenges.! It was an education for me. Ryan’s World is a children’s YouTube channel featuring Ryan Kaji, who is nine years old. His mother, father, and twin sisters are involved too and the channel usually releases a new video every day. It is a hugely popular channel with over 27 million subscribers and there are plenty of educational videos, reviews and fun with his family. As he is so popular he has his own toys on sale, his own animation show and his own video game, Race With Ryan which is now being released as Race with Ryan: Road Trip Deluxe Edition.

You can see the trailer here.

More About The Race with Ryan: Road Trip Deluxe Edition

Race with Ryan has been available for a while now and is available on Nintendo Switch, PS4 and PC. It is aimed at children aged 3 years and over and you can play alone or in multi-player mode with 2-4 players, in a split screen.

You start by picking a racer and head to one of six magical locations, and hit the gas to show your friends and family who the fastest racer really is. Ryan’s famous Mystery Eggs are scattered across each track, and they’re full of surprises! You may find a Burger Shield, Sticky Slime or Trick Surprise Eggs.

You will also find Ryan’s World characters, including Policeman Ryan in his Patrol Car, Red Titan, Gus the Gummy Gator, Pirate Combo Panda, plus many more you’ll unlock as you race your way to the top. 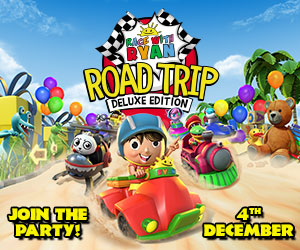 There are simple controls, optional auto-acceleration and a tutorial to guide younger players through their first video game. I knew my 4 year old would need this, as is quite new to video games.

However, there is now more as the Race with Ryan: Road Trip Deluxe Edition is now available from Smyth’s Toys. Price is variable depending on which device you buy it for. 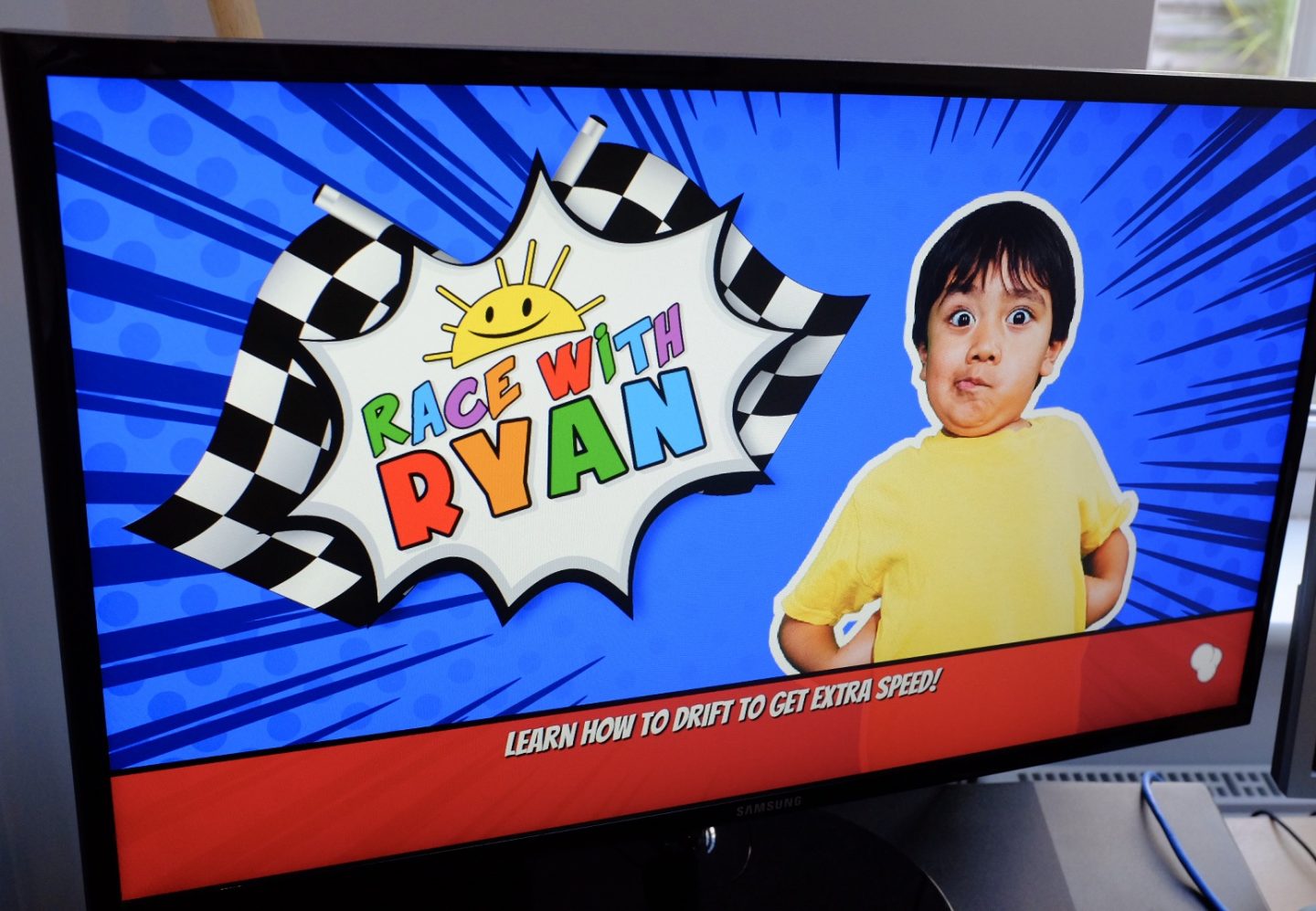 The Road Trip Deluxe Edition is the same in many respects as the original Race with Ryan, as mentioned above but has 12 new USA-themed drivers including American Titan, Kansas Gus, New York Lexa and more. There are also 4 new circuits which are so bright and colourful. Go west on historic Route 66, see the Christmas trees in Icy Land, get back to nature in Redwood and zoom past traffic in the New York.

I was excited to get the girls playing.

If you already have the Race with Ryan game For those that already have the game there is the option of 2 extra content packs which are available. Each have two new tracks to race on and 7-12 new racers in them.

My girls were very kindly sent some goodies to help them have a Race with Ryan PARTY, to celebrate the Road Trip Deluxe Edition. Well why not? Exciting times, especially with Christmas coming! 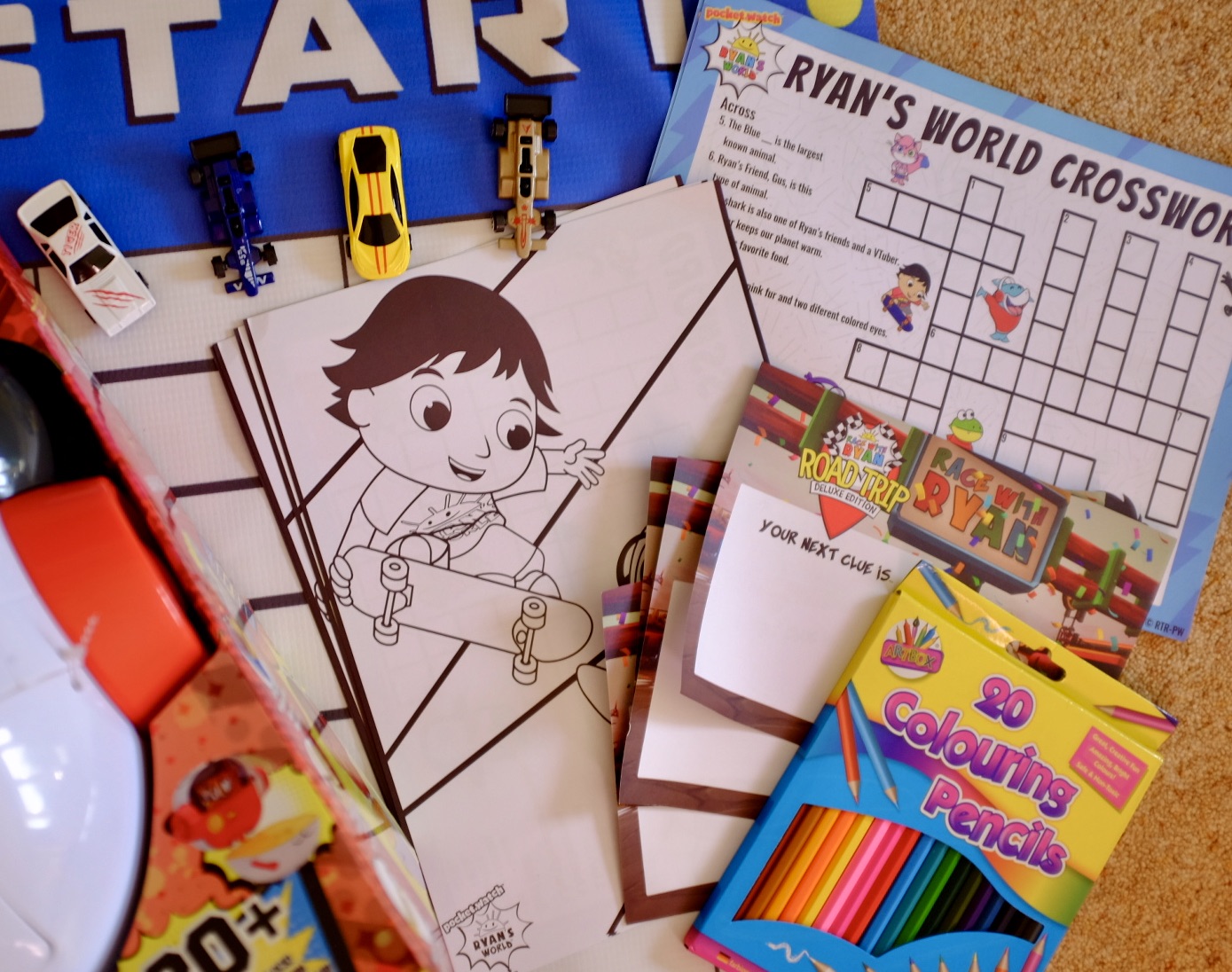 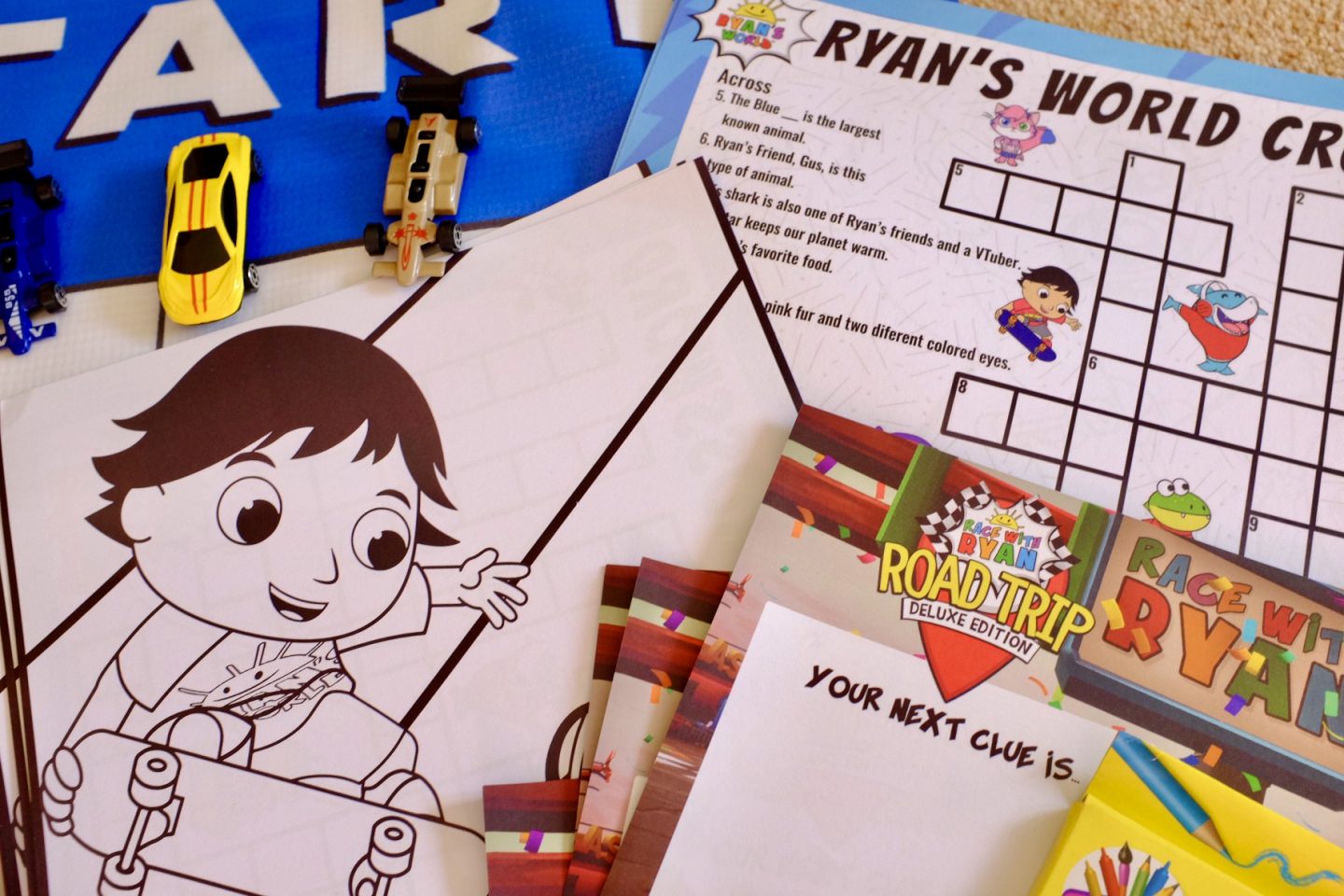 My personal favourite thing they were sent was the Ryan’s World Panda Head Playset and you can read my full review here. It was such fun to unbox and set up. All three of my little ones have loved playing with it since! It is available at Smyth’s Toys for £34.99. 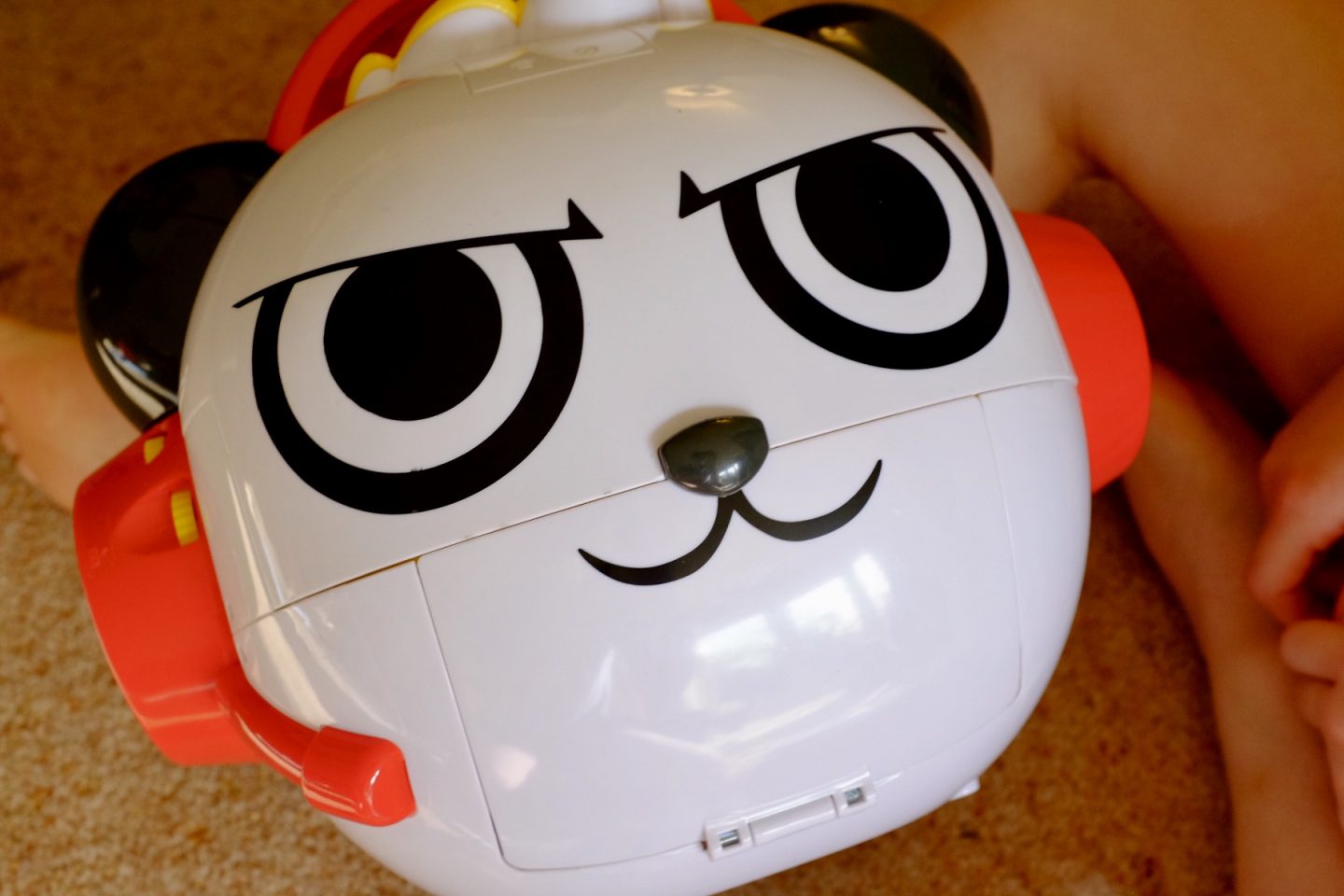 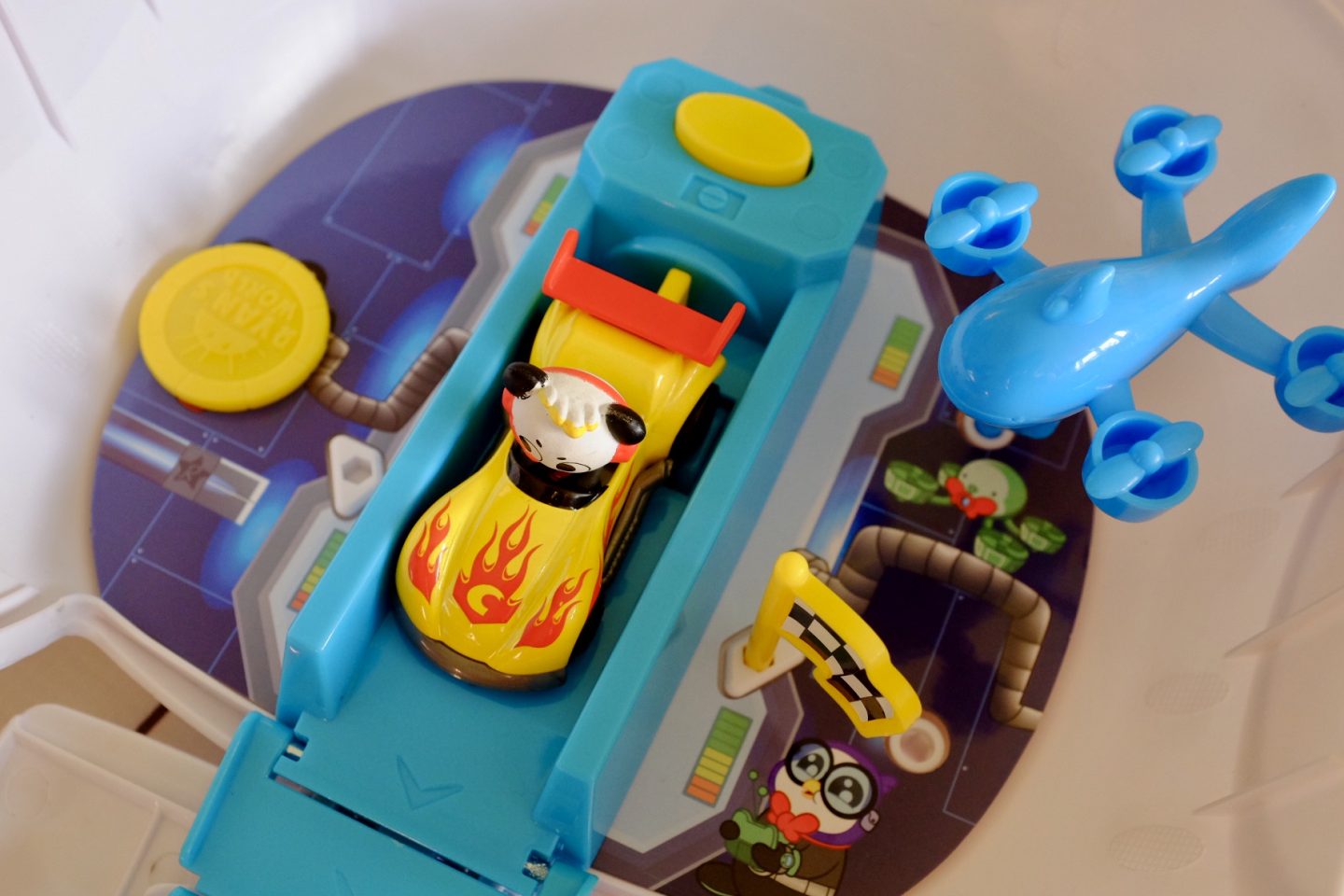 The girls were sent some Ryan’s World colouring goodies and puzzles. 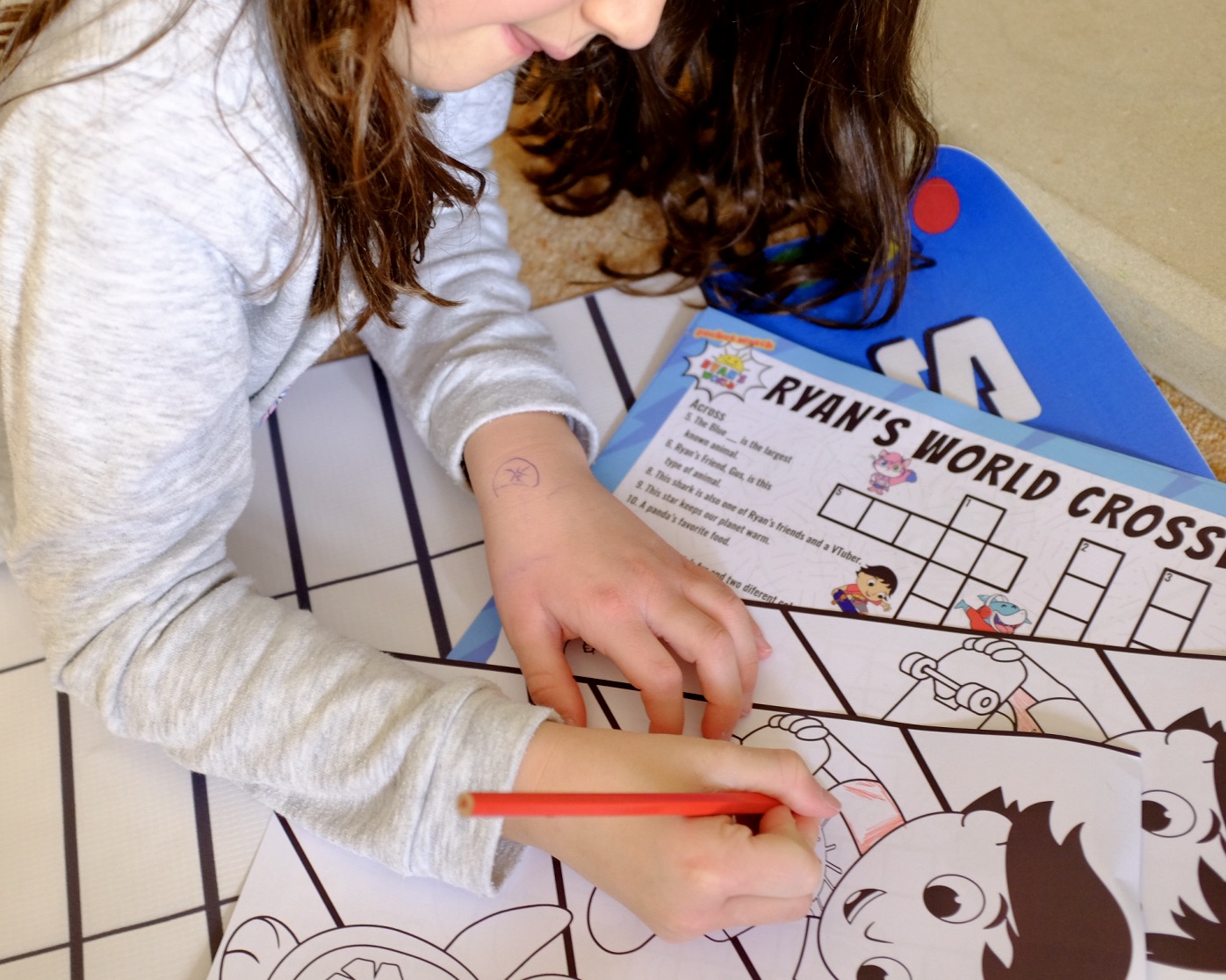 We also set up a treasure hunt for them. I hid the cars from the Panda Head Playset and there were given a set amount of time to find them, using the egg timer! This was great fun! the girls love a treasure hunt. 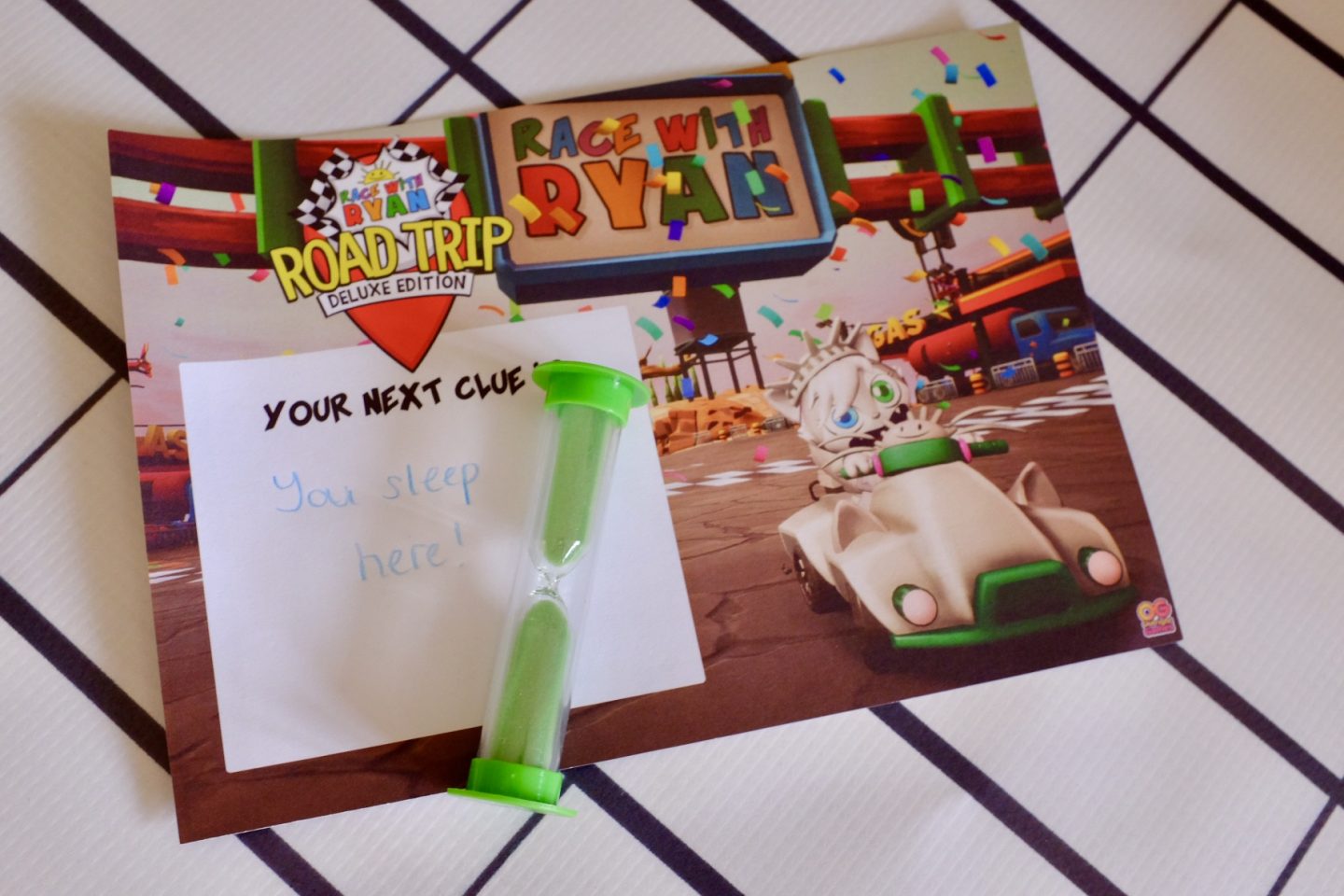 We also had some cars and a cool mat sent to play a game of who gets to the end first. Simply roll the die and move your car along! The girls had some fun!

My girls both had a go with this and had fun! We have a PC but we did unfortunately found we could not get multi-player working, either on the same keyboard or on two different keyboards. Each girl had to play alone when having a go.

My middle daughter has just turned 4 and she played with her Dad. She did struggle to play at first, as isn’t a die hard gamer yet!

However, we had a go with the tutorials and simplified controls which was easier for her. You are able to sit and practice the basic controls, until you get the knack of it, or simply make it easier to play.

My eldest who is 7, got to grips with the controls, accelerating and steering the characters.

The main aim of the game is the complete the races, collect items such as Burger Shield, Sticky Slime or Trick Surprise Eggs. As you play you unlock characters and tracks to play more.

Ryan pops up now and then to encourage you!! 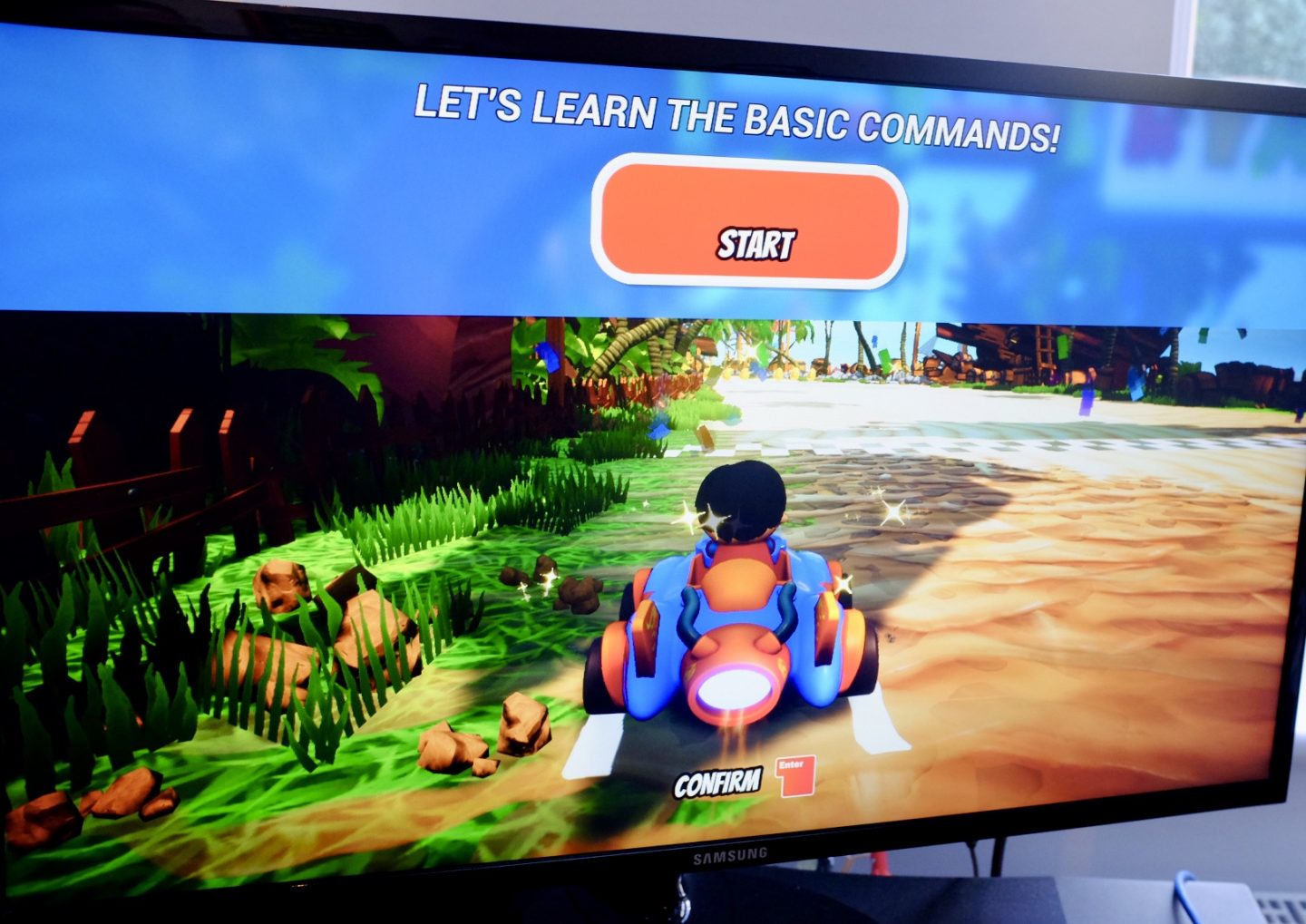 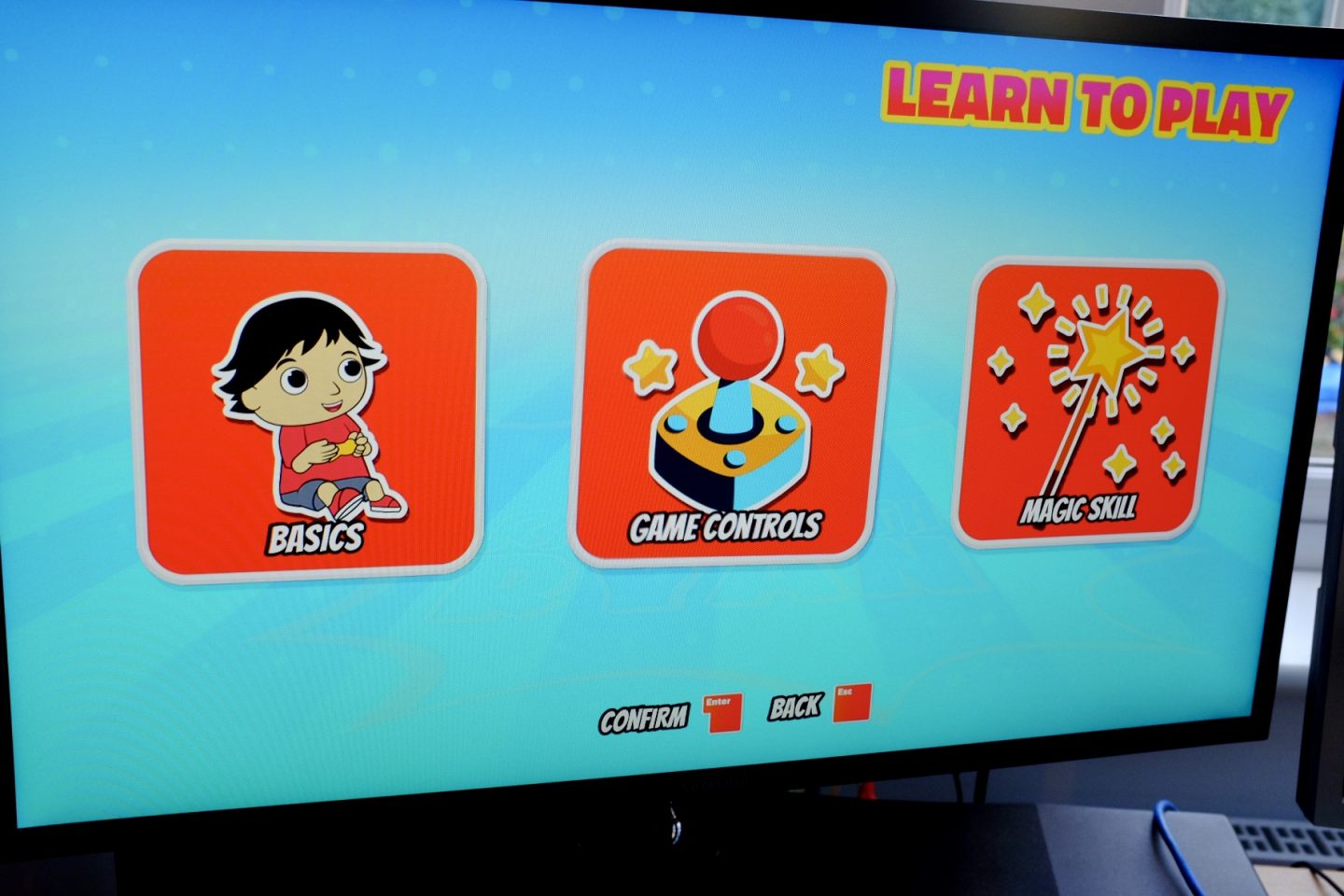 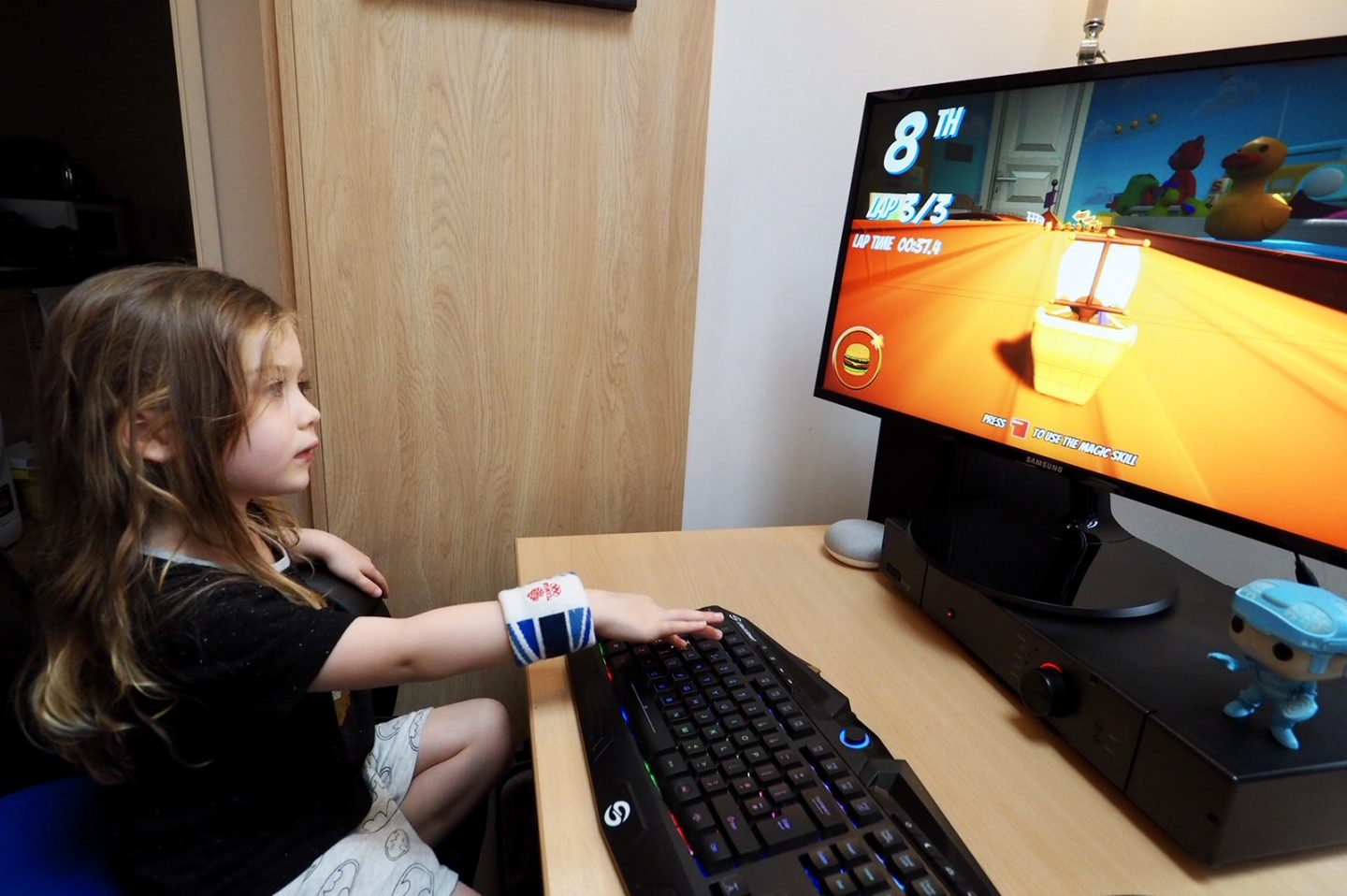 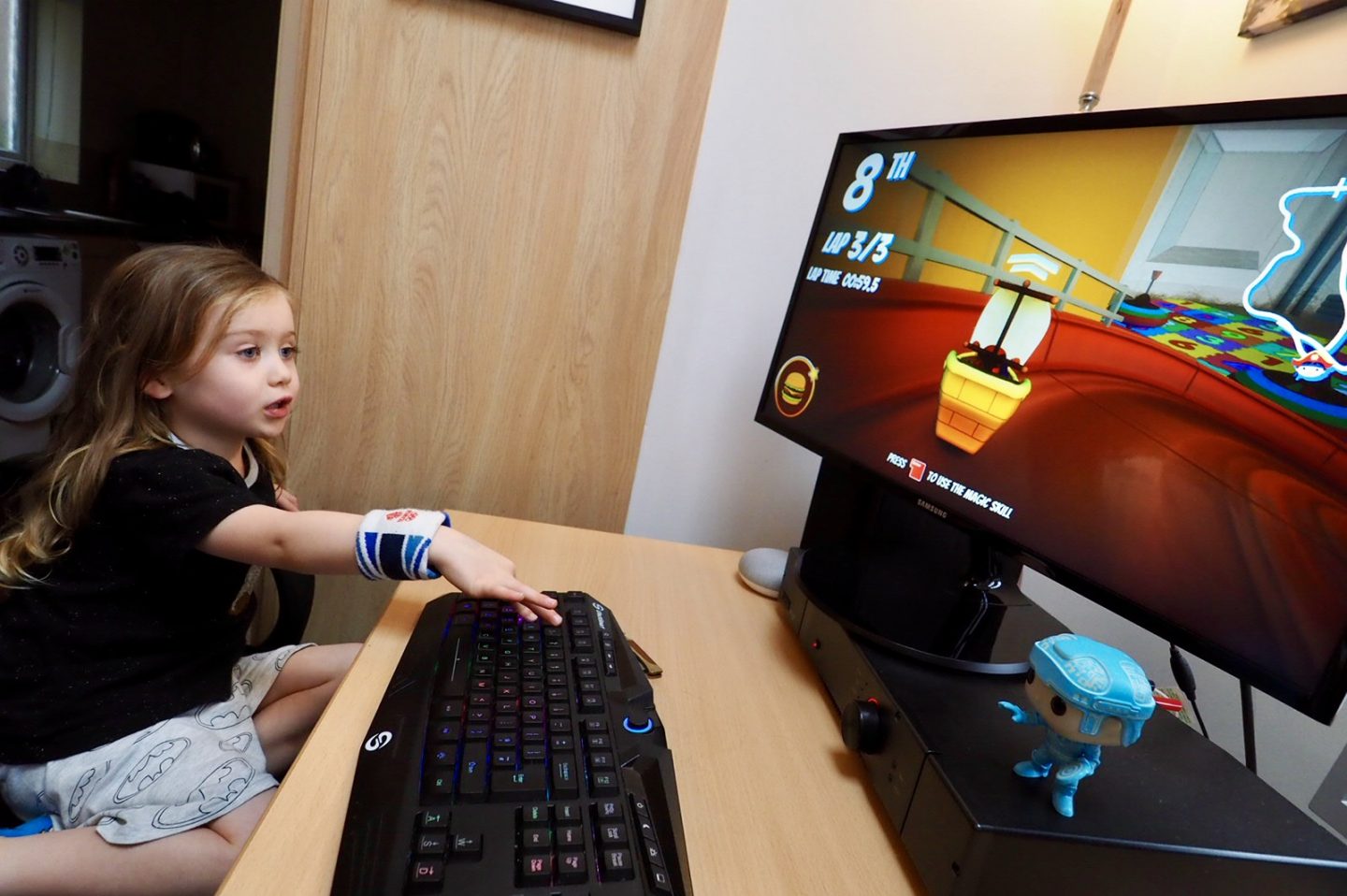 If you love racing games, you will love this game. Although we struggled with the multi-player aspect, it was still really fun in single player mode.

The whole game is very bright and colourful and you are just immersed pretty quickly. Kids who are huge fans of Ryan, will love him popping up and chatting or just his face appearing when they are playing. 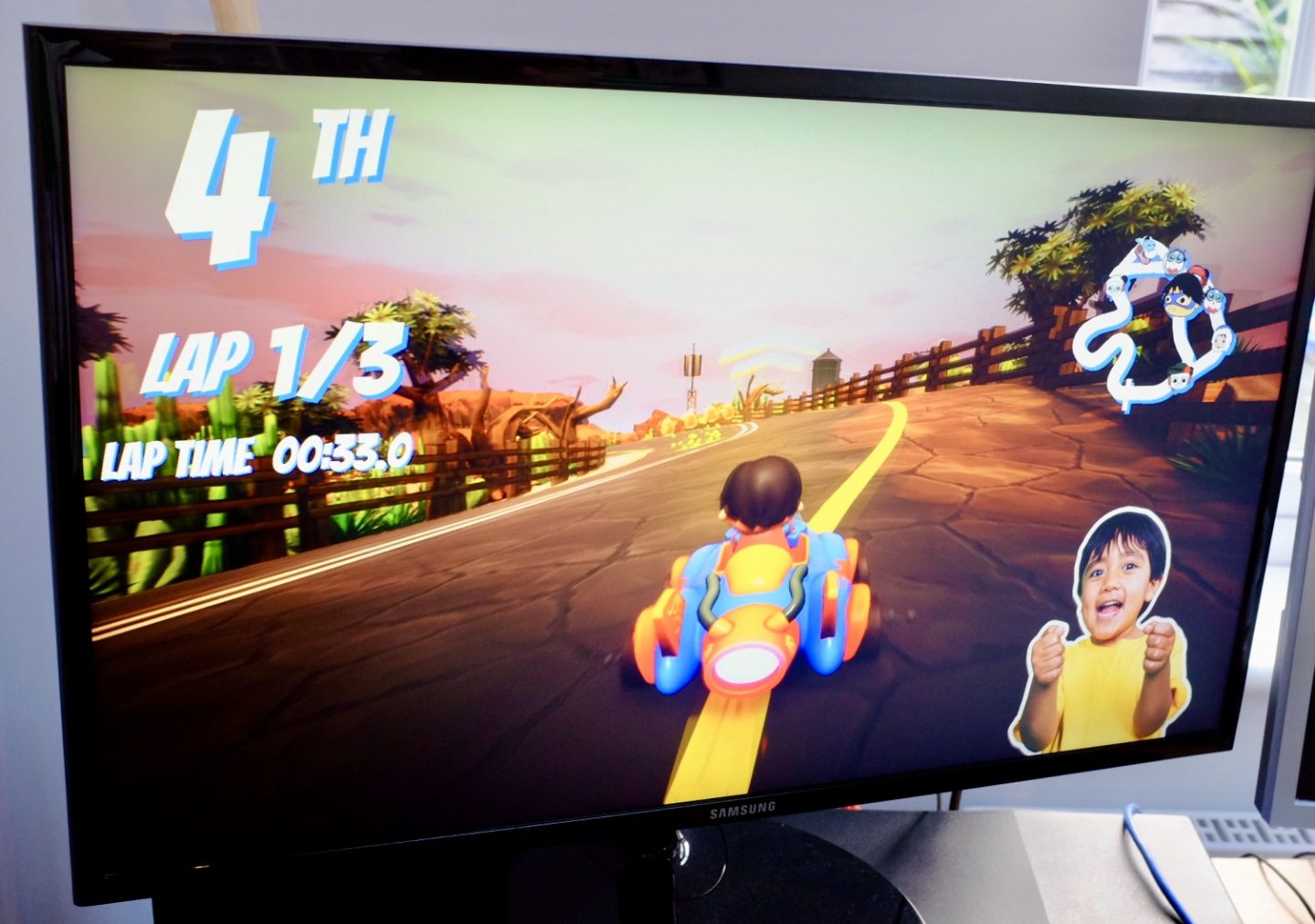 We played on two of the new tracks in the Road Trip Deluxe Edition – Icy land and Route 64. I remember when I was a kid playing games, the level or track can really make such a difference to the game play and these new ones are both brilliant. I loved Icy Land, as had a real Christmas feel to it, with Christmas trees and snow. As my kids are already pretty feral and excited already, they loved this too.

New characters are also fun too.It was so important to me as a kid, which character I chose! 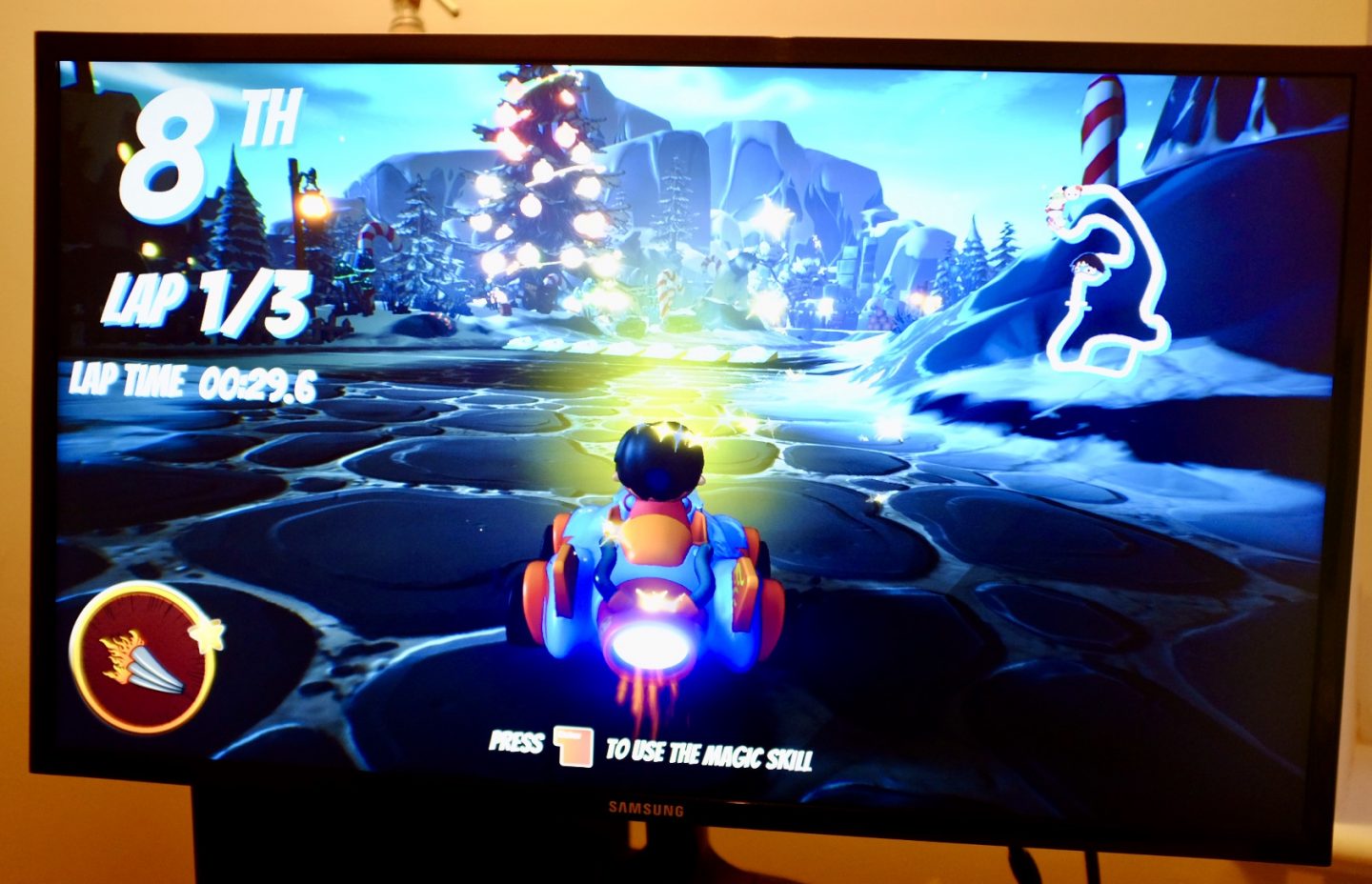 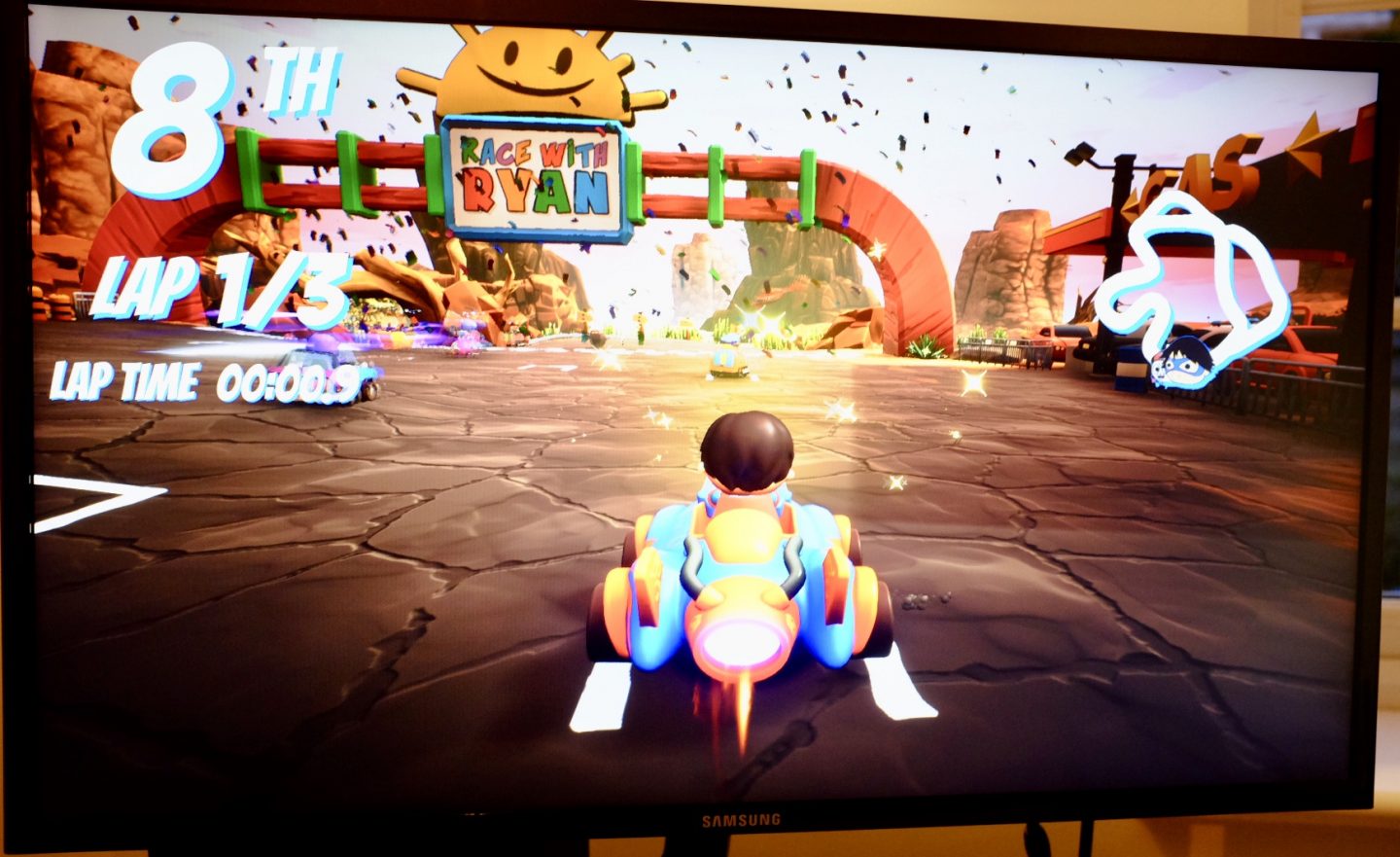 The game itself is great for kids who are learning to game. My kids have had limited experience and it is learning a new skill; great for hand-eye co-ordination and learning about cause and effect.

The game is limited in that it is only racing, so my girls played but perhaps not as much as previous games we had been sent, due to it being the same thing. There is less variation, apart from tracks and characters but that will all depend on what type of games your little ones like.

I liked the way it teaches younger children how to play and the ease of simplifying the controls. Children can be put off quite easily if they can’t do it first time and this will allow them to play, get better and keep playing.

If I was buying Race With Ryan, I would go for the Road Trip Deluxe Edition, simply as it brings more fun, colourful tracks and characters to the game. It was fun to play, great to watch my younger daughter learn and fab for Ryan’s World fans!

Disclosure – we were provided with this game and compensated for our time, in exchange for an honest review. All thoughts and opinions are our own.