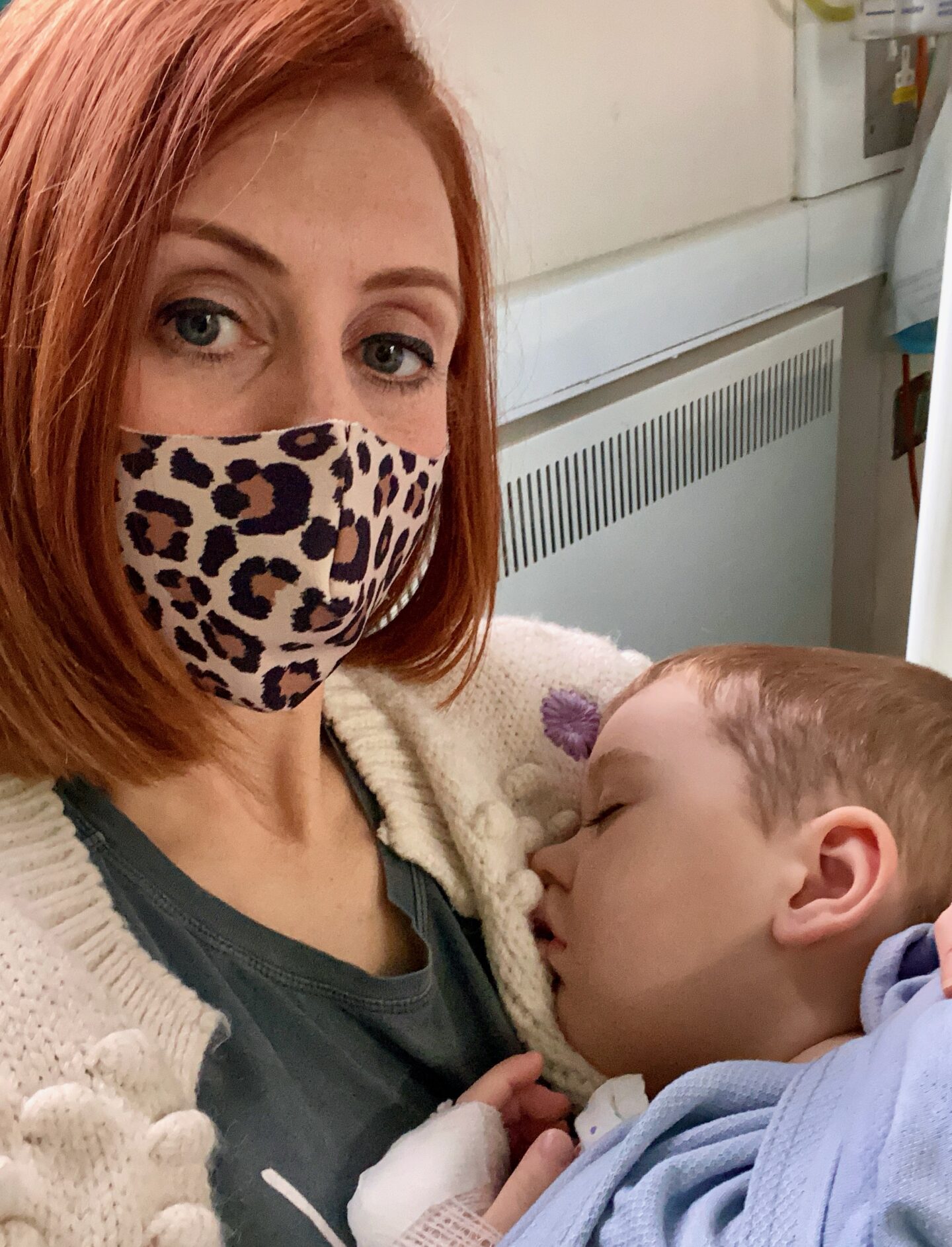 The title of this blog post looks complicated and yes it probably is and was. Surgery to remove an umbilical granuloma and a vitello-intestinal remnant. My little man finally, after almost 3 years of waiting was admitted to Birmingham Children’s Hospital for removal of his umbilical granuloma but it wasn’t the removal of just this as the post title suggests. I have written about this many times. How it was something he was born with and how we started to have a plan about what to do before the pandemic. Like many people, it was put on hold during the first stages of Covid, as was not classed as essential surgery. My little man waited from his initial consultation in February 2020 until now for it to happen.

Months and months of wearing plasters, leaking all over clothes and bedding and also bleeding.

You may have read we expected it to be all done in October but discovered potentially it was more complicated than just an umbilical granuloma removal. The consultant thought there was a potential connection to the bowel or bladder and the operation had to be abandoned. I was nervous we would have a long wait again but just before Christmas we saw a paediatric urologist from Birmingham Children’s Hospital who was confident he would be able to remove the granuloma and find out if connected internally. We were very surprised to get him booked in for 6th January; so soon after Christmas!

Surgery to Remove an Umbilical Granuloma and Vitello-Intestinal Remnant

The little man was admitted to the surgical day unit two days ago and there was a different feel immediately. We had to be there for 7.30am.

It was a busier unit; more children being admitted and more staff milling around. I had a feeling my little man may not be the first one in and I was right. This was definitely tougher as he was fasted from the night before. The same observations were carried out; height, weight, SATs, blood pressure and general questions for me. We spoke with the surgeon and the anaesthetist but the little lad on our left was first for surgery and we waited until around 10.30am; 3 hours after arrival.

The little man found this harder. He was tearful, tired and hungry and eventually fell asleep on me before his procedure.

The procedure for anaesthetising him was different this time. Previously, he was cannulated and distracted and then had the face mask. This was not the case this time. He was just going to have gas. I was asked once about sedating him a little before and I said no but this was mentioned again and I felt like I was being a bit difficult. I work in medical field myself but sometimes I hate medicalising everything! However, I got the impression they were advising me to calm him a bit, so he was given a sedative called Midazolam. It made him a bit floppy, relaxed and almost drunk-like. It was fine and easier for them to put the face mask on but I didn’t like it. I guess sometimes you just do as advised, even though you don’t want to really.

He was in surgery for around an hour and a half. I went off to Costa and caught up with my family and friends. I knew I needed to hold it together for him, so tried not to get upset. I was a lot calmer as he was put to sleep this time, having experienced it before. I also think I am weirdly strong sometimes when I need to be for others and I don’t have time to think.

I went back to the unit after and waited a while, to be told by one of the nurses we were going to have to stay overnight. I knew this was a strong possibility and had a stronger feeling when the surgery took a while. Still my heart sank, as I knew we would in for a fun night! I moved to  a ward and waited for him to come back.

The consultant came and found me first. As my husband and I had suspected there was a connection to his bowel. We had guessed this, as what leaked never smelt of urine but also never pleasant!

This is known as a Vitello-Intestinal Remnant (as I sit and read his discharge summary here).

I had a google and it complex but basically in fetal development the bowel and bladder are connected to the umbilicus but should separate. In my little man’s case this did not happen fully with the bowel and there was a connection. Hence the leaking.

This was excised after he had a laparoscopy (keyhole surgery) to diagnose it. He has a little wound above his belly button to the right, where this occurred. They put a little camera in to have a look. It was sealed up and his granuloma removed too.  The belly button had a dressing over it and he still had his little cannula in his hand, as would need 2 doses of IV antibiotics before going home. 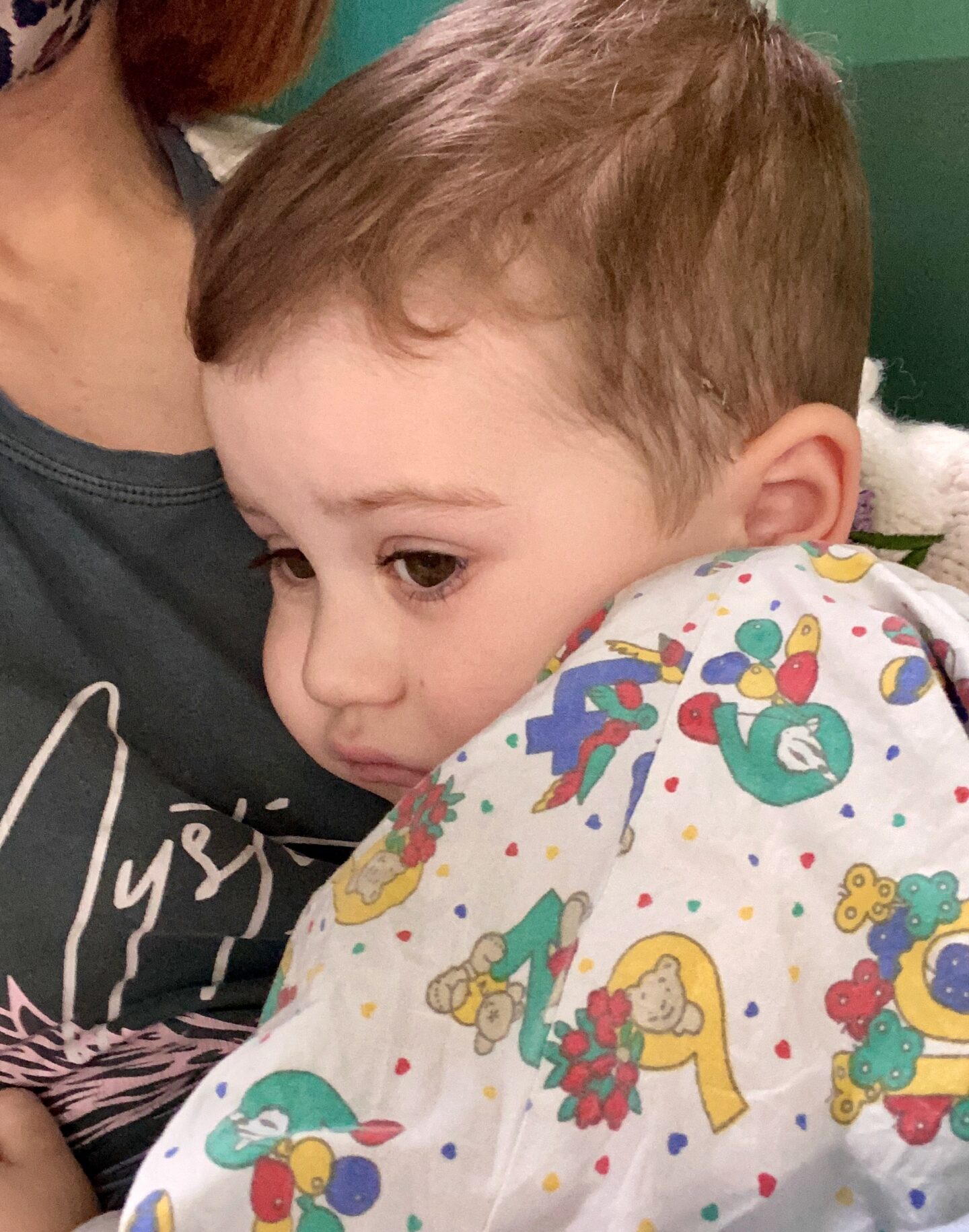 The rationale for staying it was the fear of an ileus post surgery. This is where the small bowel stops moving and there can be a build up of a food. The bowel seems to be quite a sensitive organ and being fiddled around during surgery can cause this. We would need to be looking for pain and vomiting when the little man started eating.

He was told to have free-fluids at first and if tolerated could move onto soft, sloppy diet. I felt like I was back on the wards again, as a dietitian.

He came back and slept and slept on me, only waking to have some water a few times. Finally after a while, he sat on the bed and watched his tablet. He could have some milk, so had a cup slowly, as he rested. I had a sick bowl nearby and I prayed he wasn’t going to puke the whole lot up. Luckily he didn’t!

He managed to have some Weetabix and yoghurt too and that stayed down too! My husband popped in with some supplies too. I’d packed a few overnight bits but not enough food. That was one of the hardest bits for me, as I eat so regularly! I could go off the ward but felt so bad leaving the little man. My husband only brought snacky bits so not having a proper meal all day was rough – I was hungry! I also felt bad eating in front of him, so tried not to.

Sleeping in the hospital was a whole new experience for me and hats off to any parents who have had long stays or regular stays with poorly children. I looked around me a lot and saw children and families with a lot to deal with and tried to just frame myself and get on with it.

There was a chair to sleep on but I ended up top and tailing and sleeping next to the little man in his bed. Ear plugs and an eye mask helped but it was so noisy! Machines, patients groaning, children screaming, bins slamming, staff chatting. It was never ending. I did sleep but barely anything.  The little man luckily slept well. 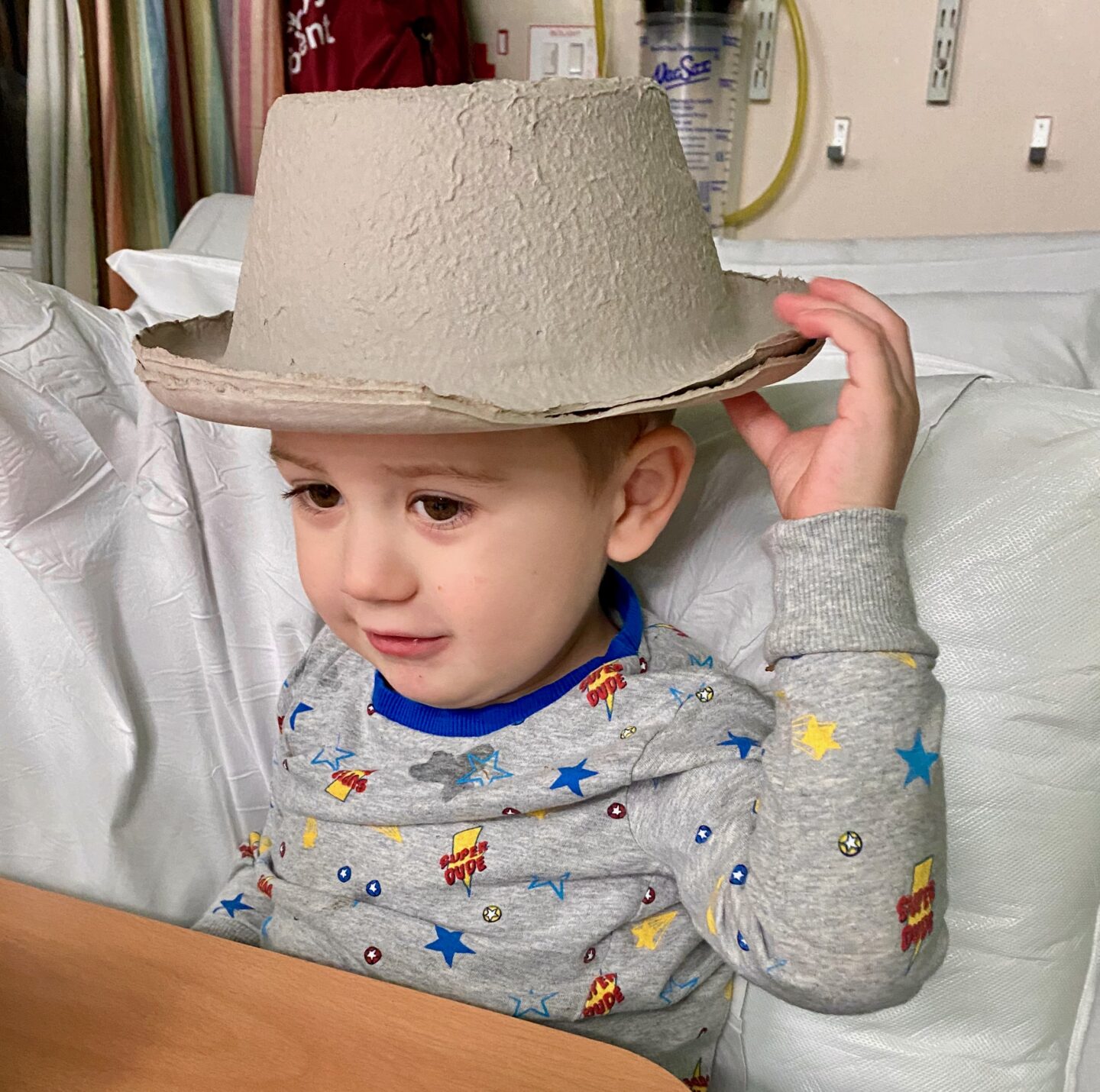 The next morning I was in for a bit of a surprise when the doctors came around and said we needed to stay another night. The combination of the whole experience, barely any sleep and not much breakfast was just overwhelming. My face must have said it all. I cried and said no. They were sympathetic and said we could go home that day. I had the impression from the nursing team, they were being cautious.

Our only concern was his bowels needed to open and hadn’t. They tried a suppository which they could not even get it. Again, this was something I wasn’t keen on but I went along with it. Thankfully after we came home, he went and all was good.

He had his dressing removed and his cannula out. He now can’t bath for a few days, as we have to keep it dry.

We could go home around lunchtime and I was so happy!

The little man was tired and chilled a lot when we got home. He didn’t eat much but after having a poop, cheered up a lot.

I’m not going to share a picture of his new belly button on here, as he has been very self-conscious of it and not been too sure. We have tried to get him to have a look in the mirror and he’s not keen, so will keep private for now.

I’m just so relieved it is all over with and sorted for him. Starting school. Swimming. Just sleeping without a mess. It will make life easier for him and us all!

Thank you for reading and to anyone who has messaged about him. Always appreciated!