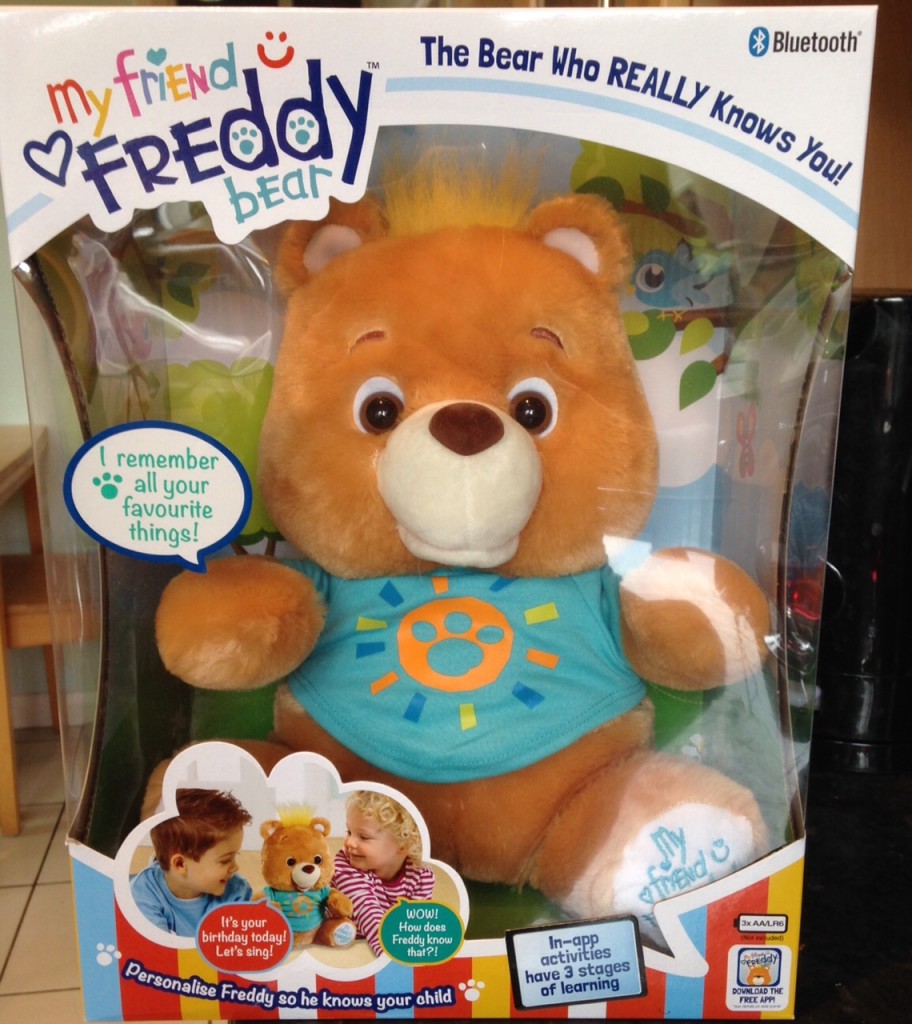 AD – One of the highlights of going around the brands at BritMums live was having a look at My Friend Freddy Bear. My daughter is at a very interactive age and I knew she would love it. When I was asked to review one, I jumped at the chance.

More About My Friend Freddy Bear

My Friend Freddy Bear arrived and I had a very excited daughter, desperate to get inside the box. I thought he had a look of a Care Bear; very cute. He is very soft and my daughter was cuddling him like mad. 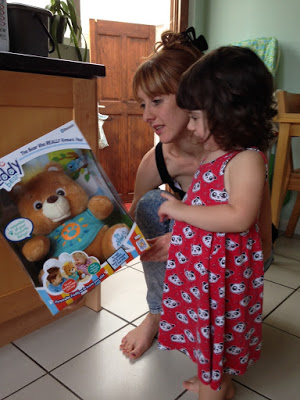 You need 3 AA batteries to get him talking and you just select the language via a switch on he battery holder. He laughs and giggles, is very loving and enjoys being tickled. He has a sensor if you tip him over and he will tell you to sit him back up. His mouth moves as he talks and bad Mummy enjoyed getting him to pretend to eat my finger (which my daughter loved!). These are some of the basic features without even reading any instructions! 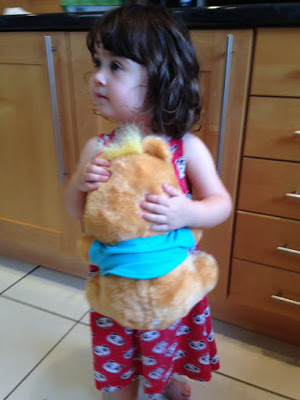 There is a free My Friend Freddy Bear app which can be downloaded on both Android and iOS smart devices. This is where the fun starts. You can add all the special details about your child including their name, birthday and their favourite games and food for example. Connect your app to Freddy using Bluetooth and hit the speak button. My daughter looked a little surprised to here her name come out of Freddy’s mouth but was fascinated.

There are also some fun interactive games to play on the app, including one where you try to flick some coloured fish from one bowl to another. Freddy Bear tells you what to do and helps you out with much encouragement. He also reads out stories, including The 3 Little Pigs, which my daughter enjoyed. These come in three levels so as your child gets older they are challenged further.

I was pleased to see there was a setting that ensured no bad words could be incorporated into Freddy’s repertoire. You can record messages to play back later. We are always trying to avoid swearing and wouldn’t want Freddy to say anything he shouldn’t.

My daughter loves to play with  Freddy Bear and he has gone down a storm. She likes tickling and cuddling him. I think as she gets older some of the games on the app she will be able to play more as her understanding and co-odination improves. She usually has a 30 second attention span but this held it for longer than that; a definite plus. 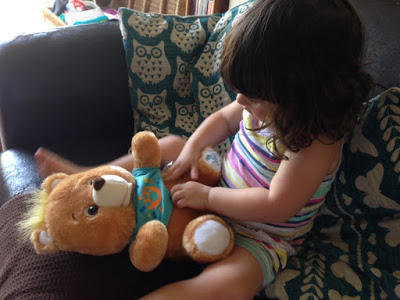 As parents we were a little unsure about his creepy voice at first as it is sounds older for such a young looking bear but this would not bother a young child in the slightest. My husband says he sounds like Lily Savage without the Scouse accent!

If Freddy Bear falls over he will not stop telling you he doesn’t like being upside down until you move him which is flipping annoying! Bear (like the pun?) this in mind if you are ever going on a long car journey! Also, it took us a while to figure out we needed to turn up the volume of our smart devices when Freddy was chatting via the programmed information. He sounded really quiet!

Overall and jesting aside, it is a fun buy, will keep you child occupied for ages and offers a real uniqueness and personal touch.

*I was offered My Friend Freddy Bear for free in exchange for a review. All thoughts and opinions are my own.