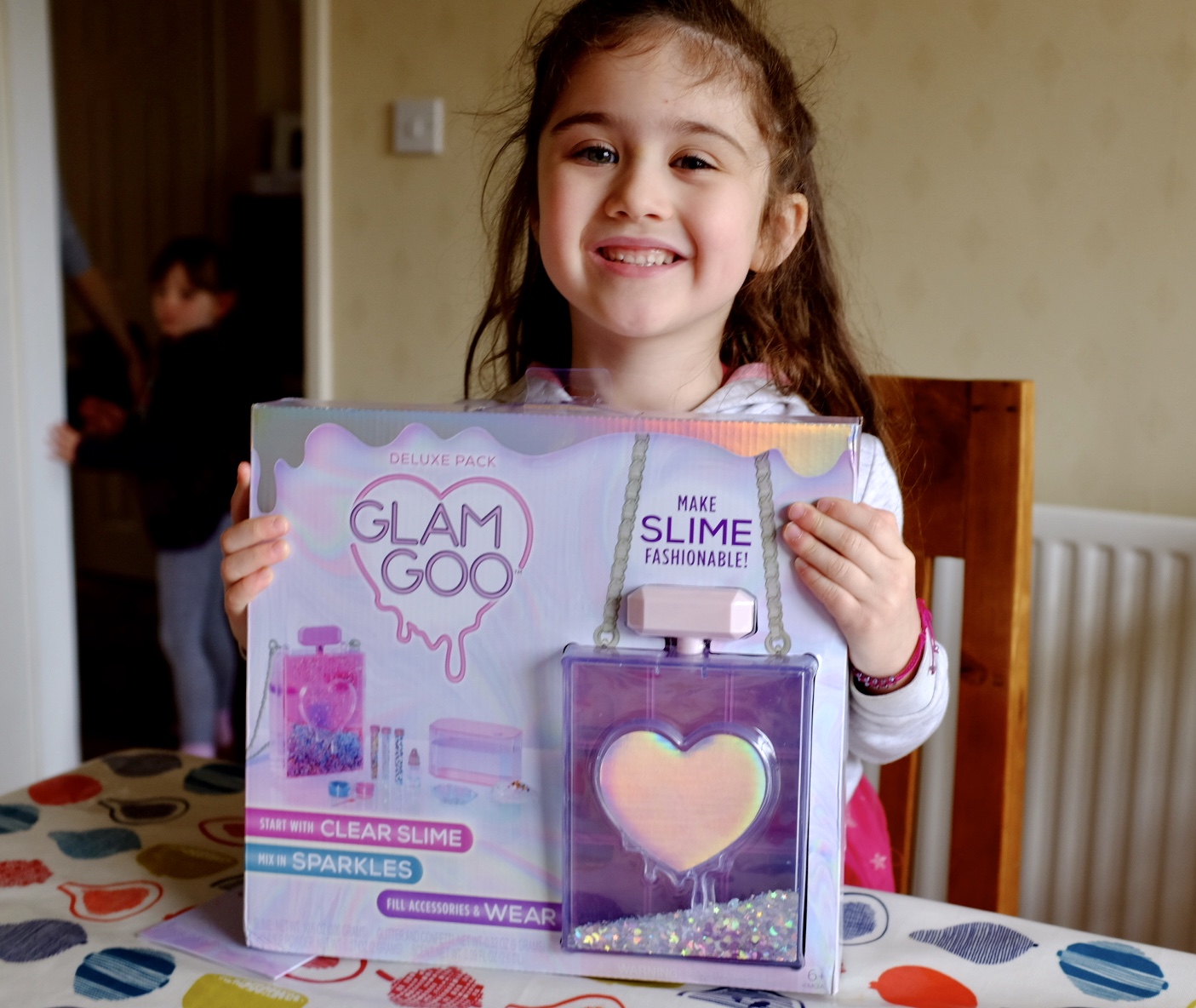 AD – Slime, slime and more slime! My gremlin is obsessed with it and I have to admit it’s pretty fun as well. She loves making and designing slime and goes bonkers when we have any. We were offered the chance to review some Glam Goo Slime for a belated BFF Day, instead of Valentine’s Day!

I knew one of the grem’s mates would love joining in with her and we took one of the deluxe kits over to their house over half-term for some slime fun!

What is Glam Goo Slime?

Glam Goo is kind of what is sounds! You can decorate, customise and even wear your own slime. There is a different range of products but all come with the clear Glam Goo and you can then add in colour, glitter and even scent! 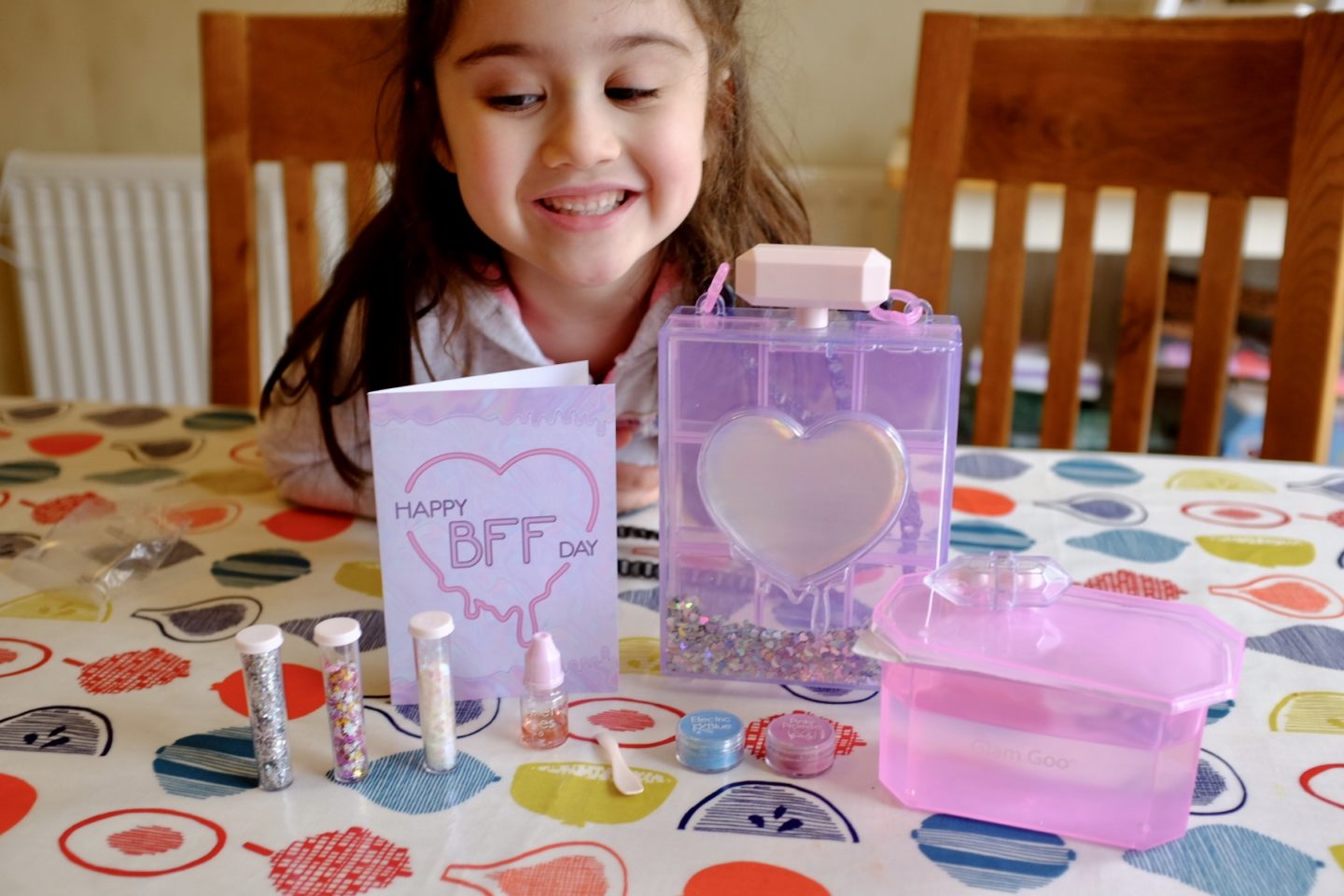 We were sent two of the Deluxe packs. These are available on Amazon, Argos and Smyth’s Toys. This RRPs £22.99 but does vary, so look around.

The gremlin took her slime over to one of her friends who she has known since she was born. I haven’t taken pictures of them together for privacy but you can see how much fun they had with the slime.

We opened one of the two packs sent and layed out all the kit. You can see we had a huge tub of slime, glitter, colouring, scent and the huge purse to store the prepared slime. There was even a BFF card for her mate! 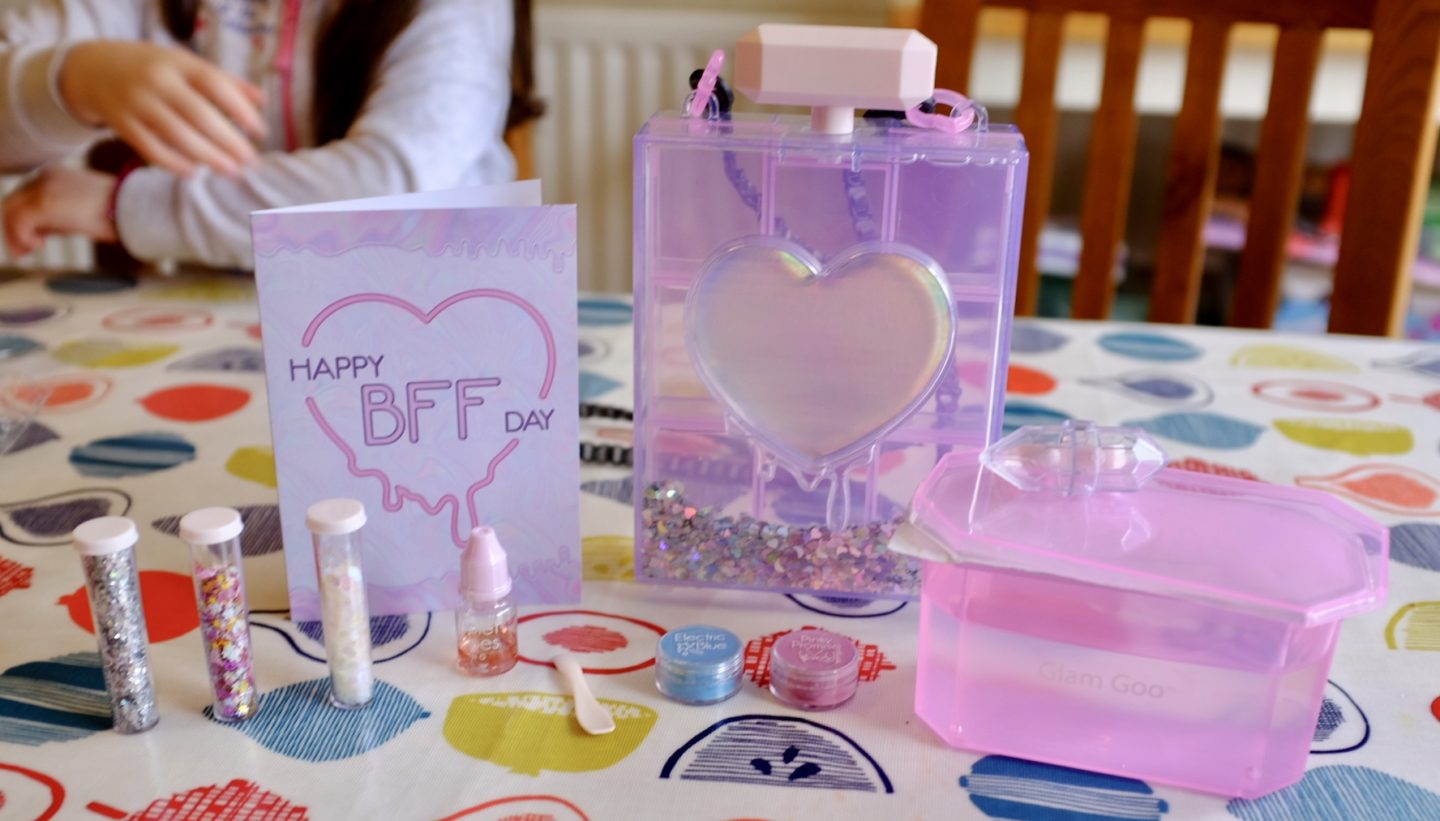 Some slime was dished out to my eldest, her mate and older sister and they could get designing! The slime is very gloopy when you first get it out but you have to work it in your hands for a while and it starts to change in consistency and become less sticky. 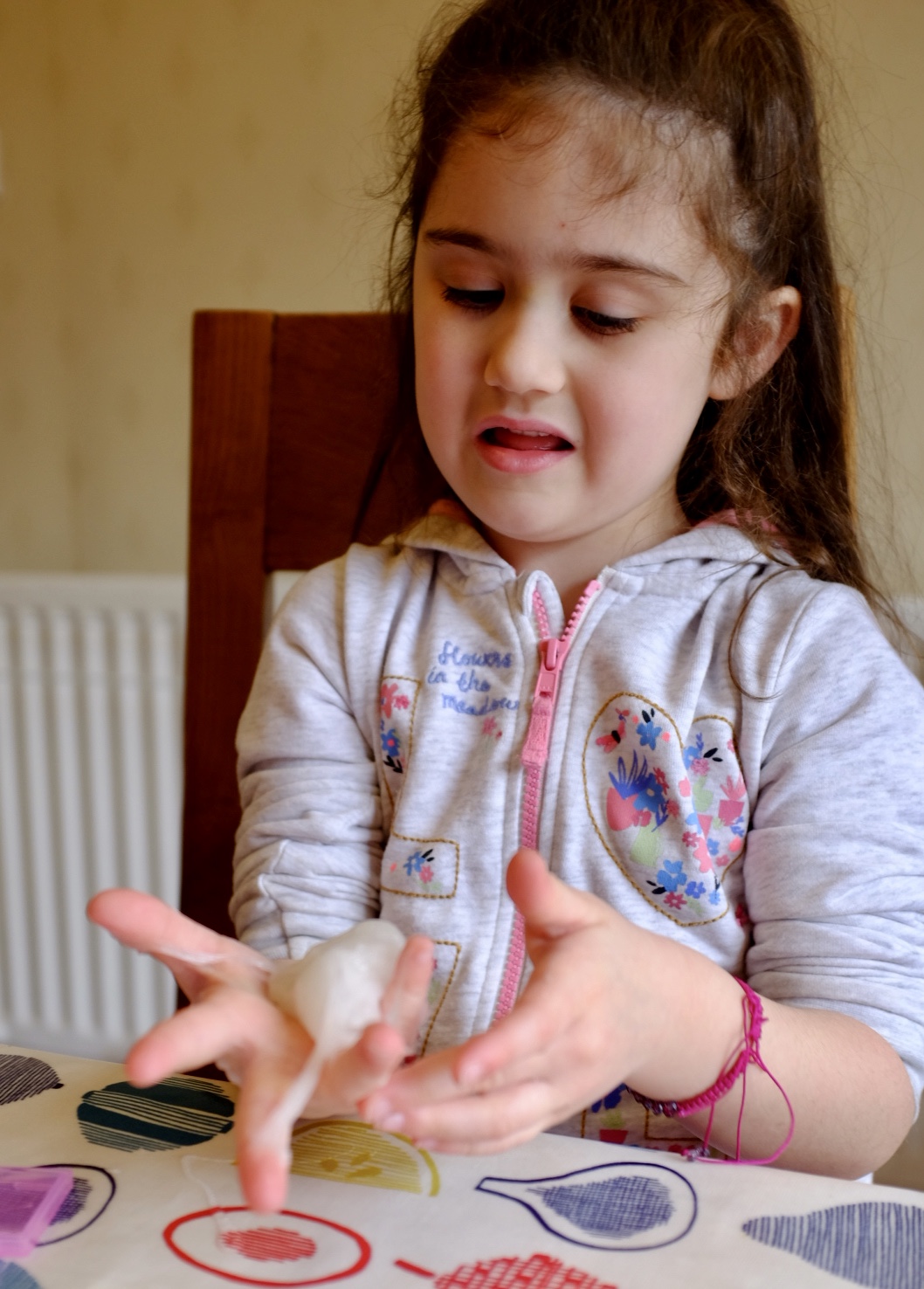 The girls set to work adding colour  and glitter,  even mixing colours! We had pink, blue, clear and purple slime, with sparkles added. 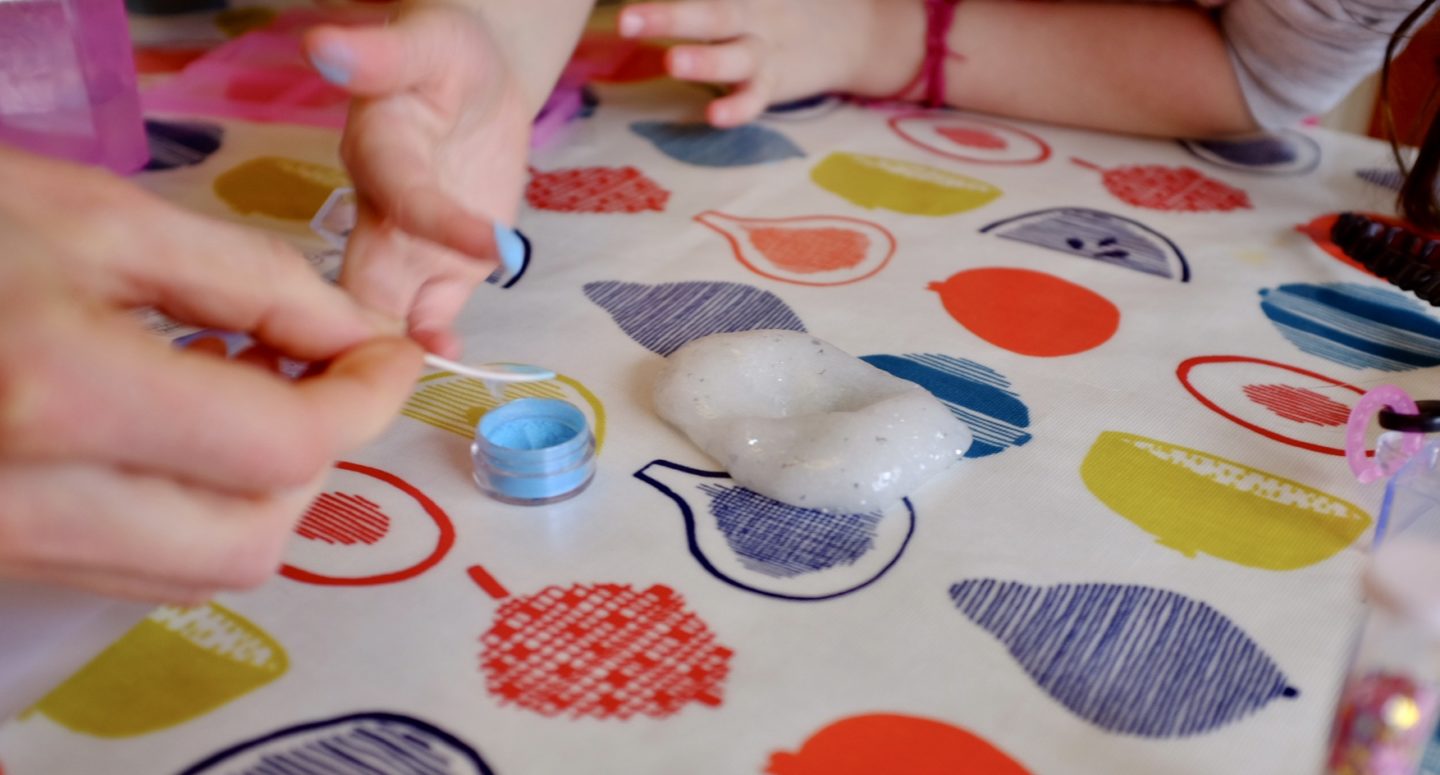 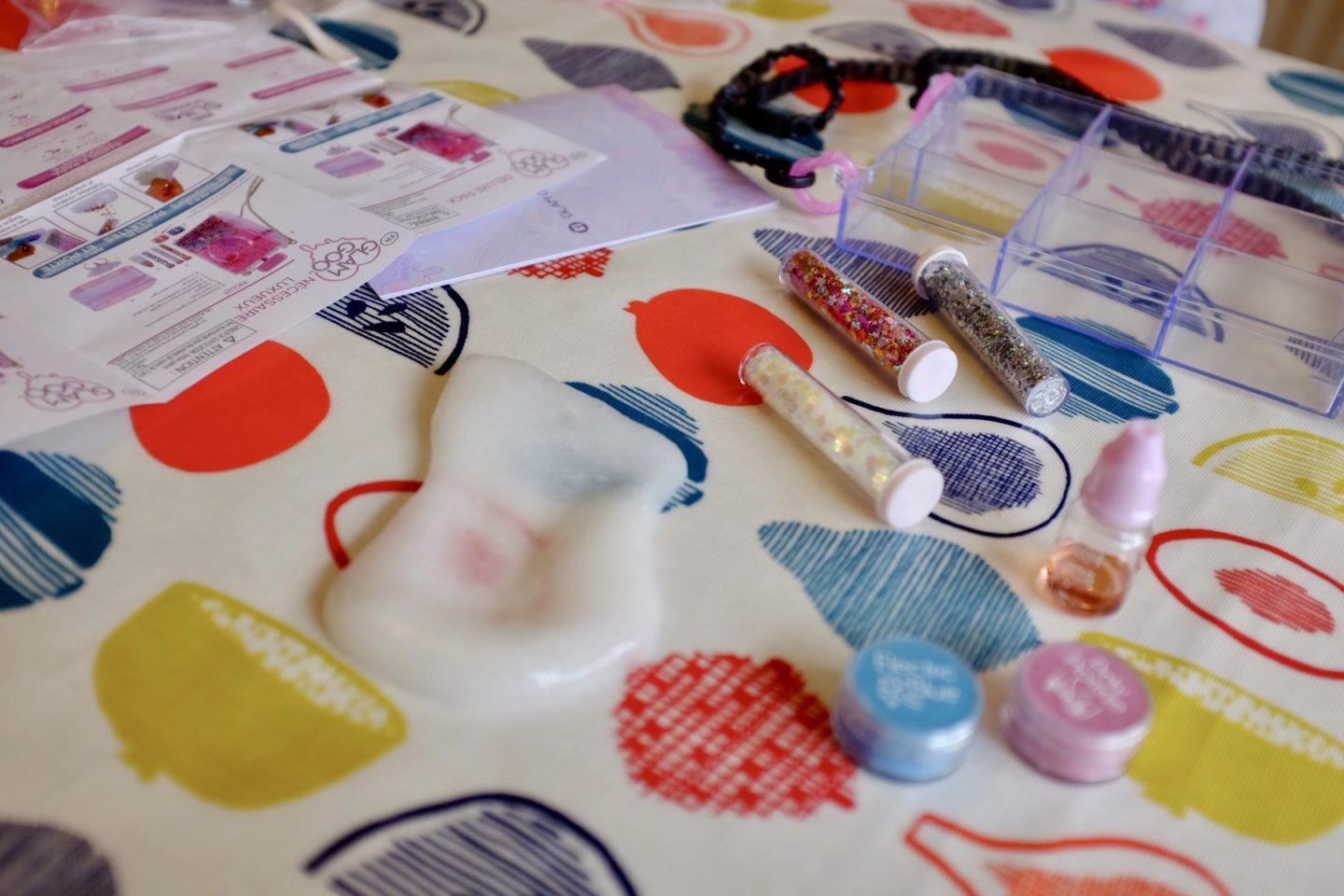 The girls had great fun and filled up the purse tray with different slimes for later. They added some to the  ring included too! 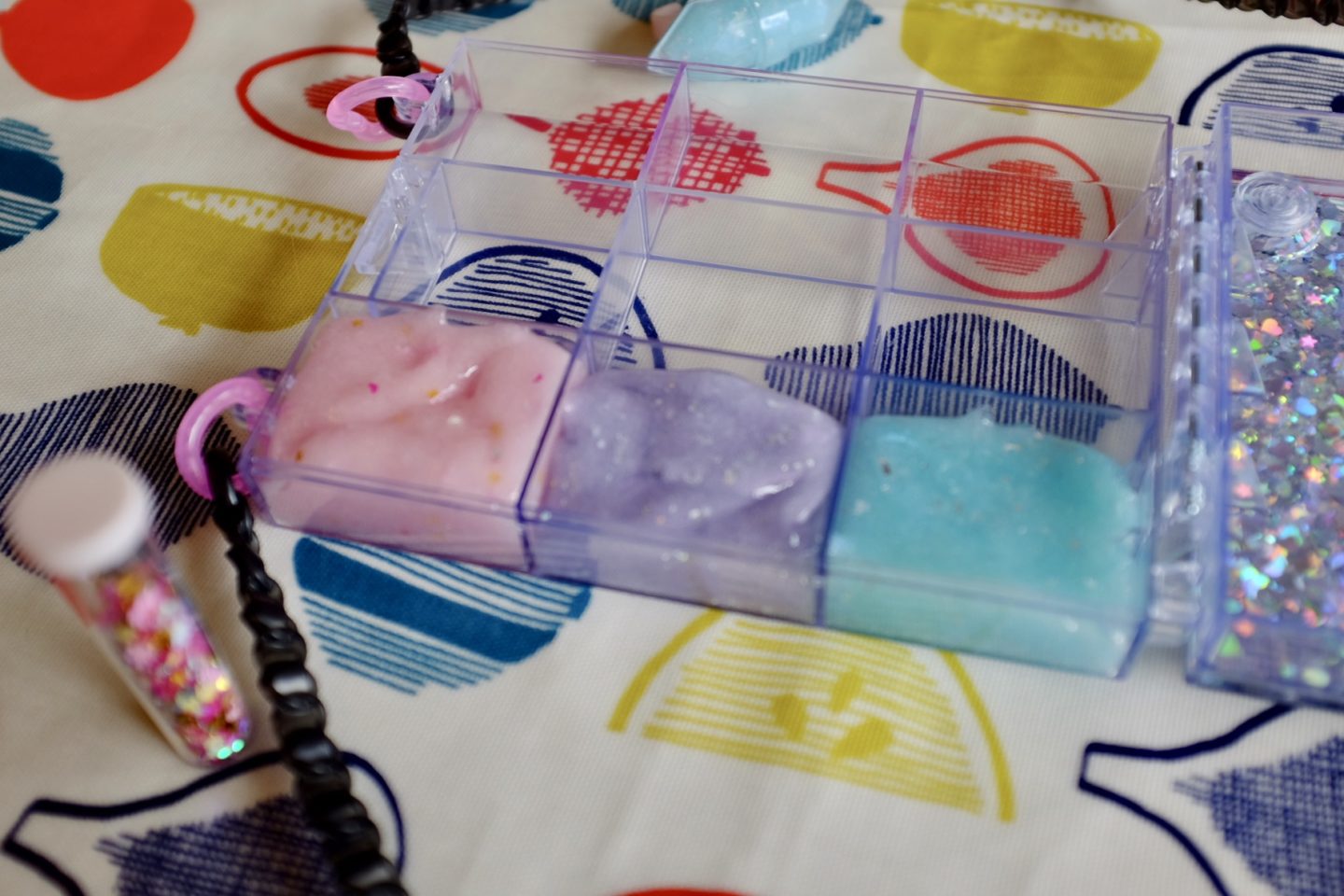 The girls really enjoyed themselves with the Glam Goo Slime and it kept them entertained for a while, one half term morning.

The girls did use up all the included slime from one Deluxe Kit in a one session but there were three of them and it would last longer for one person.

The kit didn’t seem to create too much mess but my mate had a wipe-clean tablecloth on her table to avoid any damage or mess. I’d recommend!

The slime itself was a good consistency once worked with and was easy to create the designs. It wasn’t too gloopy or sticky. I liked the creations and how you can store it in the purse to stop it from drying out and to play with again. The glitter and colour worked into the slime well to change the colour and consistencies. We didn’t have any problems. 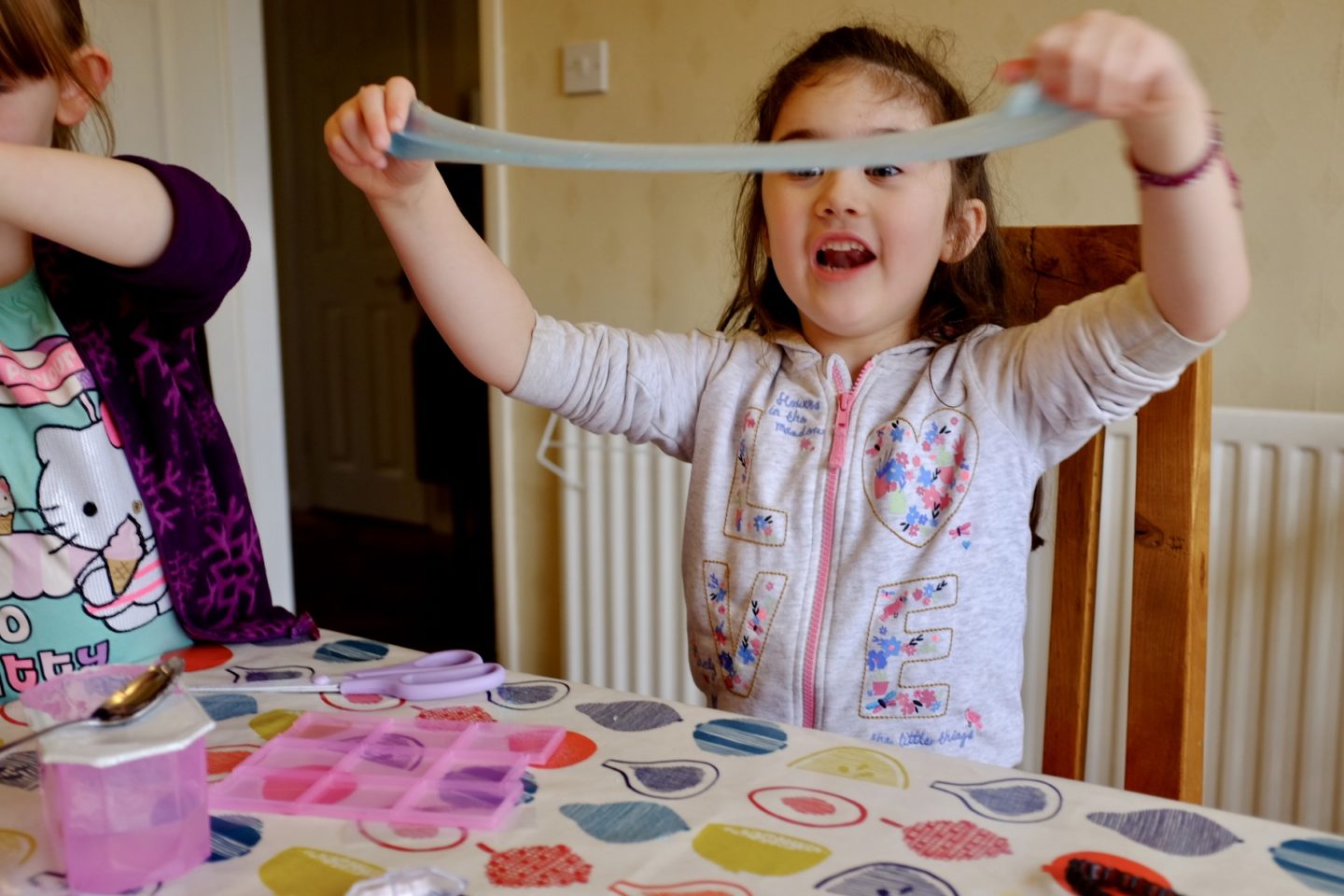 Price-wise I don’t think the kits are too bad but do shop around. I’m not sure it you can buy more slime when used, so bear that in mind and keep looking after the slime you make. Store it well and don’t leave lying around to dry out.

Overall the slime worked well, was great fun for the girls and I think was appreciated on BFF Day for us!

Would you like to WIN a Glam Goo Deluxe Slime kit?

Disclosure – we were sent this Glam Goo Slime in exchange for an honest review. All thoughts and opinions are our own.