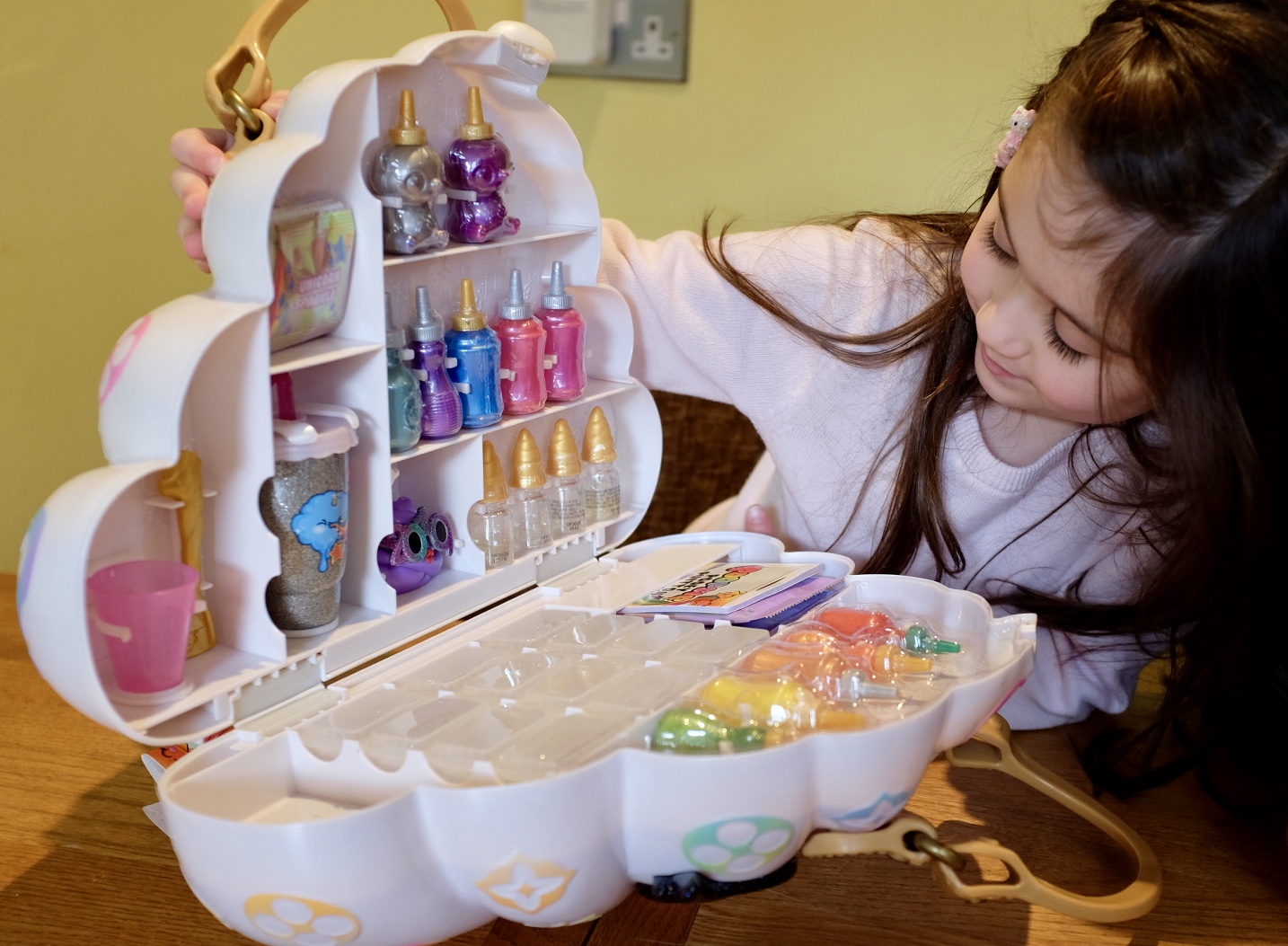 AD – The gremlin is completely obsessed with slime and we have had great fun in the past reviewing Poopsie Slime. When we were contacted to review the Poopsie Pooey Puitton, which just the name had me giggling. The gremlin has watched a couple of YouTube videos and knew exactly what it was. I was actually pretty keen to see too. I quite enjoy slime making with her, as it is something we can do together. 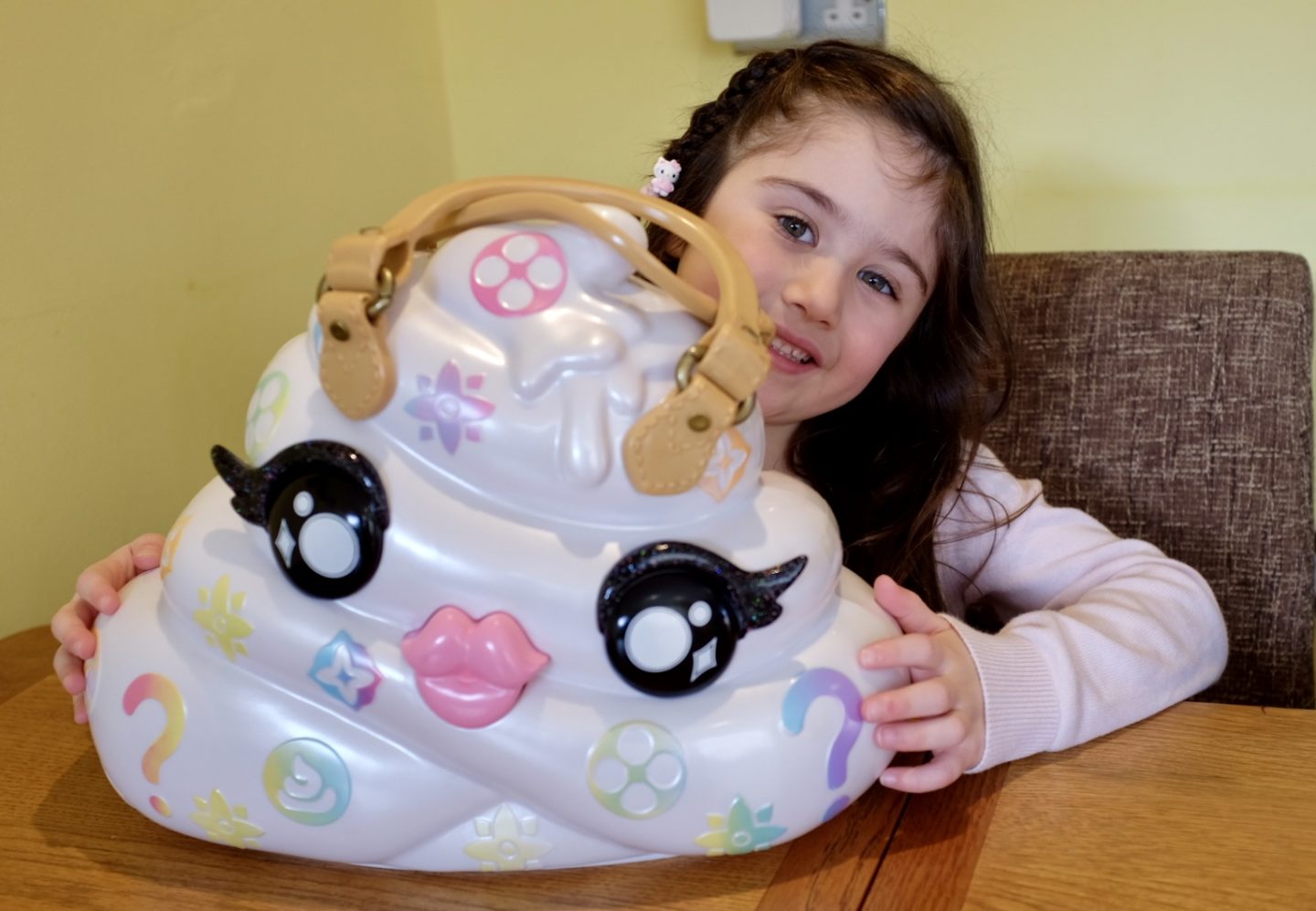 What is the Poopsie Pooey Puitton?

I love the name of this, very clever and when you see the Poopsie Pooey Puitton, all makes sense, if you like your fashion brands!

The product retails at £75.99 and is available in Smyths Toys, Argos and Amazon. It is recommended for children aged 3 and over and adults do need to supervise.

The product as described online is:

You can make a lot of slime from it.

The thing that surprised me most about this product was the size of it! It was a big product and I was dying to open it and have a look inside.

This however took a while! There wasn’t clear instructions on how to open to case. You have to peel all the tape off it and unscrew the little knob on the top clockwise. I went the wrong way and the knob came off! Luckily we managed to get it back on and open the case. A little bit of googling also helped with this. 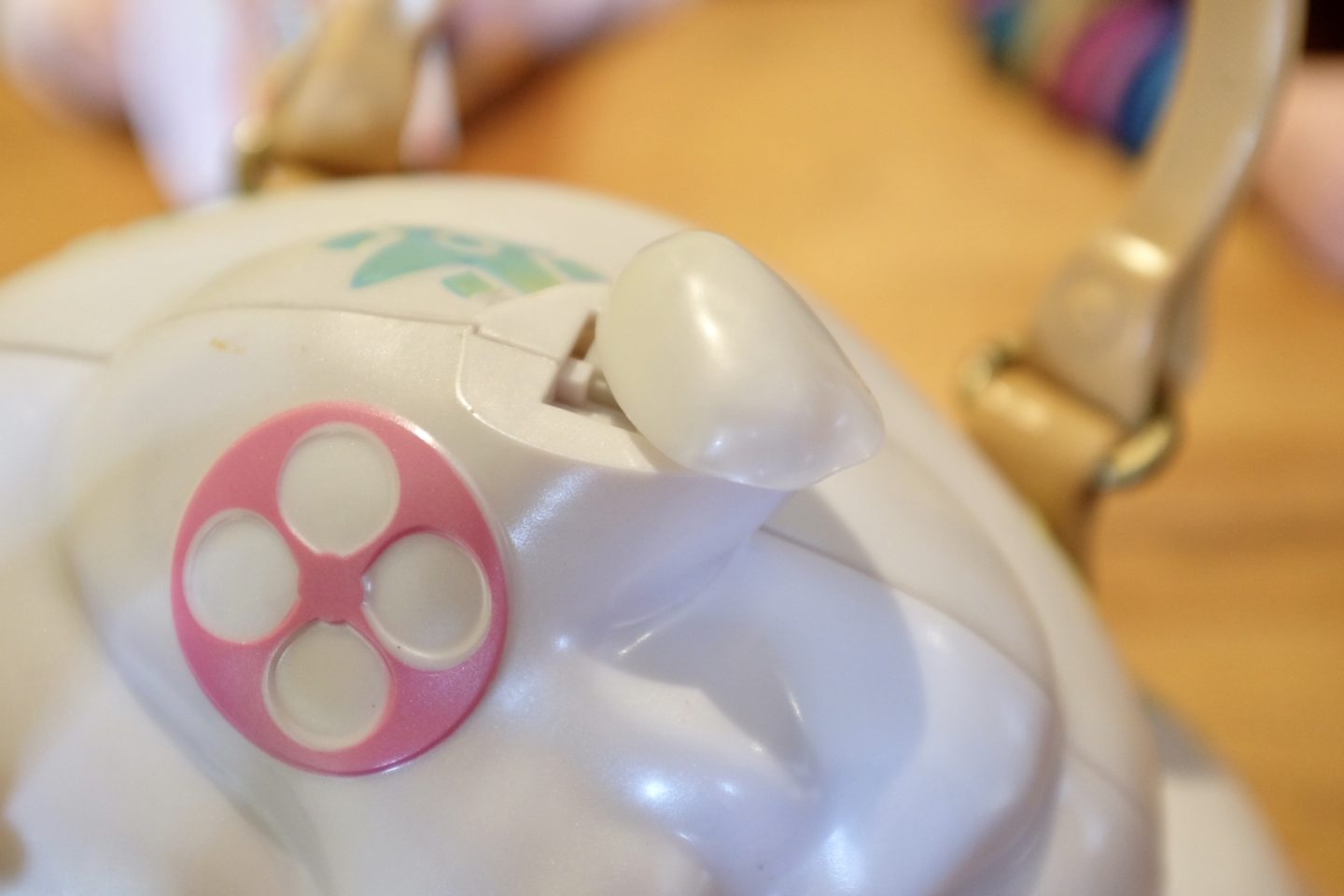 We weren’t disappointed! It’s like a giant make-up case with loads of make-up, except it’s stuff to make slime. There are little bottles, a poop character, mystery scents, a spoon! 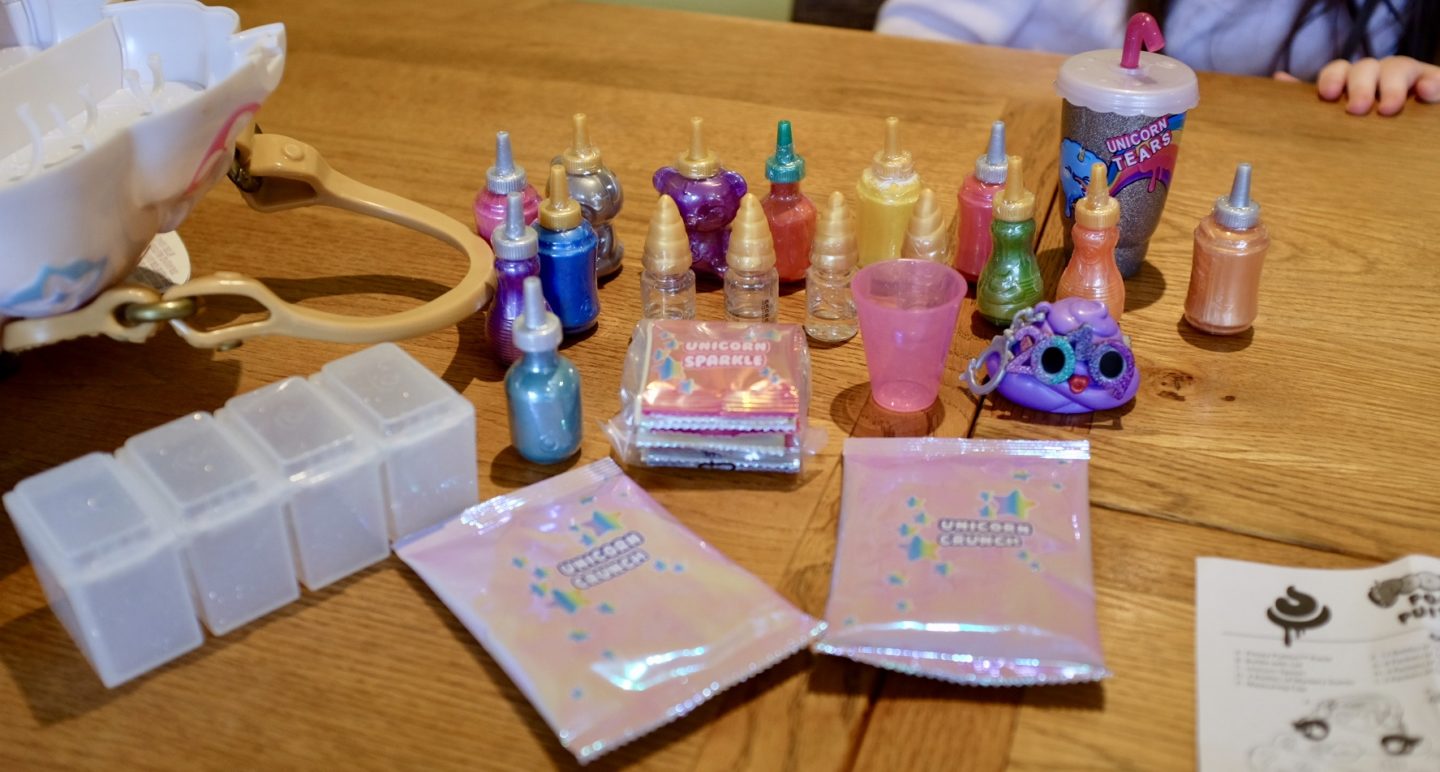 Now you would think after reviewing and making Poopsie Slime before, I would be an expert at it but no!  With the Poopsie Pooey Puitton, you make up the basic slime and then have the options to make it crunchy or sparkle for example, but the basic initial method is the same.

I will say the biggest thing when making the slime is to follow the instructions to the letter, from the included booklet!! I think we didn’t the first couple of times and failed a little. You have to add exactly 2 x 15ml of water into one of the small, coloured bottles which contains slime powder. You then add 5 drops of mystery scent and pour the mixture into the exclusive bottle, as you can see below. It then needs shaking for a minute and leaving to set for 15-20 minutes. 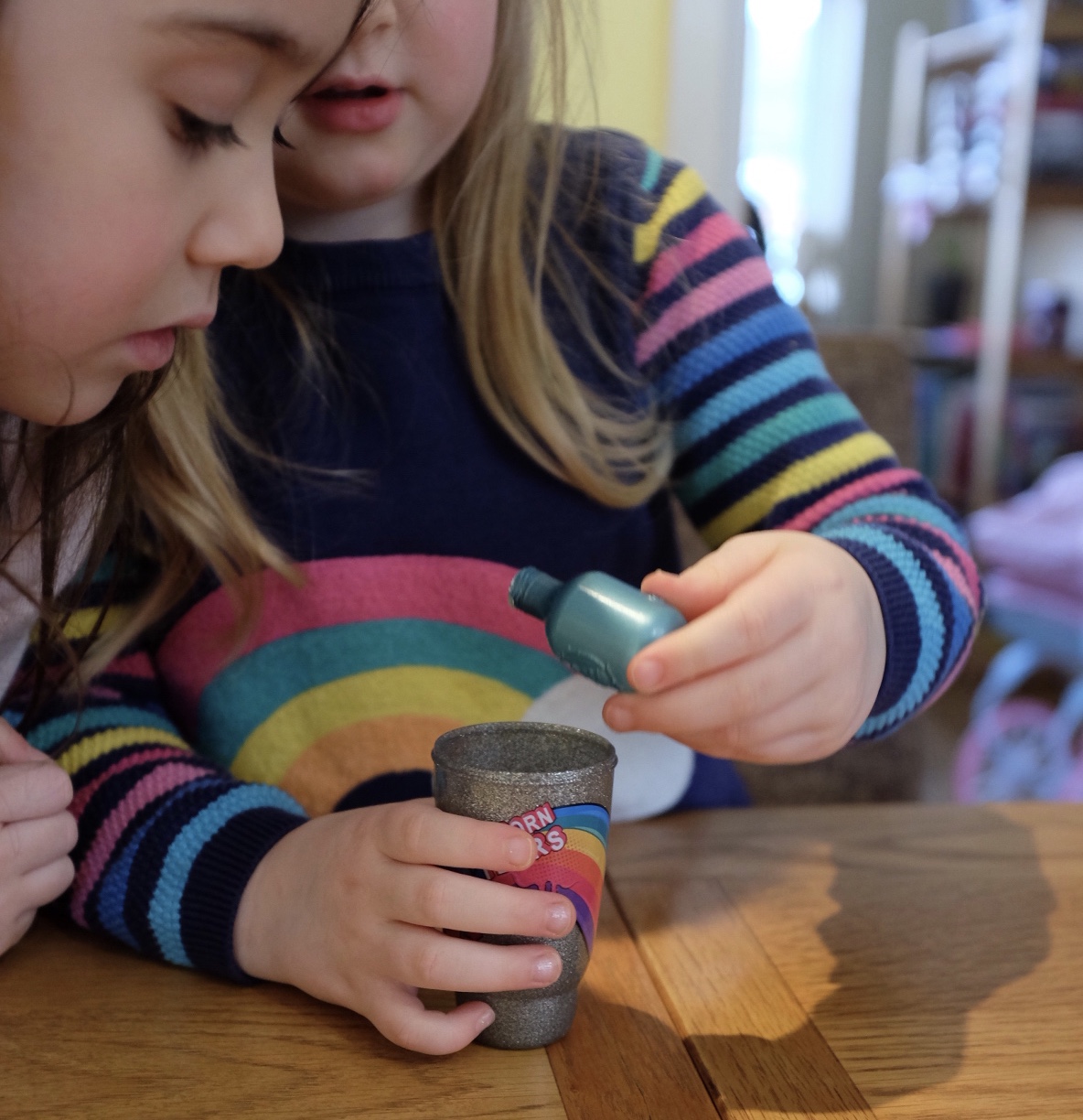 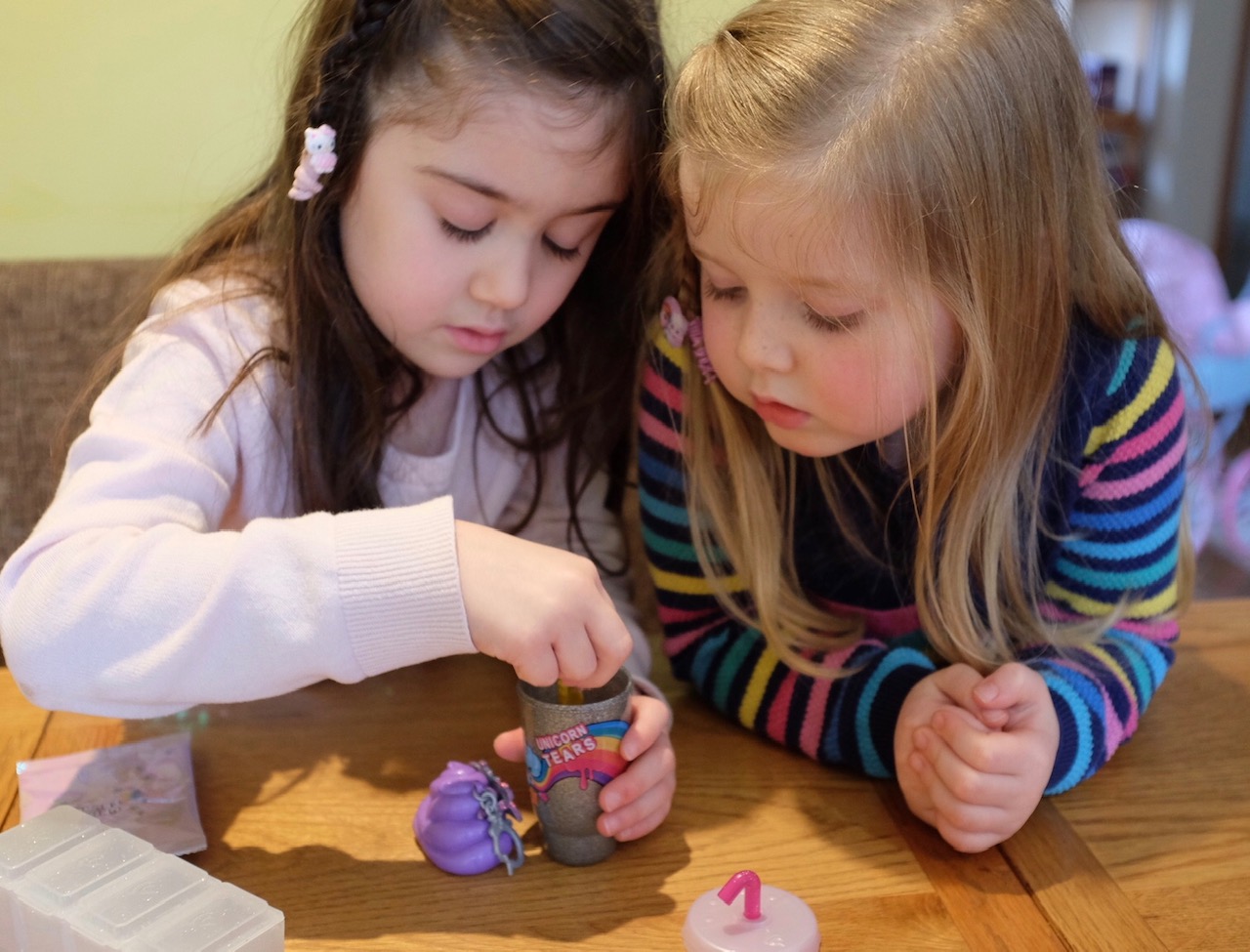 First time, we didn’t add the recommended 30ml of water to the slime food packets which look like little coloured bottles and I think we added too much water. We made it up, including adding 5 drops of mystery scent in the exclusive bottle, as you can see in the picture below. After an hour, the slime was still watery. I’m convinced we didn’t measure the 2 x 15ml correctly, using the little measuring cup provided. 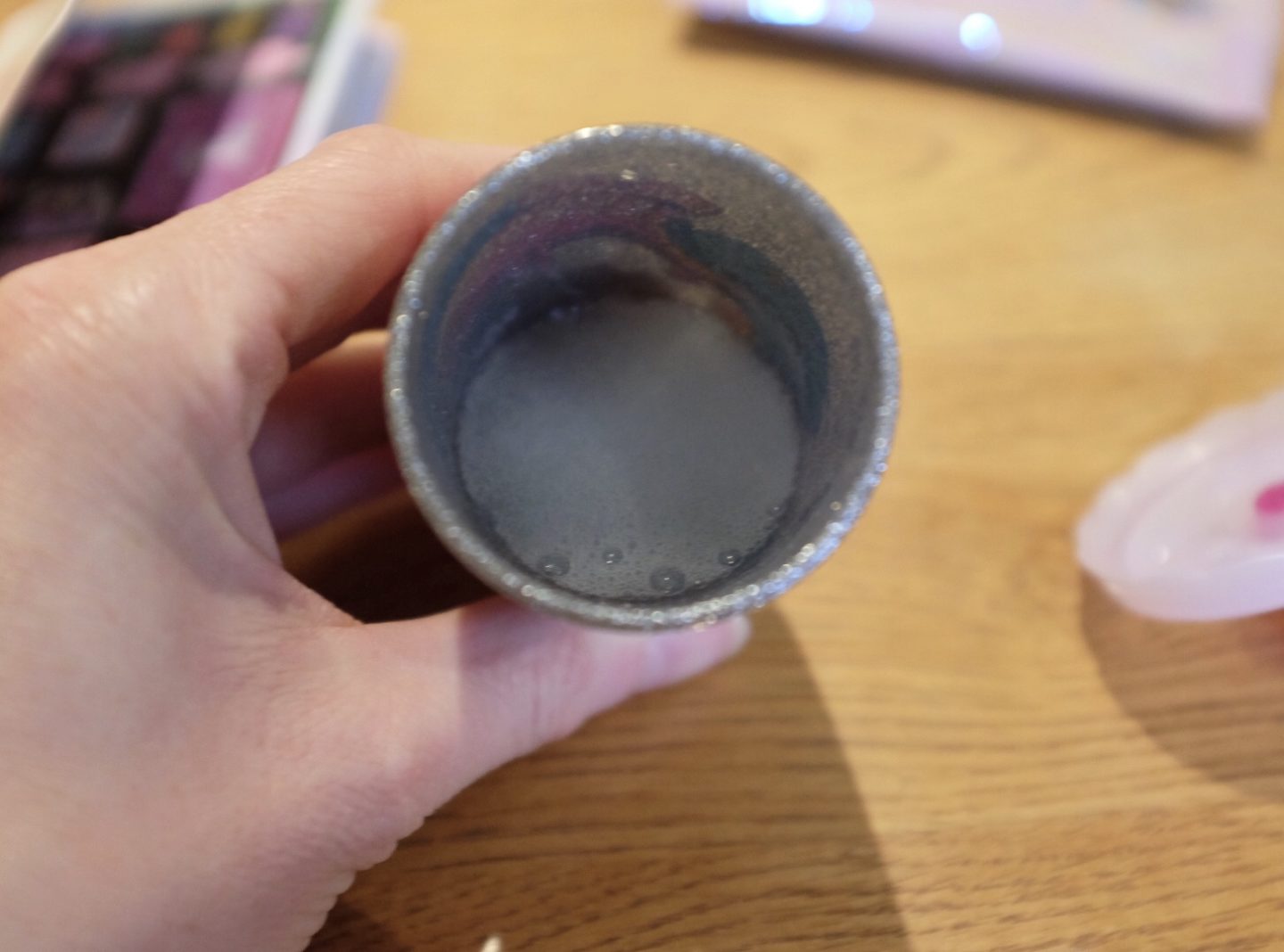 Second time I spilt a bit of the slime powder from the bottle (yes I know!!). Hubby estimated the amount of water and it did seem to set thank goodness. From my previous experience if it hasn’t set in 15-20 minutes, leave it a while longer and it does. 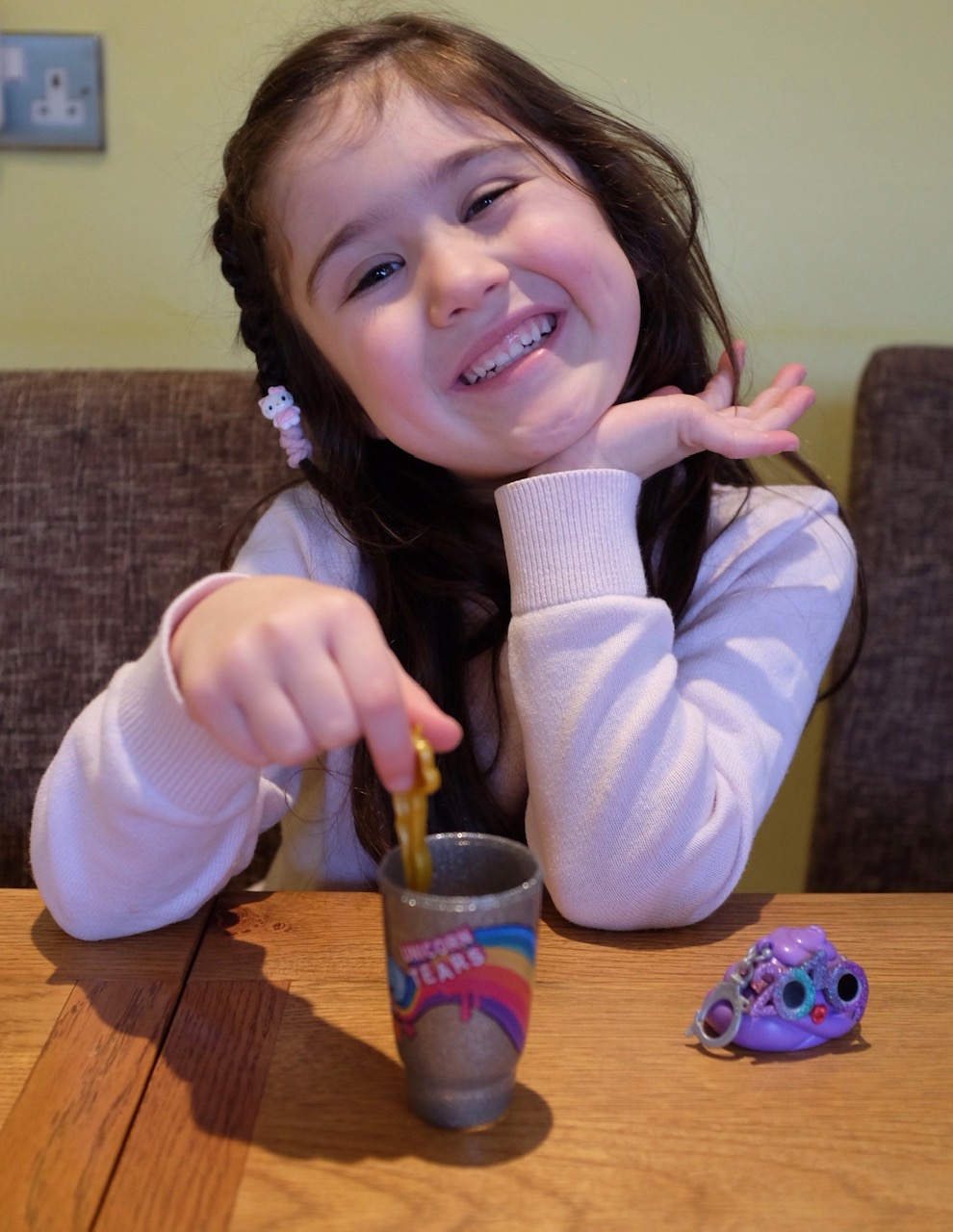 We decided to leave the slime for a while and have another go when the gremlin came home from school. We successfully made some slime from the previous day and it was ready to go. It still was quite sticky so I would say definitely don’t go overboard with water when you are making it. I liked the smell as well, as we had added the scent to it.

We decided to make some shimmer slime and opened one off the unicorn magic packs. I would definitely say don’t do this anywhere you want to keep clean!! It did go everywhere but a baby wipe cleaned it up easily. We then folded it into the slime, as instructed and it worked! 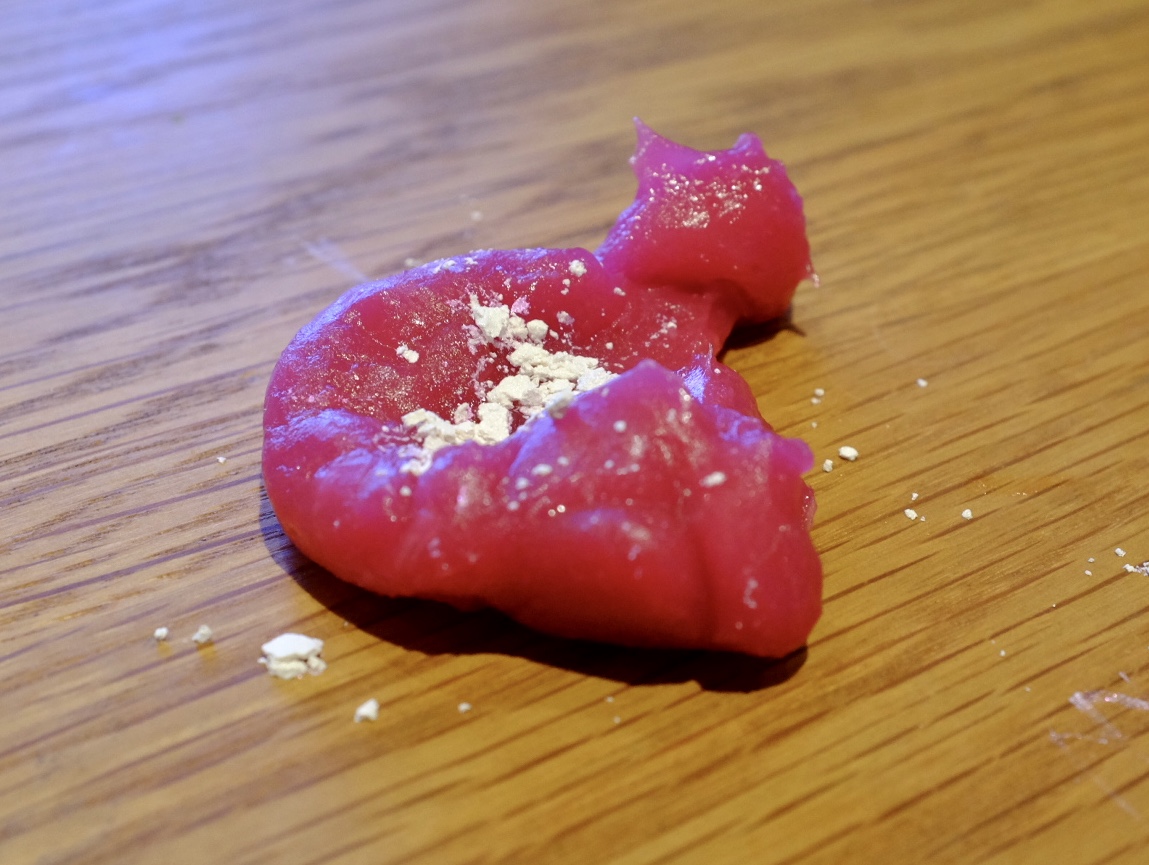 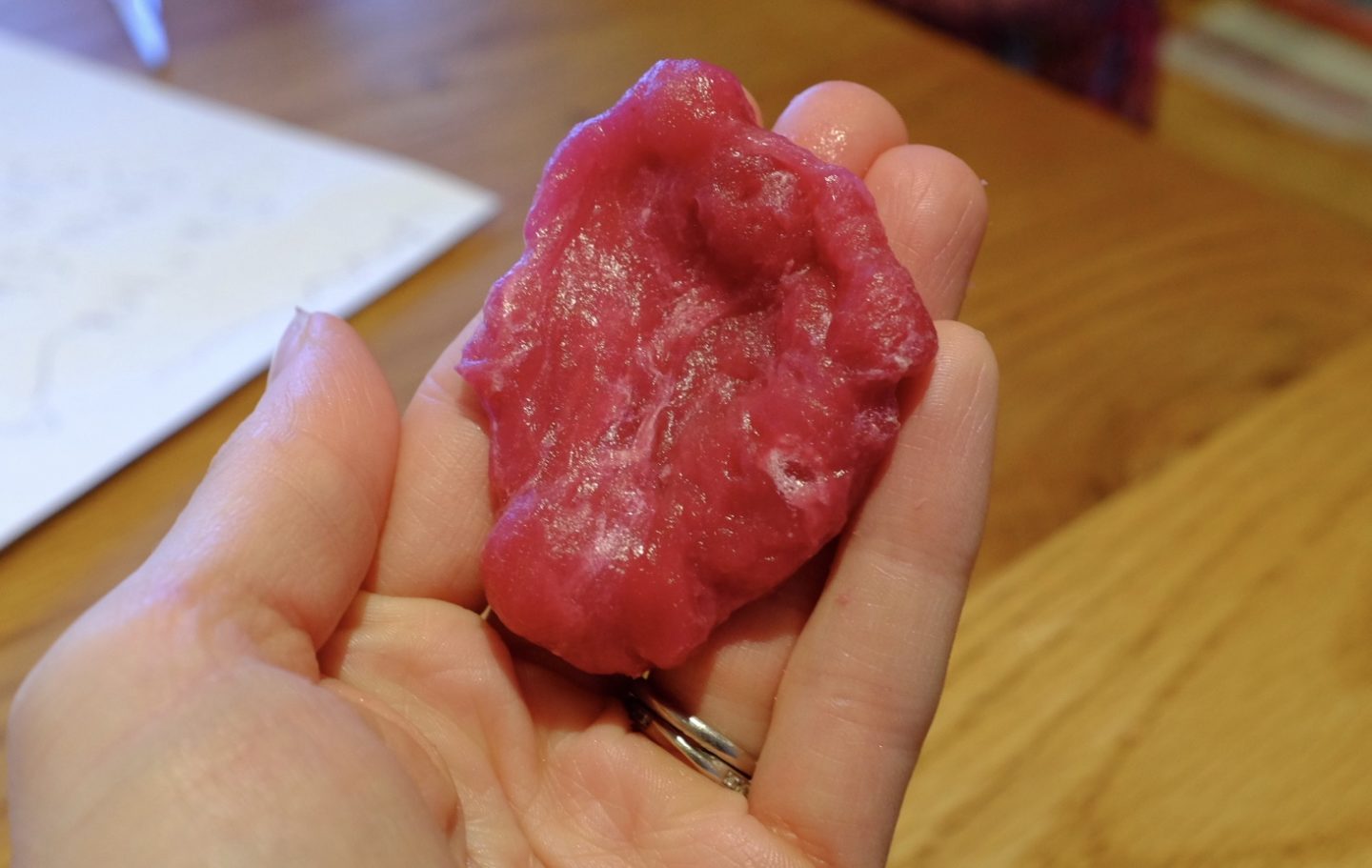 You can then take this a step further if you like and the gremlin decided she wanted to make crunchy slime. We opened the pack and added some of the white balls to the shimmer slime and folded them in. My eldest loved the texture and it was pretty cool. 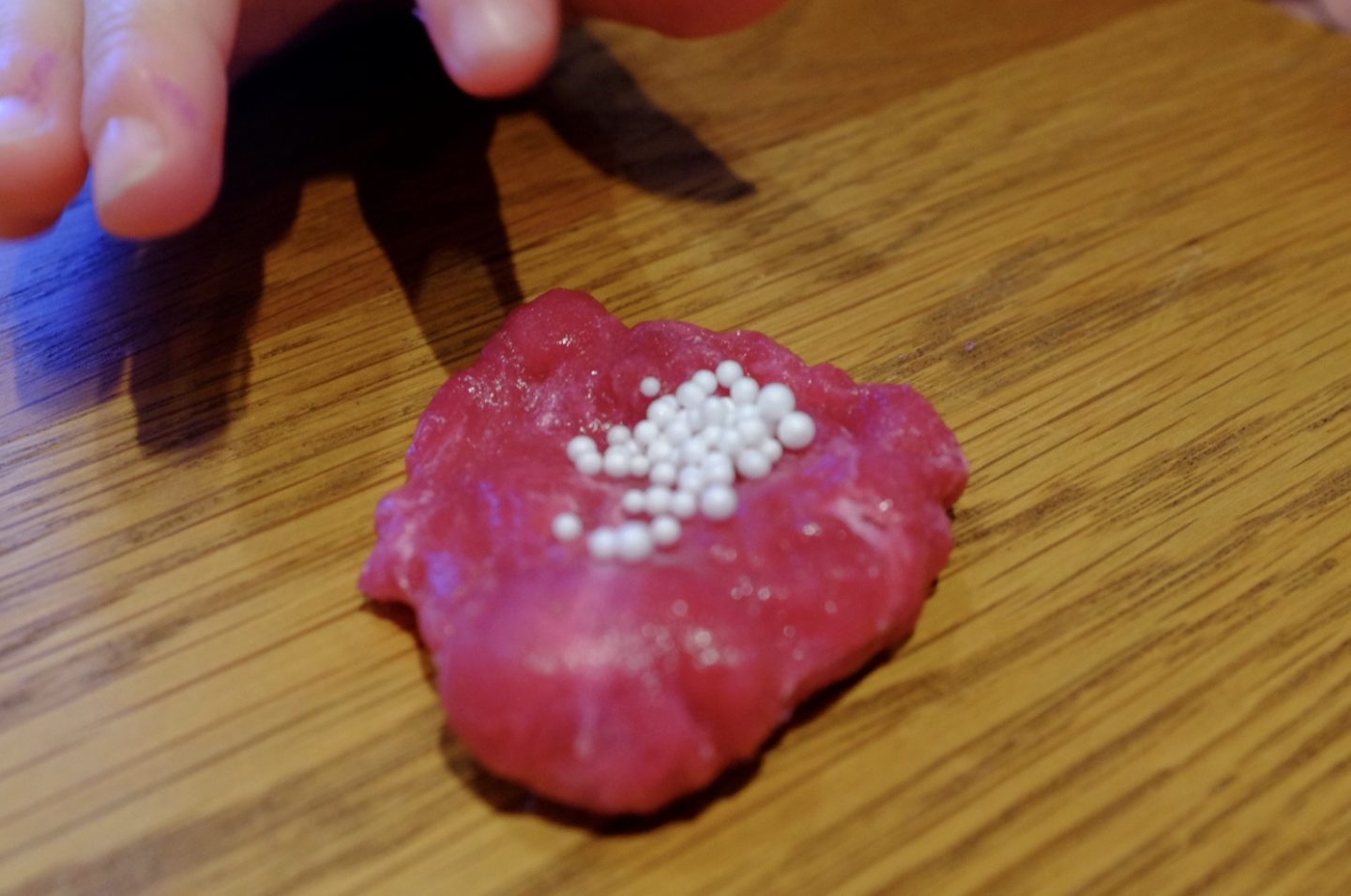 We then decided to definitely look after her slime and added it to one of the containers provided for another day and save her slime for when her friend came over, as you don’t want to do it all in one day!!

When I first saw the Poopsie Pooey Puitton Slime case I thought it looked so impressive! It is huge and we were all dying to open it. I love the colours and the Louis Vuitton style.

Apart from the initial struggles to get in, we were not disappointed, as it looked like a slime production heaven inside!! 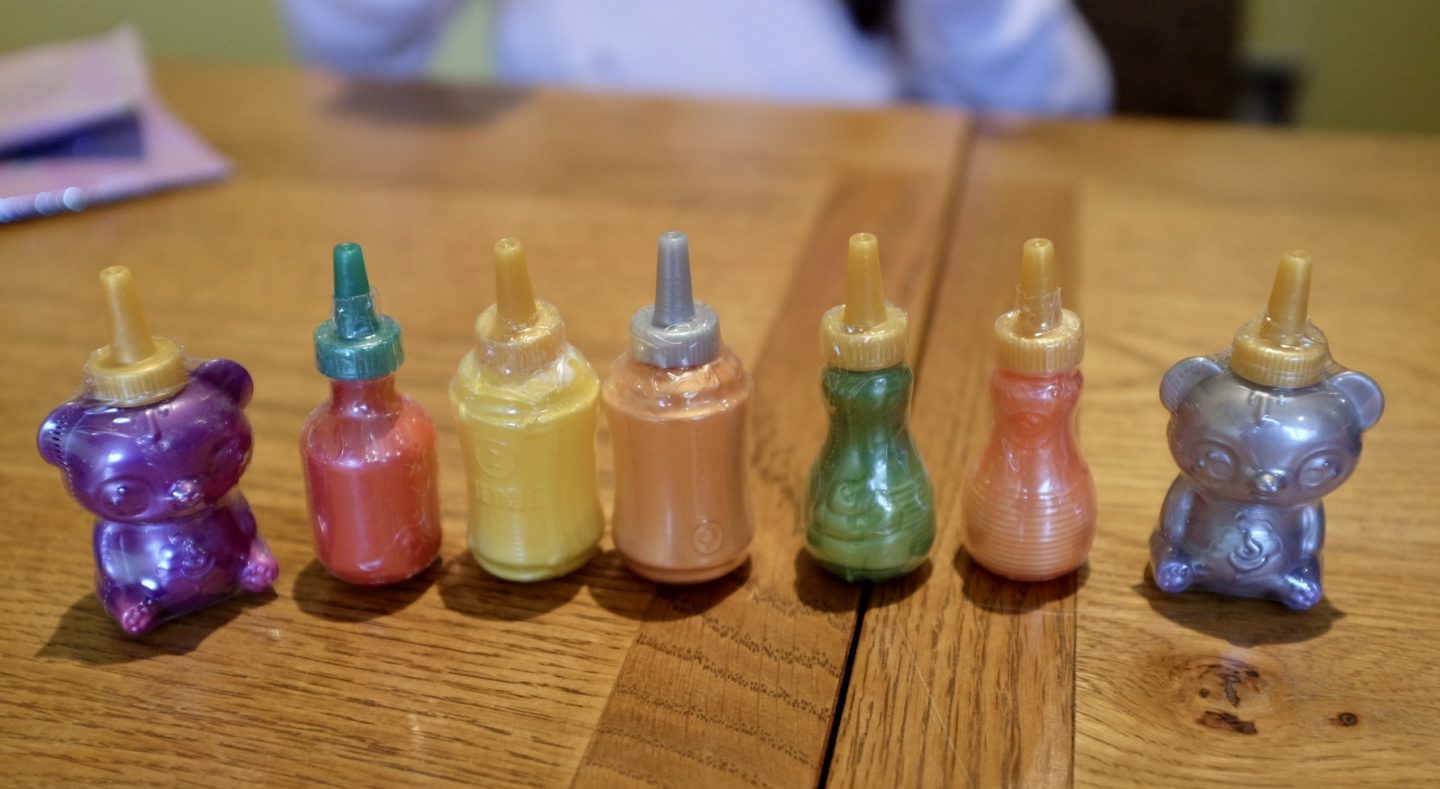 When you get the slime making right it is really good fun but if you make an errors with it, it either is too watery or gloopy and this can be disappointing. You also feel like you are wasting your slime powder bottles, as can’t make the shimmer, glitter or crunchy slime.

When it works though it is pretty cool and I love the provided storage containers to store and keep it fresh. You can make so many variations of slime in colour, texture and scent. 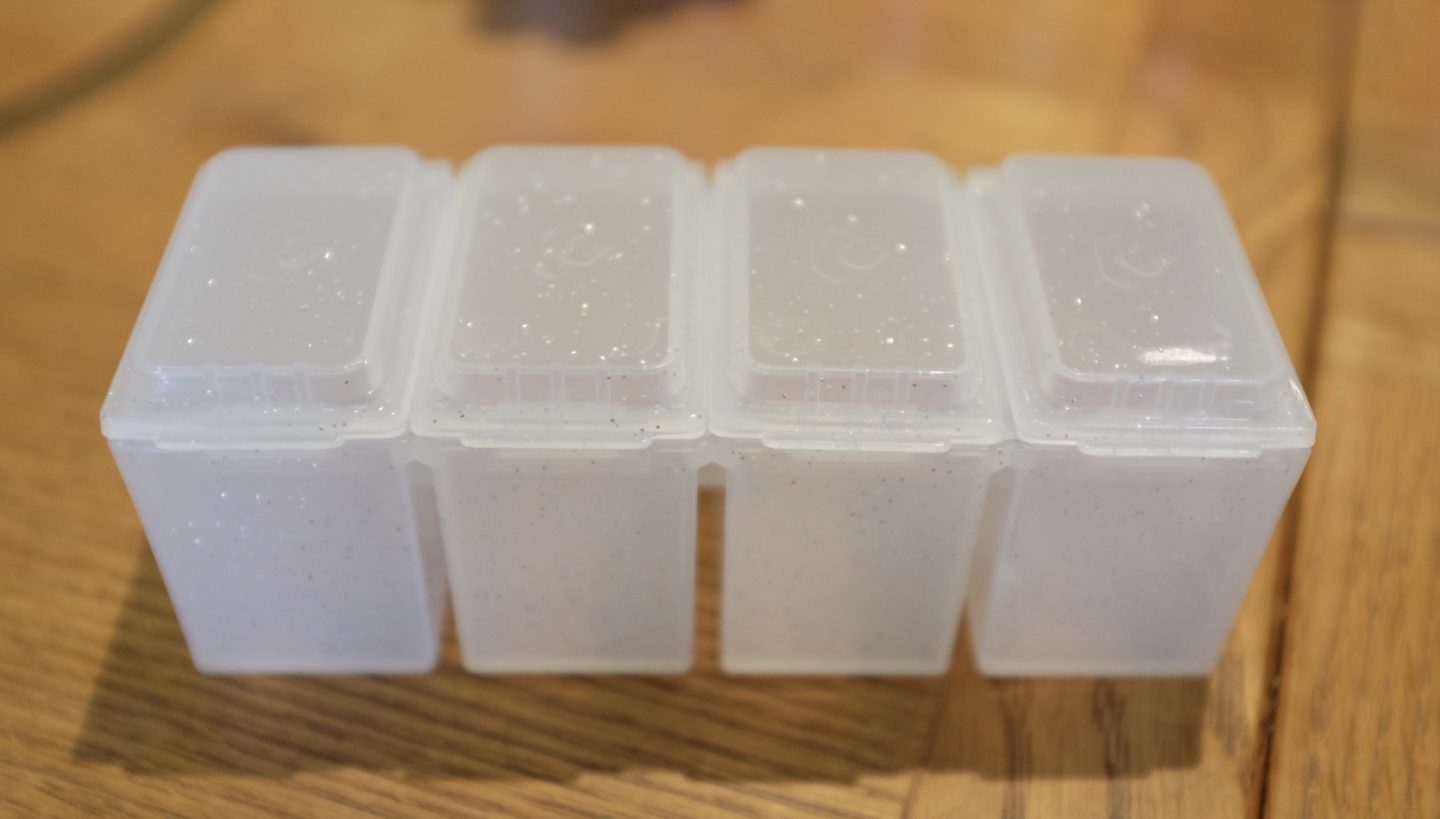 Price-wise the Poopsie Pooey Puitton is not cheap at all but shop around, as I have seen it cheaper than the RRP. It is still a big gift or purchase though. You get a lot of slime for your money though and the case is pretty impressive and you get the WOW factor. Have a read of any tips before you part with that cash!

Here are my top tips though:

– Read the instructions thoroughly and follow to the letter when making the slime. I would always add a little less water than too much to avoid the slime being to gloopy.

– Store it in the containers as you don’t want it to dry out and be wasted.

– It is a pricey toy, I’m not going to lie. I have seen it cheaper than the RRP all over, so shop around.

– Bear in mind you can’t use the case for anything else as it is set the hold the Poopsie Slime gear. I was hoping we could re-use for something else but likely no.

I’m not going to lie, the Poospie Pooey Puitton is pretty amazing and we did have fun with it in the end. For kids who love slime making, it is fun and a lovely activity to do with your child.

However, I have to say we were a little disappointed with our first attempts and it does seem the slime isn’t very forgiving if you make a mistake.

If you can get it right, using my tips, then it’s fab but if not it’s a little frustrating.

Definitely weigh all this up if you are going to buy and I hope this review has helped.