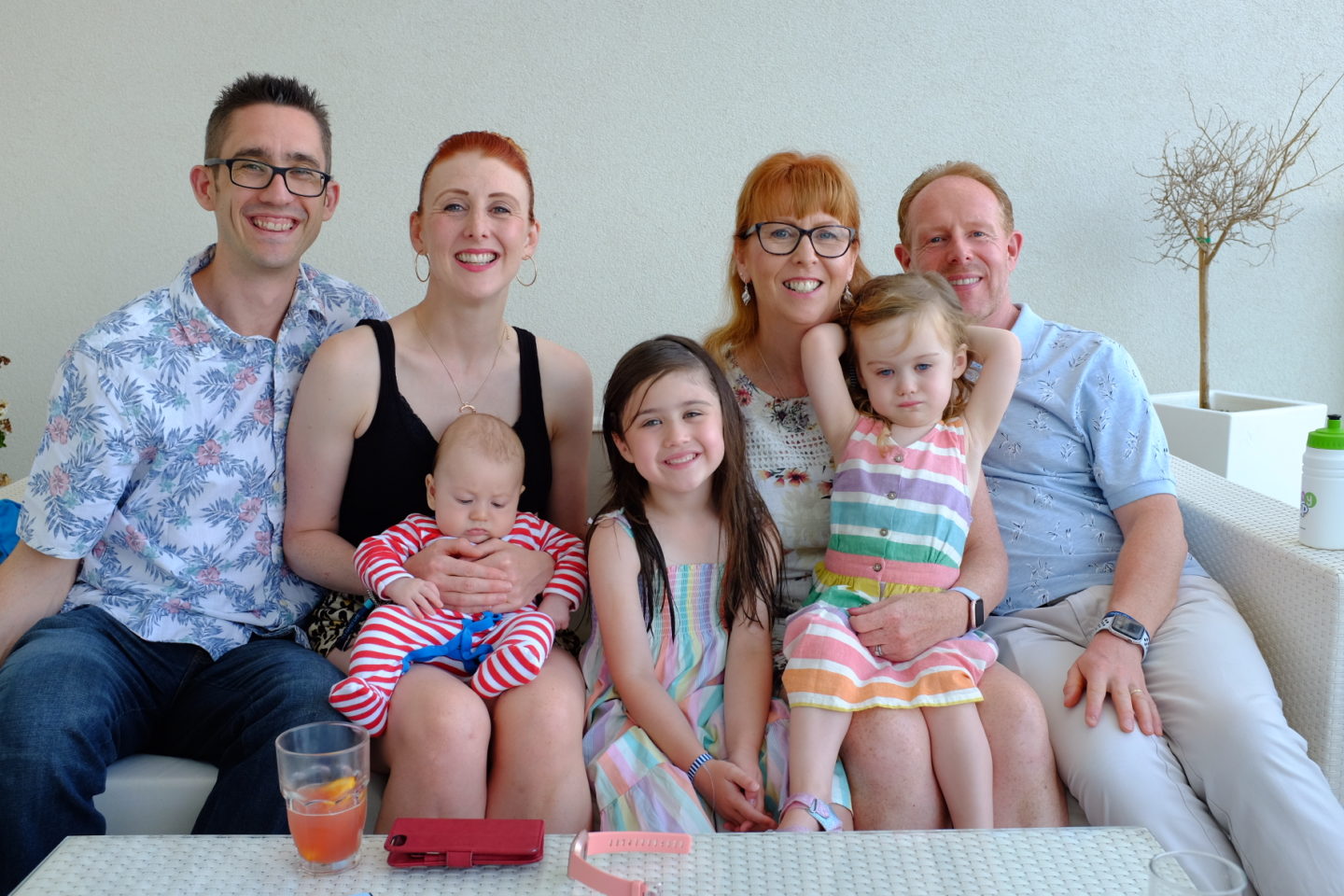 We have been back from our holiday to Croatia for almost 2 weeks now and as usual it feels like forever. I definitely think with kids you are swung back into reality so much faster but it is hard to adapt after 10 days of help from my parents and no cleaning up!

This is is our 6th holiday with my parents since the gremlin was born and I have to say after coming back, I’m not sure we would have had such a good time and rest without them, now we have three kids! 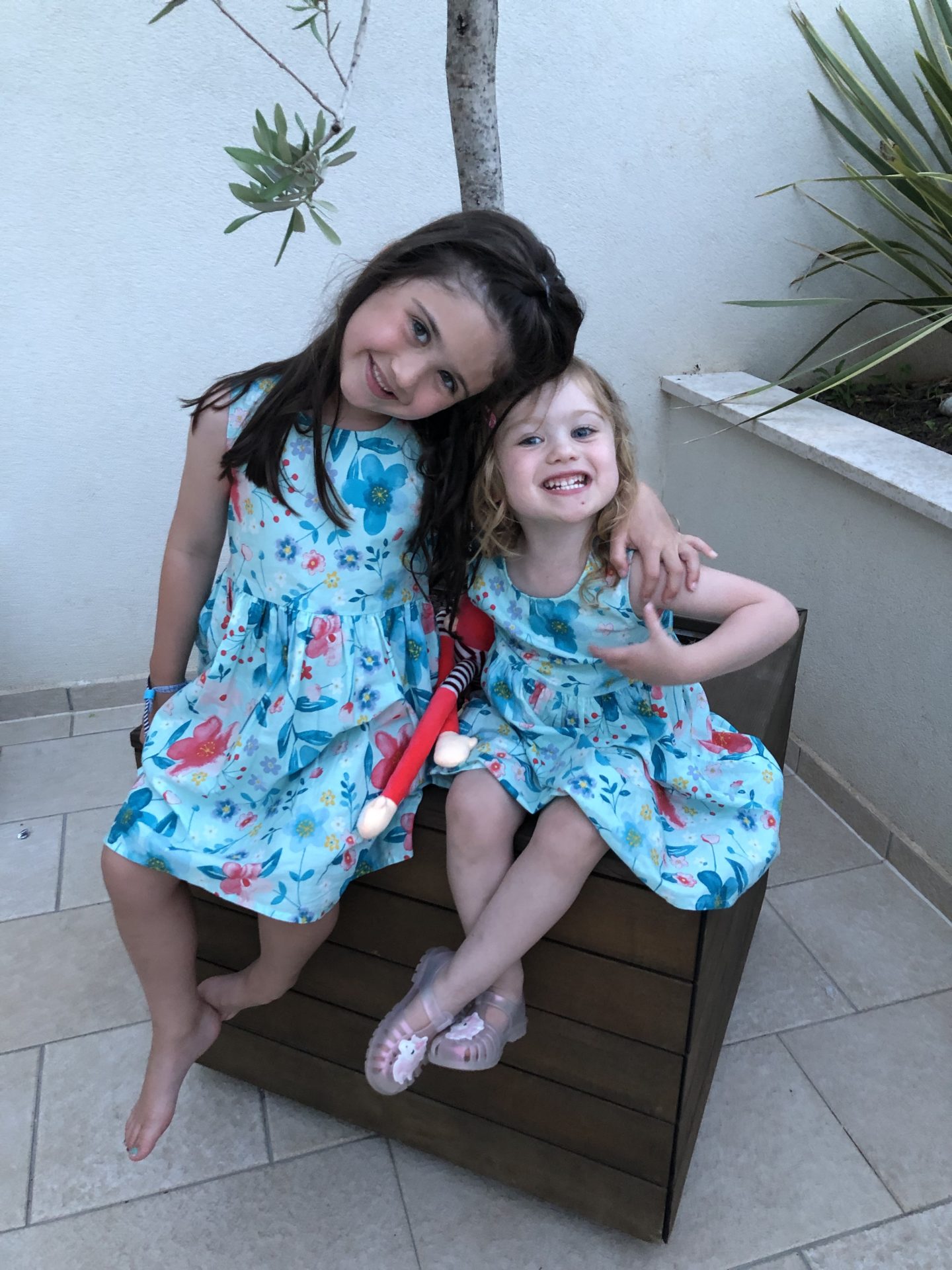 Where Did we Stay?

We went away for 10 days and stayed in the TUI Family Life Bellevue Resort in Rabac.  It was basically cut into a rock by the sea and a beautiful location. We had all never been to Croatia before and it was only a 2 hour flight which was fabulous with the three kids. 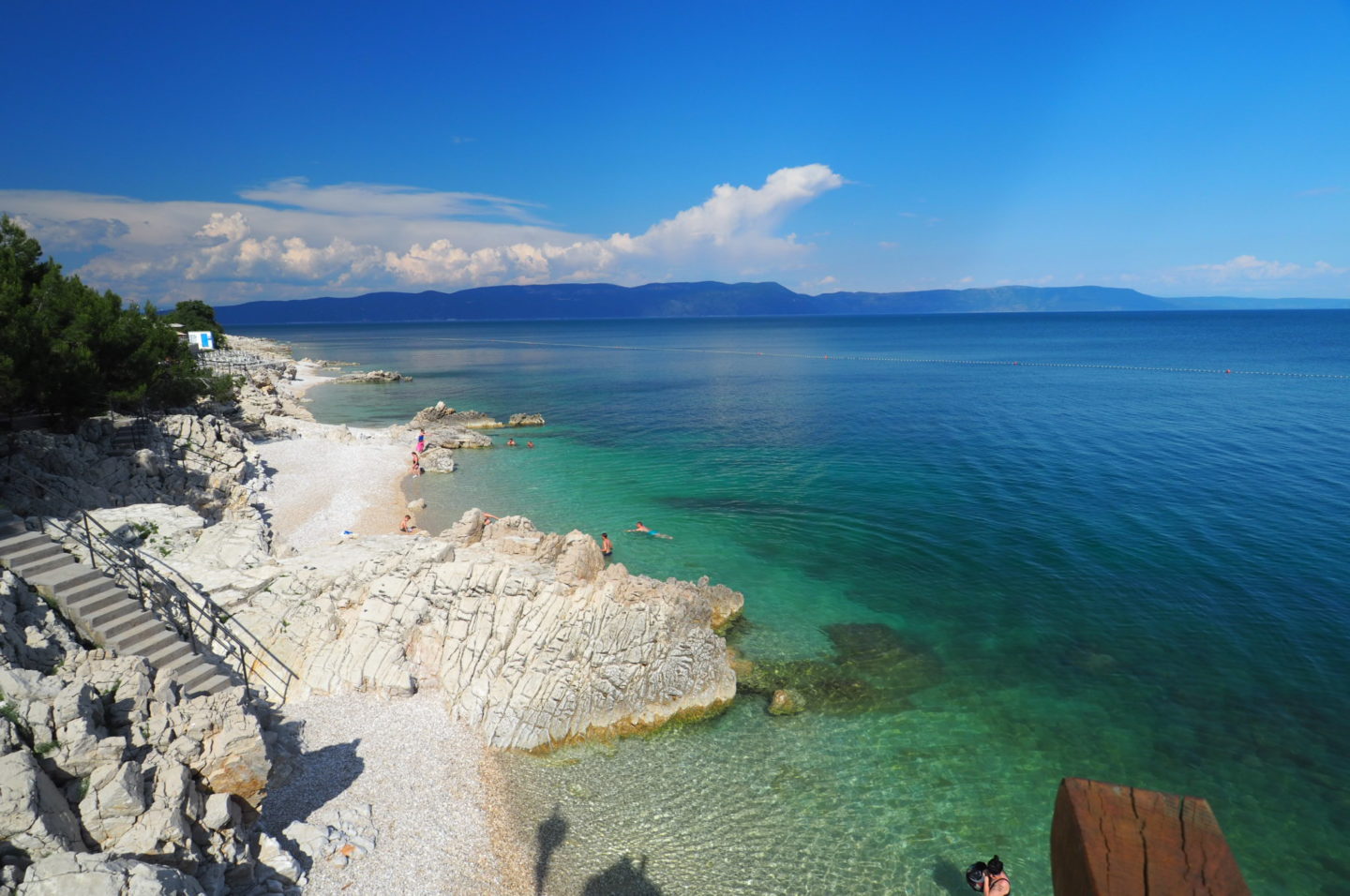 It was an all inclusive hotel and we had secured two free child places but we did take the gremlin out of school.

Hubby and I had to make peace with the fact that we would not really be able to go on any trips this year with the little guy. Most said not suitable for kids, as very long days and lots of walking and we couldn’t leave the little guy yet. We hope to go back one day and see more of the country.

Our flight out to Croatia was an early one so we had to get the kids up at 3am (!) and get to the airport. Luckily they were ok but the girls were so shaky! The flight was fine and the drive to our hotel was only 45 minutes.

We arrived, tired and hungry but keen to explore.

The Hotel in Croatia

The hotel was amazing I have to say. Our room was one of the biggest we have ever had and we had separate rooms to the girls. There was so much storage space.

The food was lovely and I didn’t get too sick of it either. They rotated meals each week and had various themes like Italian or Croatian food. There were snacks, fruit, sandwiches and ice-cream. The drinks were good especially the wine and Prosecco! I’m not a huge cocktail fan on holiday, as they are so sweet!! 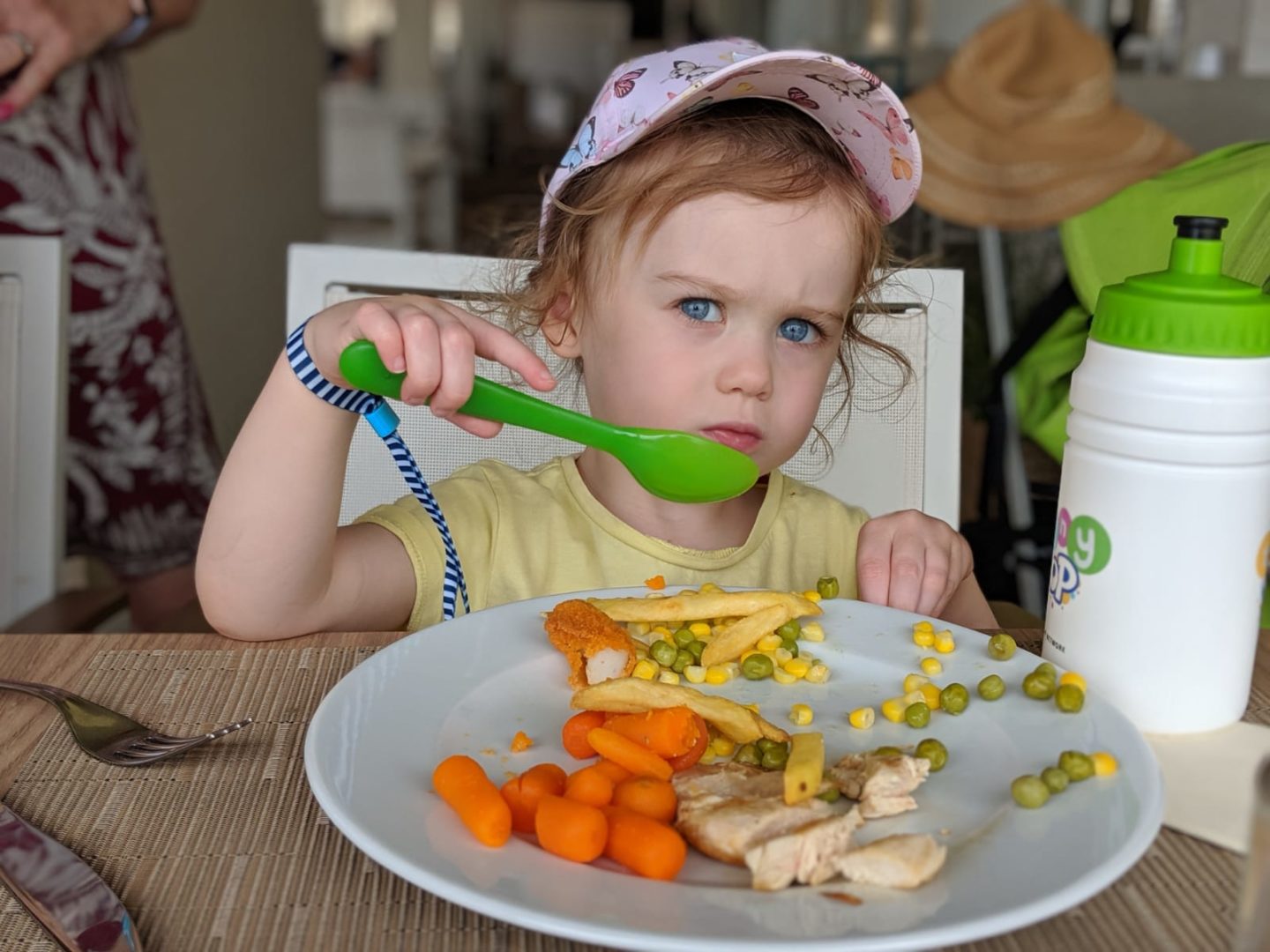 The pool had a few pools and some fab kiddie ones and slides BUT they were rammed and we found them too stressful. It meant more walking and the hotel was full of steps(!) but we chilled at the relaxation pool and took the girls down to the slides and kiddie’s area. 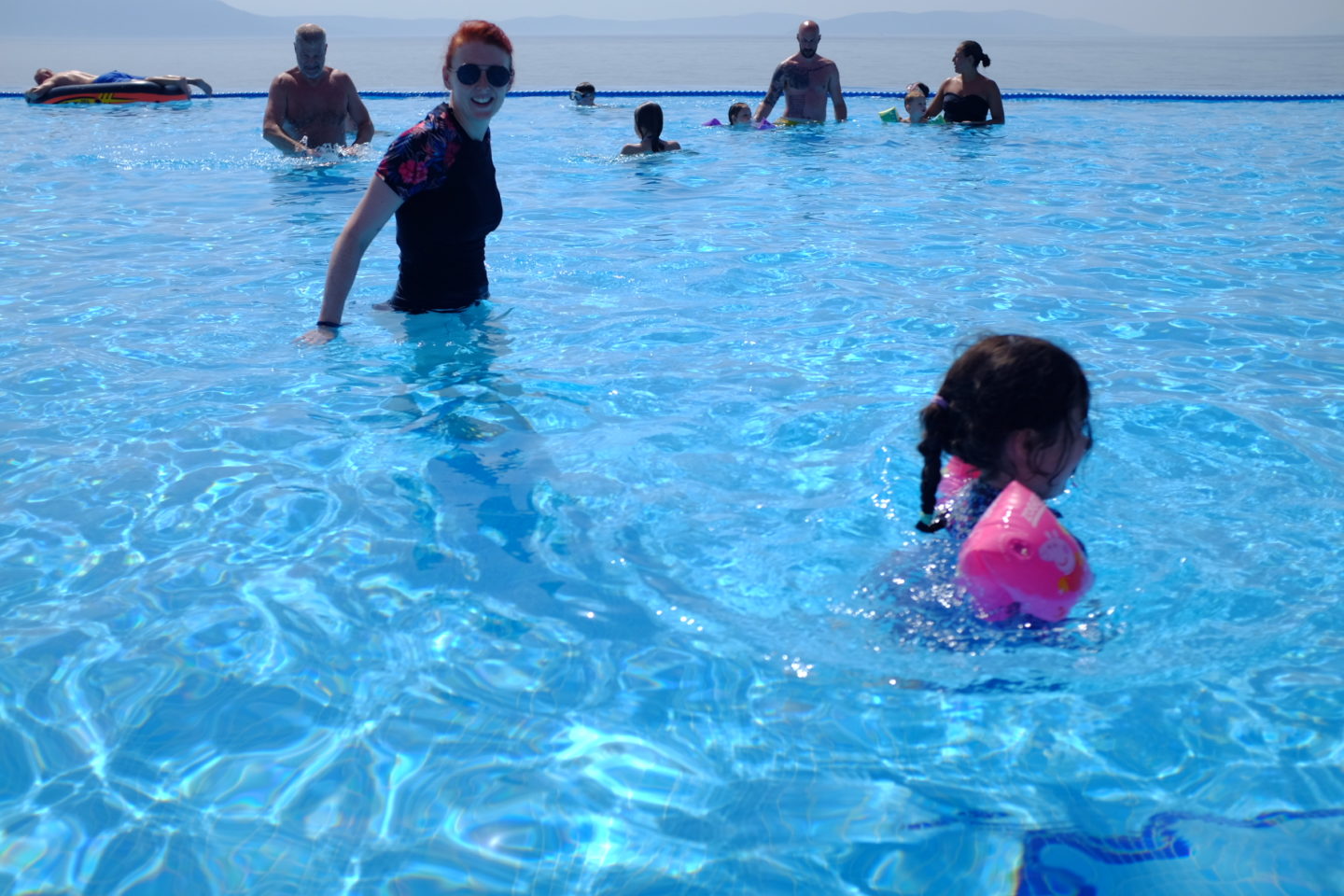 The gym (which is very important to me and my step-Dad) was a good one. Plenty of weights and equipment and we managed a go a number of times during the holiday.

Entertainment-wise it is definitely geared up more for the kids as is a Family Life hotel. However, the girls loved it and the gremlin stayed up to watch some, when I headed back to the room with the Little guy. The grem also went to the free kid’s club for 3-5 years olds a couple of times (she wanted to go!) and really enjoyed. You had to pay for the Baby Club for the Dude and Piglet. We didn’t bother as they have not wanted to go either!

If I woke up in time which was around 7am I’d head to the gym and often meet my step-Dad. I’d usually only have around 45 minutes to train but I preferred to get this in early, as felt a bit mean disappearing during the day with the three kids! 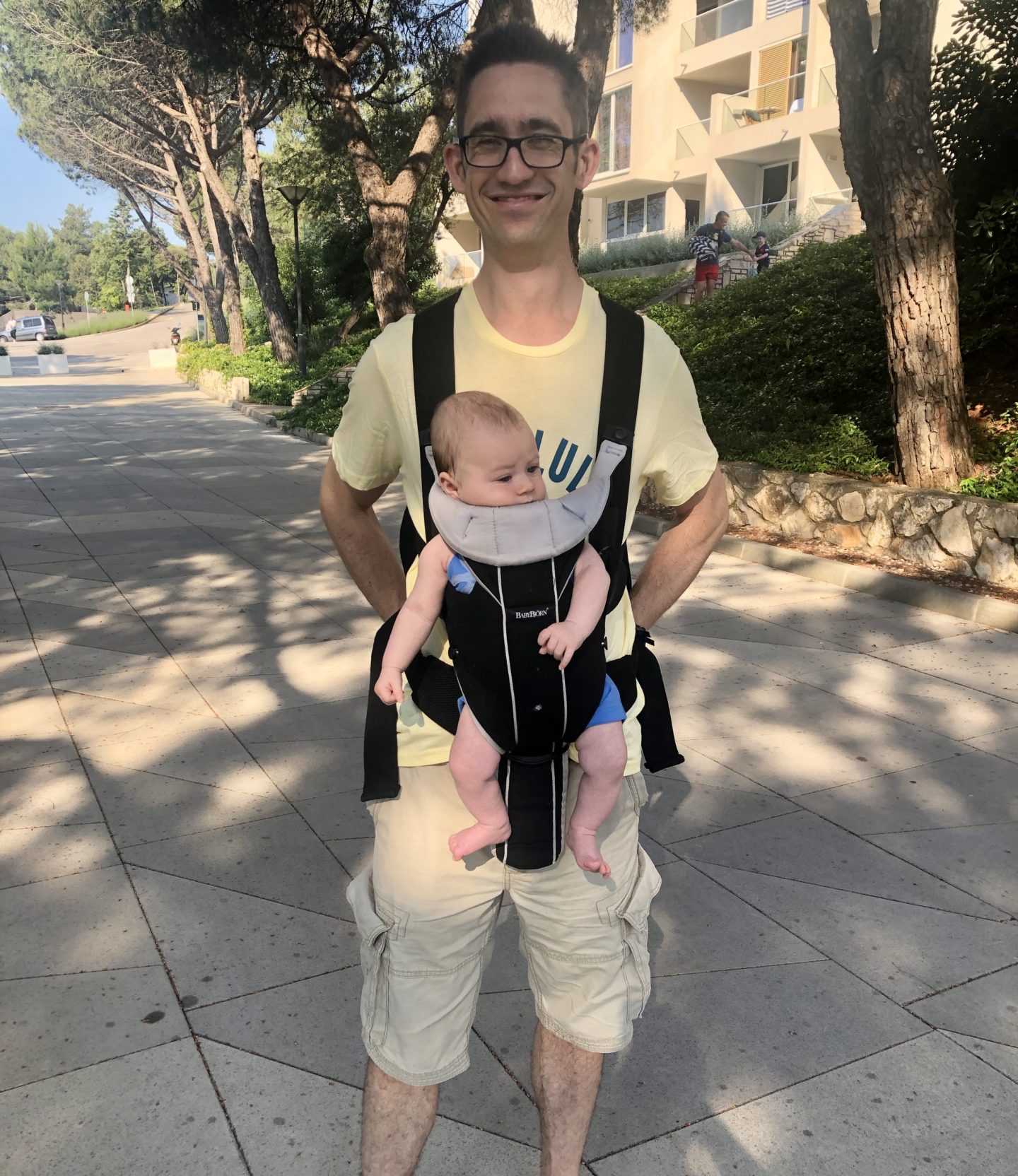 By the time I was back everyone was getting up and we were heading down to brekkie. I love hotel breakfasts on holiday, as plenty of fruit, eggs, pancakes and my downfall – bread and butter! The gremlin was chocolate obsessed but Piglet was happy with a banana, cereal and sometimes some grapes. 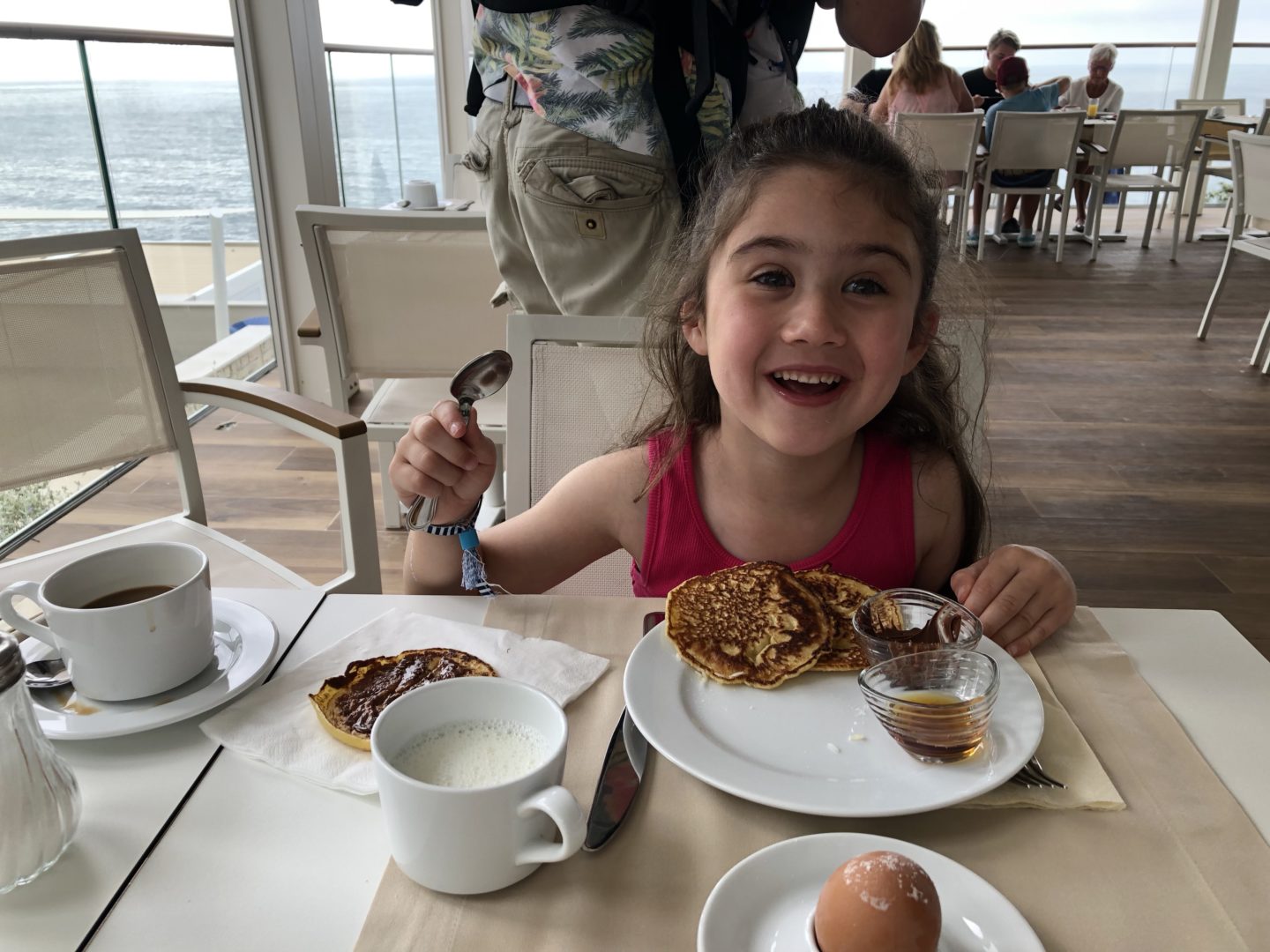 We were quite lazy as the beginning of the holiday and took ages to get moving so often didn’t get a sunbed or the morning would just go! We got wise to this and we were driving my hubby crazy, so started to move a bit more. 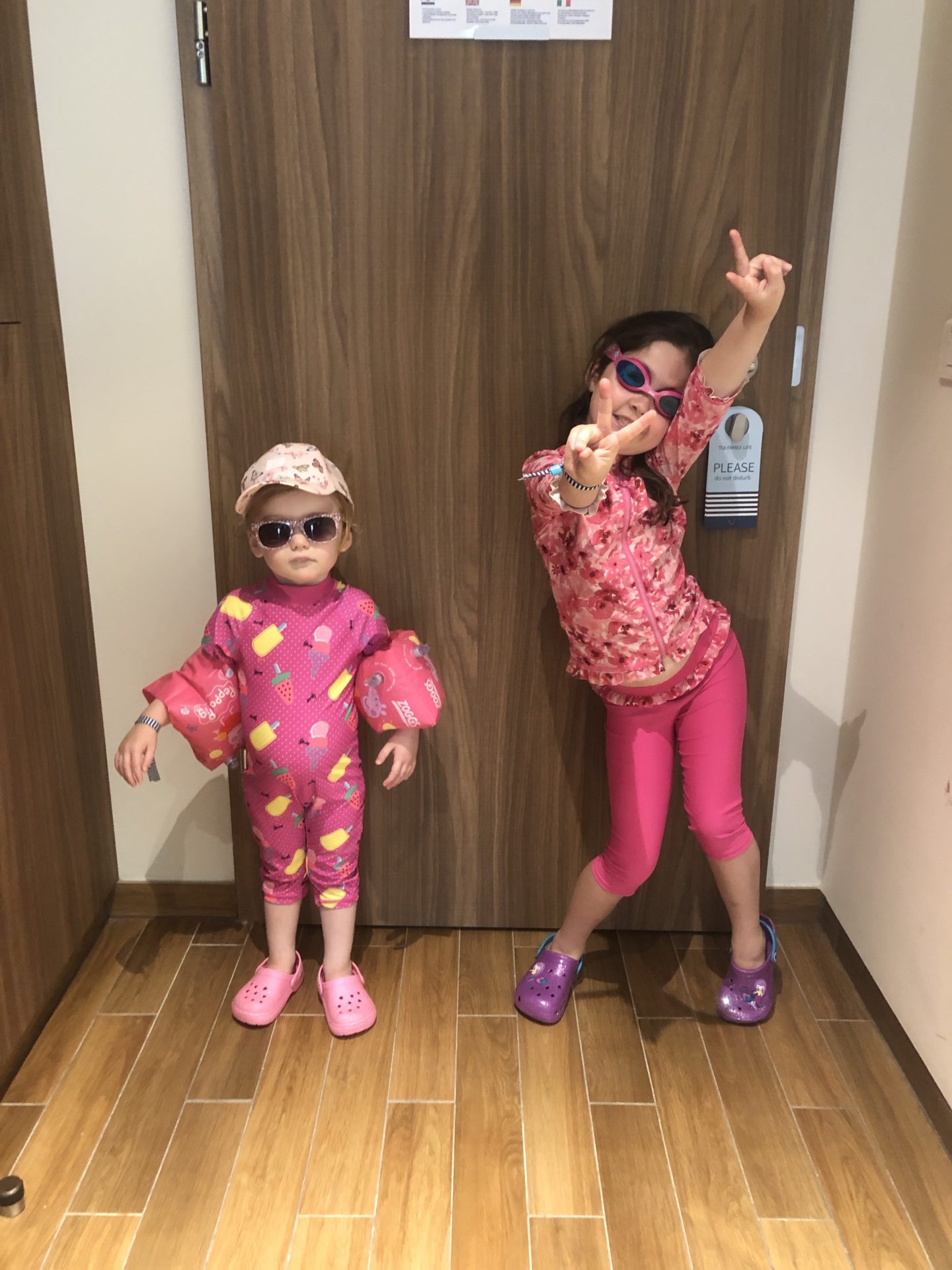 We mainly did spend time by the pool during the days. We took it in turns going down to the pool with the girls. I loved the big slides and the gremlin got braver through the break and went on all of them with us all. Piglet liked the small kids pool but did brave the bigger slides on our knee. 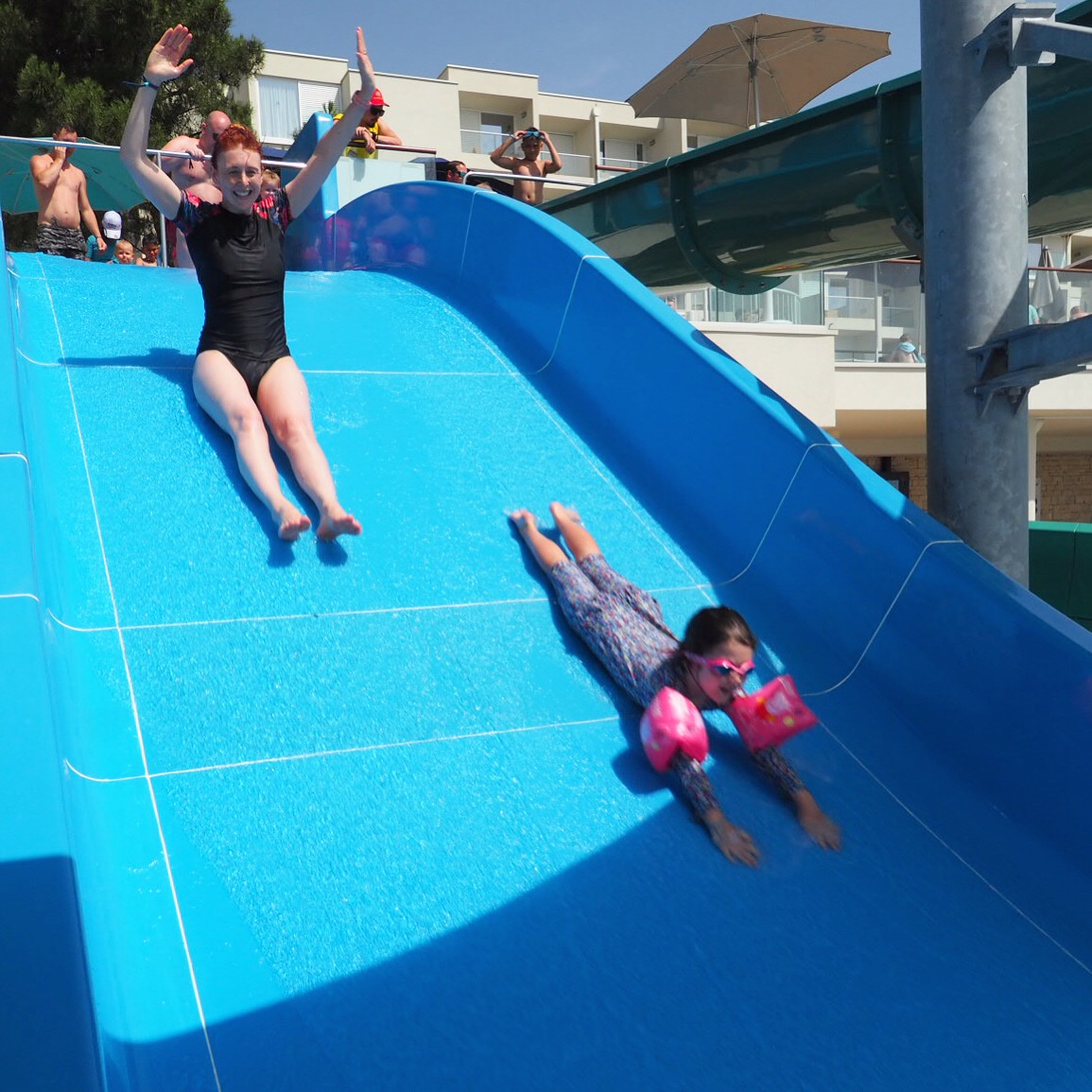 My Mum and step-Dad had a trip out and explored a bit of the local area which they enjoyed and on that day the gremlin went to kid’s club which she really enjoyed.

We also took the small train into Rabac and browsed the harbour and some of the local shops. The grem drove us mad wanting to buy tat and it was very hot on that day. She was placated with a lovely ice-cream on the way home as we walked back. 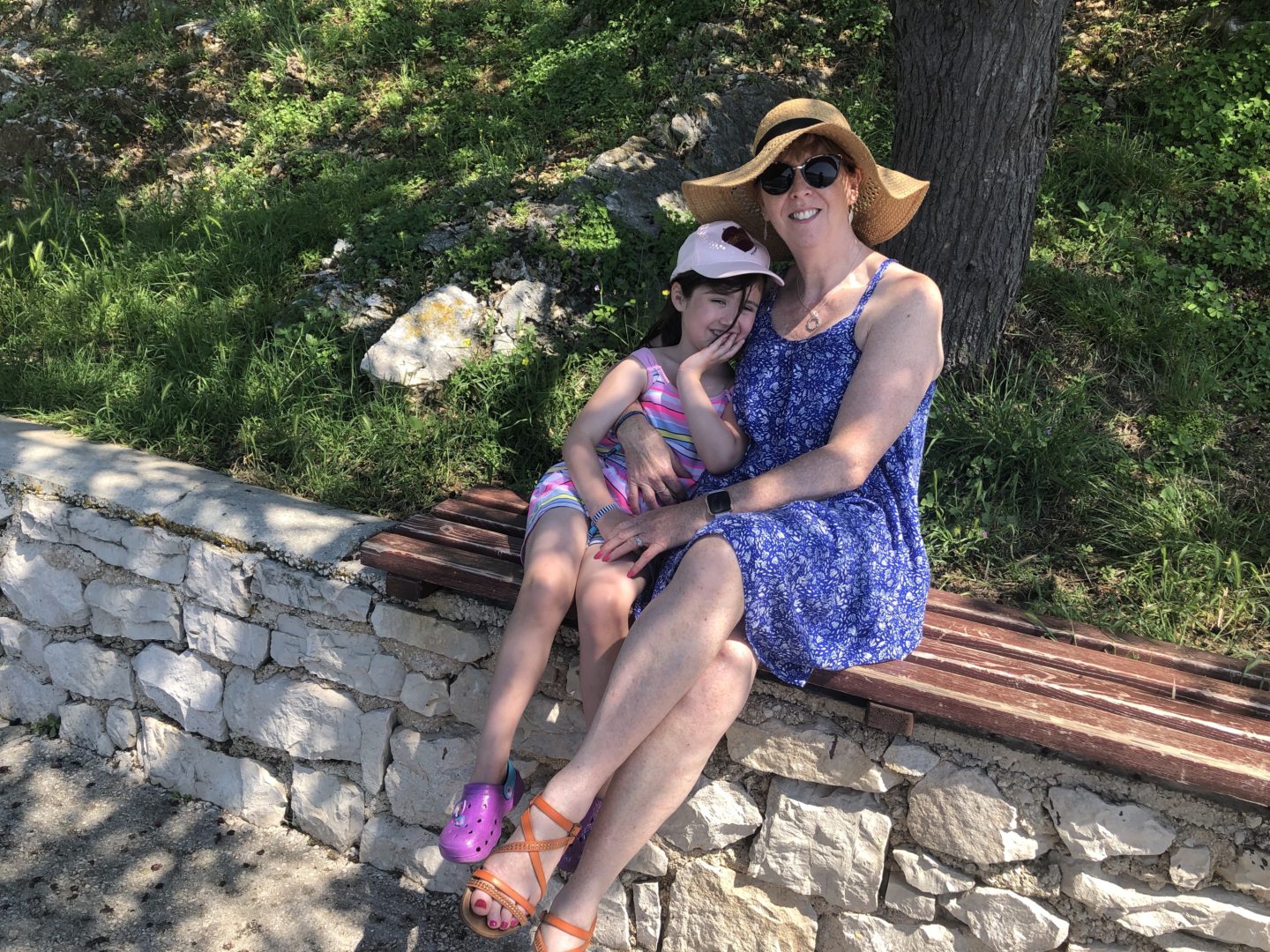 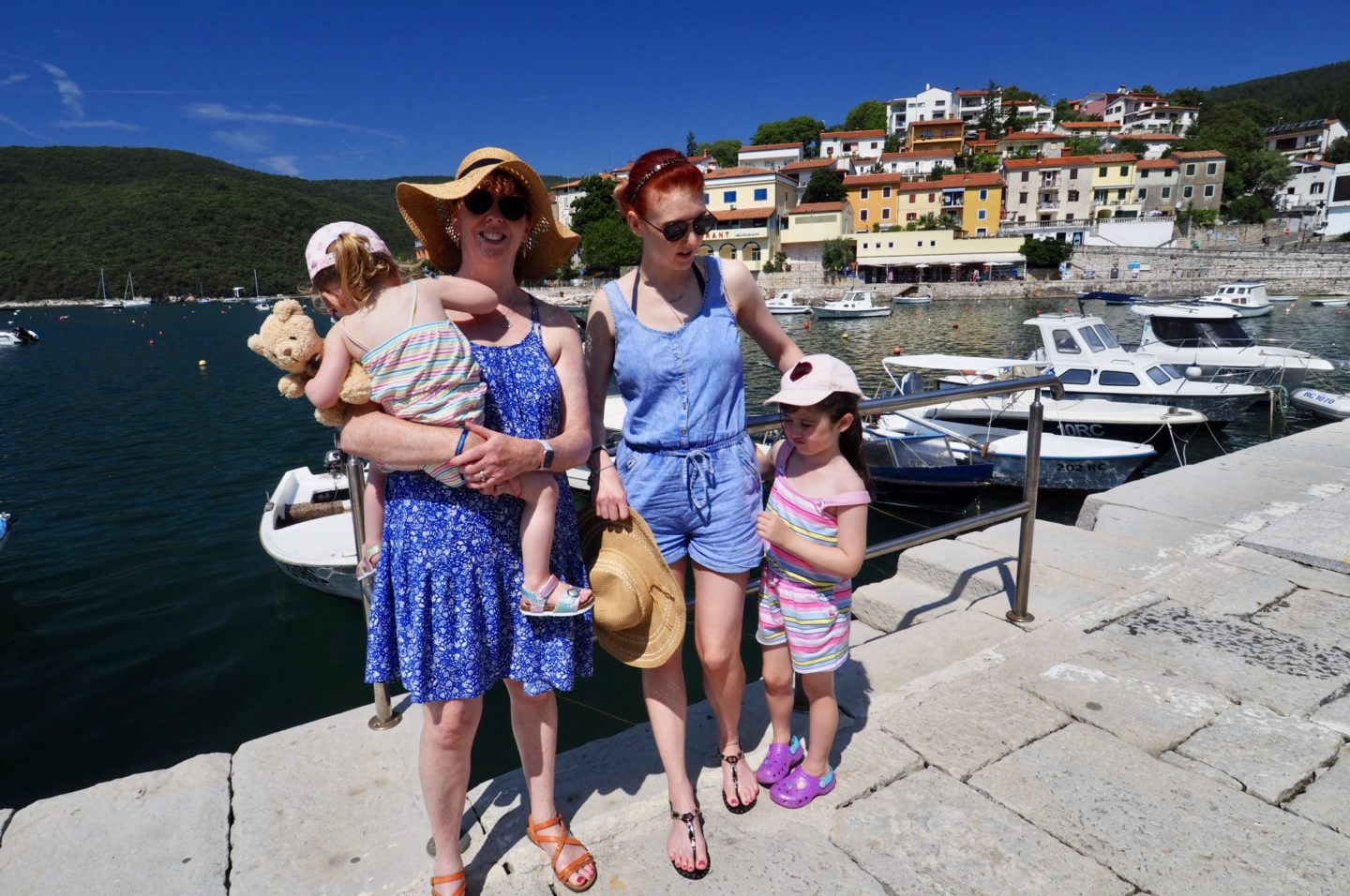 Piglet loved the park and we went down and looked at the beach too. it was so beautiful but very hot and you had to pay for sunbeds down there, so we didn’t chill there for long! 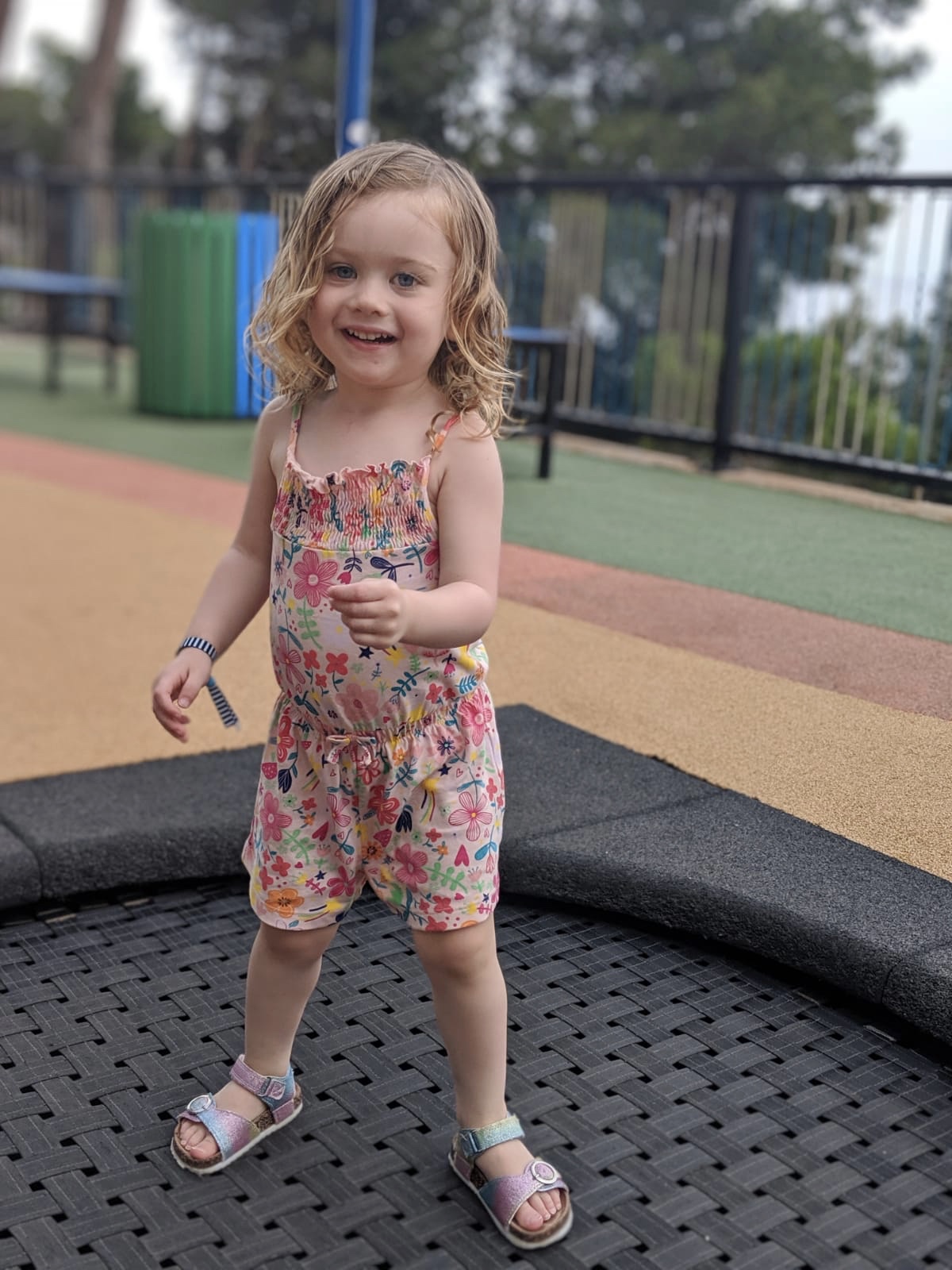 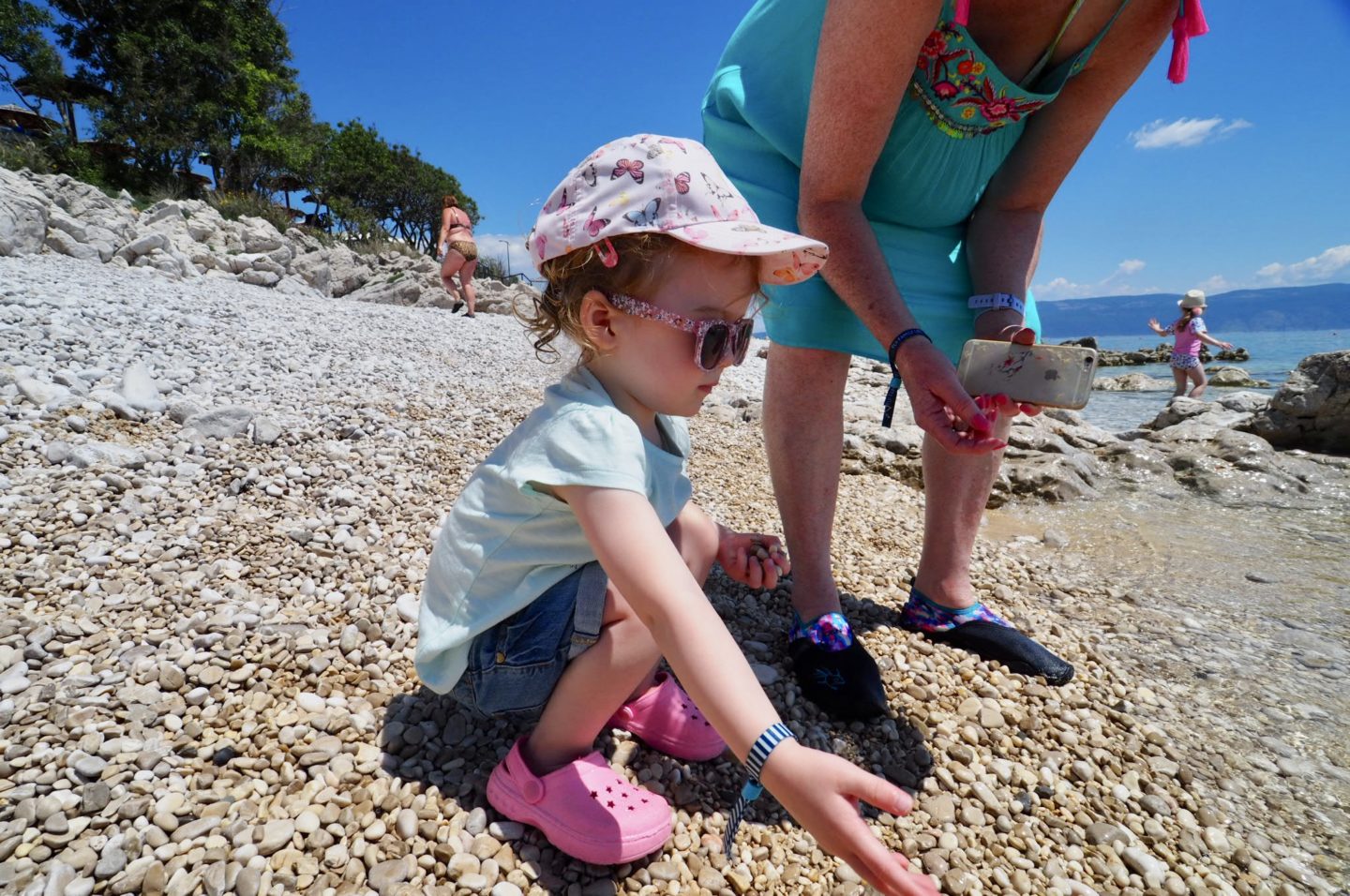 We always ended up going for lunch quite late and taking our time over it, so we ended up finishing quite late on. 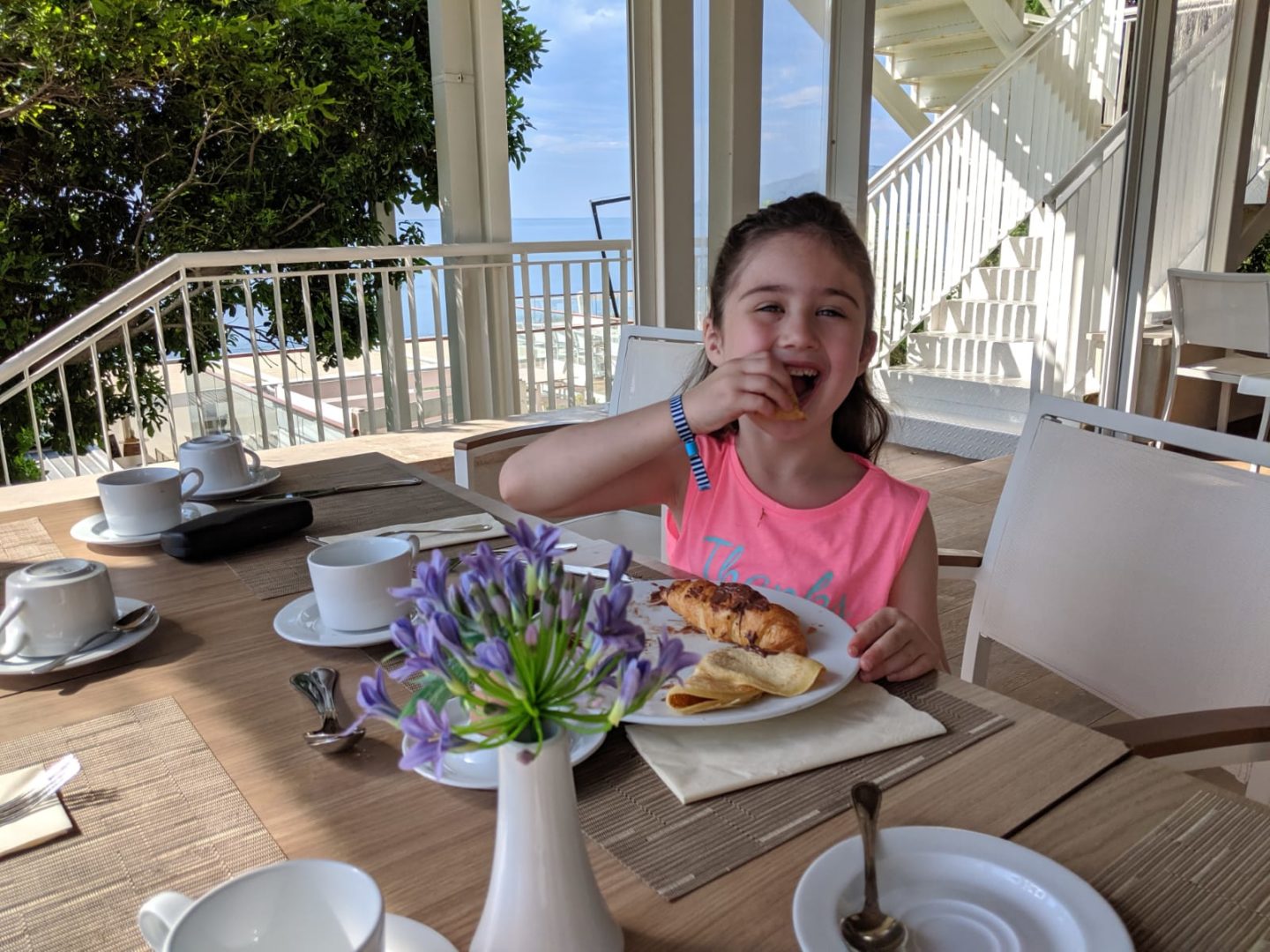 Most afternoons we tried to get the girls to nap but this didn’t happen every time. They often wanted to go back to the pool or play. The little guy just fit into our plans and he either slept, fed or was cuddled! 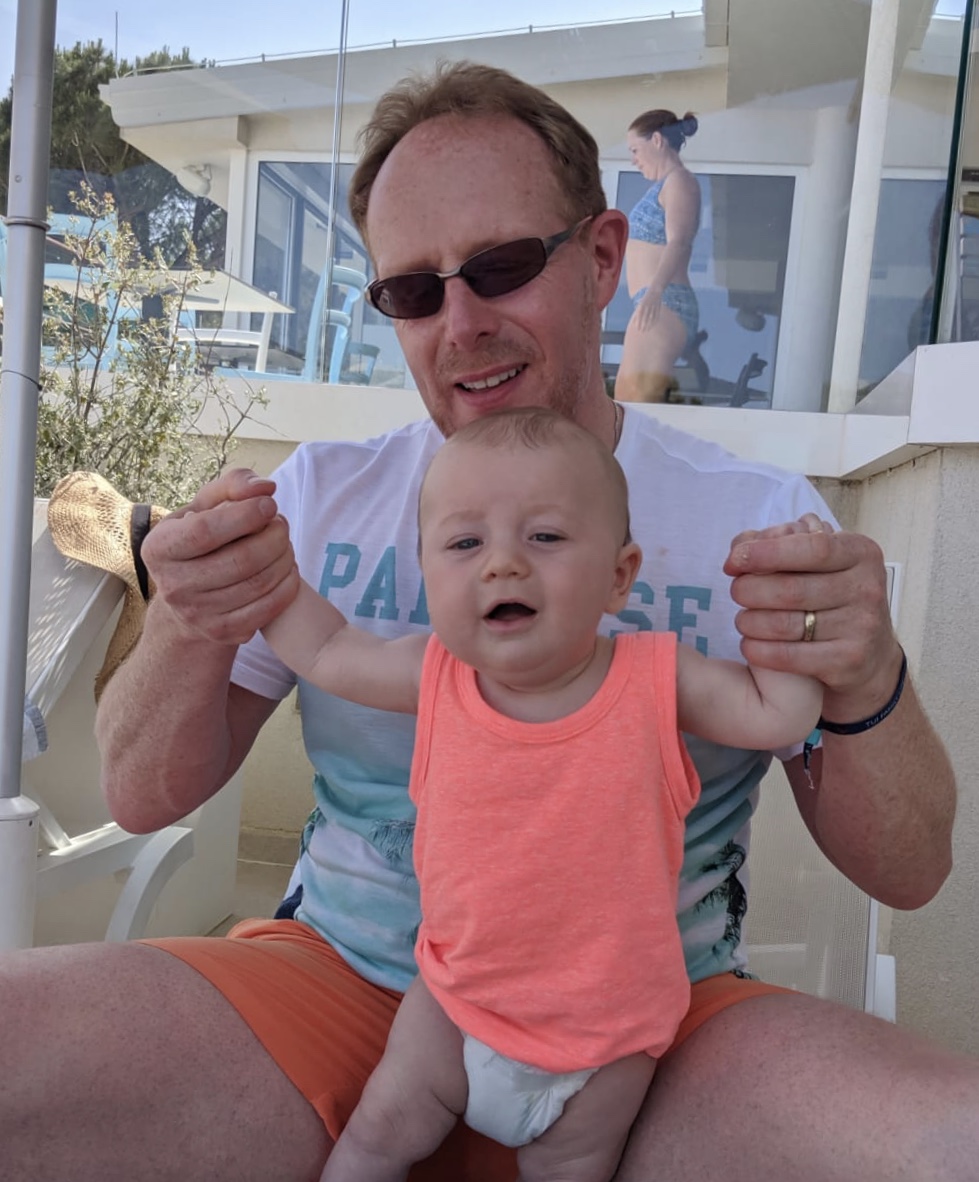 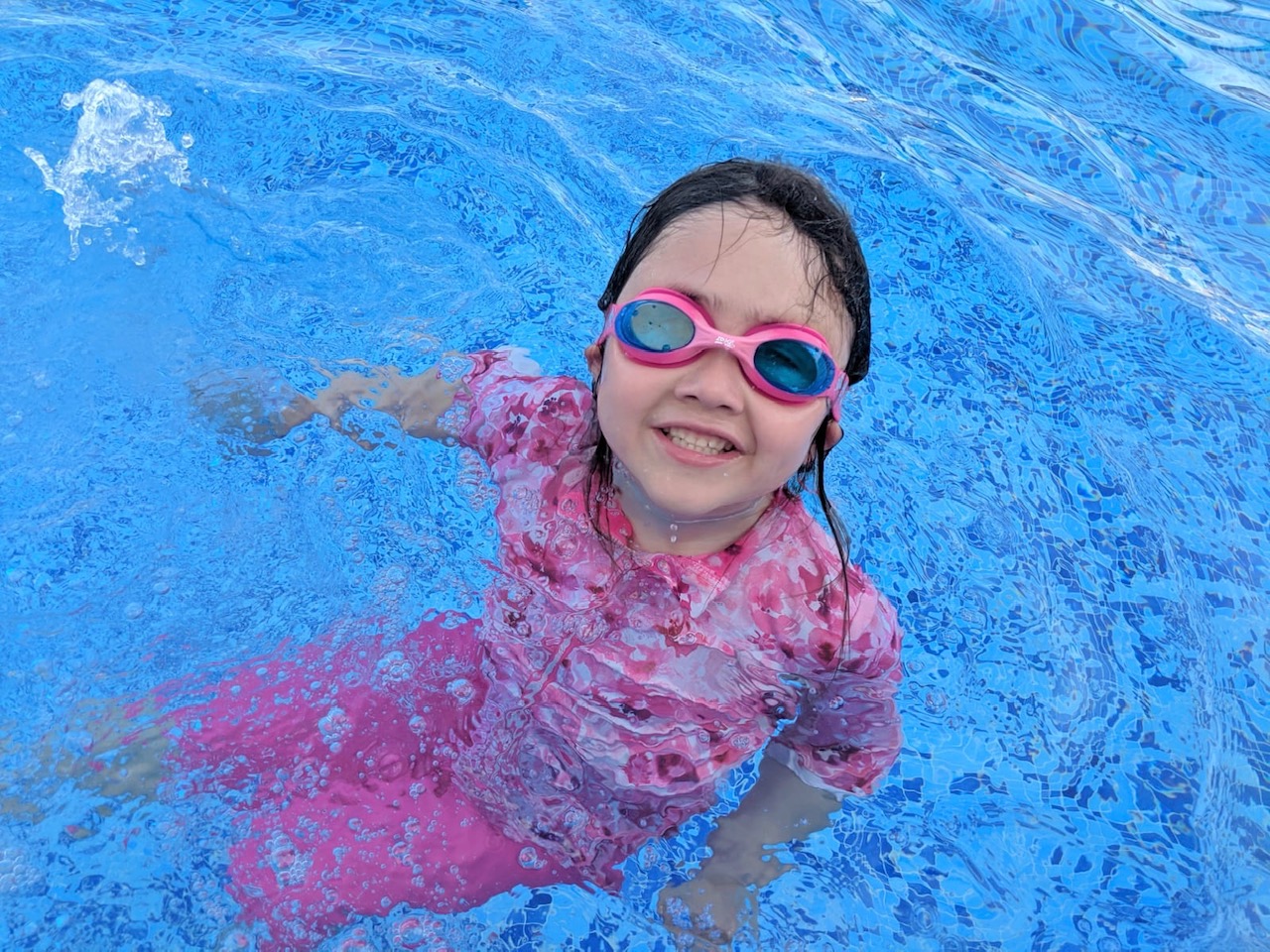 Piglet got more and more into the ice-cream as the week went on and the girls were always hankering after one! They never stopped moving though so I guess they were hungry! I always made sure I’d fed the little guy by 4pm, as that became Prosecco o’clock and I always have a cheeky drink (or two!). I knew I wouldn’t be having anything at night as the little guy’s feeding is so unpredictable and also who wants a hangover with three kids? 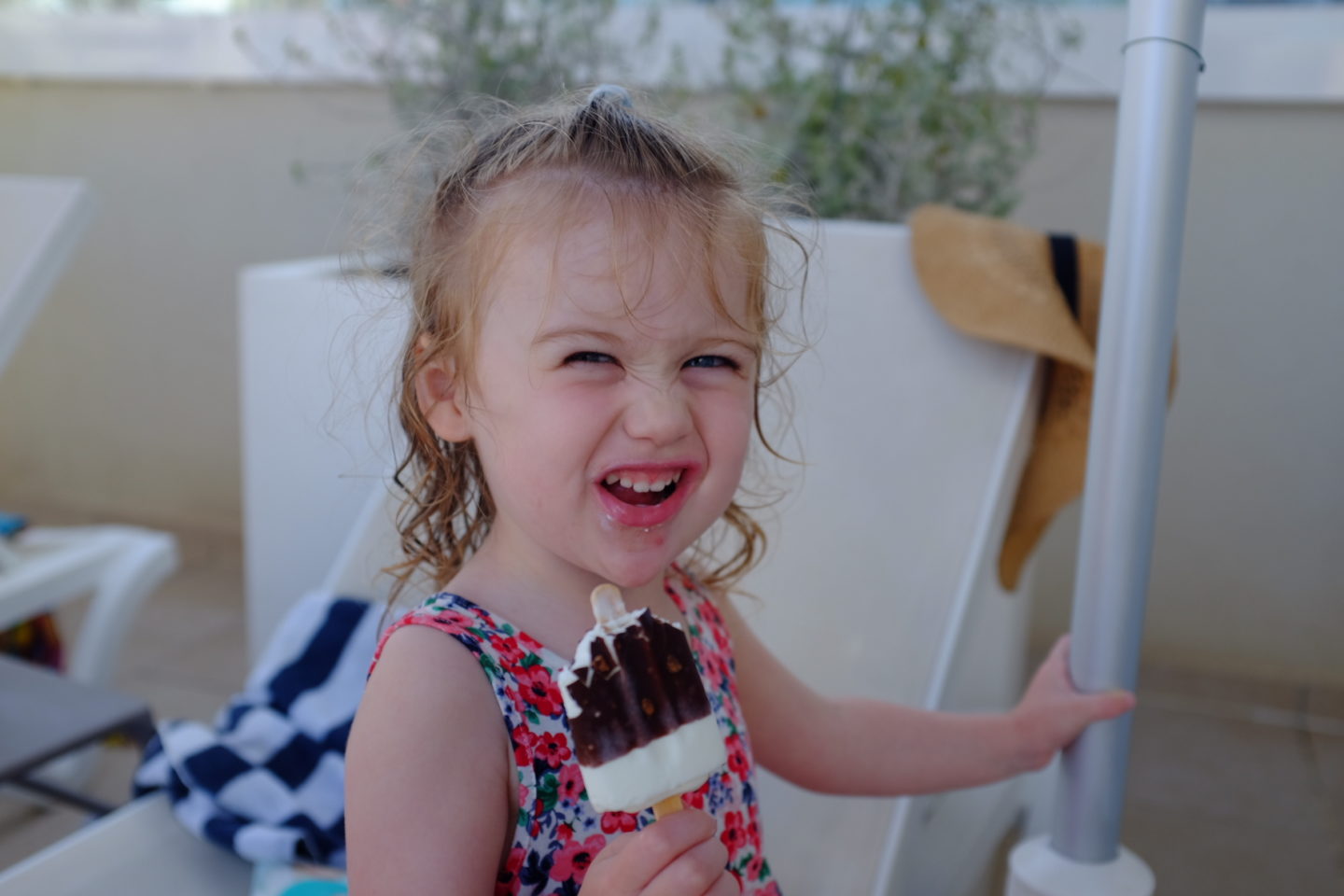 We used to like hanging around by the pool under 5.30-6pm and quite often my hubby was pretty merry as we headed back to the room to shower. I always find at the beginning of the holiday I like getting ready and going out but by the end I’m ready for my PJs at 7pm!! 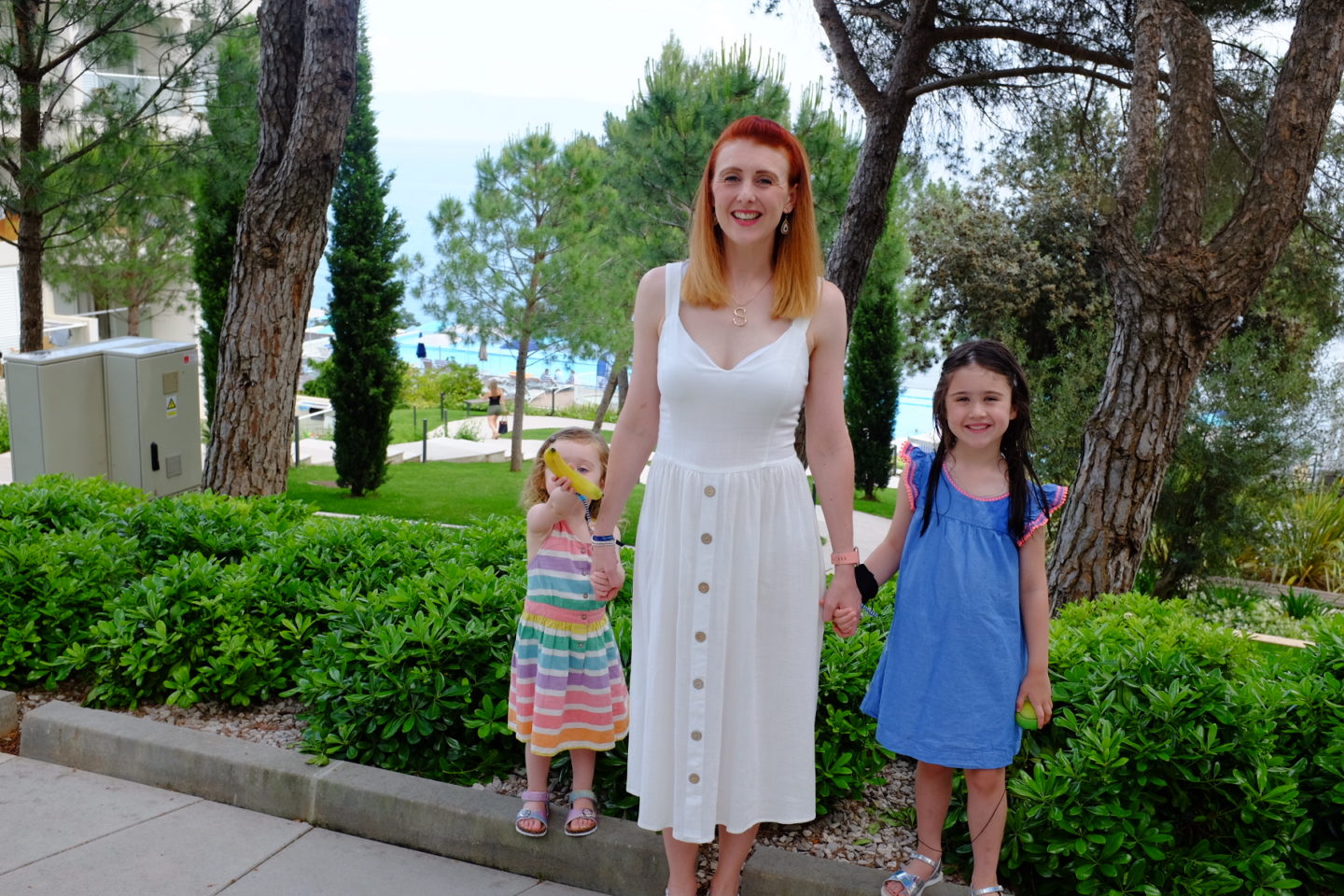 We always ate a lovely meal together and either chilled at the table after or headed off to the entertainment. I used to go back to the room by 8.30-9pm to get the little guy to bed. Piglet was usually quick on my heels as was tired and the gremlin was up after.

The nights were ok and the little dude had some good and not so good but he was full of cold!! 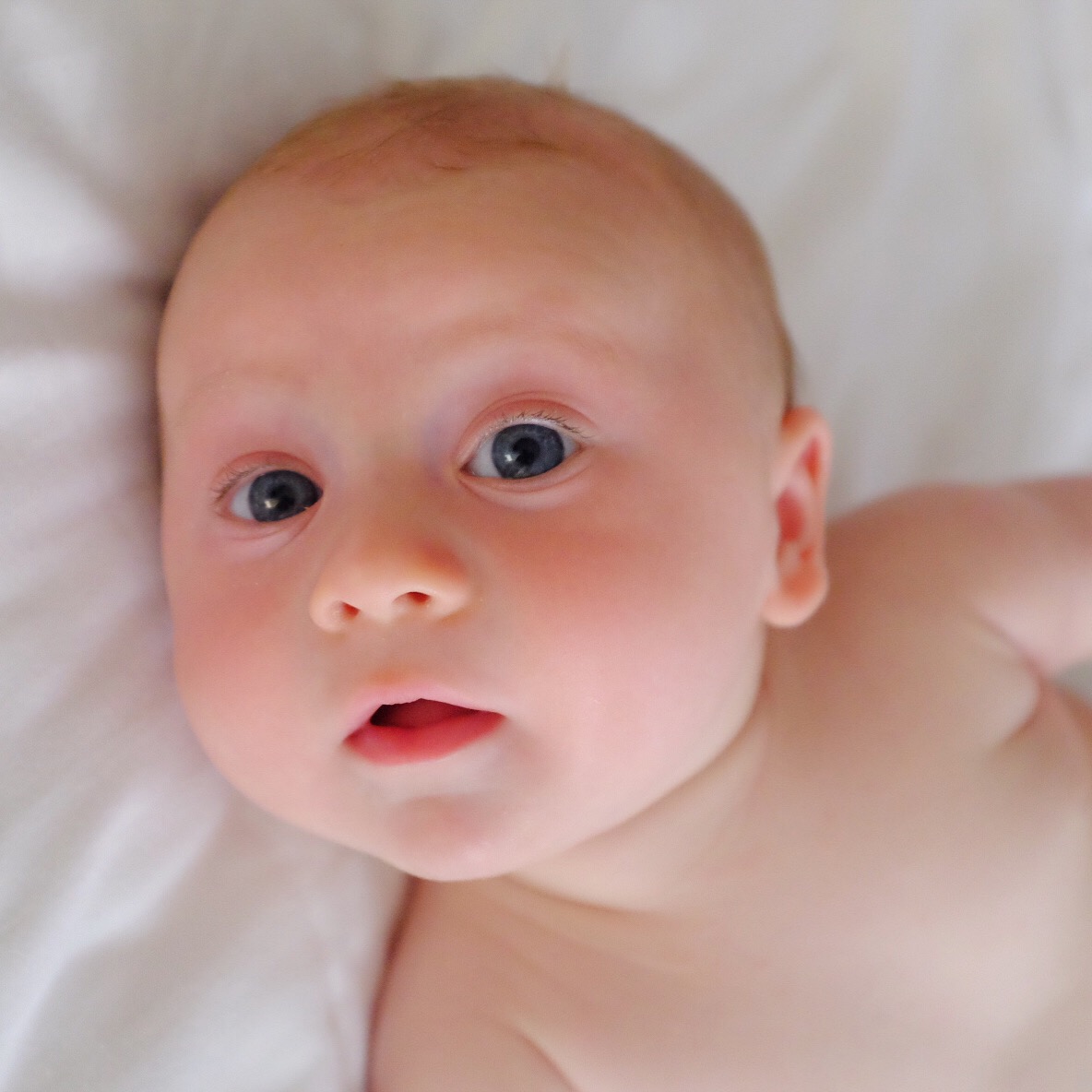 Overall we all said it was one of our best holidays. We loved Croatia and the hotel was lovely. The week did start off cooler and we had some rain. but it perked up enormously by the end and it was so hot.

As there were 4 adults we all got some chill time and I felt I read a bit and also got quality time with each of the kids, even though Piglet was surgically attached to my Mum!!

It was definitely harder work with 3 children who each want different things but we managed! 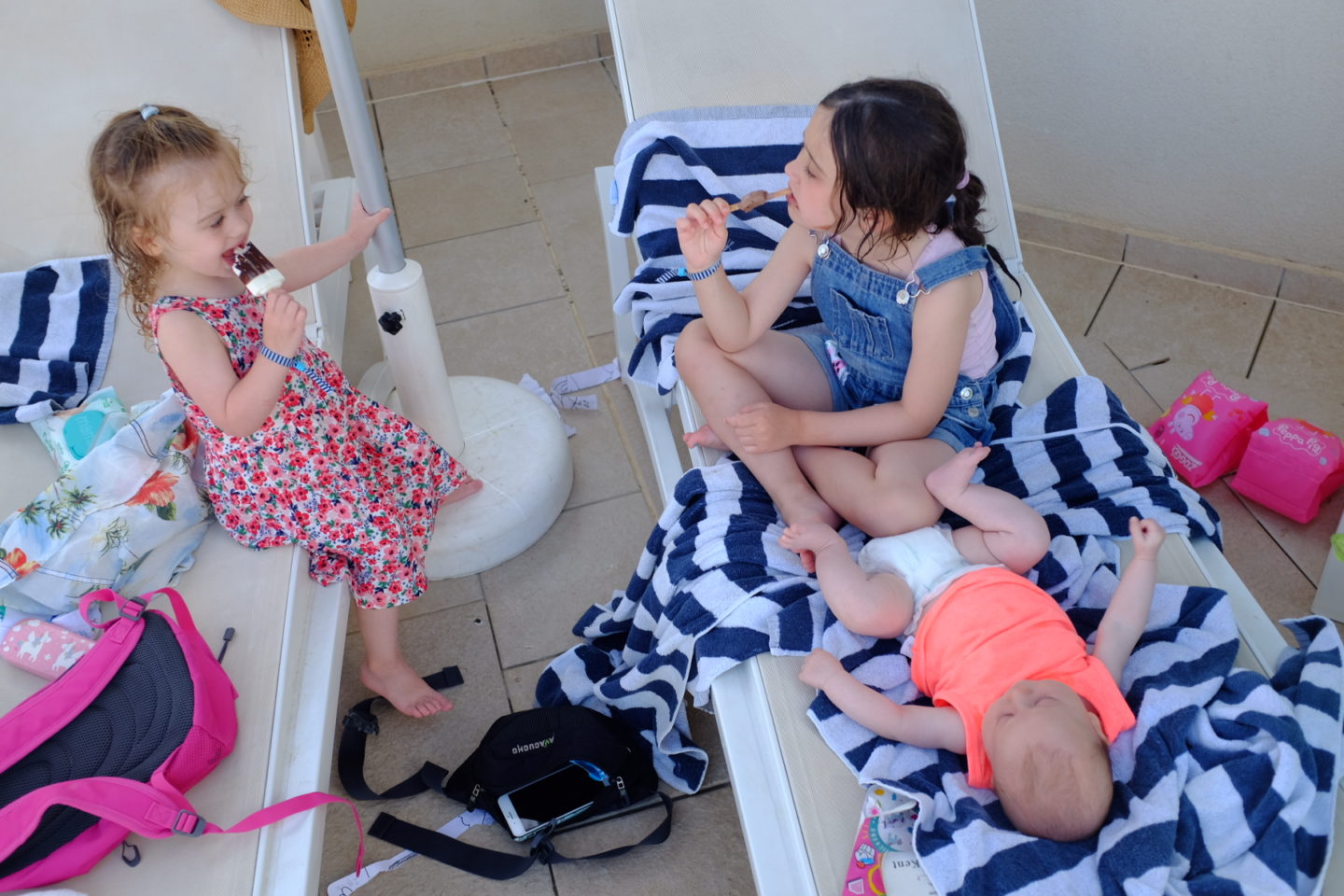 We would definitely go back to Croatia in the future and are now thinking about next year’s holiday!

You can read about our holidays to Fuerteventura, Rhodes, Cyprus and Crete here!

Have you been to Croatia? 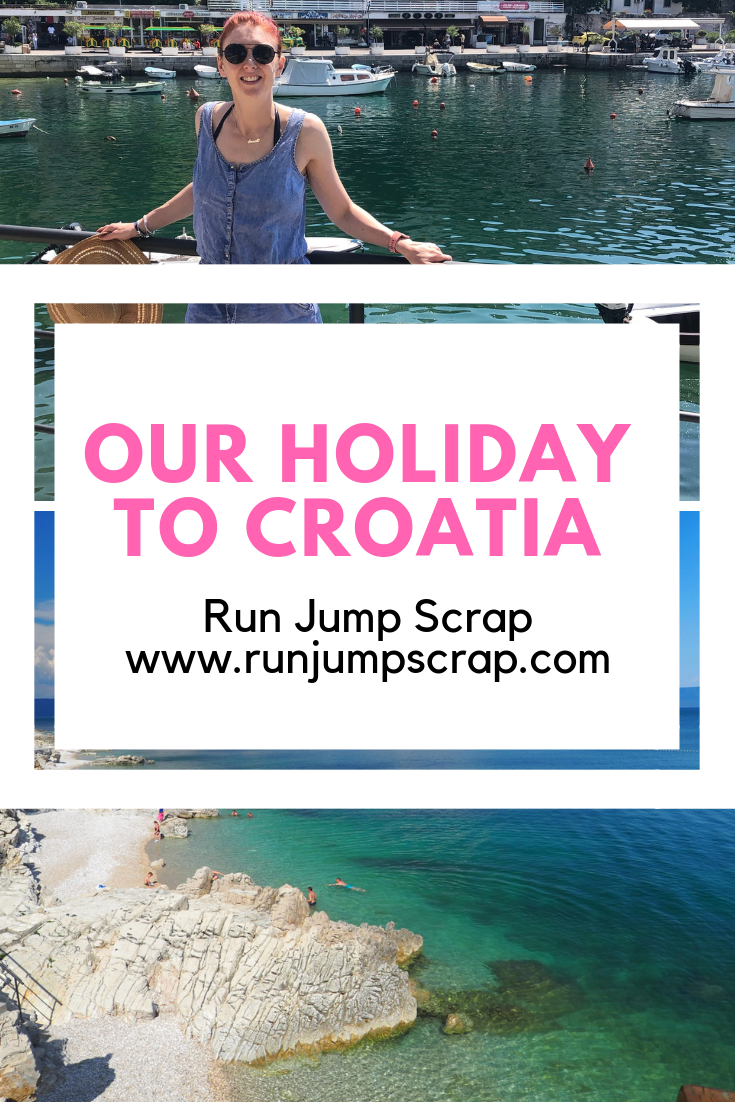