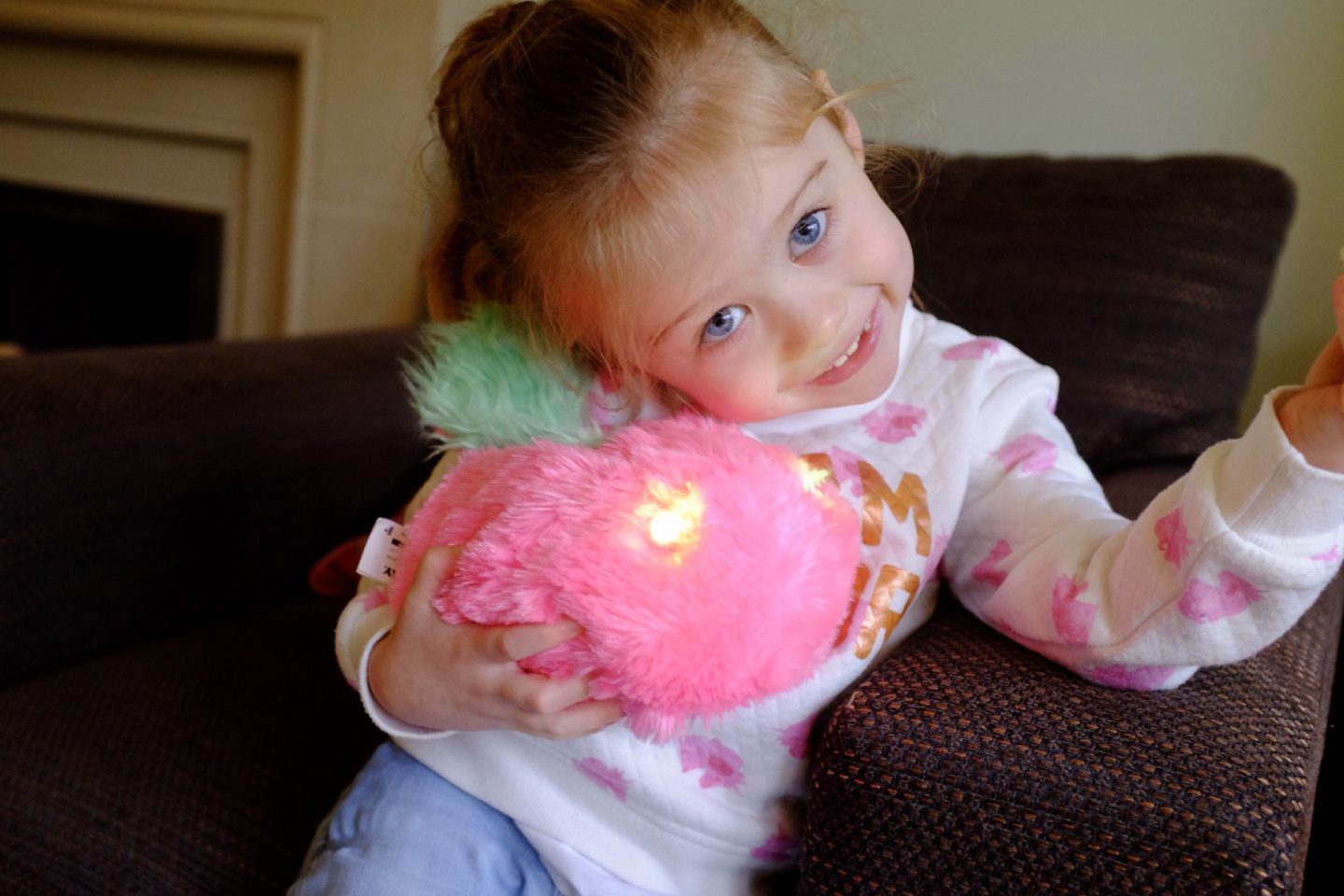 We are huge fans of interactive toys in our house; I think a lot of kids are. I always think it is crazy what is available now compared to when I was a child. I would have gone nuts. I can see the pull of interactive toys, as it makes you really feel you are looking after something real! Especially, if it reacts to you and you can love and care for it. We have tested out a few on the blog in the past and we really thrilled to be reviewing Rizmo from Tomy. My eldest spied it immediately in a very generous gift we were sent from Tomy this year and wanted to try it out straight away. 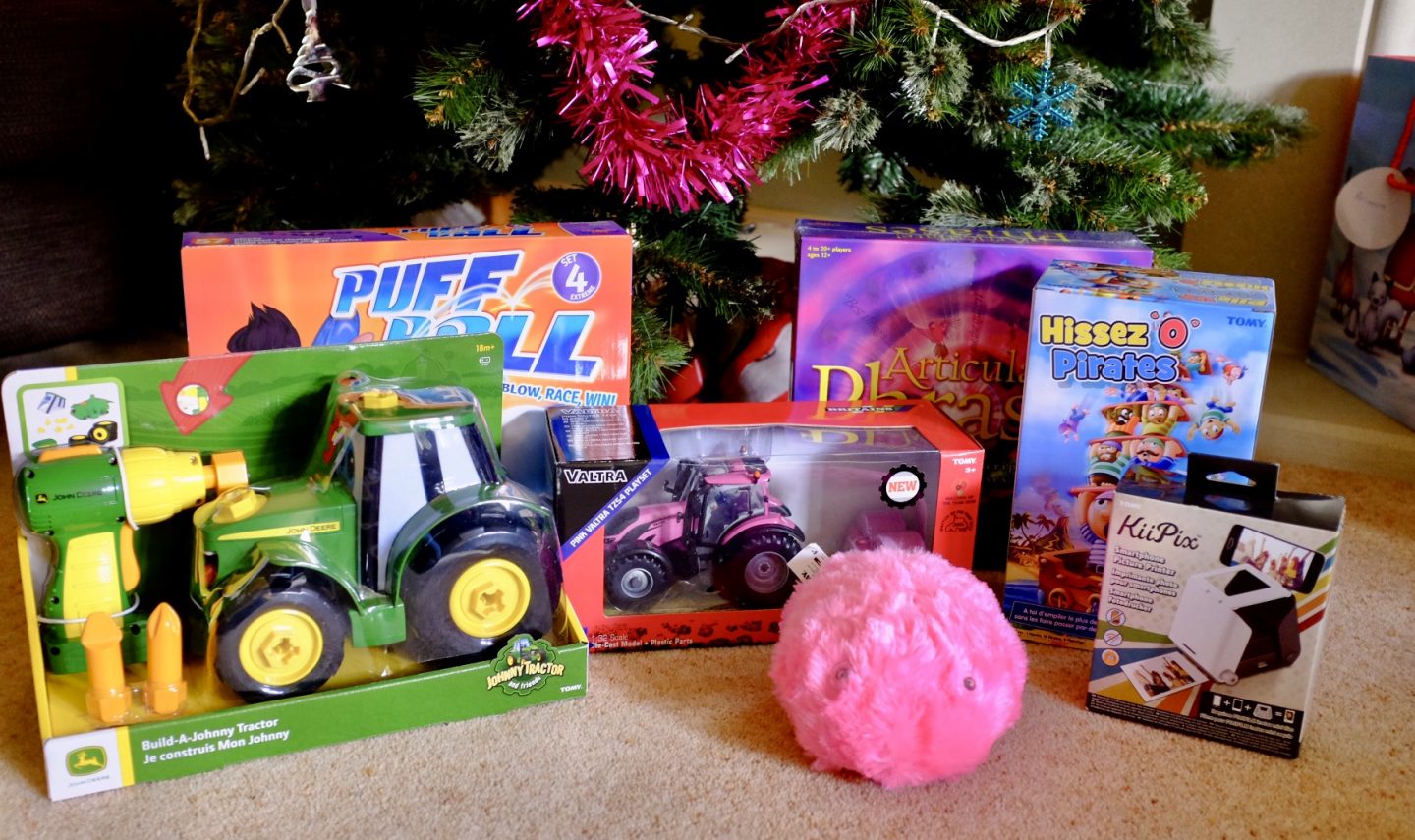 Rizmo has been named in the Dream Toys Top 12 and should be very popular with kids this Christmas time. Aimed at children aged 6 years and over, Rizmo is a toy that transforms, grows and actually listens, learns and remembers! He has crashed down from outer space and is looking for lovely people to look after him! 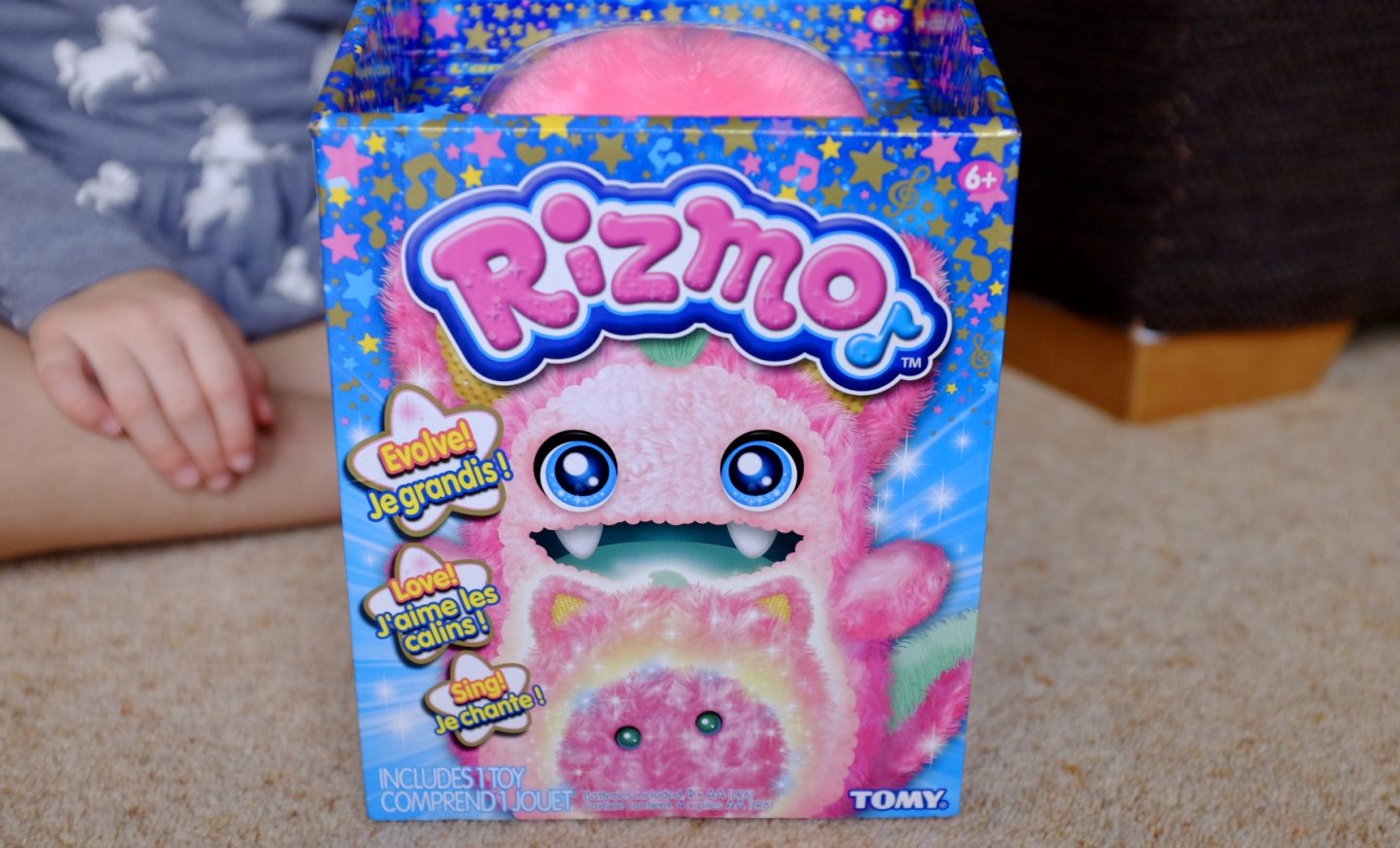 Rizmo has three forms: baby, toddler and adult and you help him to evolve from one to another. He loves to get to know you and responds to touch, motion and sound. Once Rizmo has grown up fully he can record and play songs, and imitate music. It really is a musical toy, so great for children who love to sing and enjoy listening to different instruments. 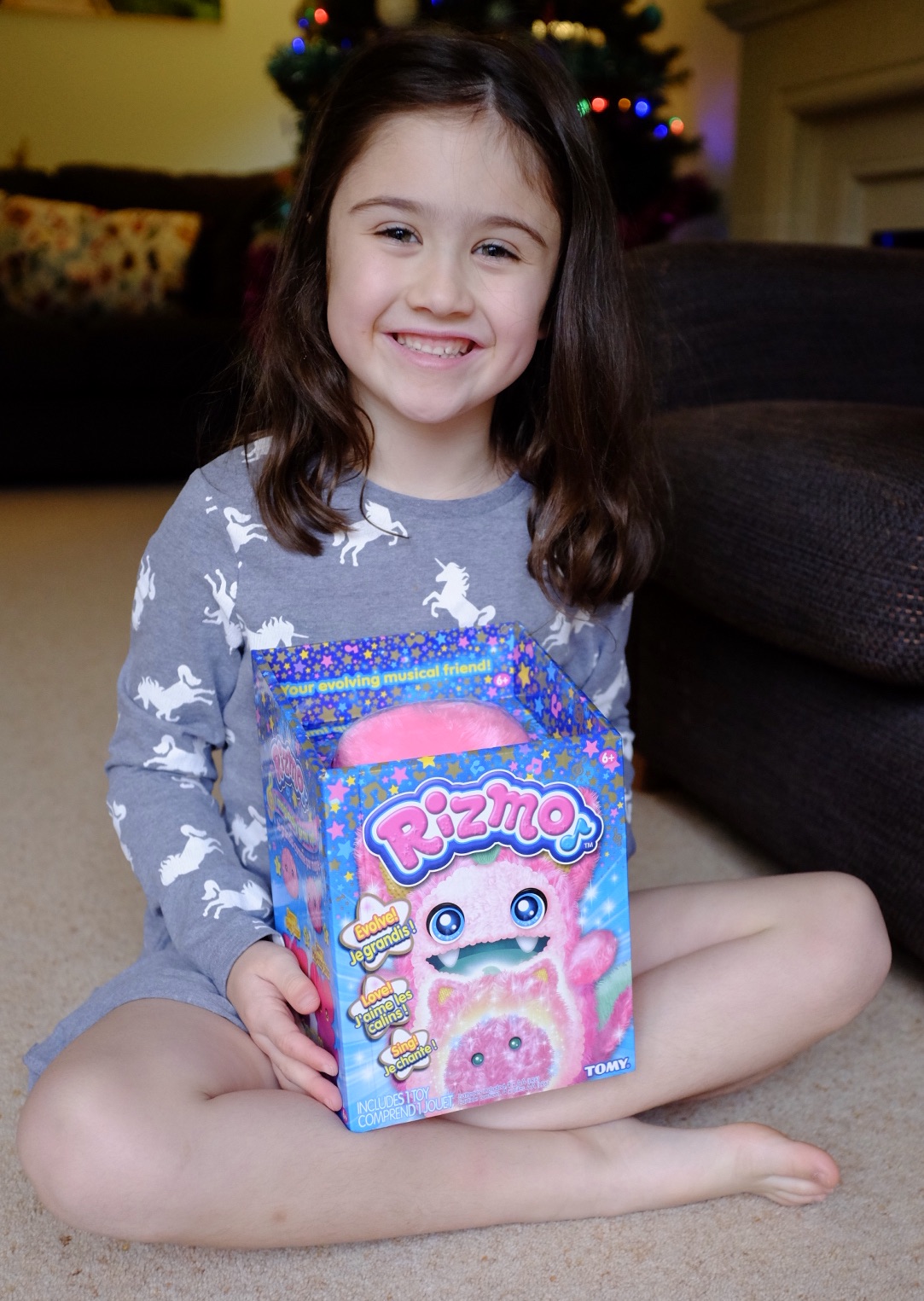 Currently Rizmo retails at £39.99 and is available at Smyths Toys, The Entertainer and Argos. I was also pleased to see that batteries were included too.

The Rizmo instructions are really easy to follow and I won’t go into masses of details but give an overall summary of what Rizmo can do. 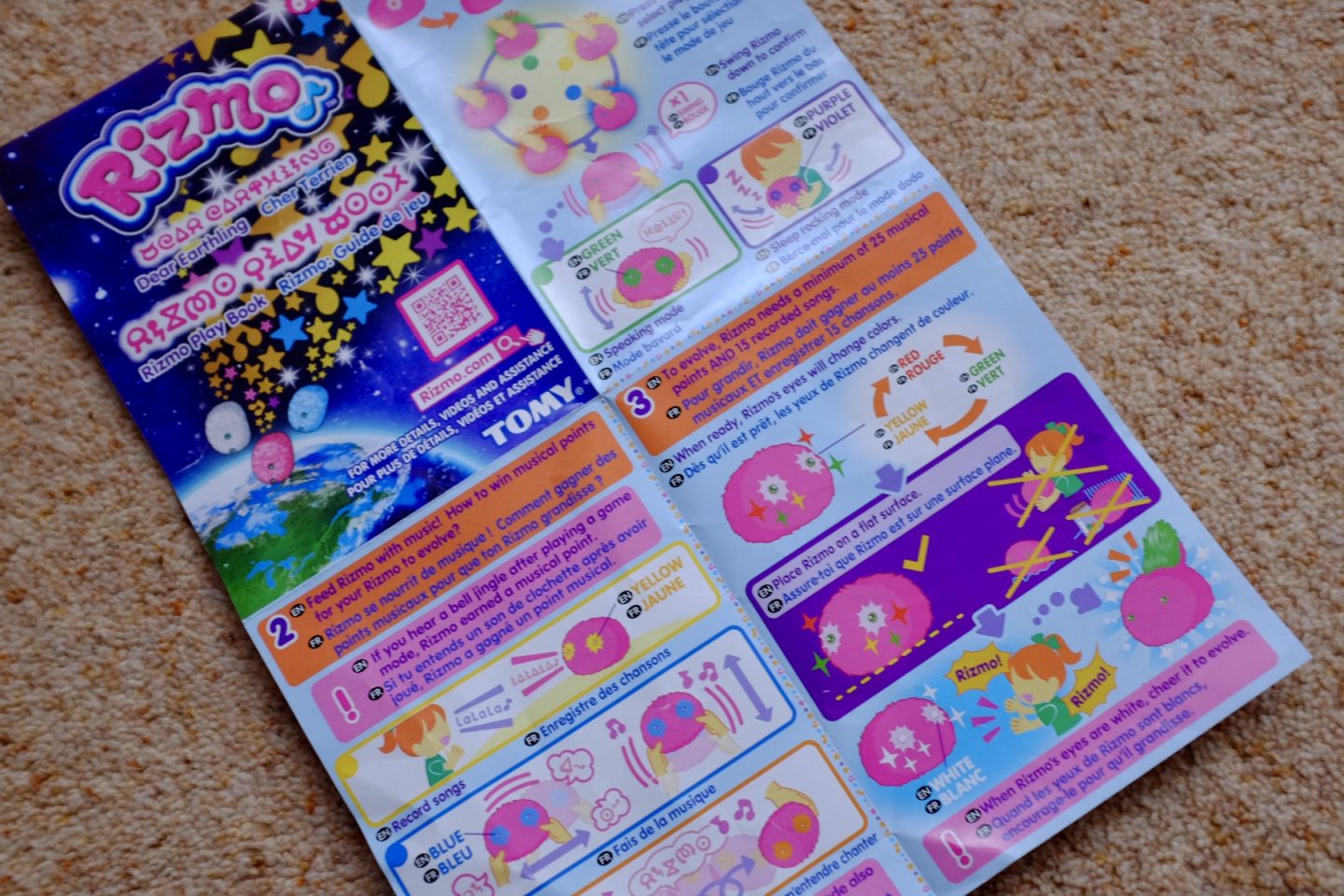 It starts as a baby, which looks like a large cuddle ball with coloured eyes. It is quite cute and it sounds very cute!! Obviously we wanted to start to make Rizmo evolve to a child and to do this you have to feed him with music. A bell dings after you have played a game so you know you have a musical point.

The Rizmo colours have different meanings. These are quite clear in the Rizmo toy instructions, he has an eye colour chart but here are some details below.

You press his head (it clicks so you know) and Rizmo’s eyes change colour. Green is ready to play and you can choose what mode. When on yellow you can sing to it and he will sing it back to you in a funny voice. 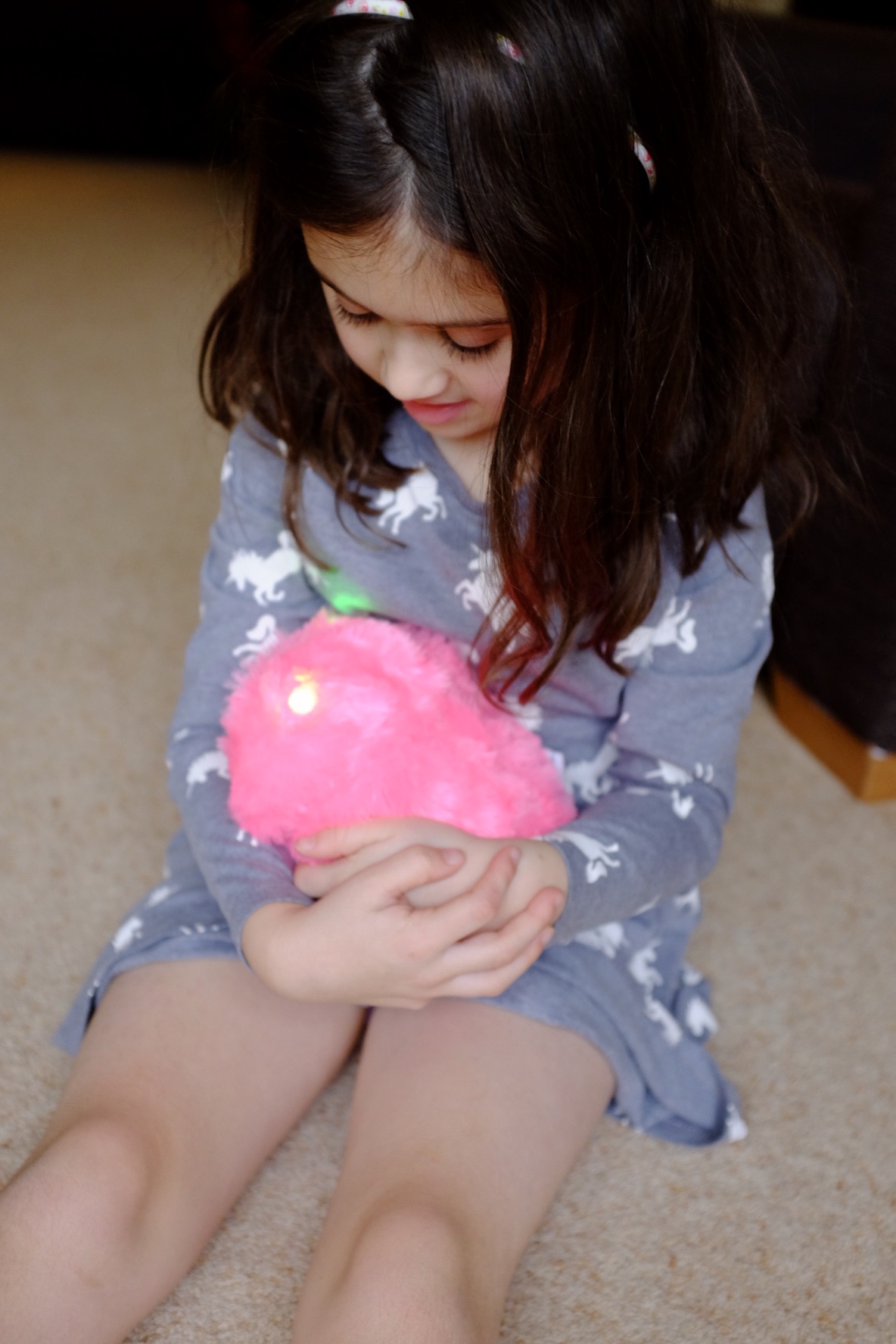 You can see from the below picture we actually had Rizmo the wrong way up!! We didn’t realise it should almost lie down for a little while when we were first playing with it. 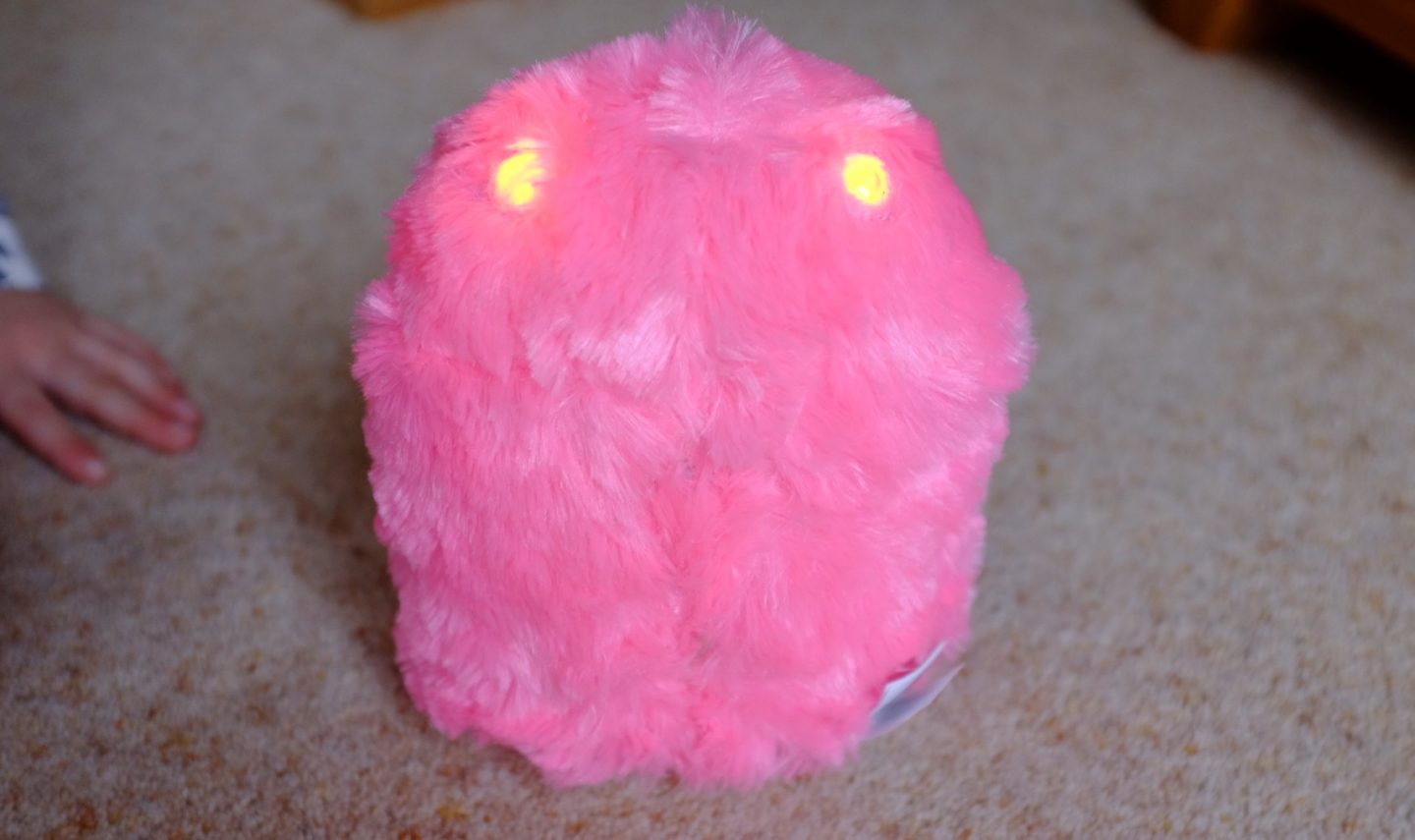 If the eyes are orange you can roll Rizmo from side to side and he sings. Purple mode is sleep mode and you can rock Rizmo to sleep and he very sweetly falls asleep. In blue mode, Rizmo makes music if you move him up and down. You hear different instrument sounds as you sway him.

After a lot of playing, on the second day Rizmo was ready to evolve! We knew it was ready as his eyes started changing colour from red to green to yellow. You have to place Rizmo on a FLAT surface, so we put him on the table. When the eyes are white we cheered and Rizmo evolved!!

Below you can see my actress daughter (!) with a toddler Rizmo. He now has a green tail! 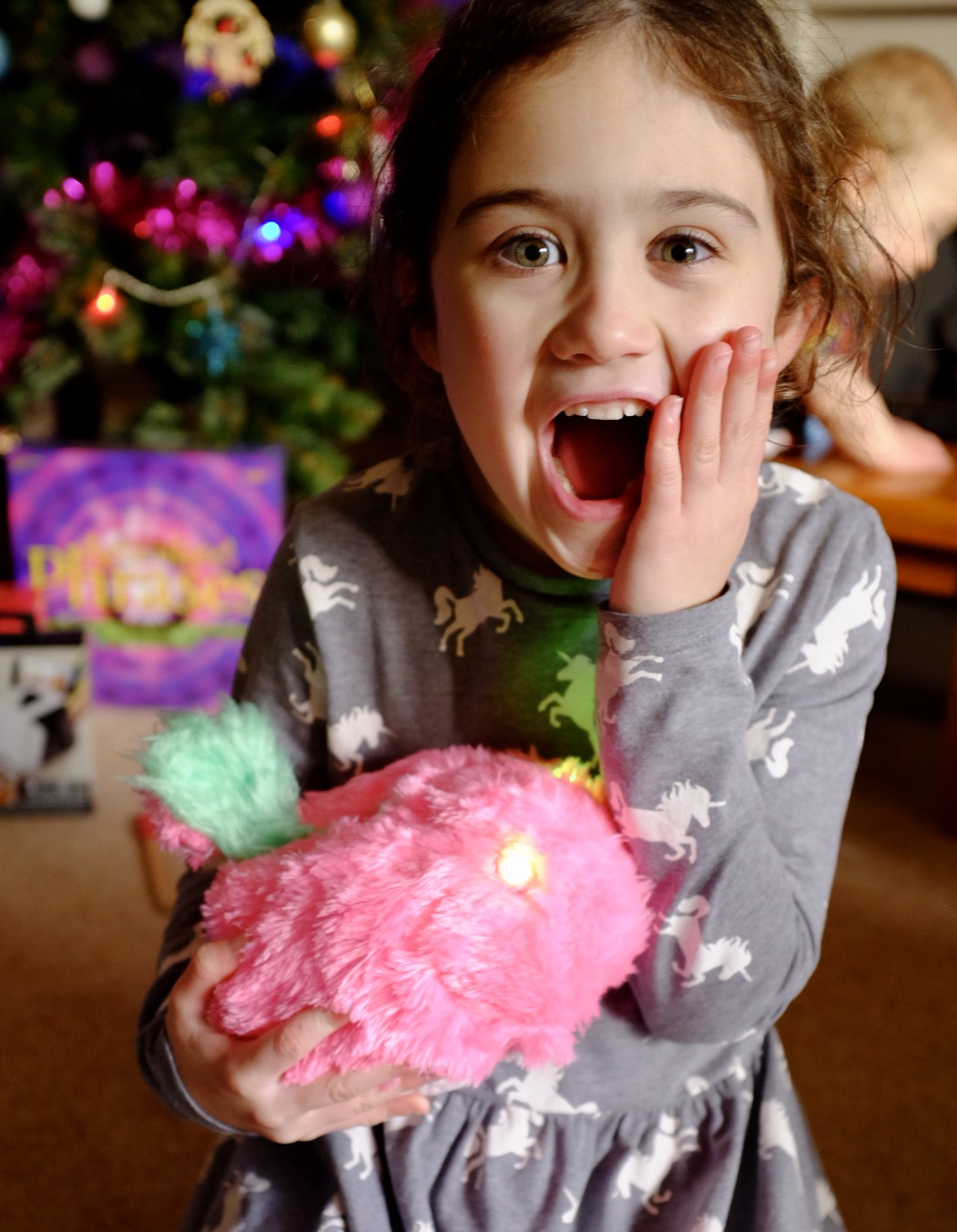 We left Rizmo for a little while and me and her younger sister (who is three, fully supervised) to have a play and try and evolve Rizmo to an adult. You repeat the same stages as above to get Rizmo to evolve again. 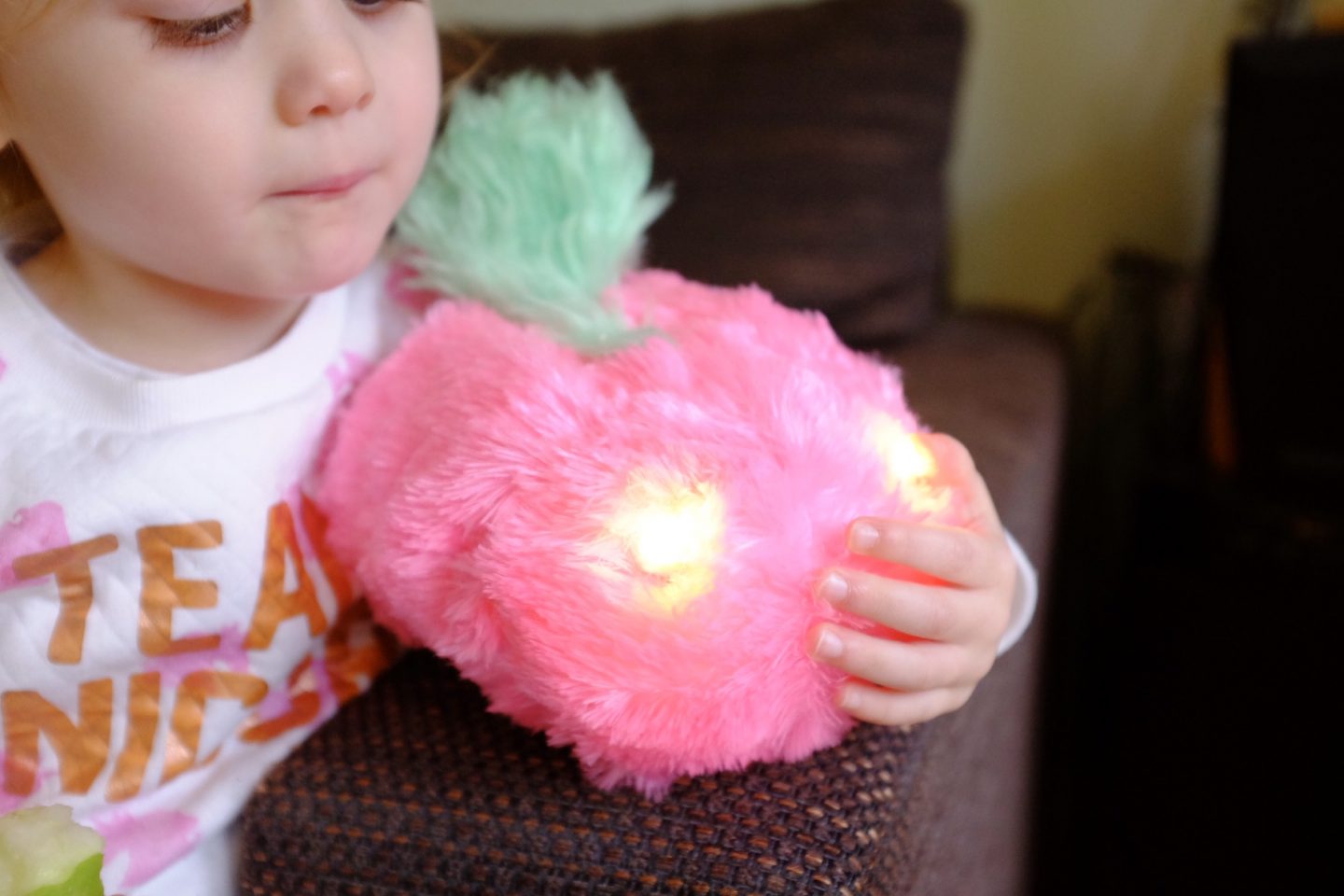 She was fine to play with it, as I explained she couldn’t pull any of the parts and she had to be careful. She was fully supervised and we managed to evolve Rizmo again to the adult form!

He looked so cute and once again we were pleased we could follow the instructions to play with Rizmo again as an adult. He does the same things as when a baby and toddler but unlocks two other things! This time his belly is the colour to indicate what to play, not his eyes. 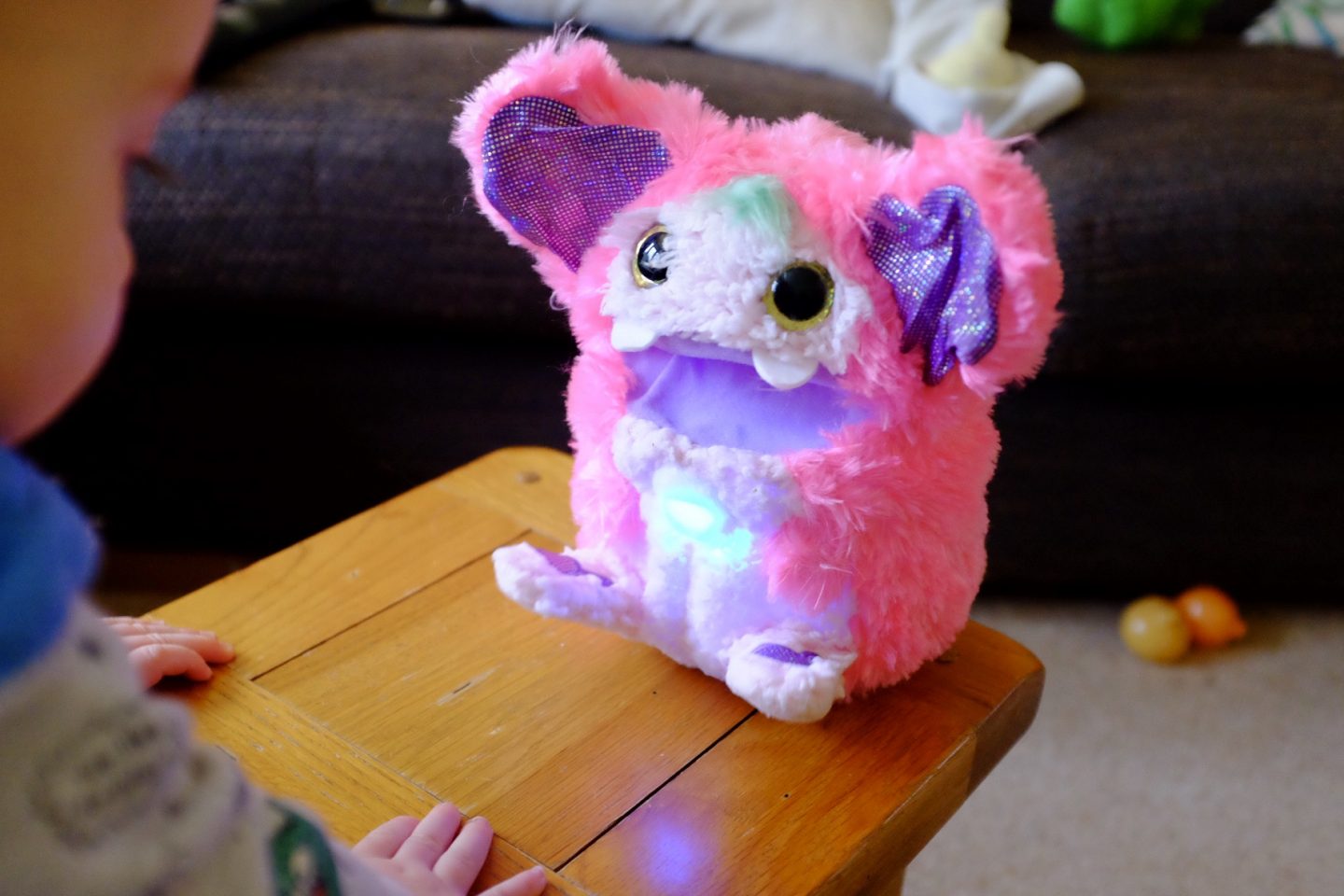 Rizmo has a pink colour and will dance to music! I wasn’t sure if this was automatic, as he started to move and dance before the music was on however.

You can also play a game when his belly is blue. Move him side to side, up and down and clap and his belly will change colours, depending on what you do.

Rizmo also gets moody when you ignore him. This was pretty funny, as we were watching a film and suddenly he started making all these crazy noises! He looked and sounded sulky! We had to press his button a few times and give him some attention to snap him out of it!!

We also noticed in all modes, Rizmo breaks wind and this made us giggle a lot! He also says “bon appetit” and my middle girl found this hilarious! 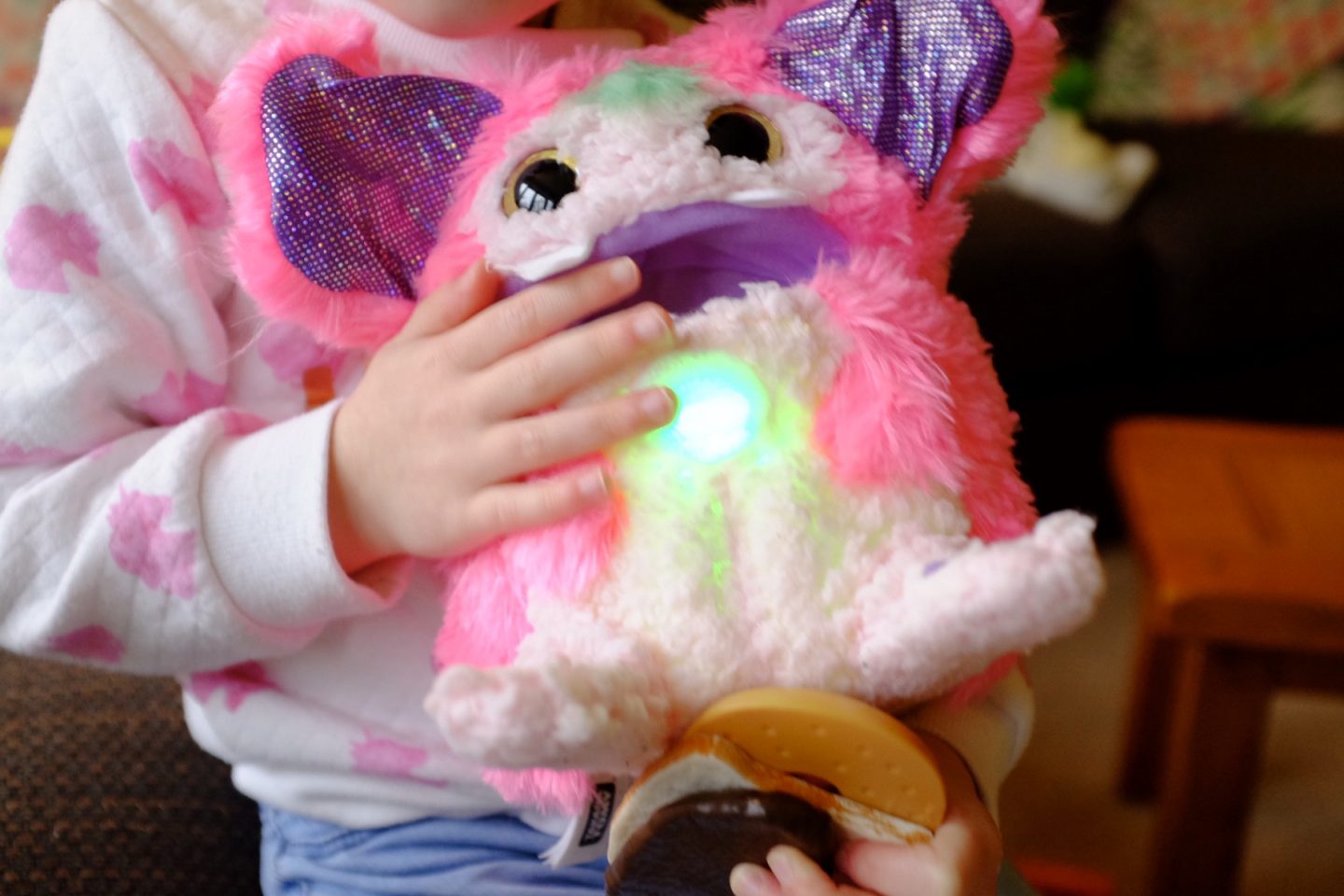 Can you Get Rizmo Back to Baby?

The answer to this question is no. We did wonder this but once he has evolved he is an adult and that is that.

I was impressed with Rizmo, as I found the evolving side of the product really original and unique. It also took a long time for each evolving stage. You have to record at least 15 songs per stage and get 25 musical points (you hear this when you get one). My eldest and I sat down to test him and we actually didn’t get him to evolve until the next day! It took another day before we moved from toddler to adult.

I liked this as sometimes the novelty of a toy can wear off very quickly. This prolongs this a little and ensures the excitement continues for a while. However, my eldest said whilst I was writing this, for her it took a little long! You will need to help your kids and get them to be patient.

The instructions were very clear and it was great to see a toy that actually worked and did as the instructions said! It also has different modes, as discussed depending on the eye colour but this wasn’t excessive, so it wasn’t a toy that was too complicated.

My eldest found the baby so cute. She loved the sound of its voice and wanted to cuddle and love it. We also had a little giggle, recording silly songs and listening to Rizmo play them back to us.

It is tempting to want to pull on him when he is a baby and toddler as parts of him move but don’t open but the instructions says really clearly, do not do this!! So we didn’t. We waited for him to evolve. I think the adult form of Rizmo is really sweet and I liked how he danced and moved about. I quite liked his little sulks too, as he seemed like a little child getting stroppy!! Makes him quite endearing.

It’s a little bit of a shame he is recommended for kids aged 6 and over but I can see why. You have to be able to listen to him and follow instructions and he is delicate. I had to explain firmly to my excited 3 year old, not to yank on his legs and ears before he had evolved.

Overall I liked Rizmo. He worked! He’s original and at his current price, he is worth that. He has a lot of loveable characteristics and can be cared for. I like the musical side, as allows children to be creative too.

I think he will bring a lot of fun this Christmas! 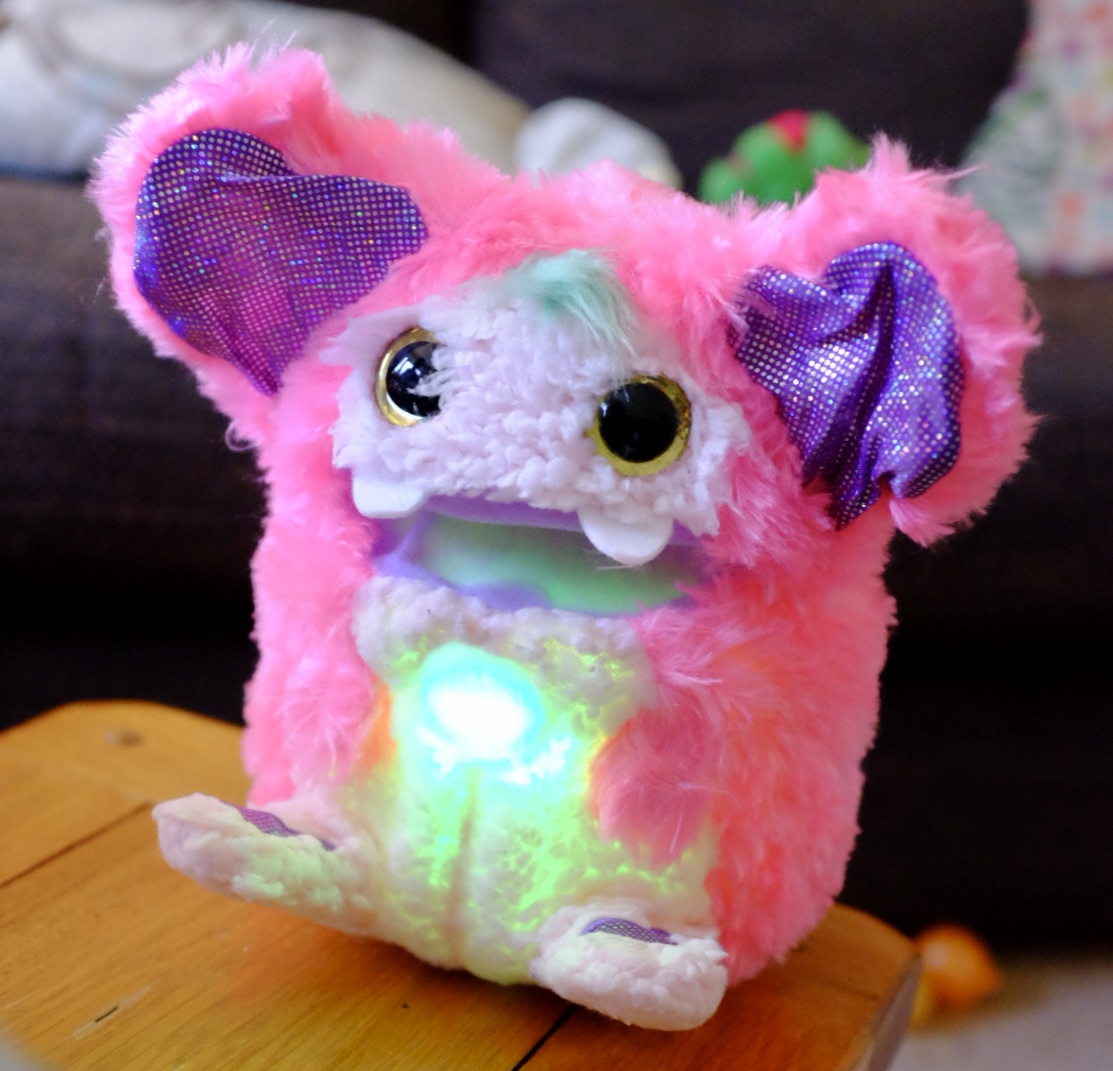 If you want to check out some of our other Christmas product reviews for some inspiration, have a look here: