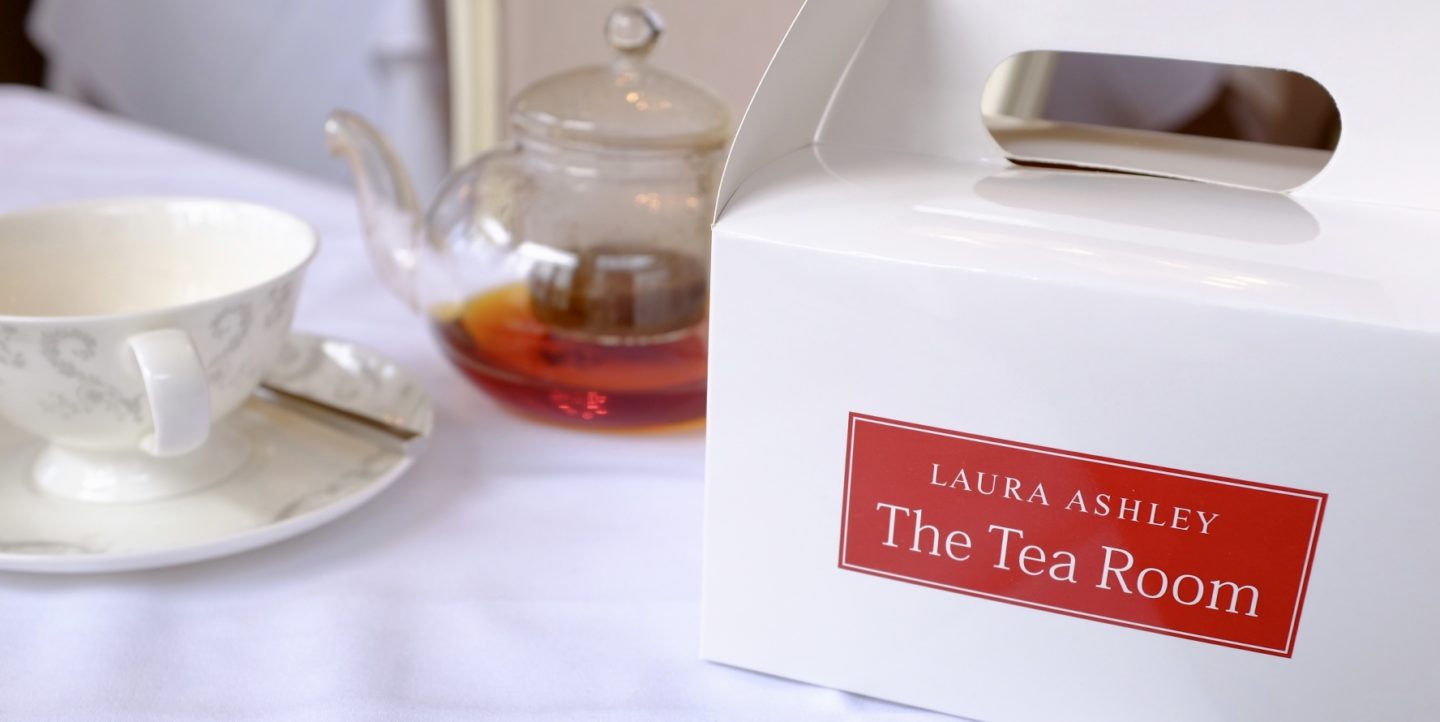 AD – I adore an afternoon tea and when I was asked to review a local one by Laura Ashley hubby and I jumped at the chance. This opportunity was organised by the Coventry Bloggers Facebook Group. We were going to review their new vegan afternoon tea plus their non-vegan variety. No alcohol as I was breastfeeding and hubby driving.

It was funny as we were supposed to be taking the gremlin along in half-term but her brother appeared the day before! I was kind of glad a little, as she can be so loud and it was a lovely calm place to go to.

So with a newborn little guy we headed over to our local Laura Ashley The Tea Room which is located on the Stratford Road in Shirley, Solihull. 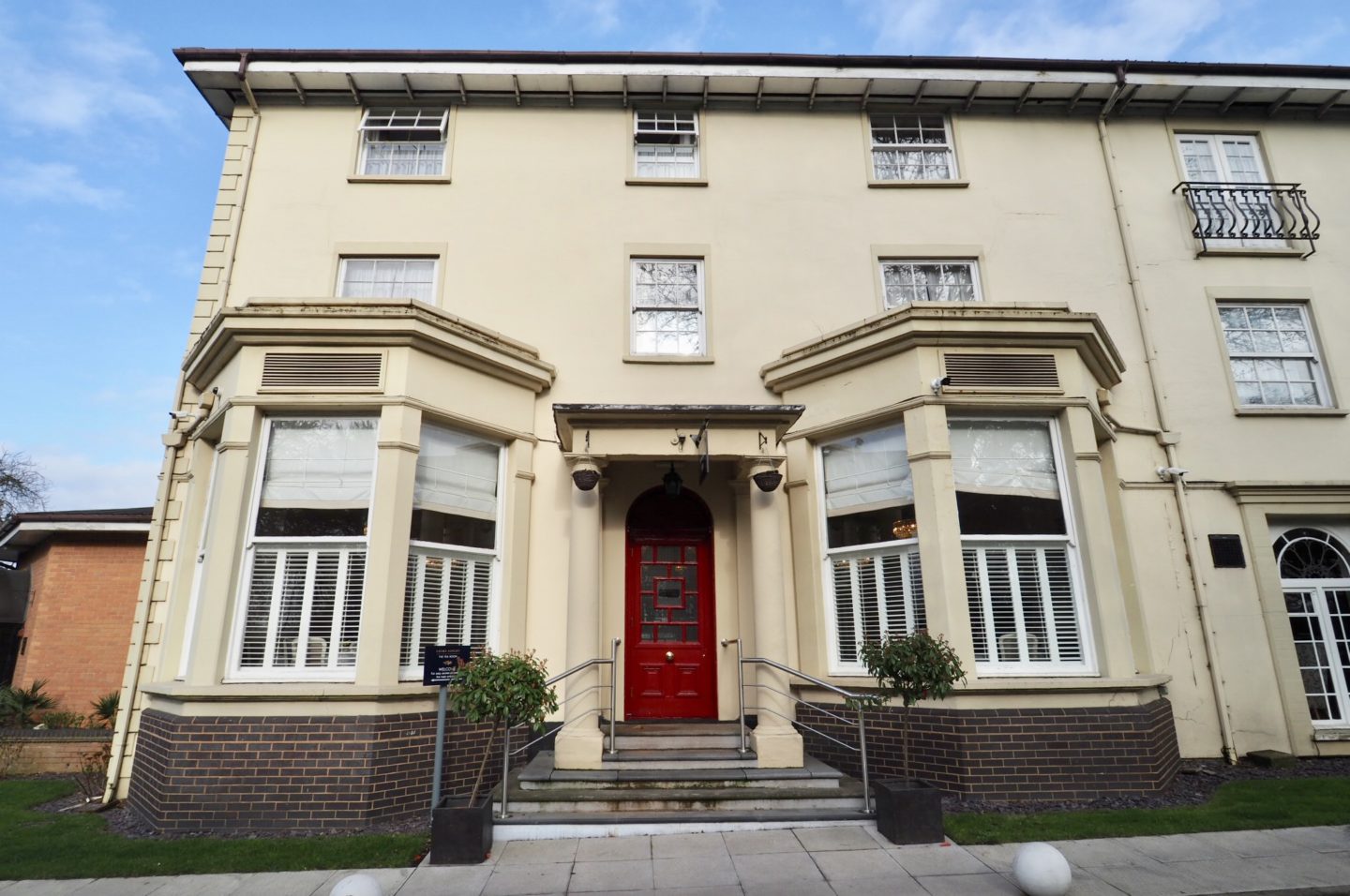 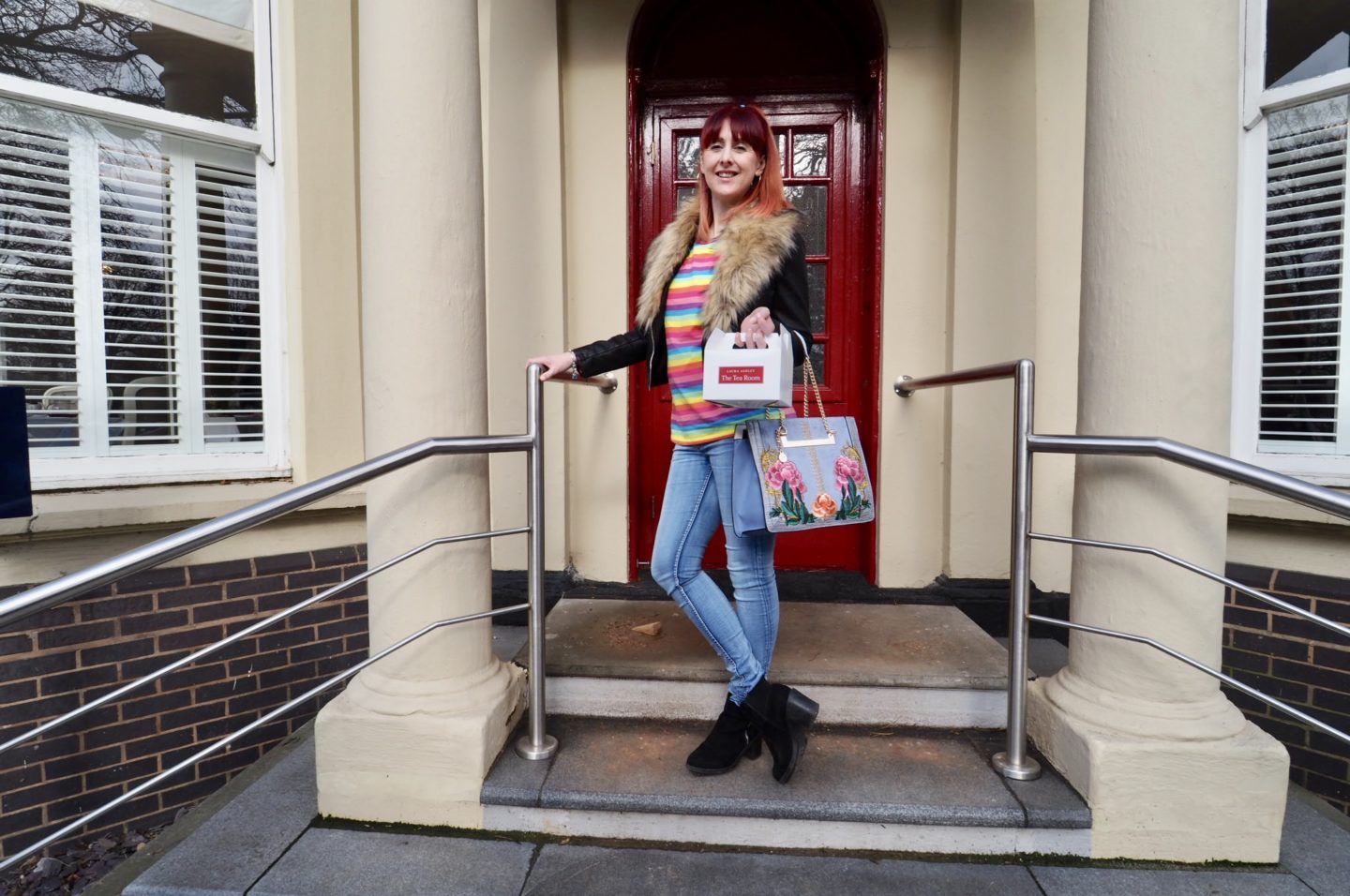 They are open Monday to Sunday 10am-6pm and you can book online or over the phone.

You can see what is included from the pictures below: 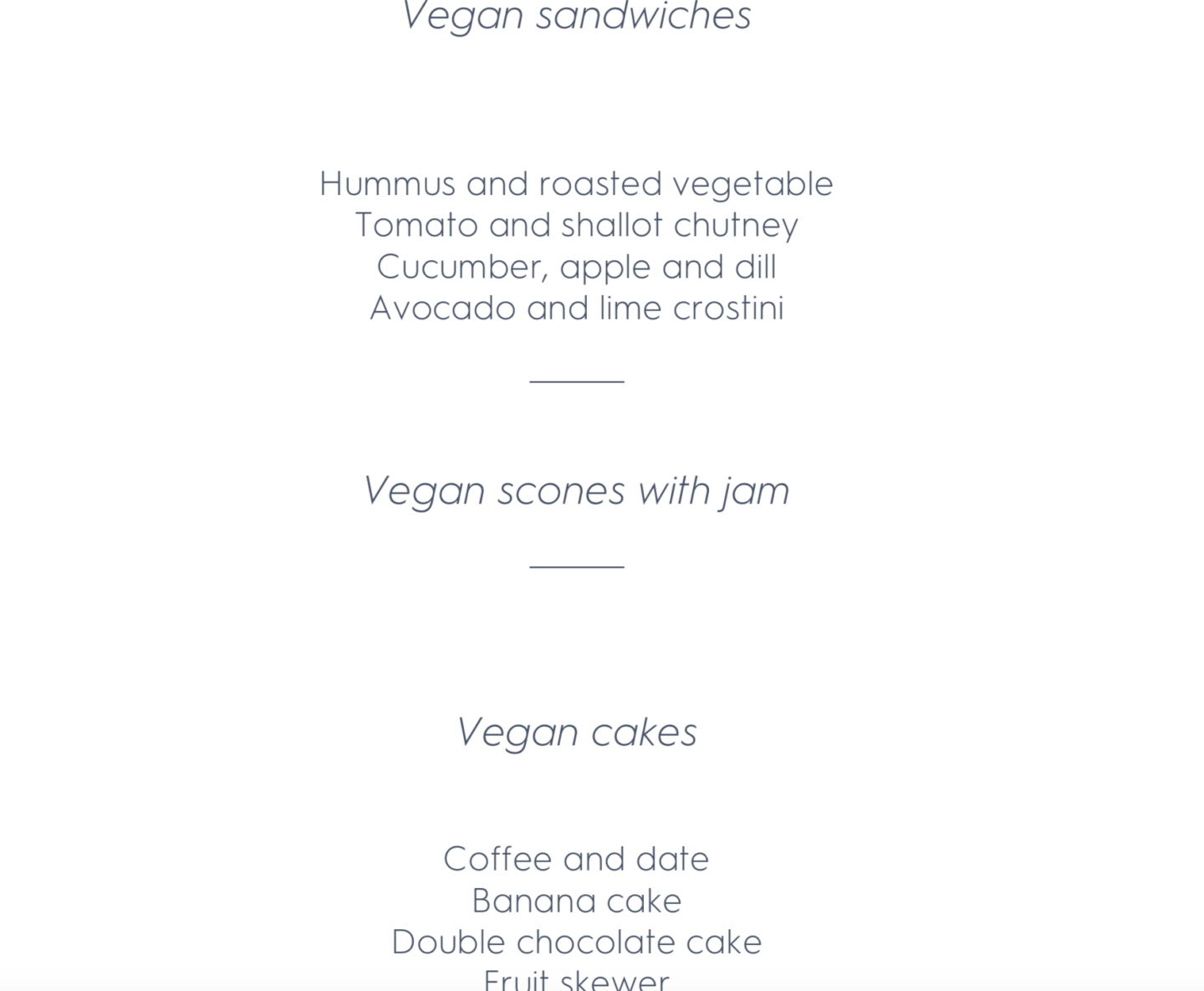 The cakes do vary at with the menus, as we had different items.

There are other options too, like champagne and Prosecco afternoon teas and you can pick just a sandwich if you don’t want the works. There is plenty of choice. 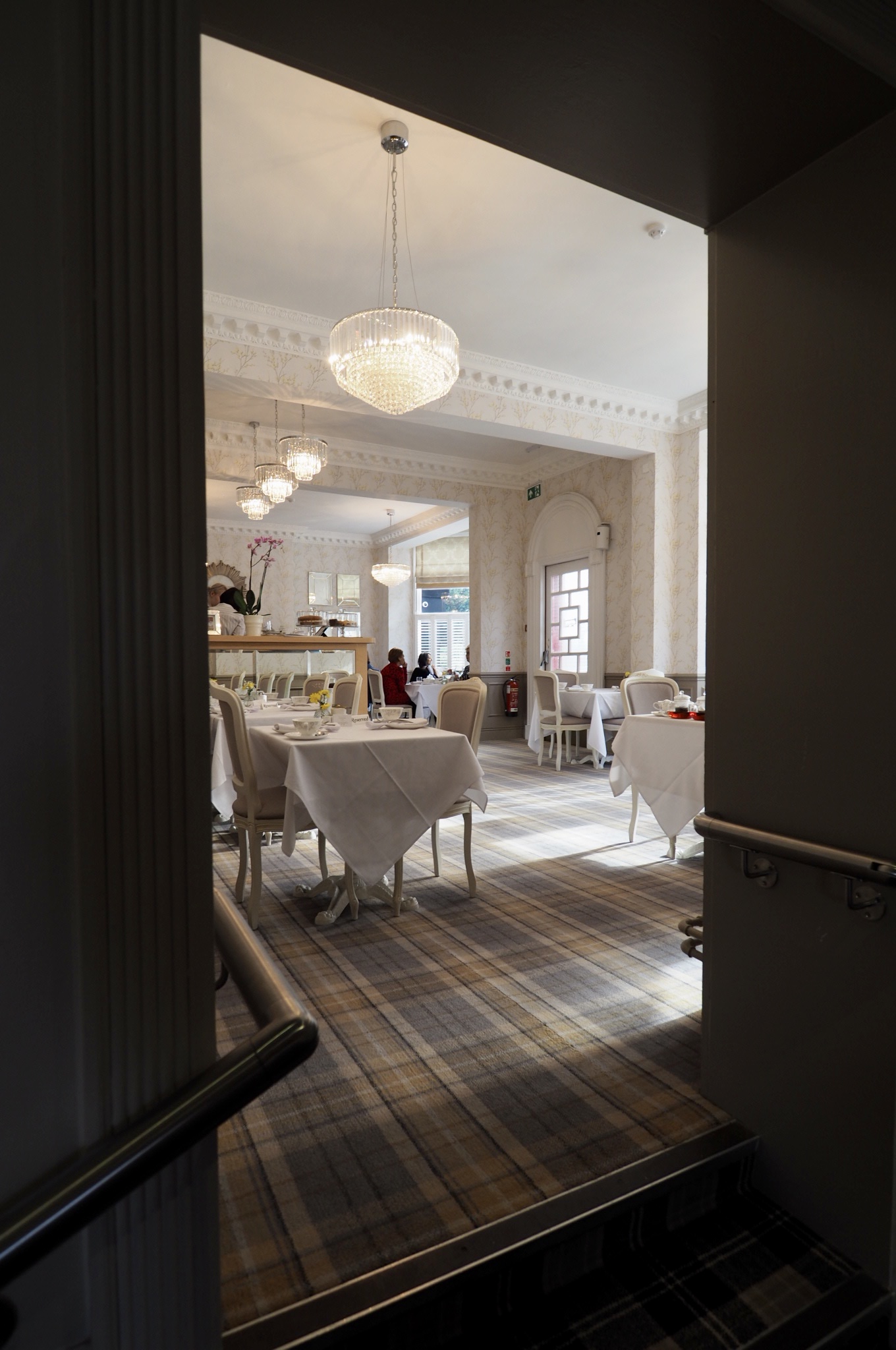 We were very lucky that the little guy slept all the way through out afternoon tea, so we could chat and really enjoy it.

We were brought lovely pots of tea to start with and these were refillable. 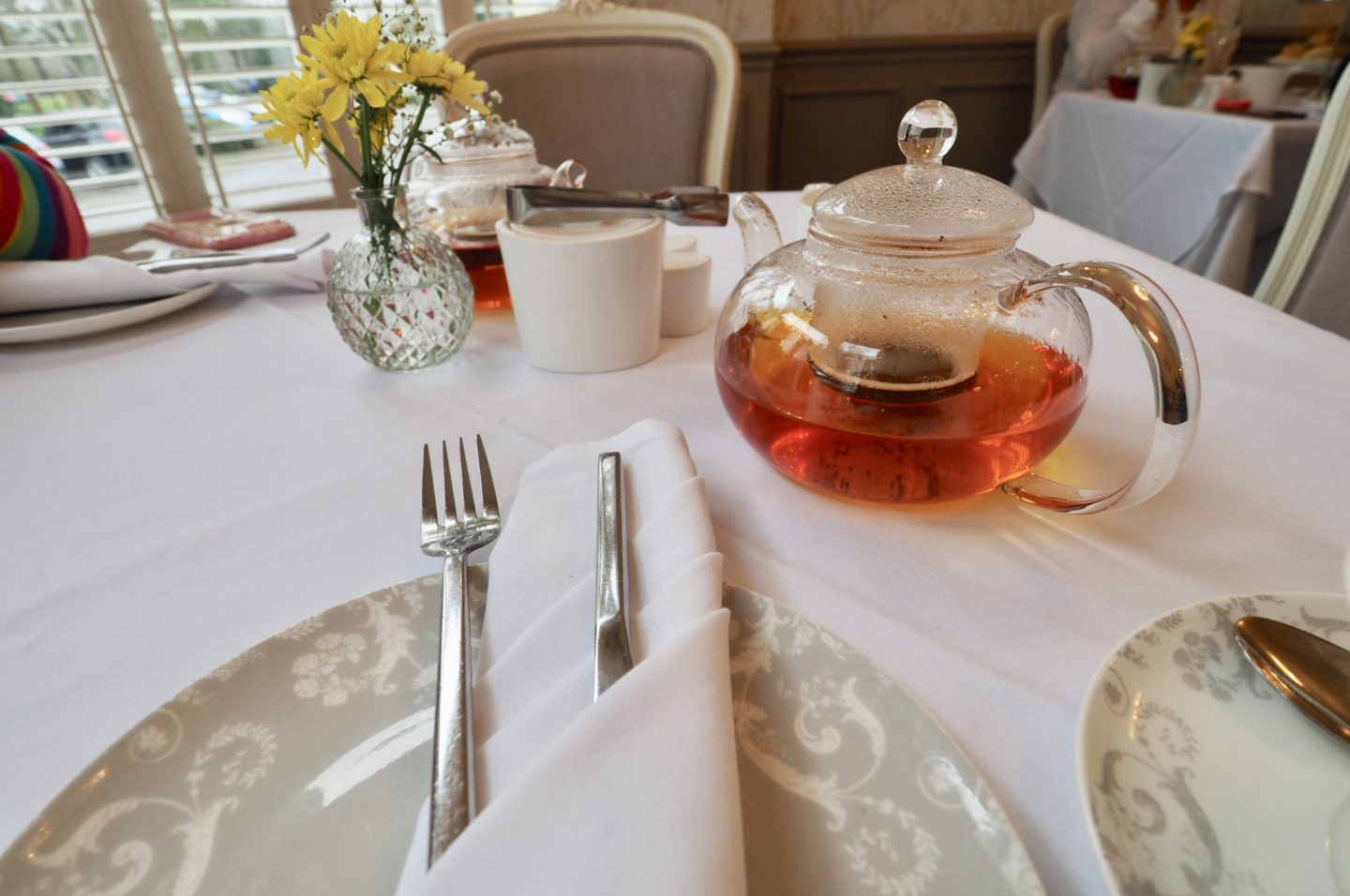 Then we were brought small cups of soups to have as a starter. On this day it was celeriac, shallots and thyme. It was lovely and a perfect amount to start off an afternoon tea; not too filling. 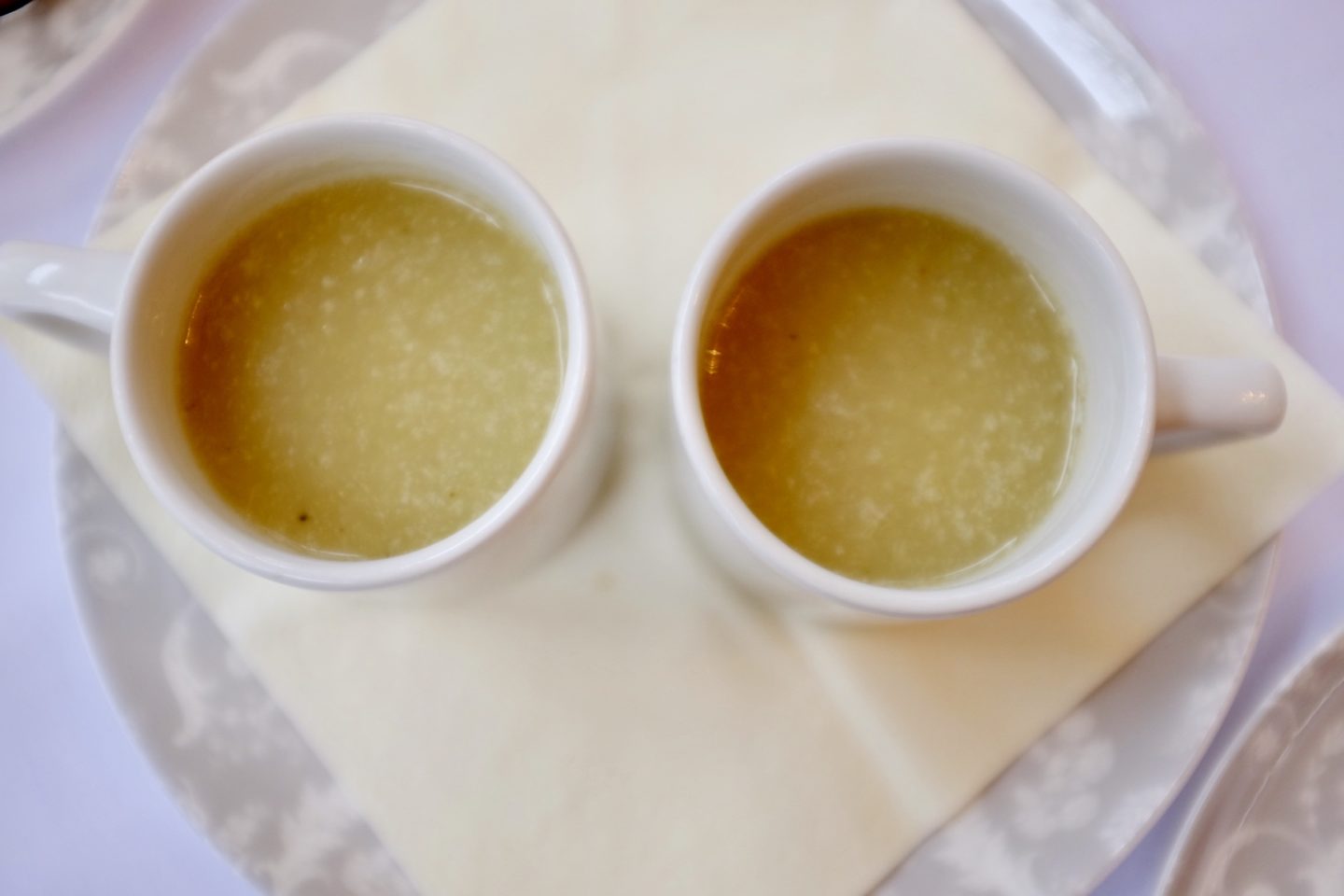 We were then brought our afternoon teas! Sandwiches were re-fillable too, which my husband took great advantage of. 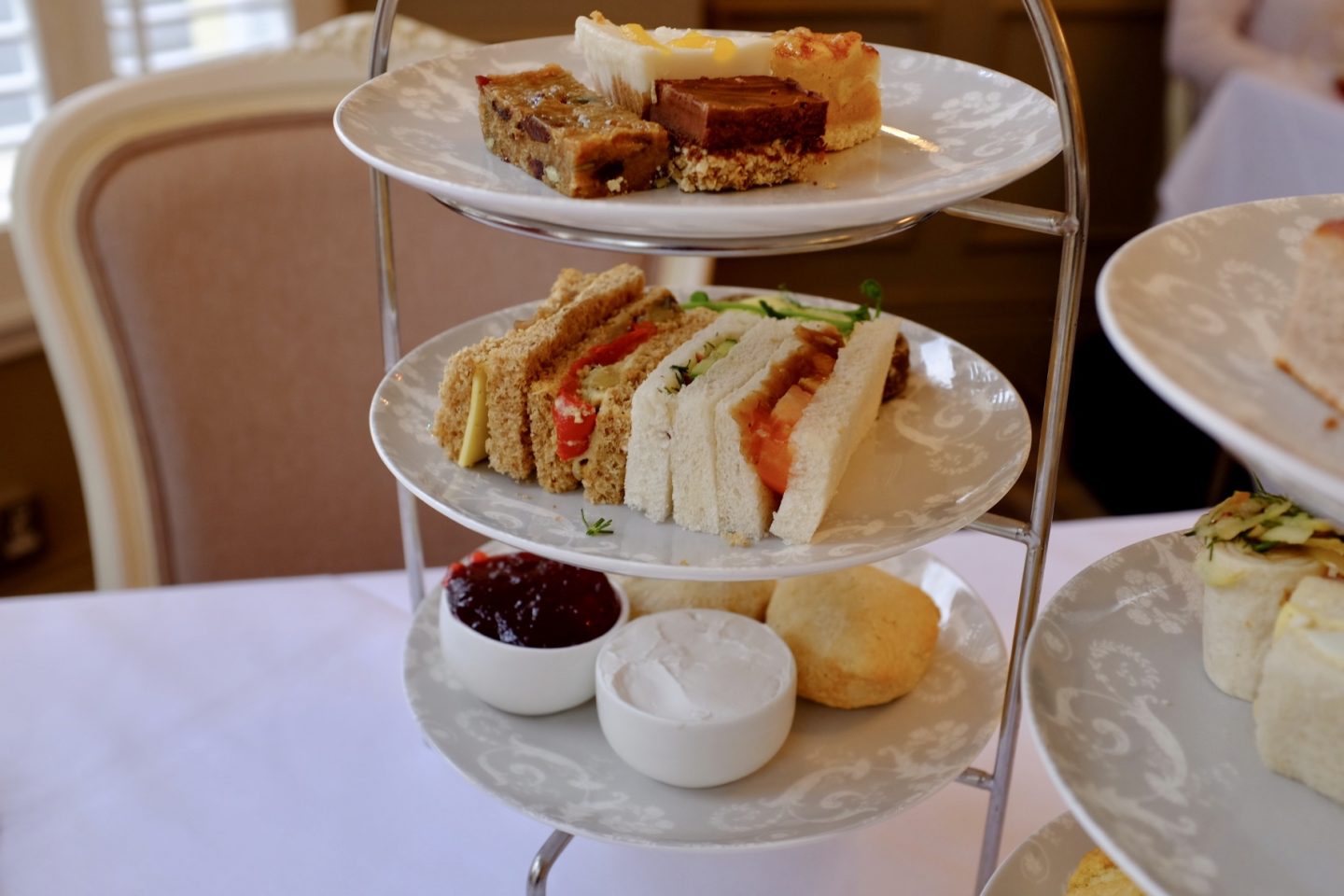 I have to admit I wasn’t sure about having a vegan afternoon tea, as I’m not a vegan! However, I was really impressed. The hummus and roasted vegetable sandwich and tomato and chutney option were delicious. We did quite like the vegan cheese too, which surprised me.

The vegan scones were pretty tasty. They came with a coconut cream and jam. I tried this and it was nice and an alternative to cream but I’m a fan of coconut. If you weren’t you may not like this.

The cakes are variable but we had a chocolate and coconut one, a mini flapjack, a lemon cheesecake-style  cake and an apple flavoured cake. We tasted and enjoyed all of them! 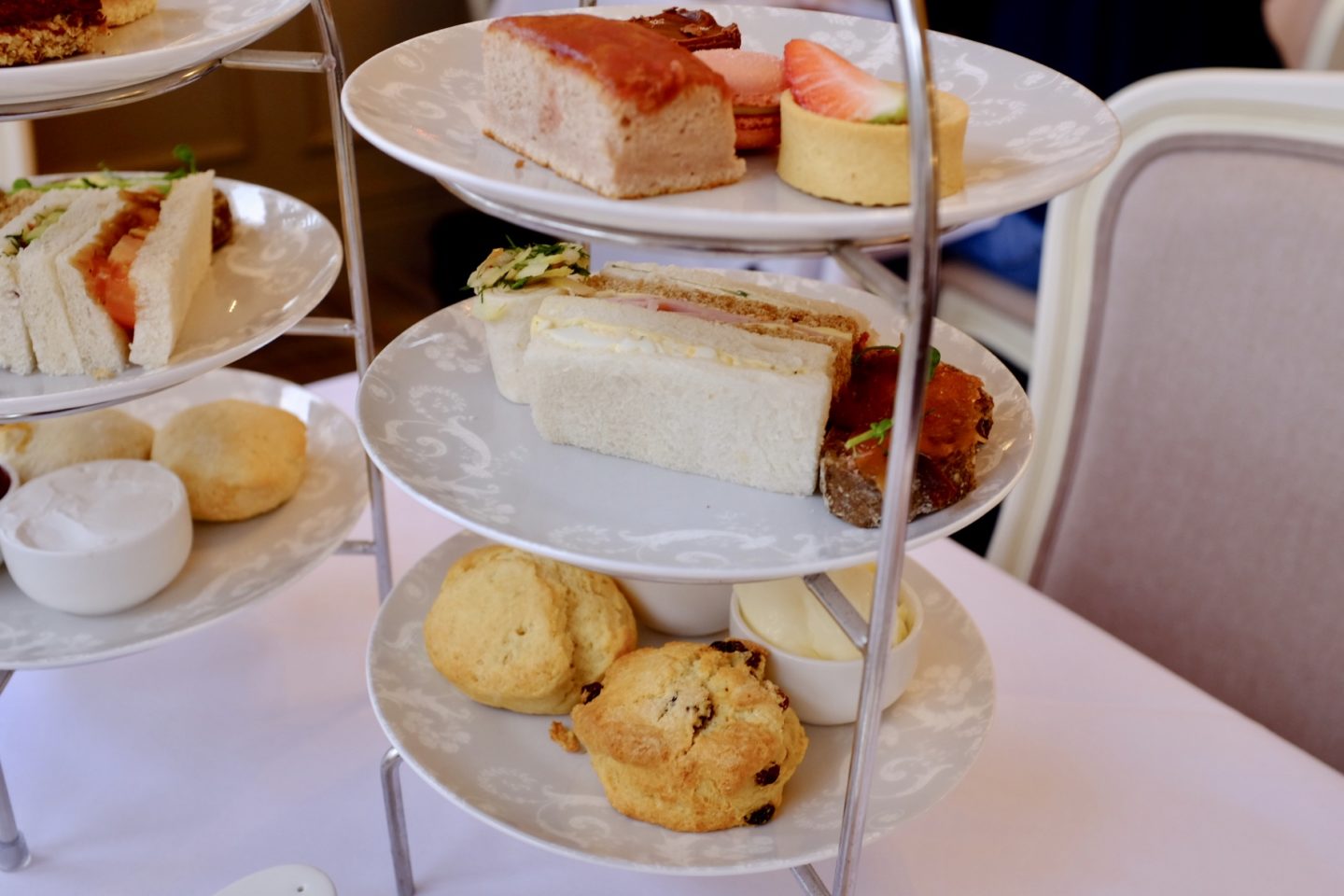 I actually preferred the vegan sandwich choices to the non-vegan options! I stole the egg sandwich twice and enjoyed the smoked salmon and dill but I’m not a ham, cream cheese or liver pate fan, so hubby had these. He said they were delicious though and you could ask for what you wanted with re-fills.

The scones, cream and jam were amazing though and I enjoyed this the most, as I am a bit obsessed with scones! It’s the cream.

We had the same chocolate and coconut cake, as the vegan afternoon tea, a macaroon, a mini passion fruit tarte and I can’t remember the final one but they do vary! They were all delicious but we did have to take some home, as the second round of sandwiches meant we were full. Depends on how much you can eat but I think what you are originally brought out with is enough. We did re-fill our teas though, as I now love having a bit more freedom on my tea intake, as not pregnant anymore.

The size of the cakes was perfect though, small enough to have a taste but not be too full!

Here are a few more photos. 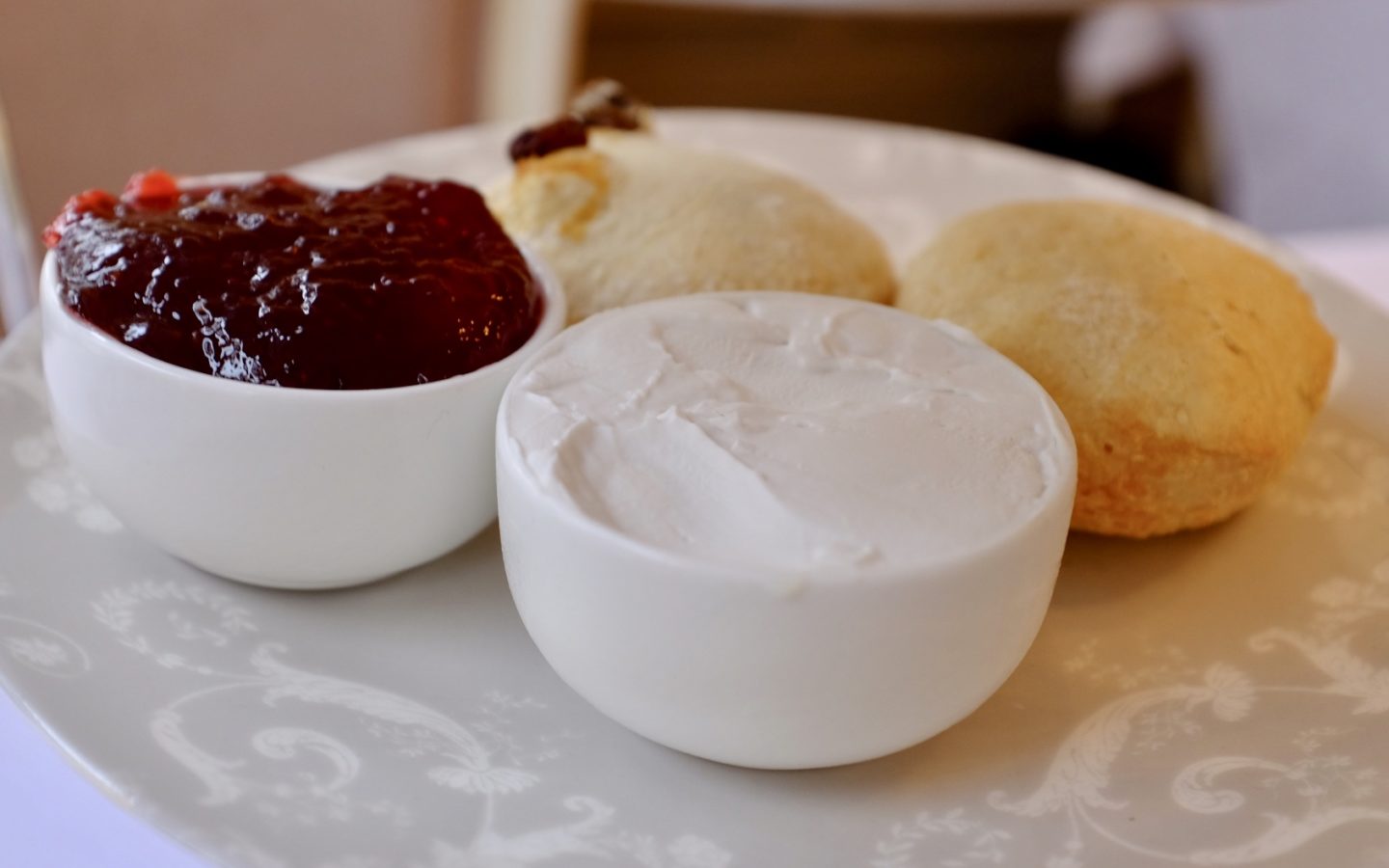 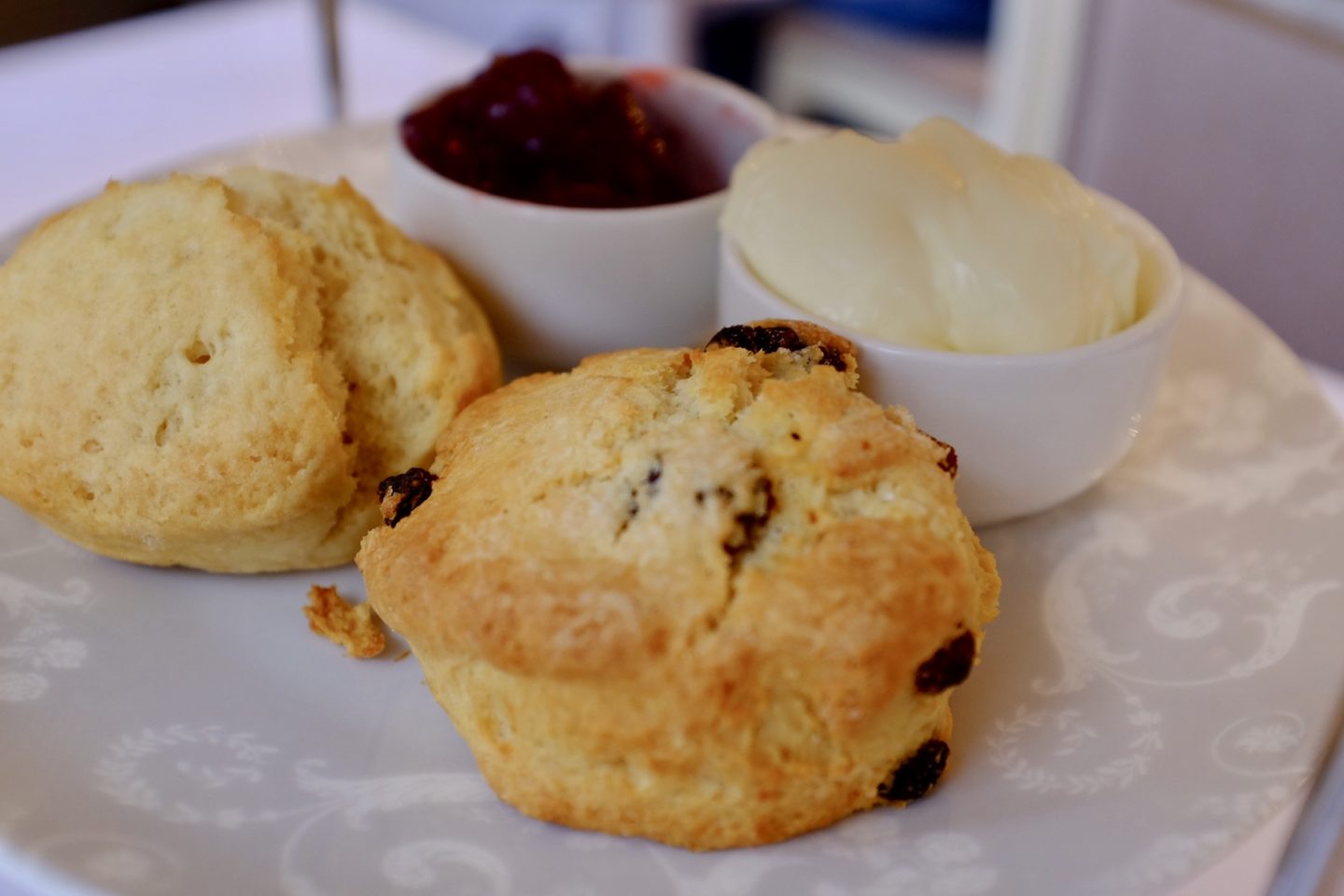 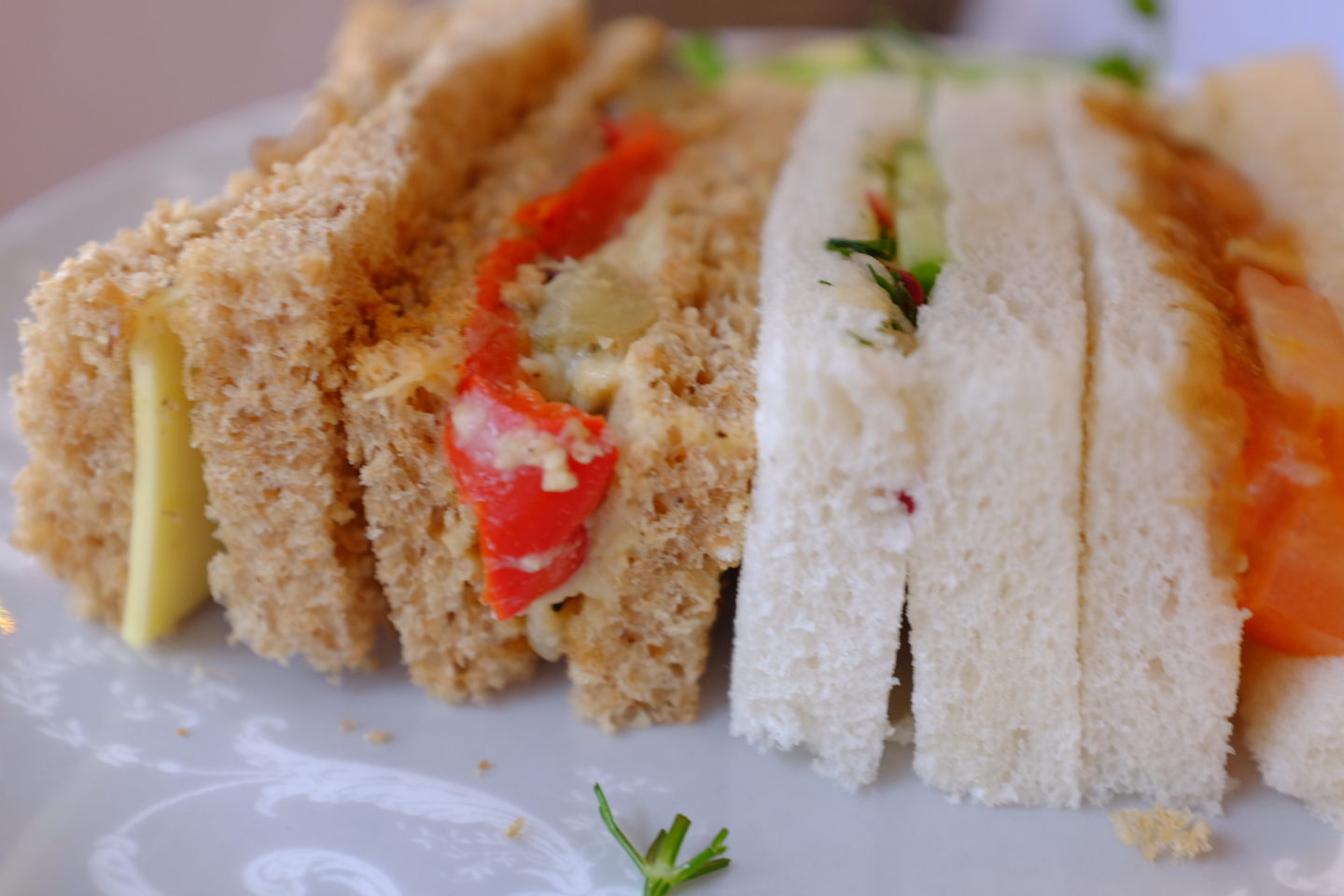 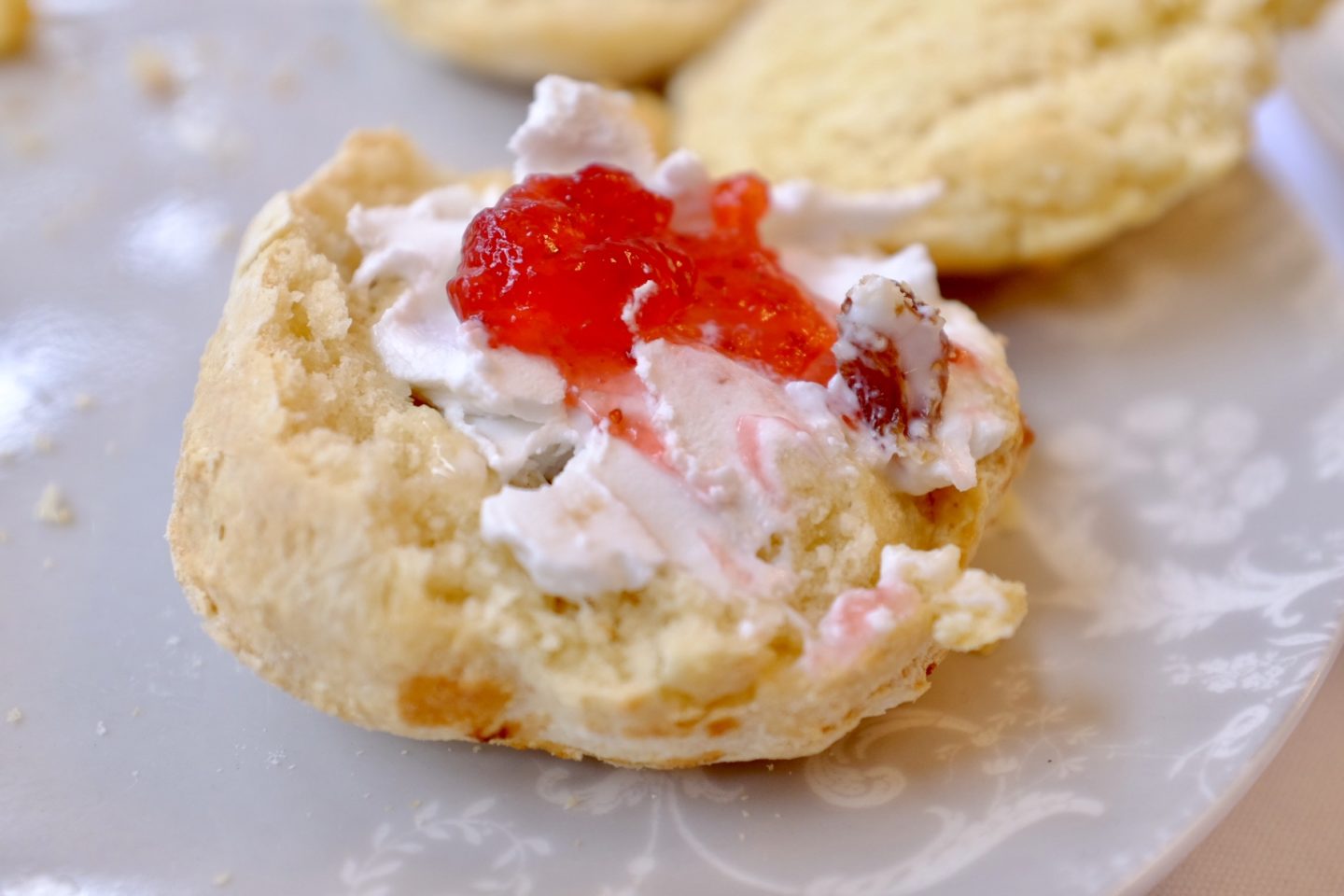 We were probably at the tea room for 90 minutes to 2 hours and thoroughly enjoyed our experience. The tea room was beautifully decorated and had a calming, peaceful atmosphere. The staff were really friendly and attentive, asking if all was ok and if we wanted re-fills.

Hubby and I could chat and take our time. 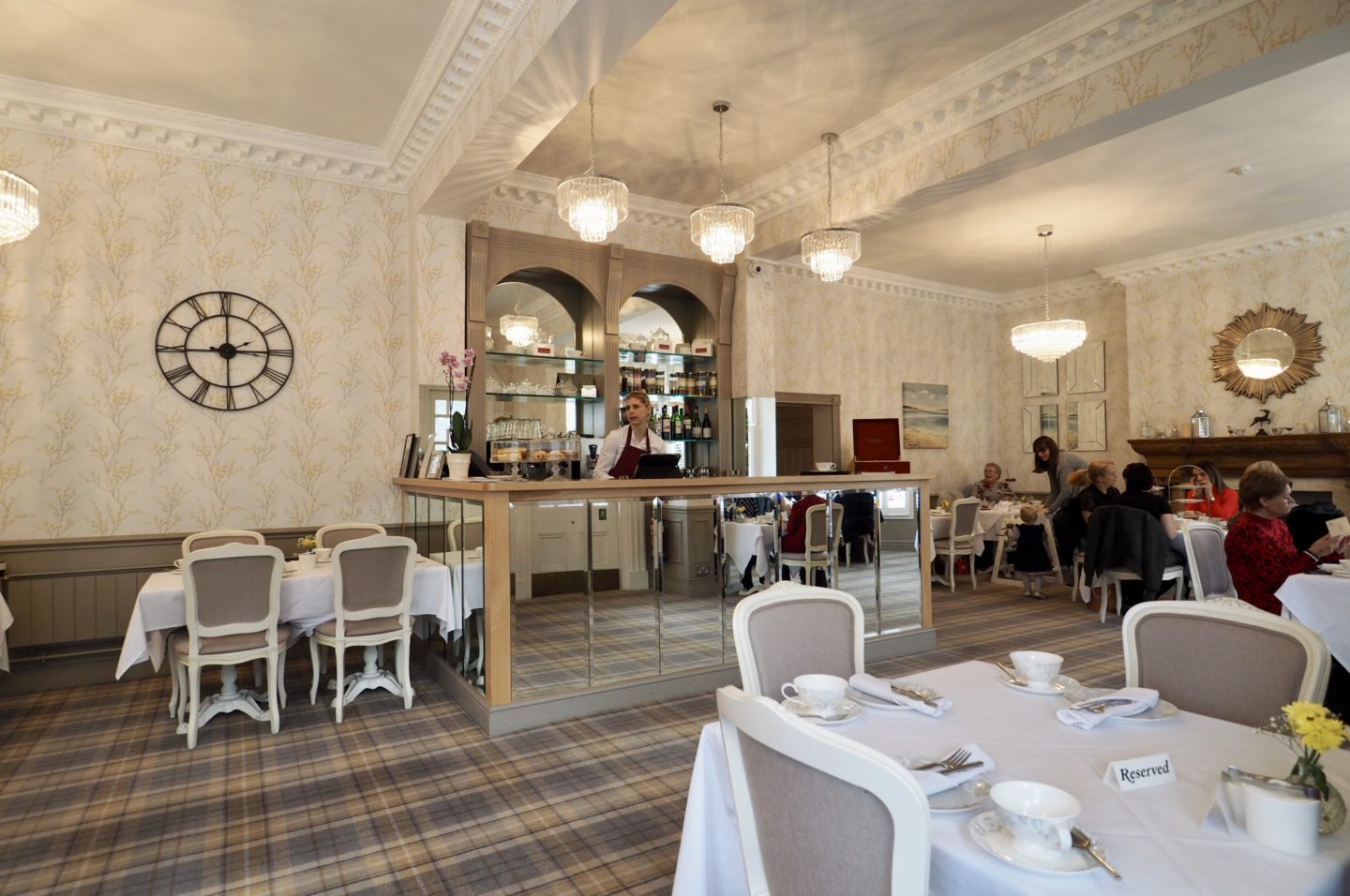 I was comfortable enough to feed the little guy when he woke up too. 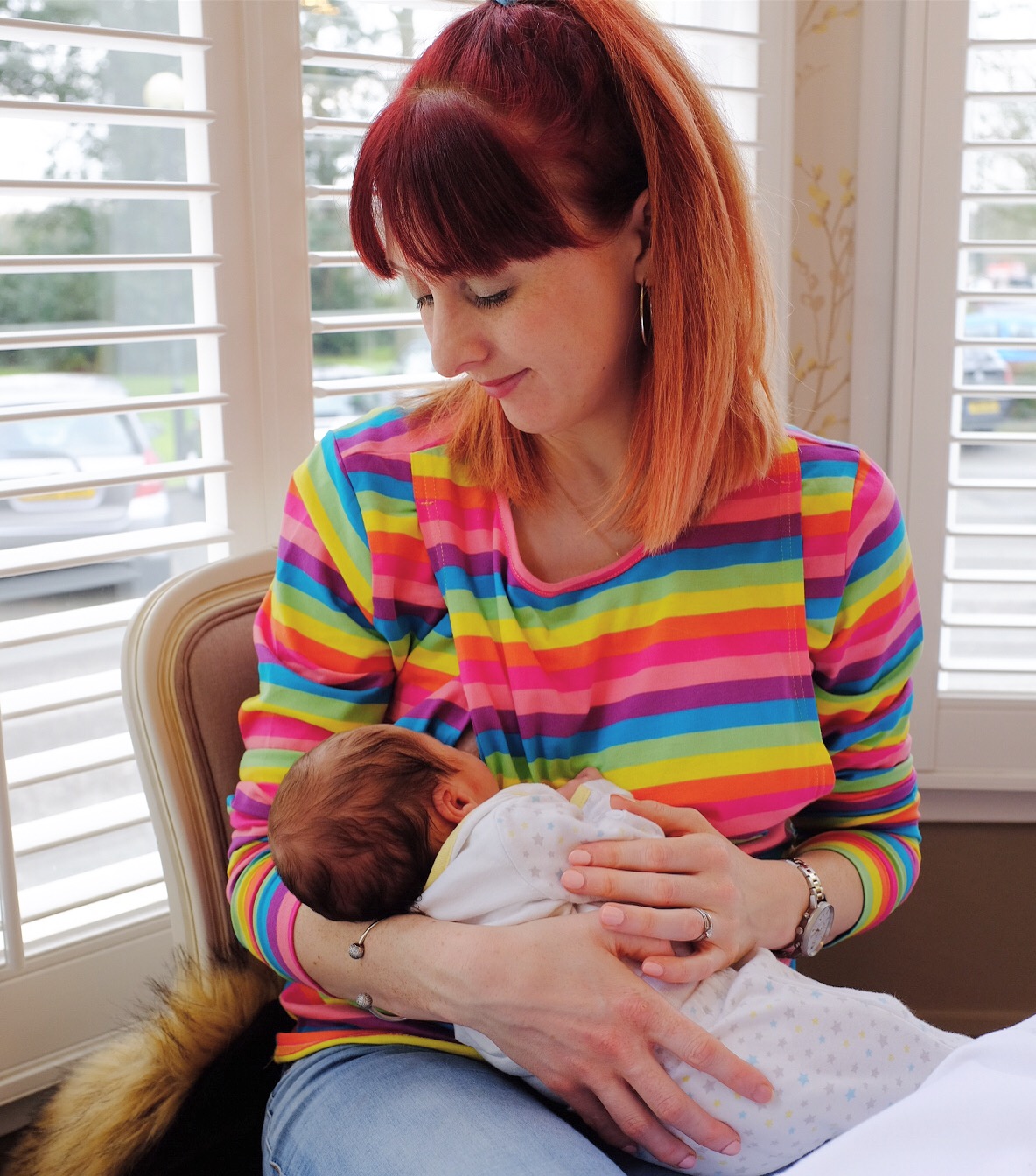 The food, especially the vegan sandwiches were great. If I was a following a vegan diet, I would have been happy with what Laura Ashley provide in their afternoon teas. It is tasty and well-worth it.

Hubby really enjoyed the non-vegan afternoon tea, especially the second round of sandwiches! It’s great to sample so many different sandwich fillings in perfect portion sizes.

Price-wise, I thought reasonable for an afternoon tea. The location and environment was lovely and well worth it for a treat.

Hubby and I have said we would go back another time for sure and we would recommend.

Disclosure – we were provided with this afternoon tea from Laura Ashley in return for an honest review. All thoughts and opinions are our own.